There has been a lot of talk about the Aimpoint ACRO changing the MRDS game. When I got my hands on the ACRO, I was impressed enough to buy one to hammer out an Aimpoint ACRO review. I needed to know if it was as good as I thought it was.

Shooting The ACRO For The First Time

My first interaction with the Aimpoint ACRO was at Shot Show 2019. Up to that point, I had less than 100 rounds each through a Trijicon RMR and a Shield RMS. I was a skeptic when it came to Micro Red Dot Sights (MRDS). Everything was worse for me when it came to shooting with pistol mounted optics. Then I tried the ACRO. Suddenly I was making hits I expected to miss. No longer was I searching endlessly for the reticle. As soon as the ACRO went live for purchase, I made my order.

Several months later I finally received my ACRO, and immediately shipped off my Glock 34 slide to ATEi for milling, as there were no MOS plates at the time. Ten weeks later I had my slide in hand and went to work.

The Aimpoint ACRO Is In A League Of Its Own

The Aimpoint ACRO is unique among the MRDS market. Most optics, such as the RMR, or 507c feature an exposed rear lens and emitter, creating a sort of right triangle shape with the optic body when viewed from the side. The ACRO is completely sealed, taking the shape of a stereotypical mailbox. Initial reactions were mixed, as the ACRO appears substantially larger in photos, especially when on its own.

The reasoning behind this shape is to prevent the ingress of debris which could hinder the function of the optic or obstruct the shooter’s field of view. Additional benefits are easier sight acquisition, as the shooter has a slight tube to help with alignment, rather than a single vertical lens. The latter I find less of a benefit for shooters with proper alignment, though new shooters seem to take better to the ACRO than the RMR or similar options. 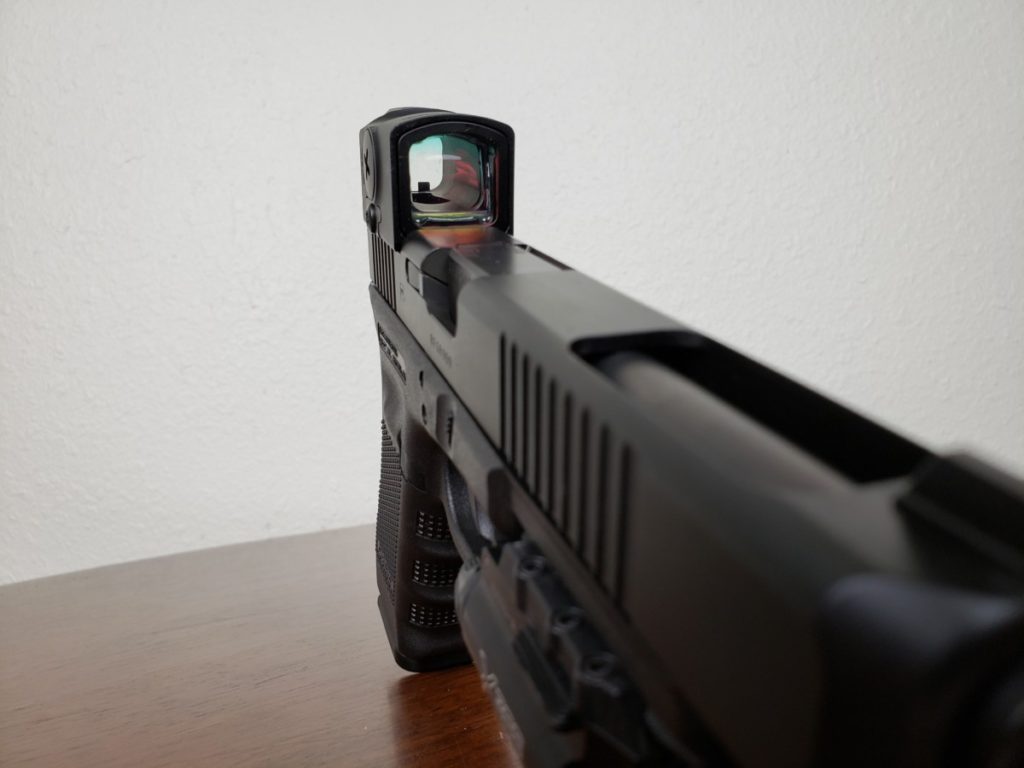 I was concerned that a sweaty tummy pressing against the rear lens could obscure your sight picture, but this is not an issue. After taking Citizen’s Defense Research Handgun Tests and Standards, carrying appendix with no undershirt, there was slight smudging on the rear lens. This is only noticeable when looking for it, giving me no problems throughout the course. Rarely a tummy hair or some lint will get caught between my rear sight and the ACRO lens, but never anything large enough to be distracting or obscuring.

I’ve been shooting my Aimpoint ACRO for roughly four months now. Within that time I’ve experienced zero issues regarding electronics or construction. The internet went wild with stories of the battery life lasting only 3 weeks, which made me regret my purchase at the time. Later, we learned that the shooters getting such short life were running their ACROs on the highest brightness setting at all times. Settings higher than what I use shooting outdoors on sunny days. I keep my brightness at roughly 6, which has lasted for over two months on the same battery. Aimpoint claims provides 1.5 years on this setting. Since the ACRO is on my carry gun, I’ll stick to a regular two month battery swap cycle, as I don’t want to pull out a dead dot when my life depends on it. Aimpoint recommends sticking with Renata batteries for the greatest efficiency.

The ACRO uses a different, less common, battery than every other MRDS on the market, the CR1225. Unlike the CR2032, which is carried nearly everywhere, most stores I visit do not carry the 1225, and I’ve never seen Renata batteries on shelves. On the positive side, the battery compartment on the ACRO is located on the right side of the optic. This means no need to remove the optic when changing batteries. Additionally, my ACRO has retained zero even after two battery swaps.

A 2,000 Round Aimpoint ACRO Review

This setup has slightly under 2,000 rounds of 9x19 through it. Nearly everything has been Blazer Brass 124gr, and Federal HST 124gr. There have been zero malfunctions, even with the increased weight of the slide. The higher weight is noticeable when firing, and increases perceived recoil, but not to a detrimental degree.

Being a closed emitter, the ACRO needs substantially less preventative maintenance than a typical MRDS. No more keeping the emitter and rear lens free of cumulative debris. A simple wipe of the rear lens with a cloth will suffice. I typically wipe down the rear lens with Cat Crap when I notice the rear window becoming a bit smudged for my taste. This is more out of personal pride than a necessity for use. 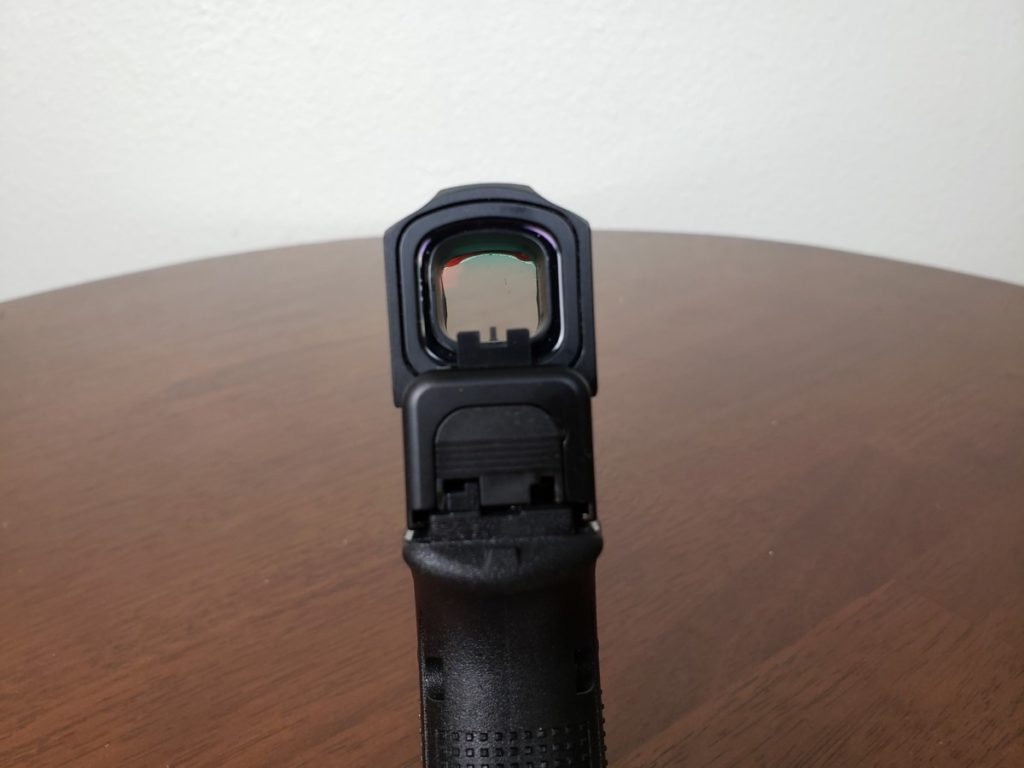 I have not had the opportunity to use the ACRO during adverse weather, though I suspect it performs similarly to other closed emitter optics in such conditions. Additionally, I have had no issues with corrosion from sweat up to this point.

Since the ACRO is a closed design, there is no way to drive screws through the body for mounting like with typical MRDS. Instead, the ACRO uses a cross bolt type system, similar to the Aimpoint Micro and similar optics.

Brightness is adjustable with + and – buttons on the left side of the optic. The buttons are sized well, but are recessed into the optic, making them slightly difficult to press, especially with gloved hands. There isn’t much in the way of tactile feedback, and zero audible feedback when adjusting brightness. 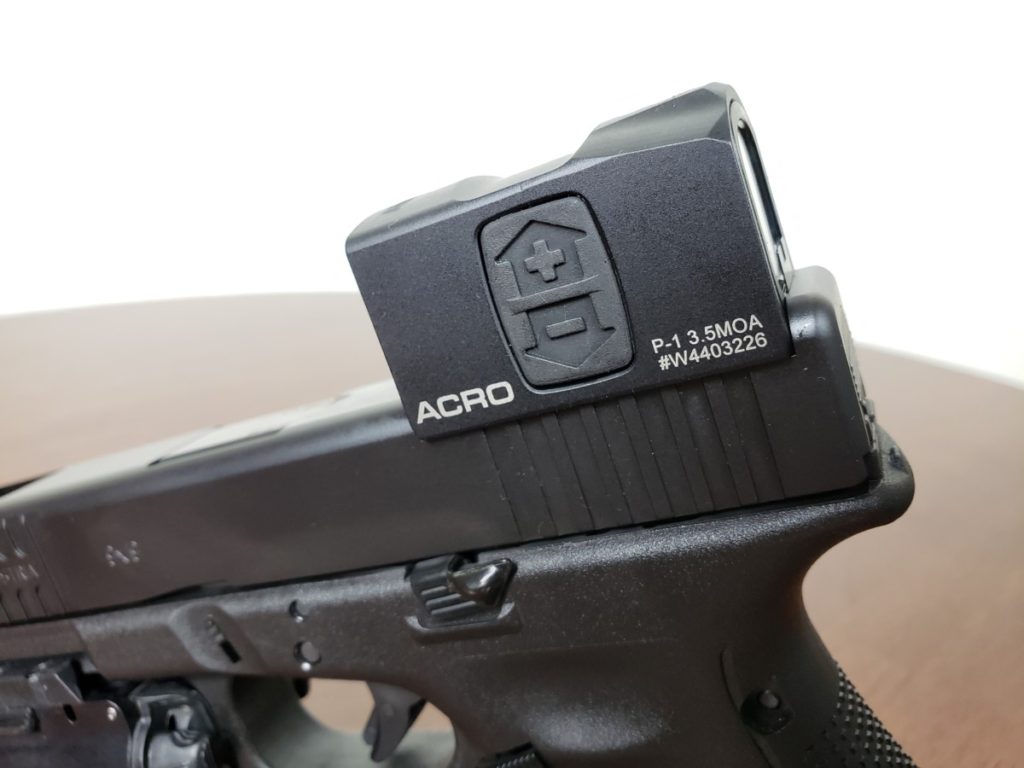 The Aimpoint ACRO features the clearest glass I’ve seen on a MRDS. There is no tint to the glass, unlike the blue tint of Trijicon optics and others. The window is also quite large. Not as much surface area as a Leupold DPP or Trijicon SRO, but certainly greater than other duty grade optics. There are no issues with magnification with the ACRO.

In addition to the clearest glass, the ACRO also has the crispest dot for my eyes. Despite being slightly larger, at 3.5MOA, the reticle appears smaller than my 3.25MOA RMR and substantially smaller than the 2.5MOA Leupold DPP. The red dot is nearly perfectly round, which is a rarity for my eyes. This allows for greater precision at distances, and more confidence in my point of aim.

A Negative Point In The Aimpoint ACRO Review?

The closed emitter is not without drawbacks. The ACRO prints more than a typical optic, as it essentially doubles the height of the slide. A superior belt and holster help reduce printing, but do not remove the enhanced risk with this optic. However, the additional bulk does not cause any additional discomfort when concealing the pistol. 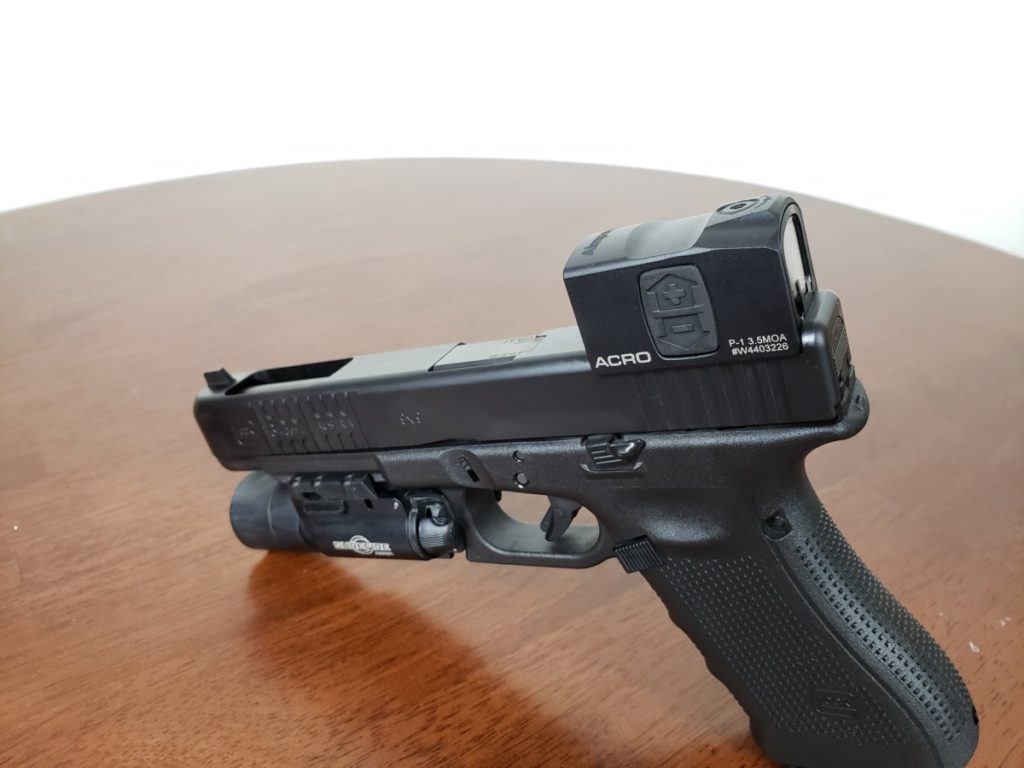 Aside from reduced battery life, my biggest complaint with the ACRO are the elevation and windage adjustments. Virtually every optic in the world uses some sort of flathead for adjustments, whether it’s a screwdriver, case rim, coin, etc. This is not the case with the Aimpoint ACRO. Adjustments must be made with a torx key, which is included with the optic. This is fine for range use, but a massive pain during class or in the field. Clicks are distinct, and require quite a bit of effort to make.

Conclusions For My Aimpoint ACRO Review

The Aimpoint ACRO is rising to become the new standard in MRDS. The closed emitter design solves virtually all of the problems associated with traditional models, while adding minimal weight and bulk. With the biggest downside being battery life, and unit cost, the negatives seem to be dwarfed by the positives. Should you go out and sell your open emitter optics? No, but maybe take a look at your future purchases.

Despite being a newer entry into the market, I feel confident in carrying the ACRO, doing so for several months. I doubt that choosing something with an exposed emitter could mean the difference between life and death, but I’ll take every advantage I can get.

The "Aimpoint" can mean a lot of things to a lot of people. To some, it may bring up memories of a deployment to the [...]

Everyone has to start somewhere, and for Aimpoint, it was with the Electronic. This was Aimpoint's first optic, and the first Light Emitting Diode (LED) [...]