Unless you have been living in a media free bubble the last few days, you have probably noticed that discontent with lockdowns is growing. As stay at home orders get renewed for a second month and unemployment claims top 20 million nationwide, people are becoming increasingly angry. Much of that anger stems from worries about our collapsing economy. There are also growing concerns about executive orders issued by state governors that trample First Amendment rights. These rights include the guarantee of freedom related to religion, expression, and assembly.

One of the first large scale signs of dissent came Wednesday April 15th in Kentucky. As the governor began his daily press update, around 100 protesters gathered on the capitol lawn and in their cars. The protesters chanted sayings such as “We want to work” and “Facts over Fear”. People in their cars honked their horns in unison. The protests could be heard in the capitol building and by viewers of the update at home. The rights of small businesses were at the heart of this protest as well as others. People want to know if big businesses such as Walmart can remain open as long as they implement safe distancing practices, why can't small businesses do the same.

Around the same time on the 15th thousands of vehicles covered in protest signs and flying various flags clogged the streets around Michigan's capitol building. The protest was dubbed Operation Gridlock. Along with those in their cars around 150 people gathered on the capitol building's lawn. Law enforcement reports that people were maintaining social distancing and no related arrests have been made as of this writing. Michigan's governor has been highly criticized for the orders put into place. Governor Whitmer says she respects the right to protest but was disappointment many in attendance were not wearing masks. 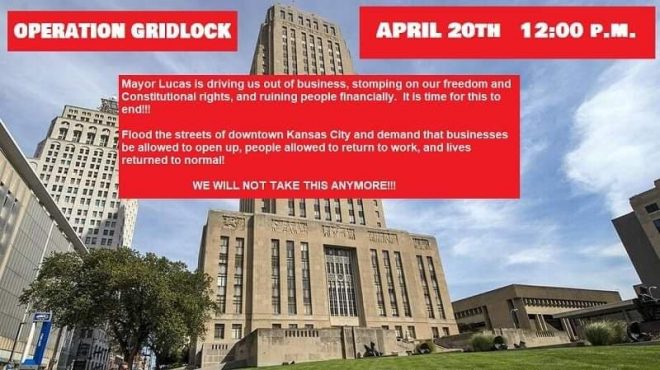 A quick search of Facebook brings up dozens of Operation Gridlock events planned over the next several days. The goal of each event is the same; to protest and bring attention to the extreme economic damage these continued shutdowns are causing, Events scheduled include:

While Michigan's Governor supports the rights of protesters, the same can not be said for the Raleigh, NC police department. On Tuesday a group of around 100 people gathered to protest the state's stay at home order as unconstitutional. The majority of protesters remained in their vehicles and just a few gathered outdoors while practicing safe distancing. The police warned protesters three times that they were in violation of the state's order to stay home and that if they did not disperse they would be arrested.

At least one woman was arrested by Capitol Police during the incident. When asked what law had been broken to warrent her arrest, the Raleigh Police replied that “protesting is a non-essential activity”. As you can imagine, many people have taken issue with that assessment since the right to assemble is guaranteed by the 1st Amendment. When questioned further about their stance, the department doubled down with the statement below. It is all but guaranteed this issue will eventually make its way to the Supreme Court.

In today's related WTF news, New Jersey Governor Phil Murphy apparently believes understanding the Constitution is not his responsibility. During an interview with Fox personality Tucker Carlson, the governor was asked if he had considered the Bill of Rights when crafting his lockdown orders. Mr. Murphy replied “That's above my pay grade” and that he “wasn't thinking of the Bill of Rights when we did this”.

Mr. Carlson pressed on asking the governor “On what scientific basis did you decide that sitting in a church was much more dangerous than buying liquor in a liquor store?” He continued “I don't understand the reasoning. I don't want to think it has anything to do with tax revenues.”. Governor Murphy strongly rejected the implication that tax revenue played any role in determining which businesses are essential or not.

These are worrisome times for anyone who cares about civil liberties and the rights guaranteed by the Constitution. It seems at every turn our rights are being chipped away by well-meaning elected officials unsure how to deal with a global pandemic. Some overreaches are obvious, but others are explained away as being in the “public interest”. At this time it is good to remember the words of Benjamin Franklin, “Those who desire to give up freedom in order to gain security will not have, nor do they deserve, either one.”.

Just because you are practicing your right to assemble and protest doesn't mean you should be foolish about it. Don't let your discontent with the lockdowns put your health in danger. If you chose to participate in any protests make sure to take steps to protect yourself and others. Maintain the recommended six feet of social distancing. If you have a mask wear it. Think about all the times you would have loved to conceal your identity but doing so was frowned upon. Now is your chance to protest as a relative unknown.

We at Primer Peak are not encouraging you do anything illegal. If the police instruct you to disperse, it is on you how you respond. We do encourage you to stay vigilant about your rights and let your elected officials know your thoughts on the lockdowns.