Popular media sells guns, whether it be in film or television form. We all know people who bought a Beretta 92FS after watching Die Hard for the umpteenth time or to look like Detective Riggs from Lethal Weapon. In the era of video games, it shouldn't come as a surprise that pixels drive as many sales as the big screen. With so many video game lovers buying their hero's gun, it is only natural that companies like DS Grips produce the parts you need to bring that virtual gun into the physical world.

As a child of the '90s and early 2000s, I grew up around video games. I have very fond memories of Metal Gear Solid, and Halo: Combat Evolved, however, one franchise really stood out; Resident Evil. The first Resident Evil (RE) was a horror game that took place in a zombie-infested mansion. You play as one of two officers of the elite S.T.A.R.S. unit, Jill Valentine or Chris Redfield. The game was packed full of interesting gameplay, and cheesy dialogue. RE came out in 1996, and over the last 22 years, has had a myriad of sequels and spin-offs.

Generally speaking, the games featured realistic versions of real firearms, with the poster child handgun of the series being the Beretta 92F. By Resident Evil 3, the 92F had evolved into the Samurai Edge, a heavily modified 92FS Brigadier. The fictional S.T.A.R.S. pistol needed to have the beefier Brigadier slide, a stainless, match grade barrel, and use custom grips, among other upgrades. The Brigadier slide and stainless barrel are obtainable for fans of the series, but how about the grips? Well, that's where DS Grips comes in. 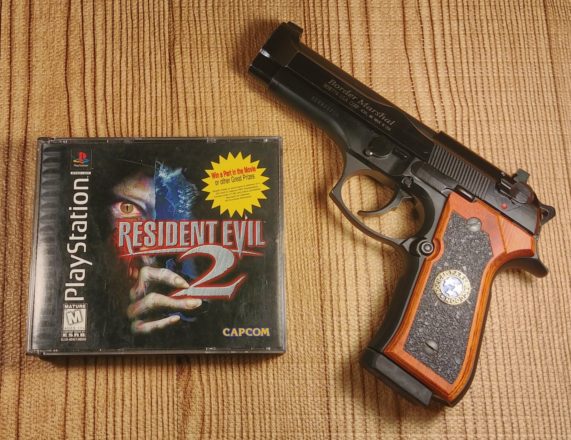 Some More Info On DS Grips

The madman behind DS Grips is Derek S., a massive Beretta 92 fan. He saw a lack of custom options for 92 grips and decided to grab the reins and make his own. One of his most popular options is his Samurai Edge grips. There is a massive overlap of gun people, and video game people, as the demand for Samurai Edge grips is always high. I was recommended DS Grips by a friend and decided to order a pair for my Beretta. Derek offers a few styles of Samurai Edge grips, and I chose the standard length, Jill Valentine grips. A set like mine will set you back $90 American.

After contacting Derek, and placing my order, the wait began. A wise friend once told me that in regards to custom things, you can either get a quality product or have something quick. After about 11 weeks, my grips arrived, packaged extremely well, along with a pocket copy of the US Constitution. For a lack of better words, the grips are brilliant.

My Samurai Edge grips are made from a fine grade cocobolo, with rubber inserts, and a medallion inlet. The blue medallion is specific to the Jill grips, while all models have the rubber inserts. Wood grain, and it's looks can be subjective, however, I find the straight grain of this cocobolo to be fantastic. The edges, and contours of the grips perfectly follow the lines of the gun, with zero imperfections. Fitment to the gun is nice and snug, with no slop. There is a reason why Derek was contracted to make grips for the Resident Evil movies; his work is just top notch. 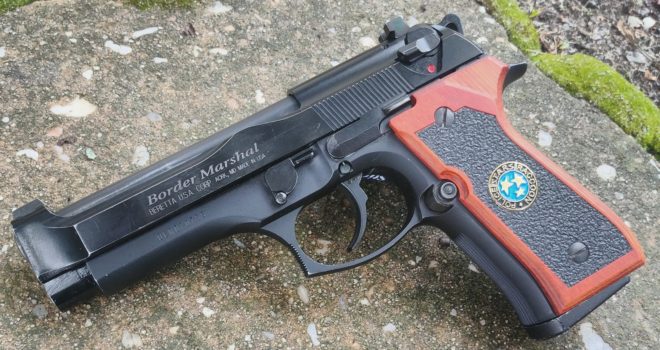 If you are looking for some sweet grips for your 92FS, or you are working on a Samurai Edge build, DS Grips is the place to go. He makes quality grips at a price that is amazing. Be prepared for a wait, but it is well worth it.

If you decide to order a pair, let him know that we sent you there. He deserves more business based on the quality of his work.

Author Note: The grips were purchased from DS Grips full fare, at the cost of the author.