For a new gun owner, identifying the parts of a rifle correctly can make speaking about firearms tough. The willingness to learn what the correct terms are can make talking about your new hobby much easier.

Before you can use, or for that matter, even touch, a rifle, you need to learn about the parts and mechanisms of a rifle. Handling a rifle is serious business, as improper or careless handling can cause dangerous or even fatal consequences.

In this article, we’ll describe the basic parts of a rifle and briefly discuss the function of each part. If you are new to the world of firearms, you must read this before getting involved with one.

Three Basic Components of a Rifle

Just like any other modular machine on the planet, a rifle is also a combination of several parts working together in cohesion.

A rifle is basically comprised of three parts. Each part has its own function and importance when it comes to the overall performance.

The action is to the rifle what an engine is to a car. The action is the heart of the rifle. It is the part where the functions of loading, firing, and ejection are performed.

The action is comprised of the bolt, hammer, and trigger assembly and generally lies midway on the rifle. Its function is to load the cartridge, hit it with the hammer, and eject the burnt shell out.

The stock is the rear part of a rifle, which helps the shooter to attain stability, aim properly, and counter the recoil when a shot is fired. Stocks were originally made from wood (many still are).

However, with advancements in technology, some people prefer to use synthetic or polymer-based stocks. Stocks come in a wide variety of designs, and each of them has their own advantages.

Some stocks have a foldable design, while some feature a minimalist design. Some stocks also allow you to store stuff like batteries, and small medical packs.

The barrel is a kind of hollow metal rod, attached to the action. It helps the bullet to propel out of the rifle properly. Barrels have internally machined spiral grooves which give the bullet a spinning motion when it is fired, thus stabilizing it (this machining is called rifling and is the basic difference between a shotgun and a rifle). 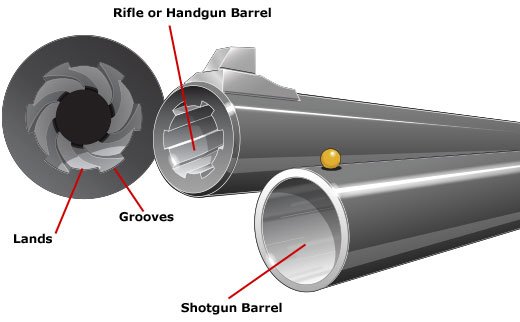 The far end of the barrel where the bullet leaves it is known as the muzzle. The length of the barrel affects the accuracy of the rifle. A longer barrel has better accuracy. Similarly, the material of the barrel also affects performance. Rifles shooting heavy calibers have thicker barrels to compensate for the round’s power.

All handheld firearms can be classified into three basic types. Rifle, shotgun, and handgun. The classification can be made based upon a firearm’s size, length, barrel design, and the type of ammunition being used. Additionally, the purpose of each of these classifications is different. Each of these types is effective in certain situations, but not every situation.

A rifle is a type of firearm primarily designed for precision. A rifle has a long barrel, which is spirally grooved on the inside by a process called rifling. Rifling provides stability to the bullet and offers long range precision. 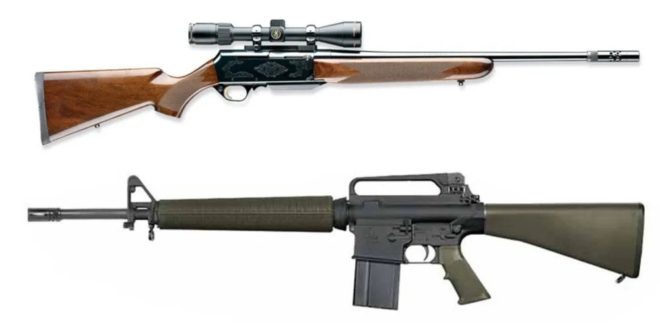 Rifles are generally used for long-range combat, sniping, and long distance shooting applications like hunting. Rifles use different calibers of ammunition and the projectile fired through them is always a single piece bullet.

A shotgun has a design similar to that of a rifle with the major difference being the type of barrel, ammunition, and purpose. A shotgun has a smooth bore barrel which means it doesn’t have any machining done on the inside. 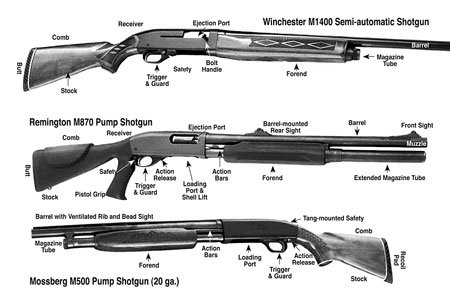 Contrary to a rifle, a shotgun uses a different kind of ammunition. Also known as shotgun shells, the shotgun cartridges contain a number of rounded metal pellets which spray around when shot.

The two basic types are the buckshot and the birdshot. Shotguns are generally good for close quarter shooting, duck hunting, and self-defense as they cause a great deal of damage.

A handgun is much smaller in size compared to a rifle and shotgun. Handguns are considered pistols and revolvers. Handguns work on the same principle as rifles and are very good for close and mid-range shooting. 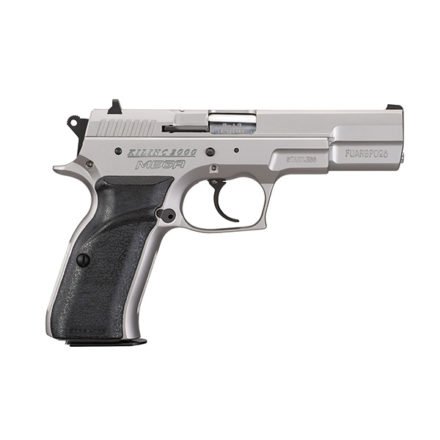 Handguns are easy to conceal and carry and take up much less space. Handguns are generally used for concealed carry, prima facie law enforcement, and mostly as a sidearm. Most handguns are also less expensive compared to rifles.

Parts of a Rifle - A Closer Look

Now we’ll move to a more detailed classification of the different parts of a rifle. For the sake of simplicity, we will take a bolt action rifle as a reference. For those who don’t know, a bolt action rifle is one where you have to charge the bolt to load a new round after every shot. 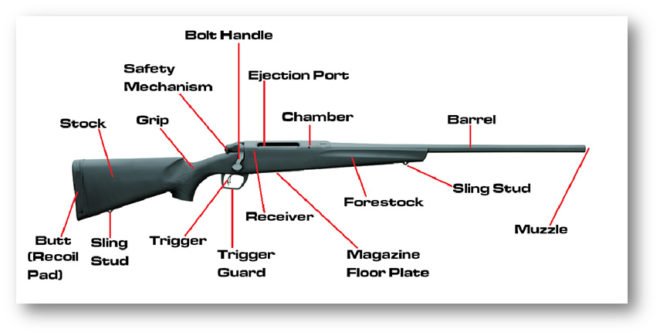 Don’t let your mind drift other places now. A butt of a rifle is different. It is the rear end of the stock which comes in contact with your shoulder when you fire a round.

As mentioned above, the stock is the rear wooden or polymer part of the rifle which lets you hold it against your shoulder when you are firing.

The trigger guard is a D-shaped metal loop which protects the trigger and prevents any accidental discharge. It also works as a reference rest for your finger to allow you to shoot quickly without looking at the trigger.

The trigger is a curved piece of metal which is the operational switch of the trigger assembly. Once you pull the trigger on a loaded and charged weapon, a shot is fired.

There are multiple types of triggers including single stage, dual stage, and drop-in triggers.

Also known as the safety lock, this switch controls the movement of the trigger. If the safety is on, your weapon won’t fire even if the gun is loaded and charged. Semi-auto and auto rifles have more settings on this switch for 3-round and full auto burst modes.

Also known as the charging handle, it helps cycle rounds in the action. To put it simply: it's the thing a sniper pulls after every shot in movies.

A magazine is a sorted array arrangement of multiple rounds. A magazine holds rounds inside and can have different capacities ranging from five rounds to even hundreds.

This is the base of the barrel where the round is held ready for shooting. The bullet separates from the cartridge here.

The wooden/polymer base right below the barrel. It helps the user grip the weapon on the front end.

The rifled metal tube through which the bullet travels when it is fired. Barrel length affects accuracy.

Device to be used for aiming. Front sights and rear sights are aligned to take proper aim.

The fore-end of the barrel where the bullet exits the gun.

Safety Tips When Handling A Rifle

This is the most important part of this guide. You must learn and memorize these tips before you handle a rifle. These tips should be practiced so well that they become a habit and to the extent that you perform them unconsciously while holding a rifle. Handling a firearm carelessly can cause serious damage to the user or others. While there are a number of safety rules, you must remember these three always:

A rifle can be divided into three basic components which include the action, the stock, and the barrel. The action is the part where the primary operation of a rifle is performed. The stock helps in aiming and gripping the rifle and the barrel affects its accuracy.

The rifle can be further classified into more parts, and each of them has their own specific function. But before you even start handling a rifle, you must understand and obey important safety tips, to the extent that they become a habit.

For more information regarding rifles and firearms, check out our friends over at Gunmann!