The Trench Gun, an American icon spanning multiple makes, models, and even wars. Few firearms from the era have such an aura about them, and even fewer scream "USA USA USA" as much as these. As originals become more scarce, shooters are having to find new ways to whet their appetites. One such way is with the Inland M37 Trench Shotgun.

The Inland Manufacturing M37 Trench Shotgun is a 12 gauge pump action shotgun based upon the original Ithaca M37 shotgun used throughout WWII. These new reproductions are a collaborative effort between several US companies to try and accurately recreate what GIs would've carried during the war.

Is The Inland M37 Trench Shotgun Built For War?

One of the first things I noticed about the Inland Manufacturing M37 Trench Gun was the quality of the furniture. The wood stock and foregrip feel unfinished like a final sanding was missed. Much like with Inland's M1 Carbine, the furniture is easily gouged by bumps and falling brass. Based on this alone, I honestly thought I'd been handed the wrong gun. 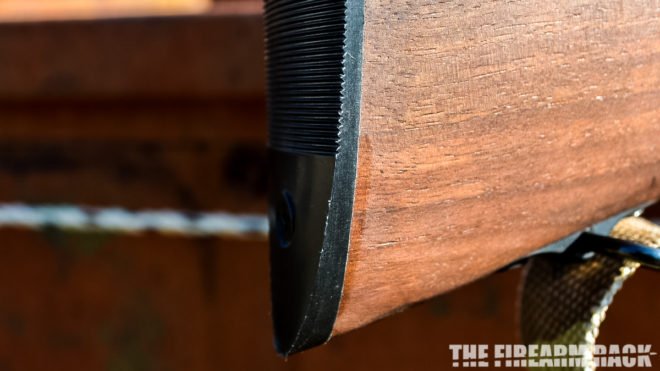 Two screws that attach the buttplate are not flush with their holes, leaving unpleasant edges that dig into the shoulder under recoil. Upon closer inspection, I found that these are simply long wood screws, not set into any channel, but rather drilled wildly into the stock. The screws used across the M37 are made from very soft metal. Every screw was easily marred when trying to tighten or loosen them. I opted to cease disassembling the gun for fear of further damaging the hardware.

The foregrip is smaller than I'd like, but it provides enough room for my medium size hands. The wood does not provide much traction, and the whole setup feels a bit flimsy, but I ran into no durability issues. 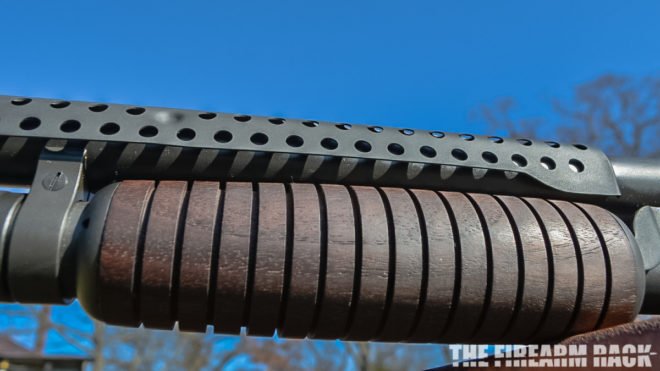 The heat shield on the Inland Manufacturing M37 Trench Gun works excellently. After 50 rounds fired in rapid succession the barrel was far too hot to touch. The heat shield was warm, but not painfully so, and covers far enough down to prevent accidentally touching the hot barrel. This made me realize why people put heat shields on shotguns, as I've burned myself on hot barrels in the past.

How are the Controls?

Remington fans will appreciate the safety on the M37 Trench Gun. Located behind the trigger guard on the right side, the safety is well placed and of a decent size. Despite being similar to Remington pattern guns in this respect, I find the Ithaca to have a much better safety. The click is much more positive and requires slightly less force than on competitive options. 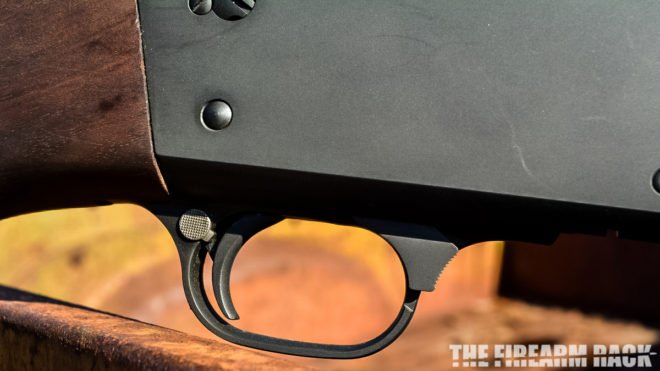 The Inland Manufacturing M37 Trench Gun's action release is located in front of the trigger guard on the right side of the gun. The placement is fantastic, being in exactly the correct place to be actuated by my trigger finger. I never needed to break my firing grip to open the action. The action release requires just enough force to actuate to prevent accidental unlocking, but not so much as to strain the finger.

During the review process I fired 505 rounds of various types, to include:

Hornady Critical Defense with the Versatite wad provided a 2" grouping at 7 yards. Federal Flite Control puts all pellets and wad through the same hole at 7 yards.

I used the M37 Trench Gun during portions of Mid West Tactical's Basic Shotgun Marksmanship course. During the class, I hit targets out to 75 yards using Winchester 1oz slugs, as well as many more within normal distances.

The Inland Manufacturing M37 Trench Gun produced two failures to extract. One on the last round in the tube, which only needed an additional rack to clear. The second failure to extract happened in the middle of a string of fire. This resulted in me ejecting two additional rounds to empty the tube before racking three times to eject the stuck hull. This second time required substantial effort to remove rounds from the gun before clearing the stuck case; having to flip each shell within the action in order to fit the brass between the lifter arms. Both of these occurred while using Winchester Super Target #8. 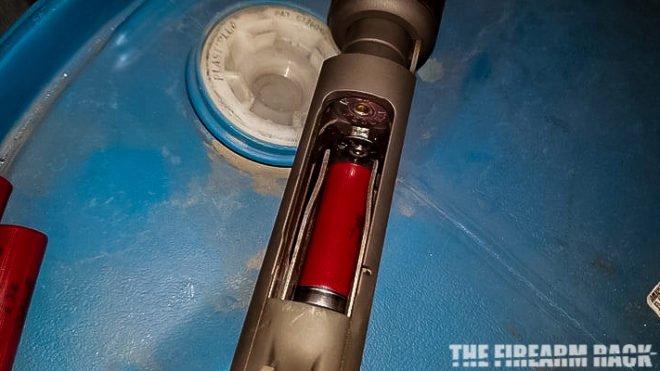 Another shooter induced a similar malfunction that was equally difficult to remedy. This time around it was Winchester SXZ 00 that produced the malfunction.

Unlike the original M37, the Inland Manufacturing replica has no slam fire capability. If you ride the reset, you will cause a dead trigger, forcing you to cycle the action again, ejecting a fresh round from the gun. I understand removing slam fire is for liability reasons, but at the very least let shooters ride the reset. I can't tell you how many times I killed the trigger inadvertently.

Ejection is consistent and powerful. Shells launch out of the bottom of the receiver with authority, flying several yards down range after bouncing off the ground. You could probably take out a bad guy or two by lodging spent hulls into their temples.

One thing that really stands out about the M37 Trench Gun is how smooth everything is. Shells load extremely smoothly; this is definitely the easiest shotgun to load that I have used. The action is like glass, possibly the best I've felt in a pump action shotgun. This is what I would expect from a gun with a $1,300 MSRP.

Some modern techniques cannot be used due to bottom load/eject system. Gone is the ability to perform a slug changeover. Keep this in mind if using this gun for sporting or defensive purposes.

Should You Buy The Inland M37 Trench Shotgun?

MSRP for the Inland Manufacturing M37 Trench Gun is $1279.00. With a little searching, original Ithaca 37's can be had for far less, as can other competitive trench guns such as the Winchester 1897, and Remington Model 10. I feel similarly about this gun as I do with the Inland Manufacturing M1 Carbine; it is simply too expensive for what it is. Inland needs to either substantially lower the price or increase the quality of the furniture to bring the value up.

That being said, the M37 is far more reliable, and overall seems to be a superior product than the M1 Carbine. While not my first choice, I actually would feel comfortable defending my life with the M37 Trench Gun. Will I buy one for myself? No, but I sure enjoyed my time shooting the M37.

You can find more information about the Inland M37 Trench Shotgun on the Inland Manufacturing website.

Author's Note: Inland Manufacturing loaned the M37 Trench Gun to Firearm Rack for the purposes of this review.