If you're anything like me, then video games were your first introduction to firearms. Hours and hours of my life were spent playing Goldeneye on the Nintendo 64, both as a youth and an adult. One of the most iconic (if shittiest) guns in the game was the Klobb, a machine pistol you could dual wield. Badass, right? Despite the made up names, most guns in Goldeneye were based on real life counterparts, with the Klobb being representative of the Vz. 61 Skorpion.

The Vz. 61 Skorpion is a machine pistol designed in Czechoslovakia for use by military and law enforcement. Chambered in .32ACP, the Skorpion is a compact, light recoiling gun that gives more stability than a handgun with only a little more bulk. I spent the day on the range with a coworker who owns an SBR'd variant, though his is unfortunately semiauto only.

My first reaction is elation. This is a cool gun and I want it. The Skorpion is far from the most modern firearm, and suffers from some ergonomic hiccups common to guns of the era. The grip is comfortable and fills the hand well without being overly large. 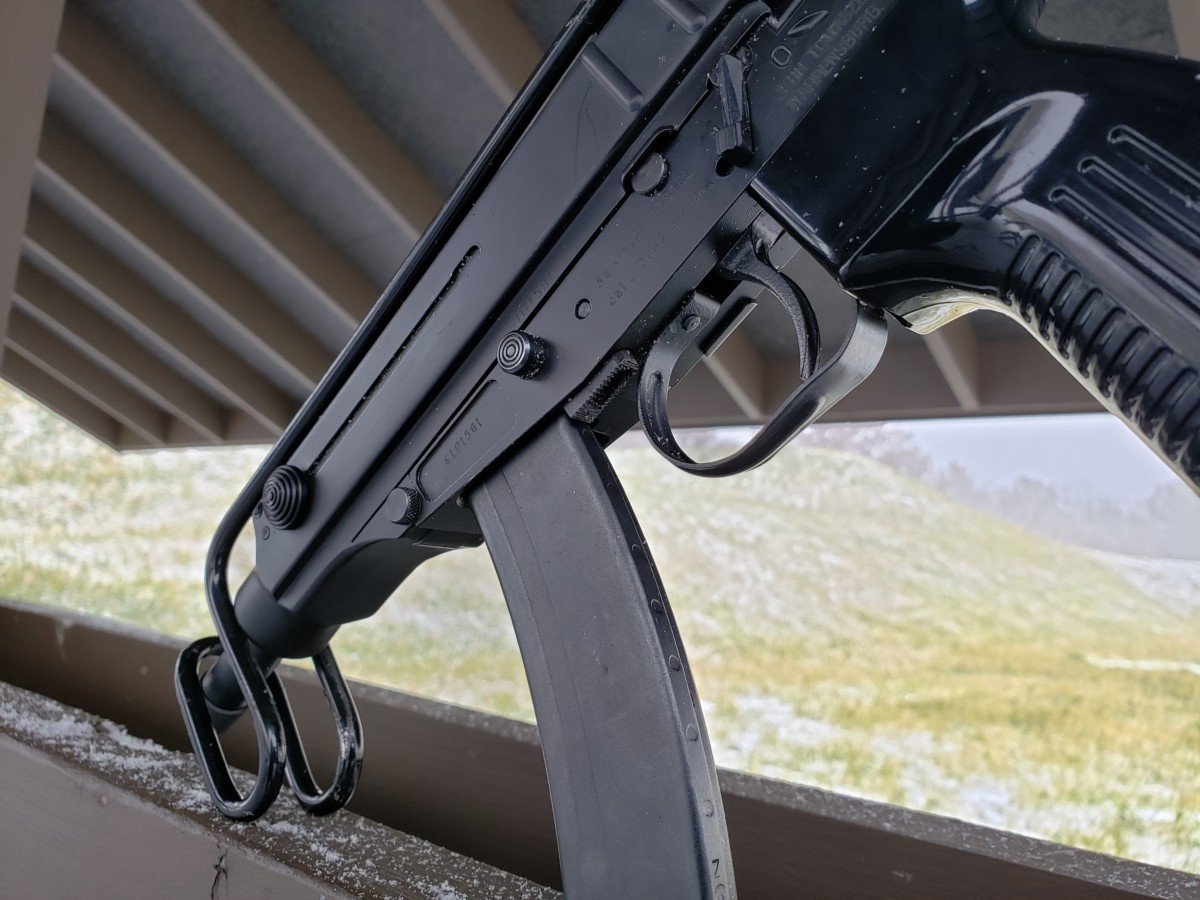 Controls are very simple on the Skorpion. The safety is difficult to reach, when putting back on safe, but gives no problems when moving to fire. Magazine release is a push button on the left side of the gun just above and behind the magazine. On the underside of the gun, between the magazine and trigger guard is the bolt lock, which pushes upward when the bolt is pulled rearward. All of the controls require enough pressure to activate to ensure only deliberate presses will work, but not so much as to impede use.

The trigger is fairly good. Certainly better than other submachine guns I've used, such as the Uzi or MP5, and beating other offerings such as the Ruger 10/22 and M1 Carbine. I had no trouble running the Skorpion trigger rapidly at close ranges or squeezing off slower, deliberate shots at further ranges.

Sights are small, but fair for the time period they were designed. Regulated for 75 yards, there is a little bit of hold over and under to be cognizant of. Despite this, I successfully passed The Test with scores in the low 90s and kept all my rounds on a mini IPSC target at 25 yards with no issue.

The top folding stock is one of the most famous aspects of the Skorpion. Held in place by the front sight wings when folded, a quick boop from below give the stock enough momentum to flip into its open position. The angle is quite steep, making any sort of cheek weld nearly impossible. I am able to get a slight chin weld, though generally I did not use this technique either. Simply I kept the stock firmly into my shoulder and brought the gun into my line of sight like with a normal pistol. 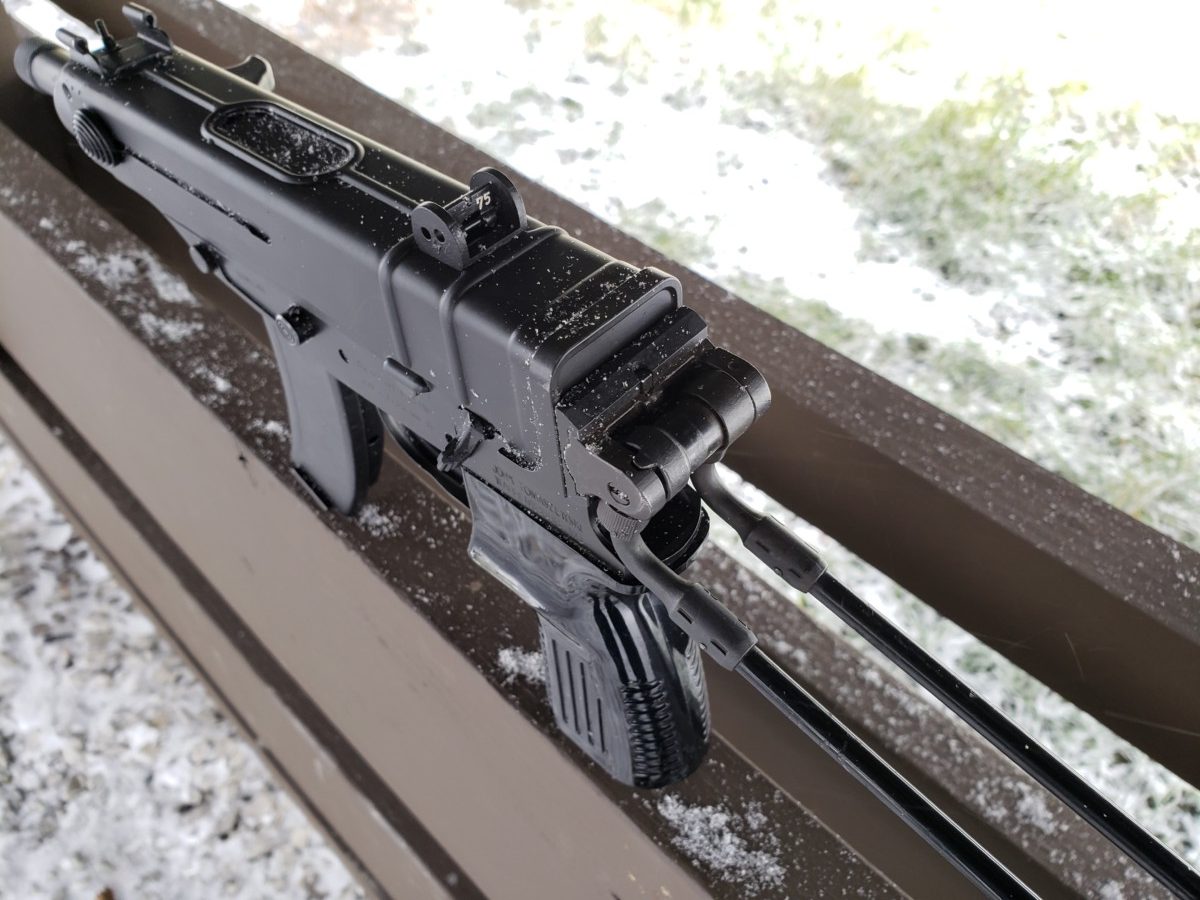 Calling the Skorpion stock wobbly is an understatement. It moves both laterally and vertically, with more movement in the latter. A firm grip and shoulder weld keeps this to a minimum. The internet overemphasizes this issue, in my opinion, and I believe that the stock does improve stability with this gun.

Range time was frigid. Snow fell fast and thick, with the temperature dropping to roughly 20 degrees Fahrenheit. We used a mix of 20 and 10 round magazines, and experienced no malfunctions. Recoil is next to nothing, only slightly more than a .22LR due to the low power of .32ACP and the higher weight of the gun.

My only issue with the gun is the reciprocating charging knobs. The Skorpion features ambidextrous, half circle knobs to operate the bolt. My friend has replaced the right side knob with a hook-like handle for easier manipulation. Repeatedly while shooting I would put my support thumb into a high position, causing it to get hit by the left side knob.

This did not hurt, and caused no issues with cycling. Simply something to be aware of, and a training issue to overcome. The aftermarket charging handle is much easier to use than the factory knobs, especially during timed reloads.

Loading a full magazine on a closed bolt is nearly impossible. Be sure to either download your mags, or lock the bolt open during reloads.

Final Thoughts on the Vz. 61 Skorpion

People say not to meet your heroes, or you'll walk away disappointed. This generally rings true with firearms too. Luckily the Skorpion defies expectations and was a dream to shoot. Ergonomics are solid, recoil is minimal, and the thing is just cool. I'm very thankful to have friends with cool guns, and I'm looking forward to taking this one out again.

If you're looking for a cool plinker, and want to SBR something, take a look at the Vz. 61 Skorpion.