BLUF: The Springfield Armory EMP 4 stands tall among its full-size brethren. Proprietary parts are a hassle, but are quality made.  If you are thinking of picking up a 9mm 1911, then this may be the gun for you.

What sets the EMP 4 apart from other 9mm 1911’s is that it has been designed from the ground up for this round instead of being converted from a standard .45 ACP model. Depending on how you look at it, this is either a pro or a con. On the positive side, the gun is noticeably more compact than the competition.  Overall, size is comparable to a Glock 19, but thinner due to the single stack magazines. On the negative side, you'll be causing John M. Browning to roll in his grave every time you pull this thing out. 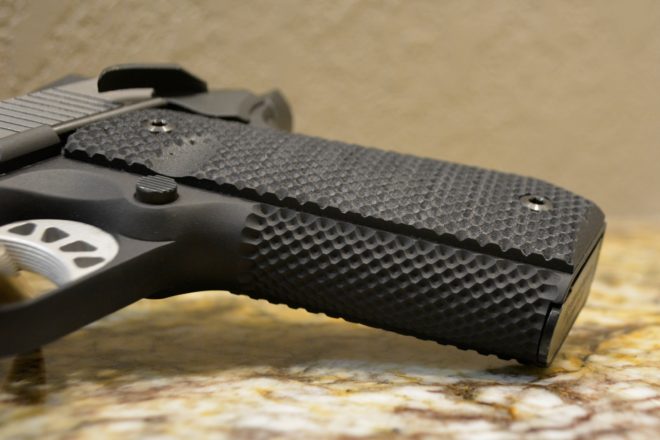 The EMP’s reduced size is complemented by an aluminum frame that reduces the weight to 30.9 ounces from the 40-44 ounces of a typical 1911. Despite the reduced weight and high bore-axis inherent in all 1911’s, the EMP is exceptionally controllable. This is due, in part, to the deep serrations on the front and backstrap of the frame and the aggressively textured G10 grips that provide a rock-solid purchase. Personally, I love the texturing, but some say that Springfield has gone too far.

The trigger is exactly what you’d expect from a 1911, and when paired with the low recoil of the 9mm, you’ll have zero issues making rapid, accurate shots. The ambidextrous safety snicks on and off with precision, requiring just enough force to keep from inadvertently moving the lever, but not so much as to hamper operation. The magazine release is non-reversible and empty mags eject with authority.

The EMP comes with a fiber optic front sight, two dot rear, a match grade bull barrel, a beveled mainspring housing, and a full-length guide rod. I think the guide rod is an unnecessary complication, as a tool is required for field stripping but a paperclip or similar will suffice in a pinch. 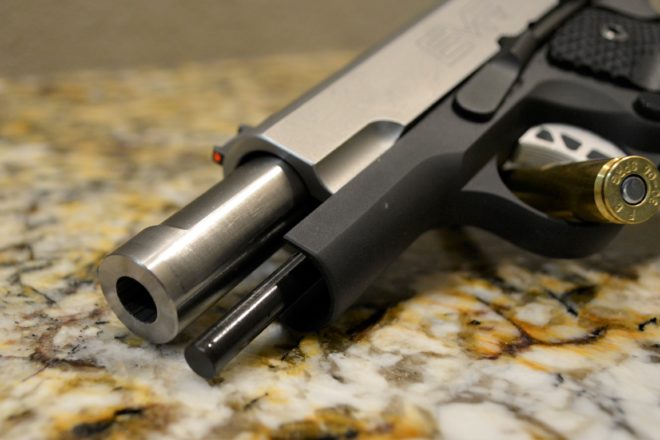 In the case are three 9 round magazines, a cleaning rod, the tool you’ll need to disassemble the gun, and a small container of Springfield's own lubricant.

Magazines are completely proprietary to the EMP 4. While you won’t be able to use your favorite Wilson Combat mags with this piece, the factory magazines have proven reliable in all my shooting. Prices are reasonable at $25.50 for those wanting to keep a few spares.

We fired 297 rounds of six different types of ammunition.

American Steel produced one failure to fire, and one stuck case; problems I see with every gun--aside from my Glock--that has had this ammo run through it. Other than these two hiccups, the EMP 4 ran like a dream. Using a mix of slow and rapid fire, we dusted targets from five to fifteen yards with ease. John Moses Browning himself may even forgive this heresy if he were to put a few rounds down range with it.

Overall, the Springfield Armory EMP 4 exceeds my expectations. It's a highly concealable, highly shootable, and a high-quality piece of equipment. While the 1911 is never my first recommendation for a defensive firearm, the EMP 4 is far from a poor choice of life-saving equipment. 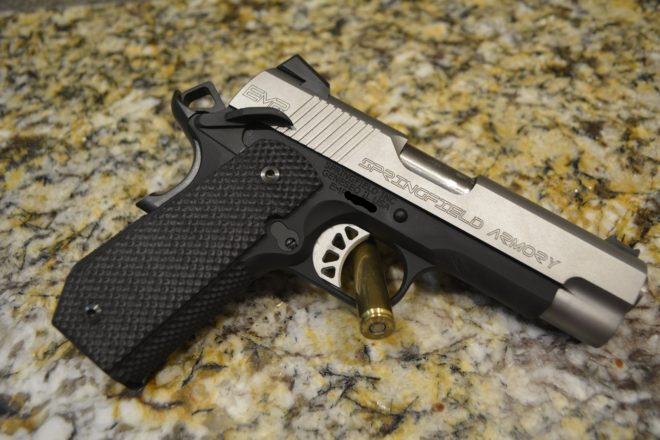