When deciding to change my carry pistol from a Glock 26 to a Glock 19, I knew I was going to need a new holster. I also knew--or thought--that the new holster needed to have a spare magazine attached, much like with the G-Code INCOG I had been carrying for the previous two years. This led me to the Sidecar from T. Rex Arms.

The Sidecar is an Appendix-Inside-the-Waistband (AIWB) holster with the ability to carry a spare magazine alongside the pistol. It has adjustable retention on both the gun and the spare magazine and allows the user to adjust either of the two belt clips for ride height. There is also a kydex Raptor Claw attached to the pistol side of the holster, which helps to drive the grip of the gun into the wearer's body, increasing concealment. 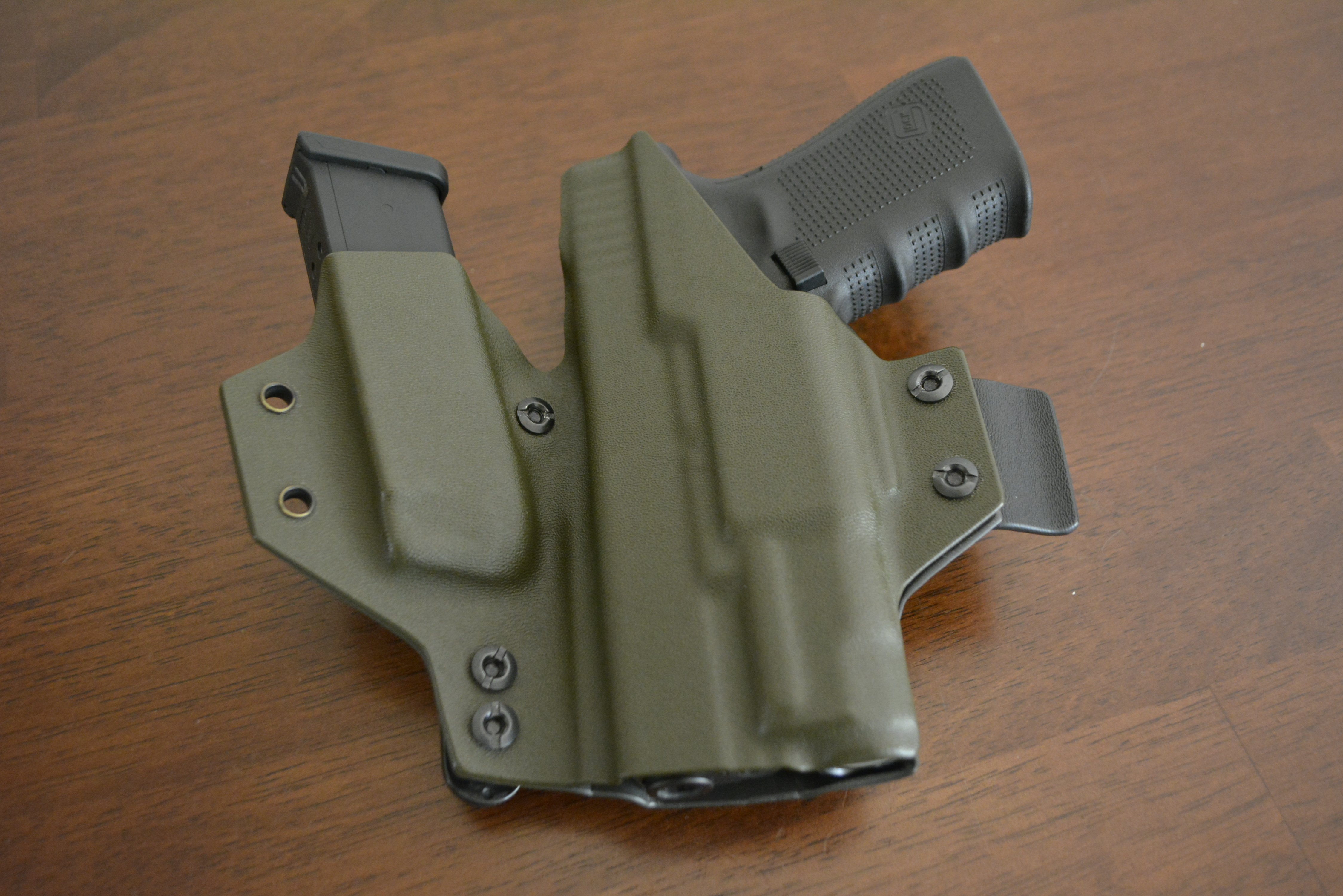 The spare magazine is held at an outward angle to facilitate rapid reloads and permanently affixed to the holster. Take a few minutes to watch some of Lucas' (the owner of T. Rex Arms) Youtube videos and you will see that speed is a high priority with his designs. Users can choose the direction of their magazine based upon their preferred reload method.

Shooters can also customize the color of their Sidecar, adjust the height of the sweat guard, and make modifications for optics and threaded barrels. Light bearing models are available--mine is set up for use with an Inforce APLc. On my specific holster, the light was not necessary for retention, although the gun was much less tight without one mounted.

Initially, I was very excited to start carrying a full-size handgun, especially one with a light. Unfortunately, the shortfalls of the design soon made themselves apparent.

If your first impression of the Sidecar and similar holsters is that they are unnecessarily large and inflexible pieces of gear, you'd be right. The entire front of my pants is taken up by the holster, leaving no room for other equipment I might want along the front of my body. This makes simple tasks, like tying shoes, an uncomfortable chore. After changing to separate items to carry my pistol and other gear, I am able to comfortably conceal more equipment and a larger gun/light combo.

Upon researching the Sidecar style of holster further, I found several instances of the type breaking along different stress points, particularly near the Raptor Claw and the apex between the gun the magazine. This comes from the belt pressing against the two ends of the holster over time, resulting in hairline fractures that can ultimately split the kydex. There are also multiple reports of belt clips breaking from repeated donning/doffing.

When repeatedly squatting or bending over my Sidecar will flop itself out of the top of my pants, while staying attached to my belt. This generally occurs after the Raptor Claw becomes stuck on the top of my belt, instead of pressing against the inside of the pants--defeating its purpose. I believe the reason for this is the claw being located so close to the top of the belt.

The "V" shape of the claw may give it additional leverage to work its way up the belt. I have not had this issue with the claw on my PHLster Spotlight.

The Nail in the Coffin

What ultimately convinced me to abandon the Sidecar was its failure to retain my firearm.

On three separate occasions the Sidecar dumped my pistol onto the ground; during one instance I was looking straight down the barrel as the gun hit the floor. Thankfully I don't carry a SIG or Honor Defense!

During all three events, I was performing normal activities: picking up an item from the floor, leaning over, etc. Not something I would expect to jostle a gun loose. By good fortune alone, I was in my for each incident, saving me from the public eye.

The first time I thought I had made a mistake, so I tightened the retention as much as possible. A few minutes later and the gun falls again. Tighten screws, apply some blue Loctite. Several weeks later, the pistol falls a third time. Holster goes on the shelf and out of my carry rotation.

I can only imagine how the Sidecar would perform in an entanglement, or something as simple as slipping on ice. It certainly is fast to draw from, but better retention isn't going to get anyone killt in da streets.

I did reach out to T. Rex Arms who asked me to send photos of the holster to check for any obvious defects. They determined that the holster was in working order and to apply Loctite to the retention screws. Personally, I disagree with this response, as no other passive retention holster I carry has needed Loctite to keep the gun in place.

With all of its shortcomings, I'm curious why so many "pros" vouch for holsters like these that are clearly inferior to other offerings.

Do I recommend the T. Rex Arms Sidecar?For any serious use, including conceal carry, I absolutely do not. This is one holster that I have zero desire to ever wear again.

Like Loading...
About Daniel Reedy 209 Articles
Daniel is a Rangemaster Advanced Instructor, and USPSA competitor. He has received training from Craig Douglas, Tom Givens, and Steve Fisher among others. In his free time Daniel enjoys petting puppies and reading the Constitution. Daniel has also been published by the Kommando Blog Daniel also writes for the Kommando Blog

Copyright © 2021 Firearm Rack All Rights Are Reserved. See the copyright notice page for attribution requirements.
Affiliate Disclaimer: Firearm Rack is funded through direct donations and affiliate programs where the retailer pays a small portion of the sale to the site for the referral.