I purchased a Coolfire training system in November 2021 and have used it several times per week since then.  Now that I have enough time with it to form an opinion, I'll go over some of the what and why behind the system.  The Coolfire system does cost most than what a new Glock costs, so maybe these impressions will help you decide if it's for you.

Introduction to the Coolfire Trainer

According to The Internet, dry fire is what you do to build and maintain skill.  Live fire confirms what you've built and maintained.  There is absolutely merit to that line of thinking.  Many of the better shooting classes I've taken spent hours on dry fire before a single live round was fired.  Unfortunately, there are things you cannot do in dry fire.  For most repeating firearms, the action must be cycled before you get another trigger press.  Recoil is not present and sights do not move once the shot is fired (or they shouldn't, anyway).  While a skilled shooter can tell a good shot from their sight behavior, there is no effect on target seen to truly confirm this.

Throughout the ongoing ammo crunch, all sorts of internet experts waxed poetic about the joys of dry fire in a time of ammunition unavailability.  And yeah, if that's all you've got, dry fire is what you need to do.  But frankly, speaking as somebody who has dry fired for a decade, dry fire is boring.  There's only so long that the process of draw/see sights/click/cycle slide can hold my interest.  So towards the end of 2021, I began looking for an alternative.

What is my Ideal Dry Fire System?

Ideally, I'd like it to be live fire -- but I can't really do that in my basement, nor can I afford to shoot as much as I'd like.  The things I want in a dry fire system are:

Various products on the market address some of these desires.  The Dry Fire Mag, for example, checks one box (the resetting trigger), but its pull characteristics differ from the real trigger.  Next Level Training makes excellent products, but after getting a metal SIRT copy of my P320 milled for a red dot, I would have spent the cost of a new pistol -- and I wouldn't get recoil, sight movement, or the same trigger.  For me, the only option which seemed to meet all my wants was a Coolfire system.

Prior to purchase, I had some limited experience with the product.  I was fortunate enough to be able to use a law enforcement simulator where the agency had a Coolfire-equipped Glock with a laser and a video scenario machine controlled by an instructor.  I walked away feeling this experience was about as realistic as it could get.  After this, I was sold on the concept for dry fire.

Coolfire is a replacement barrel which contains CO2 and a piston.  When the trigger is pressed, the CO2-driven pistol then works the slide.  From the shooter's perspective, they receive a resetting trigger, recoil, and sight movement.  The company makes training barrels for a wide variety of firearms.  Barrels are available for 1911s and 2011s, Caniks and CZs, Smith and Wessons and Sig Sauers -- and many others.  Additionally, they make laser inserts -- both visible and IR -- to show you the effect on target and allow compatibility with various laser dry fire programs and targets.  Coolfire also sells replacement parts and fill adapters for various CO2 delivery systems. 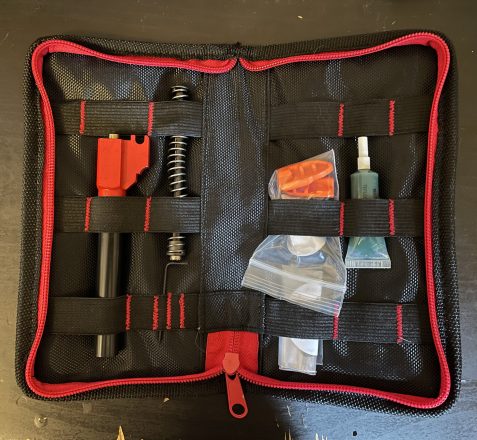 The kit comes with the barrel, a recoil spring, spare striker tips, tap rack training devices, wrenches for adjustment, and grease for the CO2 adapter

With Coolfire, you can do everything you can do in dry fire -- plus quite a bit more.  Instead of drawing and firing once to a B8, I can draw and fire three times.  I can do failure drills.  Transitions between targets are easy, and I can do them with multiple shots per target.  I can even get recordings on my shot timer if I increase the sensitivity.

Because the system simply replaces the user's barrel and recoil spring, holster compatibility is unchanged.  The only caveat to this is the Safariland ALS system: I find that it doesn't always lock in fully, likely due to dimensional differences in the barrel hood.  Your trigger is unchanged from your real gun because it is your real gun.

A feature I like about the Coolfire system is that the barrel hood is red.  This makes it readily apparent that you have an inert firearm -- an important safety feature, considering that you're using a real gun with a different barrel in it.  Obviously, the system is unable to chamber a live round because there is no chamber.  Nevertheless, this small detail matters for safety purposes. 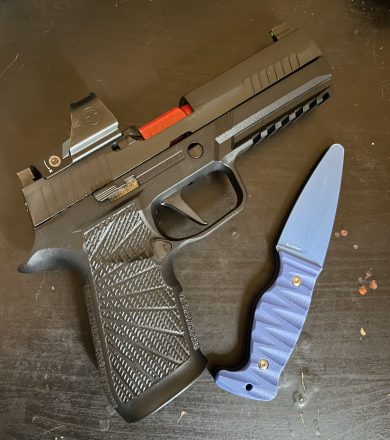 In my estimation, the recoil of the Coolfire system is about 80% of 115gr 9mm.  It's definitely more than a .22lr.  My observation is that the dot does not necessarily behave like it would in live fire, either: due to the weak recoil spring, my observation is that the dot tends to dip down when the gun returns to battery.  Nevertheless, the recoil is enough to keep my grip honest and the lifting of the red dot under recoil is more than sufficient to allow me to practice shot-to-shot recovery and target transitions.

This shows the recoil impulse of the system.

What's the Capacity of the Coolfire Trainer?

I did not purchase a capacity extender because I wanted to ensure holster compatibility.  Limited to the CO2 in the barrel, I find that I get about ten good shots (that is, full recoil) and an additional 5-8 usable shots (less than full recoil) before the system stops cycling fully for every shot.  So, in other words, I get about a magazine's worth before I need to refill the barrel.  This is easy: I push the barrel into the adapter for a few seconds and get back to shooting.

Specific to the CO2 adapter, I strongly recommend the user buy the Sodamaker adapter.  This allows you to go to the grocery store and buy common 14.5oz CO2 bottles used for homemade carbonated beverages.  SodaStream is a common brand.  The bottles are also sold online and, due to the container, they don't have the shipping restrictions that other systems have.  Having said that, adapters are available for several other delivery systems, including common refillable paintball canisters.

What are the Costs?

I paid $300 for the basic Coolfire system, which came with a barrel, recoil spring, striker tips, maintenance parts, and a Sodastream CO2 adapter.  I've owned the Coolfire system for about a month as of this writing.  With 3-5 sessions a week of about 100 shots per session, I am still on the original SodaStream bottle I bought at Wal Mart ($30).  The kit came with three striker tips, which are consumable; I am on my second striker tip, and recently ordered a 25-pack ($42).  My total investment so far is $370 -- so, about the cost of a case of 9mm with shipping and sales tax.  Going forward, with a striker tip replacement every 500 "rounds" or so and a $30 SodaStream bottle every other month, the cost of using the system should be fairly minimal.

Conclusions on the Coolfire Trainer

As I write this at the end of 2021, bulk 9mm ammunition seems to be hovering around .30cpr online for imported ammunition.  Familiar brands like PMC, Magtech, Winchester, CCI, and Federal are closer to .33-.35cpr.  For those of us who reload, it's an incredibly tough market -- primers at a "reasonable" price (that is, roughly 3-4 times what they cost at the beginning of 2020) sell out almost instantly, and the common pistol powders quickly follow suit.  There's no other way to put it: it's a more expensive time to be a shooter.  If Coolfire is within your budget, the system allows you to build and maintain your pistol skills using less ammunition.  And, honestly, it made dry fire fun again for me.  If that sounds like something that interests you, give it a shot. You can check out what Coolfire has to offer >>HERE<<

Spend a little bit of time in the firearms world and you'll begin to see old ideas regurgitated as something new and groundbreaking. Whether that's [...]

The Importance of Testing Your Ammo [2022]

I've been doing a lot of .22 LR ammo testing lately. I'm working on a series on pocket back up guns (BUG)s, which means trying [...]

The Dangerous Lack of Accountability of Influencers and Meme Pages

The internet has connected us in ways never before thought possible. We have more data at our fingertips than you could consume in a lifetime. [...]