Last year, I reviewed Mantis's Blackbeard dryfire trainer. I really enjoyed it, and found it to be an extremely useful tool for dryfire on the AR platform. Mantis reached out to us again, and provided their new Blackbeard X for us to test. It has more features, namely connectivity to the Mantis X Dryfire App. Is it a better buy than the original Blackbeard?

What is the Mantis Blackbeard X?

While not required reading, my review of the original Blackbeard from 2021 would be helpful to read before this review. The Blackbeard X is about 66% the same product as the original one, however, this has had a major update. What are the features of the Blackbeard X?

Aside from the new Bluetooth features, the Blackbeard X is the same product as the original. The BCG component is identical to the original Blackbeard, however, the magazine is the new part.

Mantis is offering complete Blackbeard X models for sale, but they are also offering just the BBX magazine for sale. If you already have a Blackbeard and want to upgrade, there will be a trade in program for your old magazine. Stay tuned in to Mantis for updates about that, as of time of writing we've got no specific info on it.

I was sent the green laser version, and began my testing.

The new magazine allows for your Blackbeard to be able to interface with the Mantis X apps. This is an excellent feature, in my opinion. The Blackbeard already made it easier to do dryfire drills, but now you've got a way to track your progress. I'm a big statistics guy, so I love this new addition.

Pairing the Blackbeard X with the Mantis apps is quite easy. Just open the app on your device, and press the pairing button on the magazine. When the magazine and device are pairing, the small LED will flash blue, then stay lit once paired. I use a lot of Bluetooth devices, and I wish that they all paired as quickly and easily as the Blackbeard X.

Another new feature of the BBX is the charging indicators atop of the magazine. There are 5 little LEDs that will light up as the magazine is charging. This is quite helpful, as the charging time for the BBX can be a little long. From totally dead to fully charged took about 3 hours, but that charge lasted me a good 10 days of use. If you don't want to use the Mantis apps with the BBX, you can still use it like a standard Blackbeard, and the Bluetooth won't lead to any parasitic battery drain.

The previous Blackbeard worked in every AR that I tried, how about the BBX?

The original Blackbeard came in an excellent travel case, and so does the BBX.

The case has spots for both the BCG and magazine, and a mesh pocket for small parts. I tend to toss my BCG, charging handle, and other spare parts into the case once I install my Blackbeard.

Fitment for the Blackbeard X was as good as before. However, I did have a trigger that it did not work with.

The only other hiccup I ran into was with the Redi-Catches that I use. I had to remove the spring component from them before installing the BBX, as otherwise, the fitment of the magazine was too tight. This is no biggie, as the S-spring on the Redi-Catch is easy to remove.

Aside from the one trigger not working, and needing to pull the Redi-Catch spring, the Blackbeard X worked excellently. How well does the Mantis X app pair with the Blackbeard X?

The big selling point of the Blackbeard X is the integration with the Mantis dryfire apps. If that doesn't work, then there'd be no point in paying extra for it. I'm happy to report that it works excellently. Mantis has a great video on linking the Blackbeard X, and how it works with the app.

The prior Blackbeard worked with the Laser Academy, as that app is tied to the laser system rather than the Bluetooth software. The Laser Academy is a really nifty piece of training software, and uses special targets for doing drills. Those targets can be found here. I enjoy the Laser Academy, however the Blackbeard X's new integration is all about the Mantis X App.

The Mantis X App is calibrated to recognize every trigger press during dryfire, and show the quality of the press. The app has numerous drills built into it, including ones specific to the Blackbeard X. Much like the previous laser Blackbeard models, you can work on your height over bore (HOB), but now you can track your trigger control too. I personally really enjoy the "Pyramid Drill", as it allows you to work on target transitions, your trigger press, and the need to account for HOB. 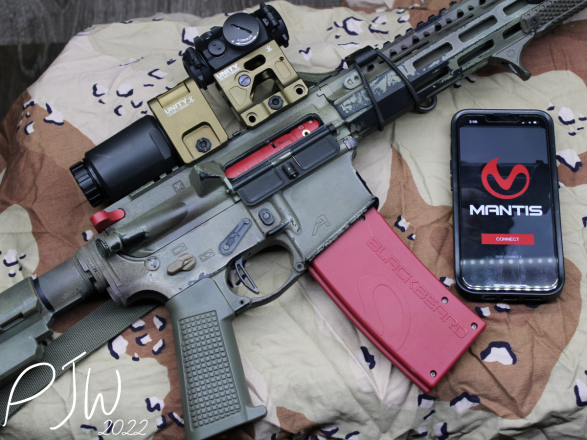 Now, there's only one minor gripe I have with the Mantis X App, specifically due to the AR platform. With handguns that only have two points of contact (primary hand and support hand), your trigger press is extremely important for getting a good shot. However, ARs generally have three or four points of contact, (two hands, shoulder, face). Your trigger press still matters, but a flubbed trigger press at most self defense distances likely won't impact your accuracy much. I still think that the Mantis X will help however, as it can show you the stats of your trigger press, so you can work on maintaining speed, and a good press. Getting better as a shooter means to become a more well-rounded shooter, and I think that the Mantis X App will certainly help.

As an aside, I made us a group for the Mantis X App! We're Primer Peak on the app, so join up, and get dryfiring!

I've already thoroughly expressed how valuable I find the Blackbeard to be. I still believe it to be an excellent training aid, and to help shooters account for HOB while getting trigger reps in. However, the integration to the Mantis X App adds features that I find great, but you may not.

The Blackbeard, and Blackbeard X can be purchased >>>HERE<<<.

MantisX Review: A Dry Fire Tool So You Suck Less

The movies might make shooting a pistol accurately look easy but the reality is that shooting a handgun is one of the hardest skills to [...]

Notice that the Mantis X3 & X10 is shipping was sent out recently and it makes us happy as hell. The MantisX we reviewed a [...]

It goes without saying, but dryfire is an extremely important part of improving as a shooter. Most of our growth comes from quality repetition, and [...]