InRangeTV's What Would Stoner Do? (WWSD) series debuted in 2017, and showed a what if scenario for firearms design. What if Eugene Stoner had components from the modern era, and had to make the AR15 again? The guys at InRangeTV made a list of components that would be on the gun, one of which being a well-made polymer lower. They selected the (now defunct) CAV ARMS GWACS lower as the selected choice. Fast forward a few years, and Brownells and KE Arms have produced a new evolution of the design, the KP15 lower receiver. What are my first impressions on the lower?

What is the KP15 Lower Receiver?

The KP15 is an AR15 pattern lower receiver, produced by KE Arms, and sold via Brownells. It was heavily influenced by the older CAV ARMS GWACS lower, but has some design changes for the better.

The lower is almost entirely made of polymer, barring the standard AR components such as fire control group, pins, springs, etc. Made from two pieces of polymer, the lower is then fused together, forming the finished product. Compared to other polymer lowers, the KP15 was designed from the ground up to be made of polymer, rather than taking an aluminum receiver and simply producing it in polymer.

There are a lot of ways to get a KP15 lower, but I chose the package that came with the mil-spec parts kit installed. After about a week from placing my order, my KP15 was delivered to my LGS, and I was able to pick it up. This is not my first KE Arms product, and the last one was great. What are my first impressions?

After I came home with my KP15 lower, I slapped on an old DPMS A2 pattern upper. I performed a function check, and found my first thing I did not like about the lower. The buffer spring included with the lower was easily the crunchiest-sounding one that I have ever used. Pulling the charging handle back on the lower sounded like stepping on a bag of Doritos, no exaggeration. The buffer itself was fine, but the spring is rough.

The mil-spec trigger included is also one of the sloppiest ones that I have ever used. It is both mushy and creepy somehow, and has some slop in it. It's still very usable, just bad. The safety lever also lacks positivity, but I'll go into why it is like that later.

All of that being said, I kind of expected that going into the package I purchased. I want to give the KP15 lower a good look, not whatever janky mil-spec LPK was slapped into it. Going forward, I changed the buffer spring to the chrome silicon Damage Industries one, but will be keeping the other components stock through the review process.

The KP15 (But Not the Mediocre Parts Kit)

Aside from the LPK being mediocre, the lower itself seems pretty good. It is marketed as being light, and it certainly is. I'll do a weight comparison with a standard and similarly set up lower in the full review, but even with the A2 upper on there, it is more svelte than I expected.

There are some minor flash-molding marks on the lower, but nothing that is going to impact performance. The build quality is generally pretty good for the lower, no complaints from me.

I do like that the lower has built-in sling points, both near the front, and back of the stock section. The slots on the stock at the front can take a QD insert, and the back can use M-LOK for mounting one.  I attached a Magpul M-LOK QD sling mount through the back, and slapped a VTAC Mk.1 sling in place.

The profile of the mag well and pistol grip are great. Mag changes are fast, and the texturing on the grip is just right.

As part of the changes with the KP15, KE had to modify how some parts work. For the takedown pins, they are not held captive in the gun, as there is no way to have a spring and detent in the lower for them. They have their own built-in ball detents, and can be fully removed from the lower. In a similar vein, the spring and detent for the safety have been re-worked for the lower, and are held captive beneath the safety. I'm fairly certain this is why the safety feels a little sloppy. 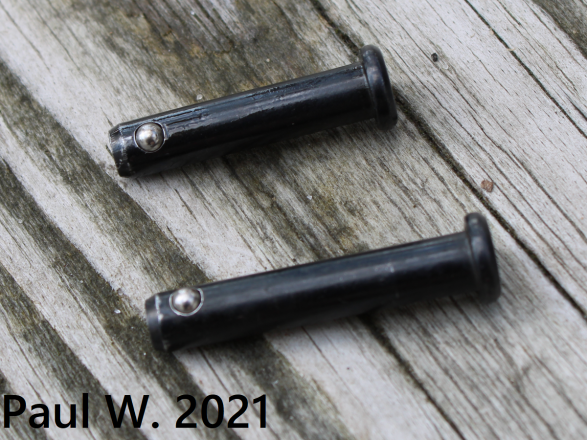 The takedown pins of the KP15, with ball detents visible.

So far, I'm liking the KP15 lower receiver. The lower parts kit is pretty bad, but that is something that can be easily replaced, or just the stripped lower can be purchased. I'm going to keep putting some time and some rounds through the lower, and will have a full review up once I've got more time on the lower.

The world of AR triggers is very, very big. The big dogs of the trigger-verse are companies like Geissele, Timney, and Hiperfire, but the world [...]