Early last year we got a glimpse of the 100% American made Honor Guard line of sub-compact pistols from Honor Defense when Nathan S published a press release just before SHOT Show. At the show, TFB was able to put hands on the pistols both at the show at Range Day. Honor Defense sent one of the sub-compact 9mm pistols to TFB for review to see how they stack up against the 9mm single stack competition.

When I got the pistol in for review I found the pistol packaged in a cardboard box with some simple open cell foam keeping the pistol in place. The Honor Guard was shipped with a second backstrap slightly larger than the one installed on the pistol, one 7 round magazine, one 8 round magazine and a gun lock. 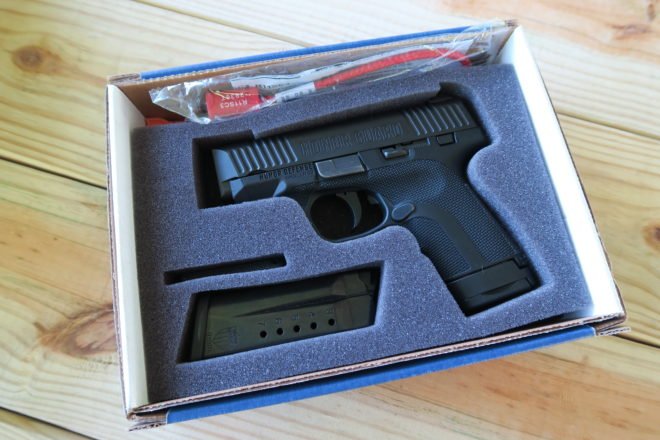 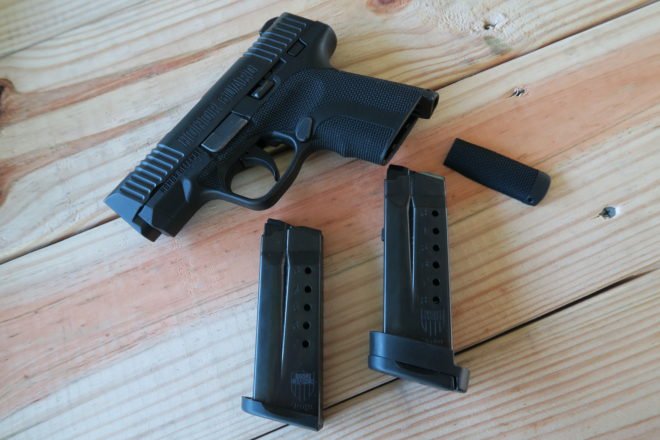 The magazines that the Honor Guard uses are almost identical to M&P Shield mags, the only real difference being where the mag catch is located. The mags come in both 7 round flush fitting and an extended 8 round variety. 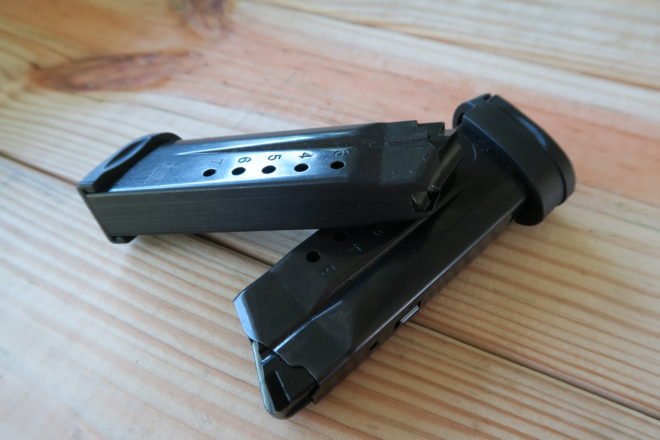 Takedown of the pistol is a pretty familiar operation if you own an M&P. Rotating the lever down with the slide locked back frees the slide and allows you to break the pistol down without pulling the trigger. In the photo below you also get a good view of the large ambidextrous magazine release as well as the very small slide lock.

When I spoke with Honor Defense they indicated that the two small block off plates are where the manual safety will be located. If you buy an Honor Guard without the safety but would like one they will be offering the safety as a separate part that can be installed by a gunsmith around Thanksgiving time. 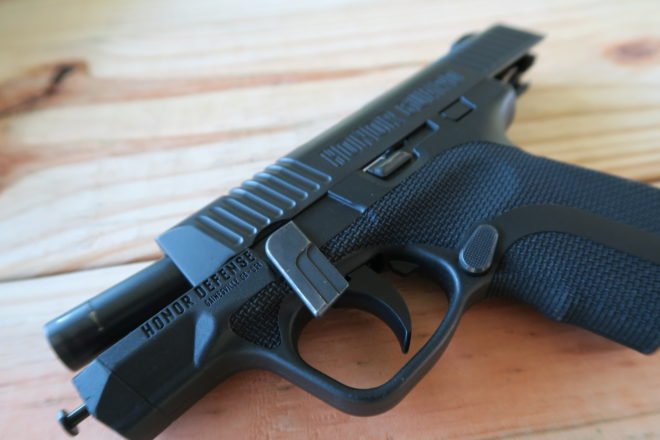 Field stripping the Honor Guard is nothing out of the ordinary with the exception of the very stout non-captive recoil spring. Some reviewers have expressed a bit of concern about the possibility of losing grip on the spring and it taking flight, I can agree that that is a very real possibility and would have liked to see a captive arrangement.  Honor Defense has indicated that they are investigating a captive spring arrangement and may make that standard based on consumer feedback. 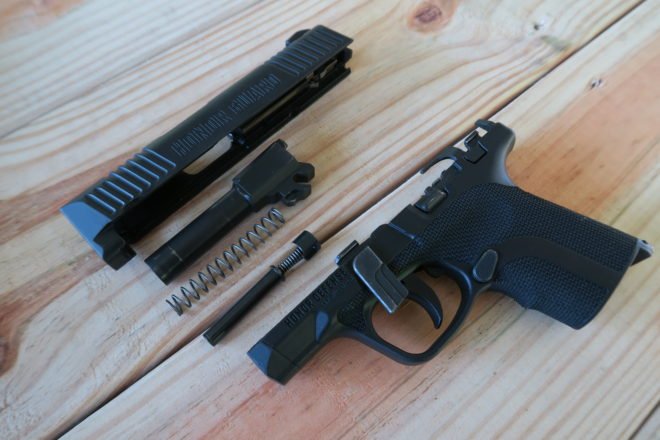 Taking a look at the striker assembly it appears to be well thought out and robust, I found it interesting that the entire assembly is removable as one piece. Removal of the striker is very easy, by removing the endplate it slides out as a unit. 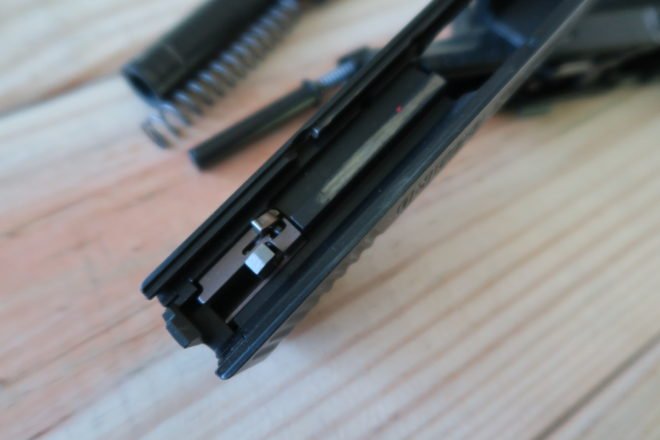 The Honor Defense was designed to be modular from the ground up is the removable P320 style frame insert, by removing the takedown lever the metal chassis lifts out of the frame. Looking the pistol over it is very apparent that the designers hold the P320 in high regard, there are influences all over the gun. Honor Defense has plans to make the F.I.S.T. frame available separately as well as other grip frames, the removable action will allow shooters to switch to other style frames quickly and easily. 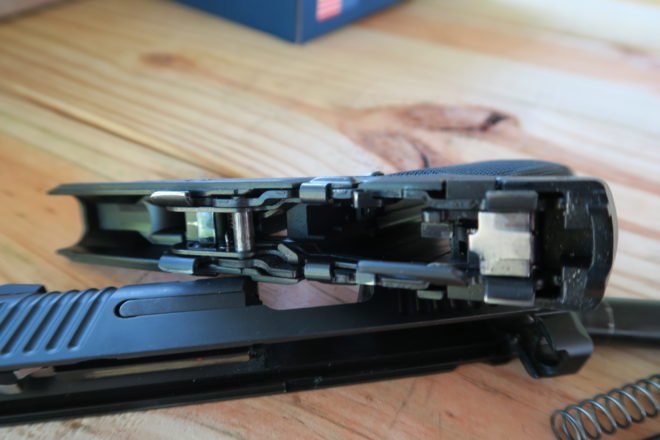 I found the checkering that Honor Defense molded into the frame feels a lot like aftermarket stippling and provides an incredible amount of grip while being smooth enough to not be uncomfortable when carrying the pistol concealed.

The amount that this pistol borrows from other single stack pistols is one of the Honor Guard’s greatest features. Sure the simple takedown, ambi controls, and the nice checkering are great but many shooters will be happy to know that sight upgrades are readily available because the Honor Guard uses Glock 43sights. You might also have noticed that the pistol shares its basic shape with the M&P Shield making holster selection thankfully a snap, there is nothing as annoying as owning a great pistol that you can’t find a proper holster for. 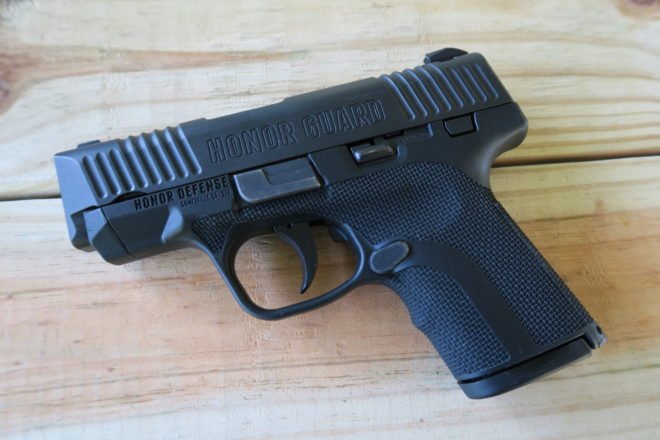 Shooting the Honor Guard was a rather enjoyable experience, apart from some small gripes I have about the gun I am pretty sold on the pistol. Recoil was pleasant and not near as snappy as I expected, I imagine that has a lot to do with that stout recoil spring. 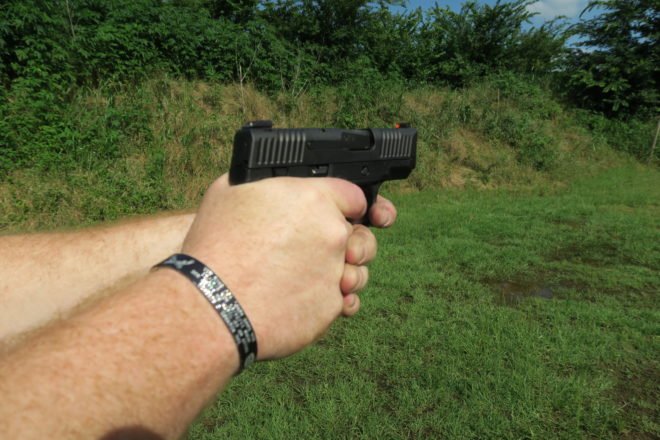 I took some shots from about 25 yards on an 8″ steel plate and was able to connect with most of the shots I took. The factory high viz front sight is a nice touch and not something that you would normally get when buying a new pistol. 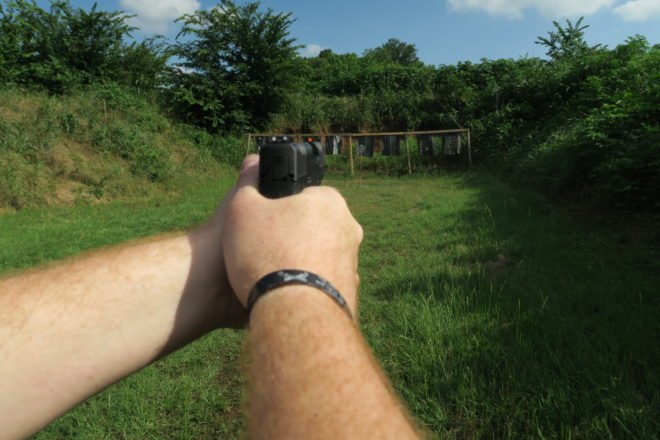 A bit of accuracy testing from about 5 yards revealed a pretty accurate little carry gun. The 5 shot groups were pretty consistent at about 2″-3″ in my mediocre hands. The trigger was a bit on the stiff side at about 7 pounds and the reset is almost a full extension but I didn’t find the trigger pull to be detrimental to accuracy as you can see below. 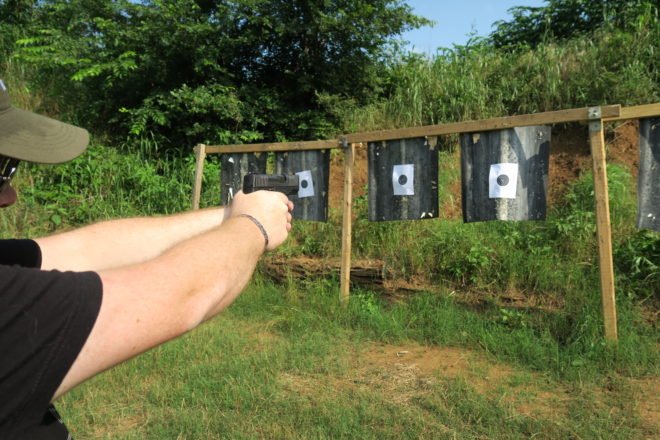 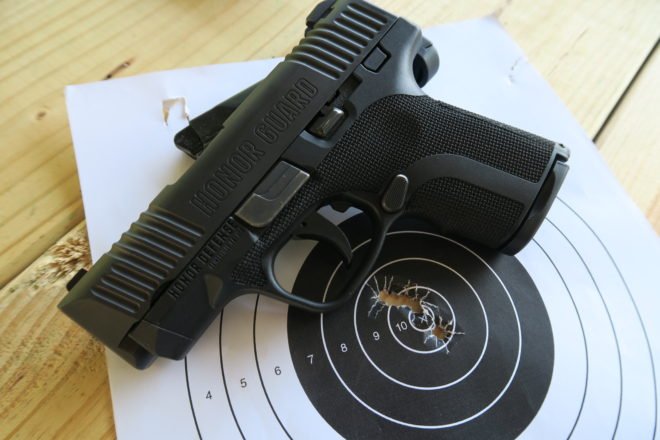 So what do I think? I think the Honor Guard is a pretty solid little carry gun and am pretty excited to see what else Honor Defense brings to the market. During my conversation with Honor Defense, they indicated that there are other calibers in development with plans to introduce a .45 ACP version next year as well as the possibility of a .380 variant. They also indicated that a threaded barrel is in the works as well as confirming TFB’s suspensions of a long slide variant due this fall. My only grips about the pistol are the finish quality on the controls, the non-captive recoil spring and the long trigger reset. The price is a bit higher than one might imagine with an MSRP of $499, but street prices seem to be much more palatable at about $400.

If you would like to learn more about the Honor Defense Honor Guard you can check out their website here.

This post originally was run on The Firearm Blog - http://www.thefirearmblog.com/blog/2016/06/24/review-honor-defenses-honor-guard-pistol/