The world of AR triggers is very, very big. The big dogs of the trigger-verse are companies like Geissele, Timney, and Hiperfire, but the world is expanding. Competition and hard-use guns need good triggers, and KE Arms stepped up to the job with the SLT-1 and SLT-2. KE Arms may not have the same size as the titans of the industry, but does their quality match or beat their competitors?

The SLT-2 is a drop in single stage AR trigger from Arizona based KE Arms. KE has been around for a while, making many components for the AR and Glock platforms, along with many other parts for various guns. The SLT-1 was a big innovative product from them, and the SLT-2 is the next iteration in the line. The SLT-2 features a flat faced trigger, with an advertised crisp pull weight of 4.5 pounds. 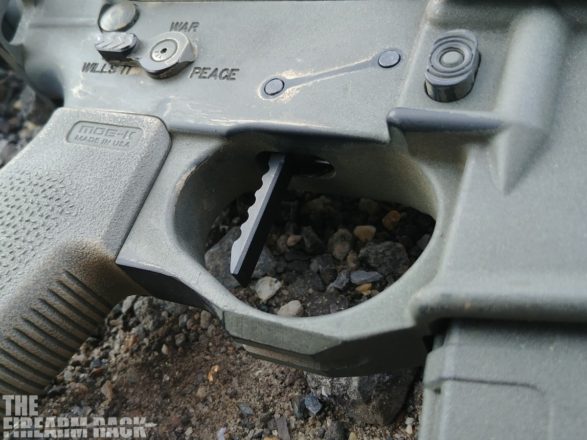 SLT stands for "Sear Link Technology". Essentially, the trigger unit lacks a disconnector, so the hammer only contacts the sear within the trigger pack. Without getting too technical, this means that in function, the trigger resets quicker, and has a better, crisper feel. This is truly an advancement, as most people probably haven't even thought of getting rid of the standard disconnector. Russell Phagan of KE Arms has an excellent video describing the function and testing process that went into the making of the SLT series.

Where To Buy The KE Arms SLT-2

Installation of the SLT-2 was fairly simple. From start to finish, the installation process took me about 10 minutes after watching Russell Phagan's install video on YouTube.

After verifying that the AR is unloaded, remove the upper receiver from the lower receiver. From this point, remove the pistol grip, retaining the grip screw, and the safety detent and spring. Remove the safety next.

Once those components are out of the lower, remove the pins from your current trigger group, and remove the trigger group itself. From this point, the SLT-2 can drop right into the receiver.

Before you reinstall the SLT's pins, you want to reinstall the safety, and the grip onto the lower receiver. Once all of those components are back in place, the trigger group pins can be installed. Reattach the upper, and perform a function check.

The SLT-2 is housed within an enclosed, "cassette" style trigger housing. This allows for an easy install, and protects the internal components from gunk, and carbon fouling. The design of the SLT-2 is cutting edge, and the features of the trigger follow that too. With the lack of the traditional disconnector, the SLT-2 allows for the safety to be placed on safe while the hammer is down. Standard profile AR triggers with normal disconnectors will not allow this, but the extra safety features are welcome.

The SLT-2 and SLT-1 are rated for most AR lower receivers, barring a few exceptions:

The SLT Series of triggers is not compatible with:
Combloc 7.62x39mm Ammo
Sig Sauer MCX with Firing Pin Safety Features
Some .22 Rimfire AR15s and conversions

For the duration of my testing period, the KE Arms SLT-2 rode in my Spikes Tactical AR lower, with an 11.5" barreled Aero Precision upper receiver group.

I dryfire a lot. I'm a firm believer that most of the shooting skill building come from dryfire. I dedicate a chunk of time each night to handgun dryfire practice, but have also been setting time aside for AR dryfire too. Before I shot a single round with the SLT-2, I had at least a 1,000 dryfire reps with it. The initial feel of the SLT-2 was phenomenal; short travel, light pull weight, and an extremely crisp reset.

Shooting the SLT-2 was exquisite. I'm already a fairly quick shooter, but with the SLT-2, I was a little bit quicker. Much of the testing of the SLT-2 was done at 50 yards and in, with lots of target transition drills. Shots were fast, with short split times. El Presidente and Mozambique Failure to Stop drills were made a little easier, with the only thing slowing me down being recoil. Compared to the ALG Advanced Combat Trigger that the SLT-2 took the place of, my splits were generally .1 to .15 seconds faster per shot according to my shot timer. That time gain adds up quite fast.

To describe how the SLT-2 felt while shooting, it was oddly "sterile", for a lack of a better word. The SLT-2 felt less like a standard trigger, and more like a button. "Do you want to shoot the gun? Press the button if yes, do not press the button if no." I didn't have to think about my trigger press with this trigger, as it was so smooth, short, and crisp with every press. I was a little worried the trigger being a short, single-stage would make shooting at distance harder, but I was able to make consistent hits out to 300 yards on steel. Would a two-stage trigger be better at this? Maybe, but I was quite happy with my performance out of my shorty gun with the SLT-2 at any distance.

Over the testing period (1,500 rounds/4 range trips), I had zero malfunctions, and zero problems with the SLT-2. At the end of my testing period, the trigger had the 1,500 live fire rounds, and about 2,500 dryfire presses on it. Using a Timney trigger pull scale, the SLT-2 averaged a 4.25lb pull weight, from the mean of five trigger pulls.

Now, the question comes to flat faced vs. curved trigger. After my testing period with the SLT-2, I am sold on the flat faced trigger for single-stage triggers. I don't plan on tossing away any of my curved triggers, but I'm much more open now to more flatties in my life than I was before.

After my time with the SLT-2, I can see why Ian and Karl of InRangeTV chose the SLT series as the approved What Would Stoner Do trigger.

Would I Recommend The KE Arms SLT-2?

The KE Arms SLT-2 is fantastic. It provides unique features, such as a lack of a disconnector, and the ability to put the gun on safe while the hammer is down. Performance of the trigger is also phenomenal, being one of the best single stage triggers that I have ever used. KE Arms knocked it out of the park with the SLT-2, and deserve to have a seat in the AR trigger pantheon.

I would recommend the KE Arms SLT-2 in a heartbeat. For the set MSRP of $199.95, the SLT-2 is better priced, and a great value in comparison to similar performing triggers. For single stage triggers, I don't think that you can really do better than this.

InRangeTV's What Would Stoner Do? (WWSD) series debuted in 2017, and showed a what if scenario for firearms design. What if Eugene Stoner had components from the [...]