The internet is full of people trying to cut costs to find something "just as good" as tried and true options. Folks crying that $80 for a holster is outrageous, and a $400 optic is highway robbery. In morbid curiosity, I decided to walk a mile in their shoes; this time trying to find the cheapest slide mounted optic. This led me to the UTG Micro Reflex for a cool $58.99. Later I snagged a second example for $71.75 to check consistency between the two.

UTG Micro Reflex Construction and Use

In traditional Micro Red Dot Sight (MRDS) form, the UTG Micro Reflex is mounted using two screws through the body into the top of the pistol slide. Unlike most MRDS, this optic uses the dated Docter footprint. Docter is a strange choice, as the Trijicon RMR and Leupold DPP have gained much wider acceptance in recent years. With this in mind, shooters may have difficulty finding compatible firearms for this optic outside of Glock MOS style plates.

The finish is immediately noticeable as cheap with inconsistencies across the body of the optic. Upon unboxing, the housing is dirty, with debris needing wiped off. A poor finish is expected at this price point, but a dirty optic is a little surprising.

A downside to the UTG Micro Reflex design is the large emitter housing. This large hump in the optic obscures the bottom of the lens, reducing your available sight picture. Based upon distortion along the top and sides of the glass, losing the bottom of your window may not be all that bad. That being said, you'll still experience a slight loss of situational awareness, and have a slightly larger blind spot during your presentation. This also obscures the majority of your sight picture with irons unless using extra tall sights such as the Dawson Precision MOS.

UTG ships the Micro Reflex with two CR2032 batteries, which is a nice touch. Tools for mounting and adjusting the optic are included. There is also a gigantic cleaning cloth that feels like it would scratch the lens if used.

UTG includes an adapter for use on rails with the Micro Reflex. This seems to use Weaver rails instead of the more common 1913 picatinny rail, but I had no issue mounting it to picatinny in testing. This mount uses a thick crossbeam to lock in, instead of solely relying on the retention screw like with most optics. 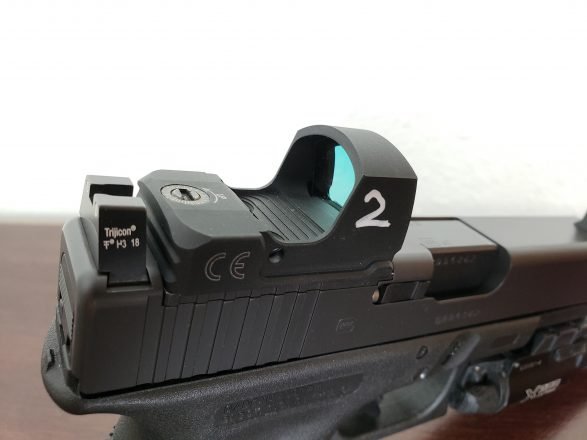 Each side of the UTG Micro Reflex features a small drainage hole to prevent the emitter from becoming water logged.

Batteries mount from the bottom of the optic. This necessitates removal of the entire Micro Reflex in order to change batteries. The inside of the battery compartment is magnetic, helping to prevent bobbling of batteries. A minor feature, but an appreciated one not found on many more expensive options.

The UTG Micro Reflex features an auto shutoff feature to preserve battery life. This occurs after roughly 3 hours of use without input from the user. There is no motion sensing technology, meaning that the optic WILL turn off after a few hours unless you manually adjust brightness. Illumination Memory should remember your last brightness setting when turning on the Micro Reflex, but this has not always been the case in my experience.

The UTG Micro Reflex gives 1MOA adjustments with each click for elevation and windage. A simple flathead screwdriver or case rim can be used to adjust zero. One example did not have enough adjustment to get rounds on target, rendering the optic useless.

There are 6 brightness settings on the UTG Micro Reflex. Clicks are audible and tactile for zeroing, and brightness. None are hard to see indoors, but are not bright enough for outside use in direct sunlight. Bright indoor light may pose a problem, even on the highest setting. There is no night vision capability with this optic. The two highest settings are where my examples typically live for effective use.

Brightness is adjusted using a single side mounted button. Brightness starts at the max, then descends to the lowest setting. Once bottoming out, another click will immediately return to maximum brightness and begin descending again with subsequent presses. One example seems to take a few seconds to adjust, with the other being instant.

UTG lists the Micro Reflex as having unlimited eye relief, but this is not the case. Both optics experience serious parallax issues along the top and sides of the glass, with deviations of an inch at distances as close as four feet. This is only magnified as distance increases. Optic #2 has substantial distortion along top and sides of glass, bending the image to the curvature of the lens. This distortion is not present in optic #1. Keeping the reticle within a small area in the center of the glass prevents deviation of rounds. This means that you have substantially less room for aiming than the window size would lead you to believe.

Both examples have a blue tint, roughly comparable with that found in the Trijicon RMR. Optic #2 features significant gradient in the tint from left to right of glass. This goes from nearly clear on the left, to the darker tint on the right. Due to variations in the tint in Optic #2, the intensity of the reticle varies based upon its' placement within the glass. Optic #1 does not have this gradient issue.

The UTG Micro Reflex features a 4MOA single red dot reticle. Neither optic is very crisp for my eyes, being more of a starburst than a dot. Lower brightness settings help to clean up the edges, but the reticle is still poorly defined. Overall it is less crisp than any "duty grade" optic I own, but superior to the NcStar FlipDot reviewed here in 2019.

Only one optic made it to live fire due to issues zeroing the second example. Initial firing was done using the rail mount on a Ruger PC Carbine due to concerns for durability. Later the UTG Micro Reflex was moved to a Glock 19 using the MOS system.

During firing on G19 the optic would occasionally increase brightness under recoil. Once at the beginning of the first Glock range session the optic shut itself off between strings. I am not sure what caused this, as it only happened a single time. Repeatedly I fired enough rounds to make metal parts of G19 unpleasant to touch from heat. This seemingly had no negative effect on the Micro Reflex's function.

Despite issues with the glass, I was able to keep rounds on a B8 bullseye out to 25 yards. When using the guillotine technique with the emitter off, I can consistently pass The Test with scores in the high 80s to low 90s.

I am not one to conduct "torture tests" on my own equipment. Gear is expensive and I don't want to break my stuff, so I leave that to other folks. That being said, with the low cost of this dot, I decided to give it a try. If the UTG Micro Reflex died, I wasn't out much cash. If it lived, that'd be an interesting anecdote.

To kick things off I started with some pseudo-environmental testing. The first optic was placed in my freezer for 6 hours, reaching a temperature of roughly 0 degrees Fahrenheit. Next is was left in my car in direct sunlight for 4 hours, reaching approximately 132 degrees. Neither of these resulted in noticeable damage to form or function.

After some goading from my fellow writers, I decided to do a drop test. With optic #2 being a complete lemon, I had nothing to lose by doing so. The UTG Micro reflex was mounted to my Glock 19. A shoulder height drop onto my concrete garage floor was in order. I was hesitant to hurt my pistol, but it's a sacrifice I'm willing to make for our audience (you're welcome!). Upon impact I heard a snap followed by pieces scattering across the floor. Dread immediately fills me, as those sounds were distinctly not glass shattering or an optic breaking free. The optic is virtually unscathed, but my front sight, from Trijicon, in two pieces.

IrOns NEveR FAiL, right? I knew this was a bad idea.

After this I decided to hammer-fist the Micro Reflex into the floor twice. Hopefully this would protect my pistol while imparting more force onto the optic. No dice. The top of the housing is a little scuffed, but the electronics and glass are intact. Not only that, but it held zero as well. Rob Ski would be proud. Even this lemon of a budget red dot survived all the beatings I was willing to give it.

I am truly shocked that the UTG Micro Reflex survived over 300 rounds on the slide of a pistol, plus additional abuse. I assumed it would be beaten to death in a magazine or two. Both optics live, and the good one has since been transferred to a Blue Gun for dry practice. I'd like to continue testing, but I also don't want to ruin a good thing when I have a purpose for it.

Would I recommend the UTG Micro Reflex? No, I wouldn't. If both had performed as well as optic #1, then I would change my tune, for certain applications. A $60-70 optic that runs would be awesome for a cheap competition gun or dry fire tool. With only a 50% reliability rate, I'm not sure which is more reflective of the average performance, and that's not something I want to suggest to people. I'll send in the lemon for warranty and update you here with further results.