Leupold is one of the biggest names in firearm optics. For years, their DeltaPoint line of miniature red dot sights (MRDS) was one of two viable options for use on handguns. However the landscape is continually growing, resulting in several competitive options on the market in 2020. The DeltaPoint Pro (DPP) is no longer cutting edge, so how does it compare to more modern offerings?

Leupold DeltaPoint Pro Construction and Use

Much like with the Trijicon RMR, mounting is via two screws through the body of the optic, but this is where similarities stop. The DeltaPoint features its own footprint, but compatibility is widespread. The military's new M17 and M18 pistols, based on the SIG Sauer P320 use the DPP footprint, as do legacy SIG Romeo MRDS.

A single 2032 battery powers the DeltaPoint Pro. Changing batteries is a breeze, as the compartment lives on top of the optic. The hatch of the compartment is magnetic, preventing batteries from spilling out during replacement. A small locking tab keeps the housing sealed, which can be manipulated with the rim of a casing.

My one criticism of the DPP battery compartment is the spring for the hatch. This small spring rusted within 6 hours of being exposed to rain during Shooter Symposium. The rust appears to be cosmetic, as compartment can still be easily opened, but my confidence is slightly shaken. Luckily the housing itself seems to be a little more rust resistant. With one exposure to rain, along with being carried concealed for several weeks, there isn't a bit of corrosion on the rest of the optic.

Quick changing batteries are advantageous under any circumstances, but especially so with the DPP, as battery life seems to vary greatly. Some users report having to change the battery every few months, with others lasting over a year. I personally change mine every 6 months, though the DeltaPoint is not my primary MRDS.

To help improve battery life, Leupold has included Motion Sensor Technology. If the optic lays completely at rest for 5 minutes it goes into sleep mode. Any movement will reactivate the dot, unless it has been manually powered off. Due to this, battery life varies greatly between safe queens and guns carried regularly. Neither myself, nor any other shooter has been able to outrun the motion sensor of the DeltaPoint Pro. Even those with lightning fast draws still found the dot active when bringing it into their vision.

At the rear of the optic there is a small vertical slot. This is for the addition of an integral, fully adjustable rear sight.  The DeltaPoint is taller than most MRDS, which prevent the use of conventional suppressor height sights. Some companies offer even taller suppressor sights for use, though you're limited on compatibility. I have not used this integral sight, as my FN 509 Tactical's irons are sufficiently tall.

The window on the DeltaPoint is exceptionally large, and one of its major selling points. Shaped like a loaf of bread, the profile of the DPP is instantly recognizable. The glass is slightly taller and substantially wide than other "duty grade" options. This larger size aids in sight acquisition for new shooters, and during unconventional positions shooting where proper alignment cannot be had.

The loaf shaped window is inherently less durable than the patented "bat ear" design of the Trijicon RMR. To prevent catastrophic damage, Leupold includes a small protective shield around the outside of the housing. This is similar to the design of Eotech rifle optics, with the shield taking the majority of a blow, hopefully saving the glass. Shooters can see a slight gap between the two while aiming, though it is not distracting during live fire.

The biggest downside of the Leupold DeltaPoint Pro is its durability track record. Compared to the Aimpoint ACRO, Trijicon RMR, and Holosun 507c, the DPP sits at the bottom in this regard. This is partially due to the inferior shape of the housing, but also due to its electronics. For reference, Mike Pannone says the average DPP life is 5,000 rounds before electronic failure in his experience. Aaron Cowan broke his examples at roughly 1,500 and 4,200 rounds during drop tests.  Members of my USPSA club get roughly 9,000 rounds before electronic failure from recoil. For comparison, the RMR sees roughly a 50,000 round life on average. Holosun models and the Aimpoint ACRO perform similarly to the Trijicon.

Brightness adjustment on the Leupold DeltaPoint Pro is a bit cumbersome. A single button sits atop the battery compartment which controls brightness in the optic. The button is large, slightly under the size of a CR2032 battery. There is a good amount of tactile feedback, ensuring you can feel when the button is depressed. To activate or turn off the DeltaPoint, all shooters need to do is hold this button down for a few seconds. There are 8 brightness settings in the DeltaPoint Pro. Unfortunately for Operators and LARPers, the DPP lacks any night vision settings. Brightness is sufficient for shooting in direct sunlight however.

At setting 5 and higher, there is a substantial amount of spill into the glass from the emitter. This results in a large amount of red light, in a corona effect, surrounding the reticle. The reticle is much more intense, and virtually impossible to confuse with the corona, this clutters the window, degrading your sight picture.

To adjust, you typically cycle from the lowest setting to the highest. After reaching max brightness, another press will cause the reticle to flash. From there you must cycle from highest to lowest. Wash, rinse, repeat. However, this is not the only method of adjustment.

To keep from running through the whole adjustment cycle, simply press the brightness button down for two seconds, then release. This will reverse the cycle at whatever point you happen to be at. Trying to set it at 5, but accidentally pressed again to 6? Simply hold the button for two seconds. Now you are moving downward with each press. Hold again to reverse upward. This technique is something I learned in the course of writing this review after re-reading the manual. For years I've heard reviewers complain about having to cycle through every setting, and took that as gospel. DPP users, rejoice, adjustments just got easier!

Adjustments for zeroing are straightforward. Both windage and elevation turrets feature a notch for use with a flathead screwdriver or the rim of a 9mm case. Clicks are positive, with both audible and tactile responses. Each click is 1MOA, putting it on par with the Trijicon RMR in terms of precision. Movement takes effort, but is not a challenge. Zero remained in place across battery changes and throughout firing.

Glass on the DeltaPoint Pro lacks any substantial tinting. This is a major sticking point for many shooters who cannot stand the blue hue of the RMR. Due to the reduced tint, the optic is forced to increase output in order to get similar levels of brightness as more heavily tinted glass. This increased output is the major reason for the lower battery life on the DPP compared to other optics. 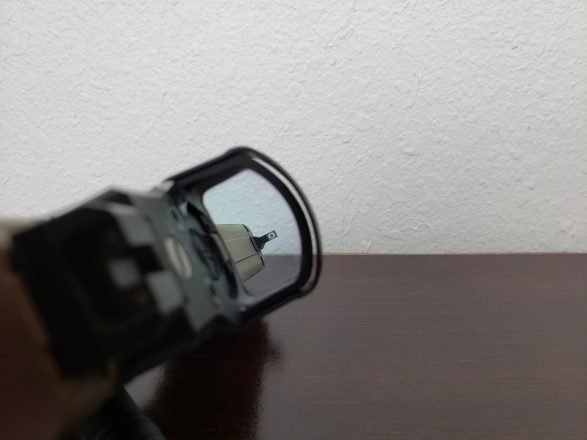 Unfortunately the DeltaPoint also comes with some of the lowest clarity glass I've seen in serious use MRDS. This negates the lack of tint, as the sight picture is degraded from poor quality glass. Of the major optics I own, I'd place the DPP at the bottom in this category. This isn't much of a factor when firing rapidly, but is noticeable during certain lighting conditions, and slower precision shots.

There is virtually no distortion in the glass of the DeltaPoint Pro. This optic is one of the best in my collection in this regard, with only the ACRO surpassing it. The lack of distortion helps to ensure accurate shot placement, even with the reticle on the edges of window.

Shooters have the choice of either a 2.5MOA or 7.5MOA dot reticle. My model is the 2.5MOA, as my preference is the smaller dot. The DeltaPoint's reticle is the least crisp out of the others in my collection. To my eyes, it appears as a rather large starburst, extending in every direction. The crispness of the reticle is extremely subjective, with individual optics varying from person to person. I highly recommend getting eyes-on with whatever you're considering before making a purchase. No two shooter's eyes are alike, and that changes how the dot will appear to you.

For the duration of testing the Leupold DeltaPoint Pro sat atop my FN 509 Tactical. Aside from initial zeroing, the first shots from this optic were during Scott Jedlinski's class at Shooter's Symposium. A fellow shooter had his optic go down before class, and I loaned him my gun. The DPP experienced rain, starting as sprinkles and moving to a torrential downpour during class. While it was carried concealed throughout this time, it was directly exposed to heavy rain during shooting.

Aside from the occasional range trip, both the gun an optic became safe queens until recently. I carried this combo during a weekend of training with the legendary lawman, Chuck Haggard. 150 rounds were sent down range during a low light course, with an additional 300 during his close quarters handgun.

The large window helps to keep the reticle within your sight picture during recoil. Solid recoil control can prevent losing the dot with any window, but the extra wiggle room certainly helps. This is especially noticeable when firing one handed, which was the case for most of Haggard's low light course.

The only issue I experienced with the DeltaPoint Pro during shooting was a reflected false dot. With brightness up to account for sunlight or flashlight use, a secondary dot appears outside of the normal sight picture, I believe from the reflection of the actual reticle. The false dot is larger and less intense than the actual reticle, but this resulted in some missed shots from confusion. It can only be seen under certain lighting conditions, and when the optic is at certain angles, typically pointed high. The two are never in the window at the same time.

I noticed this in low light shooting, trying to get rounds off quickly. My hits for one iteration struck the top edge of the target at 7 yards instead of high center chest where the false dot was covering. Mitigate this by slowing down and focusing on your sight picture. After realizing my mistake, it never happened again.

Overall the Leupold DeltaPoint Pro is a decent choice, but not one that I typically recommend. In terms of "duty grade" optics, the DPP sits at the bottom of the list for most features. Despite this, it still is capable of securing contracts from serious use agencies. It's the worst of the best, but still stands above most "budget" tier optics, which somewhat justifies its $400 price tag.

For serious use, the ACRO, RMR, and 507c dominate the DPP. For casual range use, the 507c still beats the DeltaPoint due to its increased durability and lower cost. Unless someone absolutely needs a larger window or is restricted by footprint, I cannot think of a reason to suggest the Leupold DeltaPoint Pro over the competition.

Like Loading...
About Daniel Reedy 179 Articles
Daniel is a Range Master Advanced Instructor, and USPSA competitor. He has received training from Craig Douglas, Mike Pannone, and Scott Jedlinski among others. In his free time Daniel enjoys petting puppies and reading the Constitution. Daniel also writes for the Kommando Blog

Copyright © 2020 Firearm Rack All Rights Are Reserved. See the copyright notice page for attribution requirements.
Affiliate Disclaimer: Firearm Rack is funded through direct donations and affiliate programs where the retailer pays a small portion of the sale to the site for the referral.