Much like how Colt wasn’t the first to make a revolver, or Ford a car, Trijicon was not the first to put a Micro Red Dot Sight (MRDS) onto a pistol slide. Despite this, they are synonymous with the type and are often confused as the first pioneers in their fields. Trijicon has been in the optics game for a long time, frequently found leading the pack, and this is no different with their Ruggedized Miniature Reflex (RMR) sight.

But What Does It All Mean?

First a short comment on the advantages of using optics with pistols. With traditional iron sights, the shooter is working with three planes to get accurate hits on target; the rear sight, the front sight, and the target. Because of how human vision works, we can only focus on a single plane at a time. Most instructors and high level competitors agree that an aggressive front sight focus is the way to go. In simple terms, your front sight dictates where your bullets go, so you should be sure of its placement in relation to the rear sight. This causes the target to become out of focus, making it difficult to appropriately interpret changes to your target and its surroundings.

When using an RMR or similar optic, you operate off of one focal plane—the target. Shooters focus on the target, allowing the reticle to project itself into your vision. Additionally, instead of focusing on the iron sights, the shooter now has a literal window to look through, further increasing situational awareness. This allows for better reactions to the changing situation, and more precision when firing. For an in-depth understanding of how handgun optics work, check out Aaron Cowan’s Whitepaper on the subject.

I’ve been using my Trijicon RMR RM06 (3.25 MOA reticle) for nearly a year at this point. Mounted on a Brownells Glock 17 slide for the entirety of use, I’ve experienced zero mechanical or electrical issues with the optic. During this time I have changed the battery once. Despite potential years of life, as I am in the “every 6 months to 1 year with an RMR” camp for battery replacement. 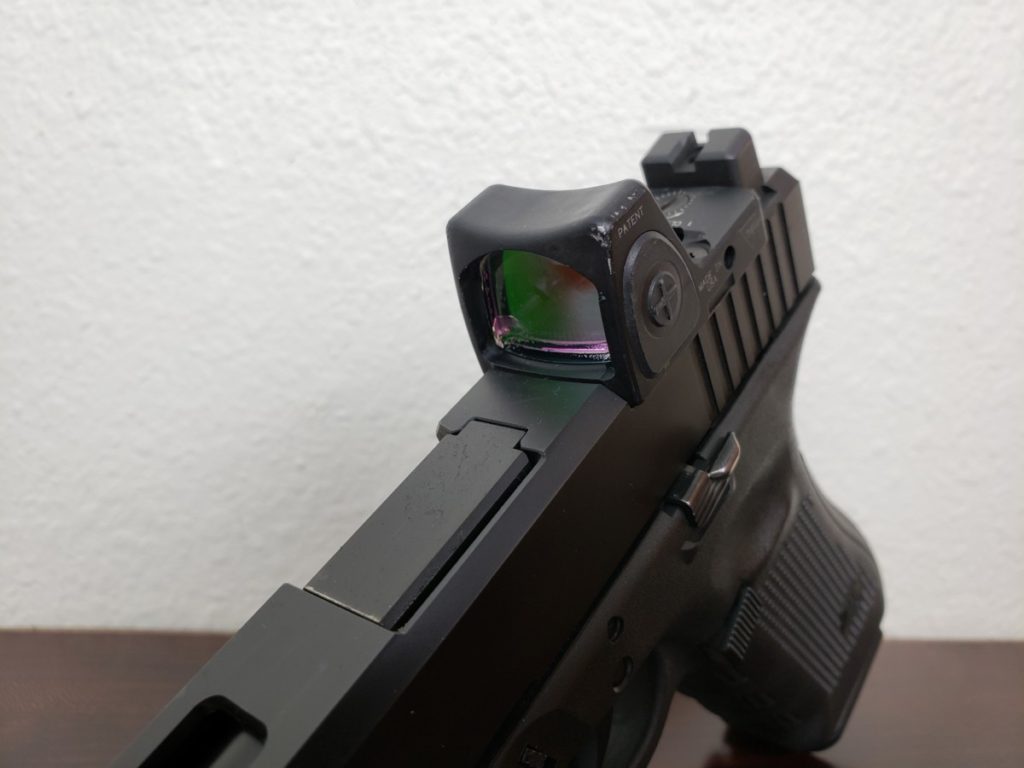 This configuration currently has a little over 5,000 rounds of 9x19mm through it. While this list is not completely comprehensive, these are the most common rounds fired through the gun:

Being my daily carry for six months, there is preventative maintenance that must be regularly performed. Being an open style optic, the rear of the lens is exposed to the elements, along with the emitter. This means that lint, hair, and other debris can find its way into the lens, obscuring your sight picture. While this does occlude the optic, it has never rendered the RMR unusable. An occasional blast of canned air solves the majority of this issue.

For more in depth cleaning, I prefer Cat Crap lens cleaner. Applied using a Q-Tip, this waxy material helps to protect the glass and restore clarity. Depending on the conditions, I apply Cat Crap somewhere between bi-weekly to daily for adverse conditions. Just a dab will do you, so I expect the container to dry out or go missing before becoming empty.

Have You Ever Seen the Rain

One of the biggest complaints the internet makes about the RMR and similar optics is its open emitter. Saying that light rain will ruin the emitter or obscure the dot. Others claim that the lens will act as a shovel, allowing the optic to be occluded by dirt, mud, sand, and other debris. This isn’t wrong, but I think it’s a little unrealistic—at least to the degree people take it. I have taken two classes that involved shooting in the rain with my RMR, and had two very different experiences.

Class Time with the Trijicon RMR

During my time with Scott “Jedi” Jedlinski at Shooter Symposium, the weather went from a drizzle to torrential downpour. I had my pistol in a concealed in a Tenicor Velo. For the course of fire, I would draw my pistol, fire, then immediately return to the holster once the “threat” was neutralized or the drill finished. Time out of the holster was minimal, and the gun was kept largely horizontal. I experienced zero issues due to rain.

At the Rangemaster Instructor Development Course, I carried the same gun in the same way. Tom would have us fire, then keep our guns at a significantly depressed low ready for a substantial amount of time before reholstering. Time at low ready was in the range of 10-30 seconds or more at a time. This allows for rain to gather on the rear of my lens. This causes the dot to scatter and starburst among the water droplets due to the dot being projected onto water instead of glass.

Recoil causes the water to fly off the glass and change shape, resulting in a different sight pictures with each round. Trying to wipe of the lens with wet fingers and clothes makes matters worse, creating a smearing effect. I still passed both courses of fire, and could get good hits out to 25 yards, but the difficulty was increased substantially. My front sight was difficult to see in the low light through the tinted RMR window.

Regarding the “shovel” issue, how often are you in areas of dirt, sand, and mud? Your emitter is exposed,and it could certainly become occluded, but so could your rear sight notch. Luckily, there are techniques to overcome this, outlined by Aaron Cowan here. In short, simply bisect your target with the hood of the RMR and you’ll get hits. I was able to pass The Test on my first attempt using this method, and have only improved from there. It works with other optics as well, but is most effective with the RMR due to its shape, bracketing the target with its “ears”.

The RMR mounts directly onto your slide via two screws that pass completely through the body of the optic. Screw length is determined by your mounting solution, with Glock MOS, Brownells slides, FN 509, etc each having their own ideal length. 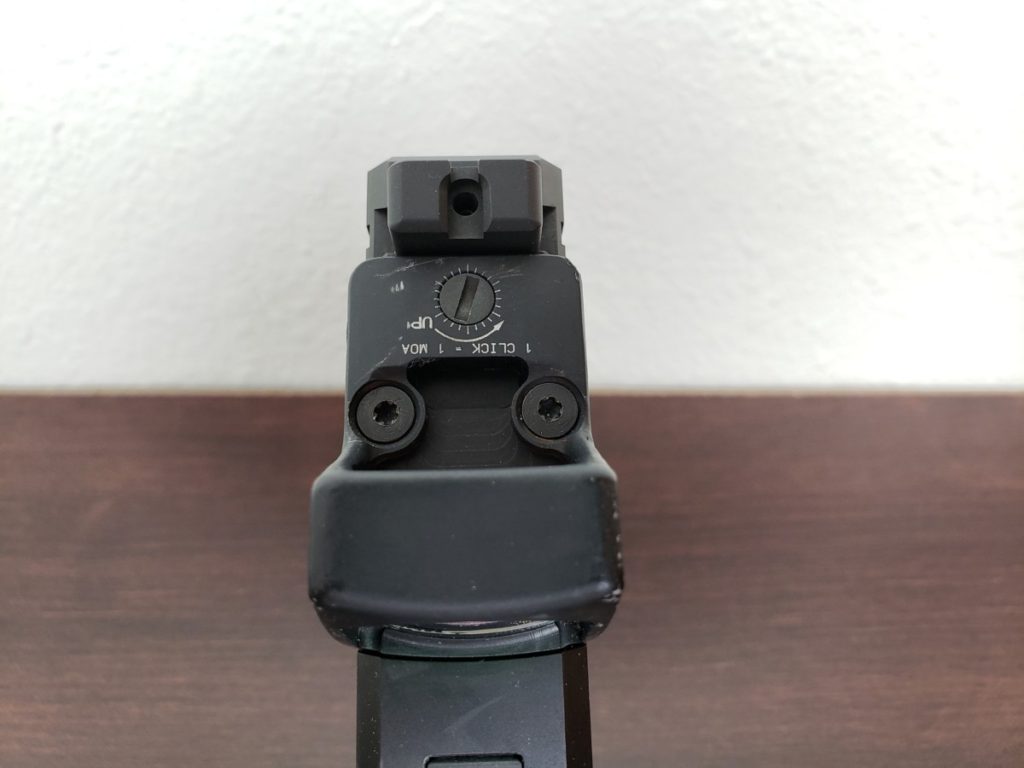 Let the Light Shine on Me

My model features user adjustable brightness. This is done by pressing either the + or – buttons located on the sides of the hood, with + being on the left side, and – right. There are 8 brightness levels. I usually keep mine around 6 or 7 for outdoors in daylight, and 5 or 6 for indoor shooting. 4 or 5 is good for low light, with the higher being less likely to be washed out by my X300U.

I find the brightness adjustments on the RMR to be the best out of every MRDS I’ve used so far, followed by the Aimpoint ACRO. There is a tactile click, and the buttons are large enough to use with gloved hands.

Once users manually adjust brightness, the RMR will stay in manual mode for 16.5 hours. Afterwards the optic reverts to automatic mode. Shooters have the ability to lockout adjustments, causing the RMR to operate solely in automatic mode. With 8 brightness settings, the RMR is compatible with both night vision and blazing sunlight.

The glass features a blue tint, which is the source of great internet rage. This tint helps to improve battery life, as the dot does not have to be as bright as on completely clear lenses. The tint is a non-issue when shooting for me, but is certainly noticeable.

Eye of the Beholder

Most MRDS have some sort of minor magnification due to the curvature of the glass, but it is especially prominent in the RMR. There is a distinct 1.25-1.5x magnification which is distracting for me, especially under slower, more accuracy intense fire. My target appears to wobble as focus switches from eye to eye, moving it in and out of magnification. This doesn’t ruin the RMR for me, but is one of the more notable detractors. 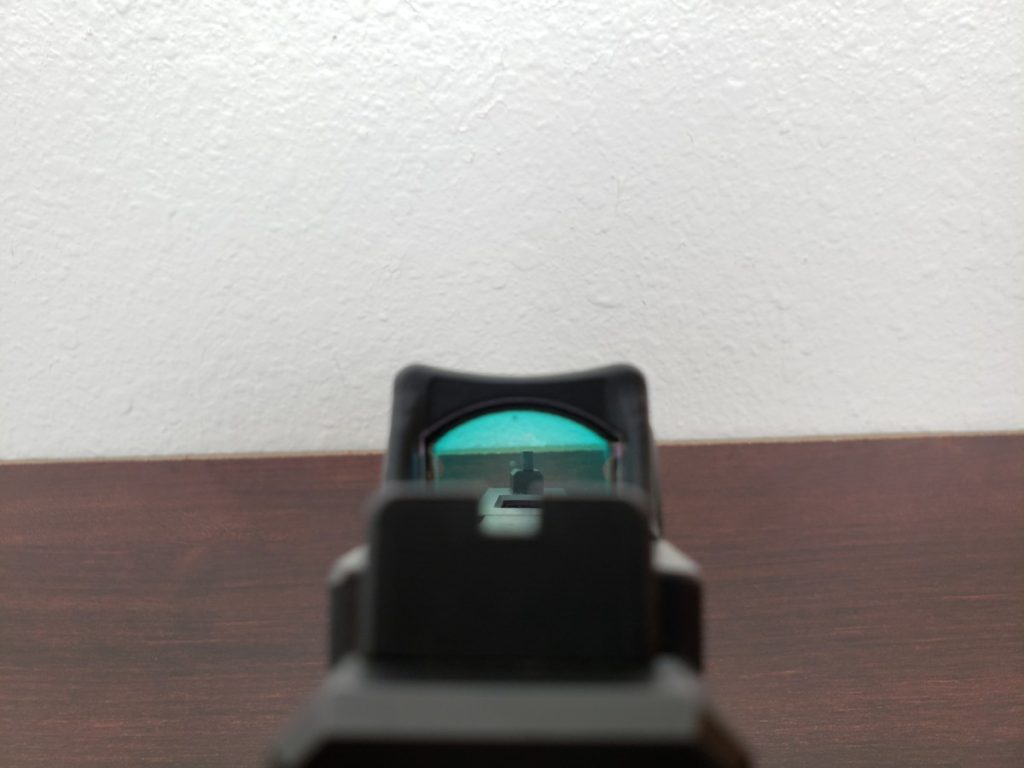 I have a bit of an astigmatism, meaning that red dot optics look a little funny to me. Some appear like a starburst, others as a comma, and some even more wild shapes. Each brand is different, and it wasn’t until I tried Trijicon that I found something that was useable (looking at you Shield). Despite the RMR looking very crisp to me compared to budget brands, it actually is one of the worst for my eyes after trying other quality MRDS. It stands well above the Leupold Delta Point Pro, but below every other optic I’ve owned. Wait for further reviews to see who takes top spot. On my average brightness settings, the reticle is roughly the size of the X ring on a B8 bullseye at 25 yards for my eyes.

The battery compartment lives underneath the RMR. This means that in order switch batteries, you must remove the optic from your gun. This could potentially result in loss of zero, and is definitely a pain in the ass. Luckily the batteries last for well over a year in most cases, so you won’t be changing them often. Best practice is either at the time change with your clocks, or annually on your birthday.

The RMR is adjustable for both windage and elevation. I have never encountered an issue with zero shift, even when removing the optic to replace the battery. When zeroing your RMR, the clicks are very indistinct, with no audible indication and just the faintest tactile indication. The RMR is not the worst in the category, but is certainly towards the bottom of the list. You really have to concentrate to tell how much you’ve moved the little turrets.

Final Thoughts on the Trijicon RMR

The Trijicon RMR is the MRDS that I trust the most. I have the most time on it, and it has the best track record from the greater firearms community. The advantages of MRDS use are unparalled, and I’m a permanent convert—as shown through my four other MRDS equipped pistols (and growing).

I would hands down recommend the RMR for conceal carry, and virtually any other use on the market. While some MRDS may be more appropriate for competition, or may be a better cost/benefit ratio for others, the RMR is a known quantity and an affordable price. I bet my life on this optic, and you should too.

Earlier today Trijicon announced their newest red dot optic, the RMRcc. Specifically designed for slimline pistols such as the Glock 48 or a 1911, the [...]

How The Bindon Aiming Concept Works With Red Dots [2022]

Glyn Bindon was the founder of Trijicon, and coined the term of the "Bindon Aiming Concept (BAC)". Glyn created the term as an application of [...]