A while back Alex C. and I reviewed the CMMG Mutant rifle for TFB. We were rather impressed with what CMMG was able to achieve that the second that we heard about the CMMG Mutant pistol I jumped at the chance to review it. When I was asked if I wanted to write up a CMMG MK47 K Mutant pistol review, I quickly told my editor "Hell yes!" CMMG will have a press release out Monday officially announcing to the rest of the world this new Mutant pistol.

When my FFL called me to tell me “this weird ar-15 pistol showed up” I had to get right over there and get it out to the range. If you take a look at Alex C.’s article about the Mutant rifle he covers a lot of the technical details rather well. Looking at the Mutant pistol you can see that, like an AR pistol, the Mutant pistol is just a shortened Mutant rifle. I am sure there is some engineering wizardry going on inside to make the pistol as reliable as the full-size rifle, but I don’t plan to get too far into those.

Let’s take a look at the specs that CMMG provided me. 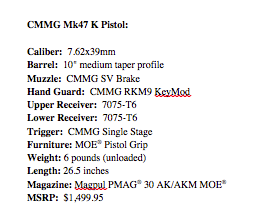 The Mutant pistol showed up with two of the Magpul AK mags and a shortened version of the keymod rail they use on the rifle wrapped around the 10″ 7.62x39mm barrel. I threw my Eotech onto the pistol because the Mutant pistol shipped to me with no sights. The trigger is a pretty standard mil-spec style unit, I honestly don’t think I would like a lighter one as long as the Mutant is in pistol form. 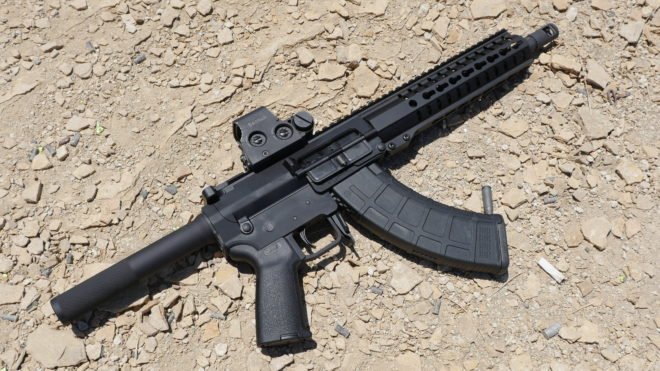 On the end of the 10″ barrel, they attached the same “SV” brake that is used on the rifle, when we tested the Mutant rifle we found the brake to be very effective. Without shouldering the pistol I can’t really comment on how effective it is, but it sure does look cool. I am sure that if you paid the ATF their money and made it into an SBR it would be just as effective as it is on the rifle. You can also see a closeup of the RKM9 Keymod rail that the pistol shares with its big brother. 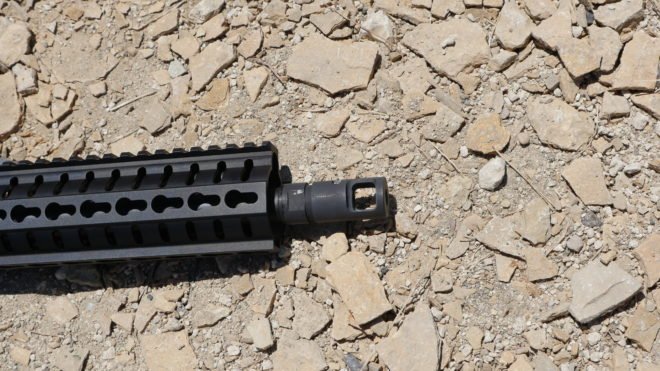 One of the few changes to the pistol is a nicely knurled pistol buffer tube. CMMG was also kind enough to include a hook type attachment plate for a single point sling. 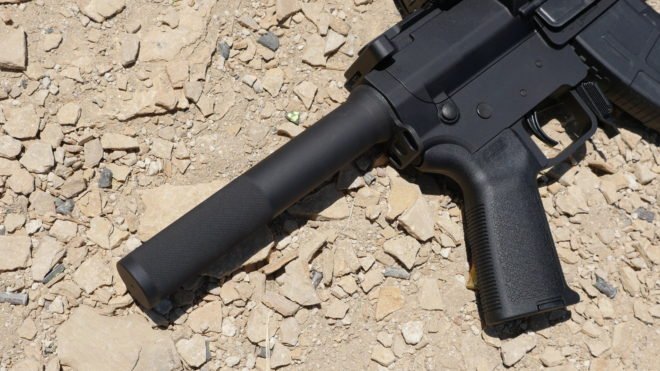 The layout of the pistol is identical to the rifle. I really liked the oversized AK type mag release. While it is a small detail I thought it was rather well thought out. 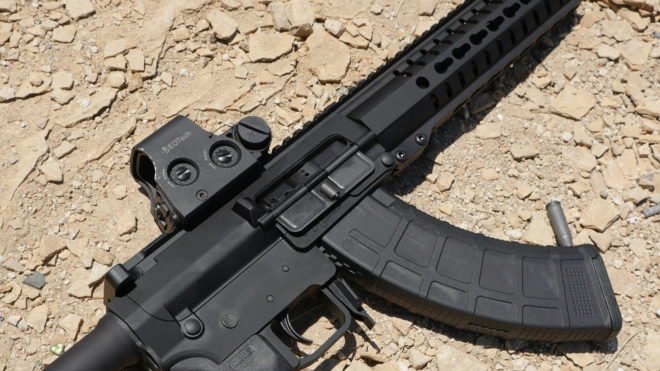 To the firing line with the new CMMG Mutant pistol! I started out with a standard pistol firing grip. You can see that the muzzle flip is pretty significant, but not out of control. 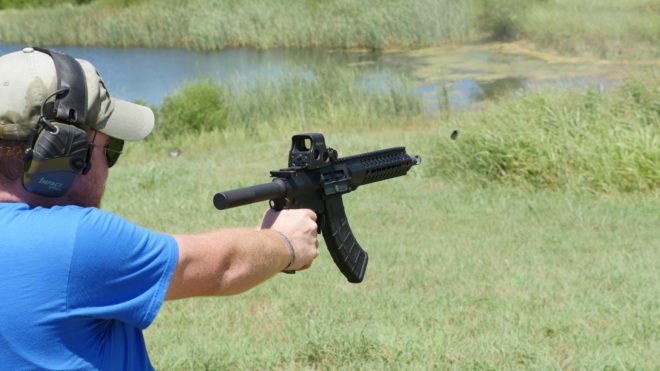 I decided shooting it like most people shoot AR pistols was in order. Disregard red dot, point shoot only! I have to admit, it was kinda fun. 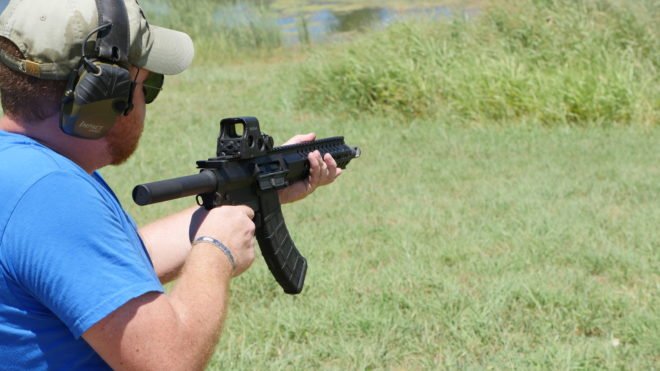 I handed the pistol off to Alex C. to see how he felt the pistol version stacked up to the rifle we previously tested. You can see that Alex decided to hold the pistol with the buffer tube against his cheek, the recoil is just a bit too stiff to fire the gun in this manner. Alex quickly changed his shooting style. 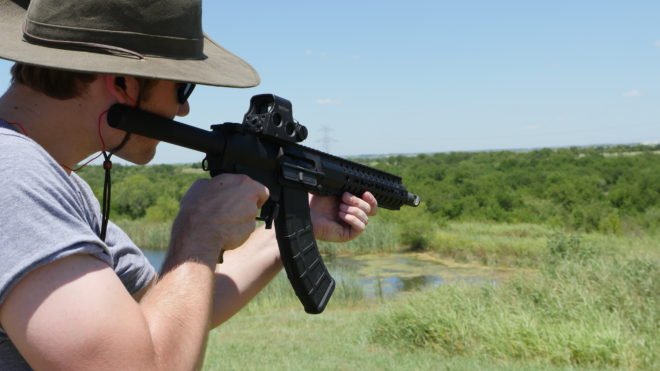 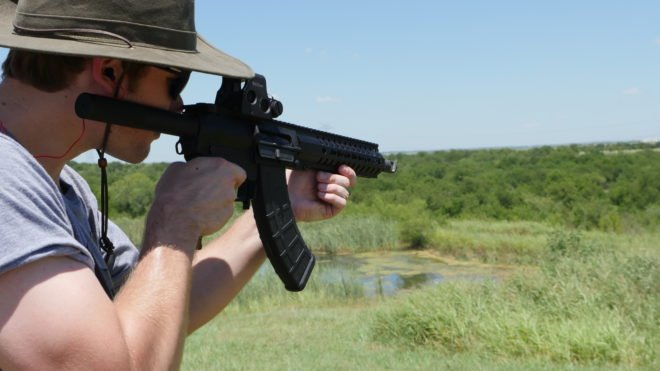 Alex decided that shooting it like he would a regular pistol was a more attractive option. Recoil still is a bit stiff, but at least you aren’t getting hit in the nose with the charging handle. 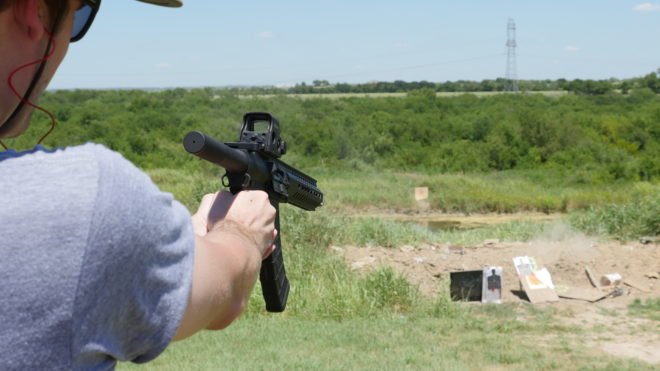 After I pried the gun out of Alex’s hands I loaded the mag back up and tried my hand at shooting the pistol with the buffer tube against my cheek. I can’t say I recommend it. 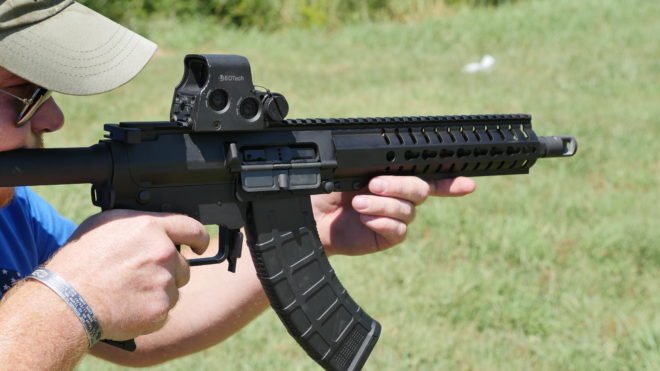 I have to admit, if the Mutant pistol had been a short barrel rifle I would be pretty pleased with it. It is a really handy package and would make an amazing truck gun or ranch type rifle. I think the Texas in me is coming out. 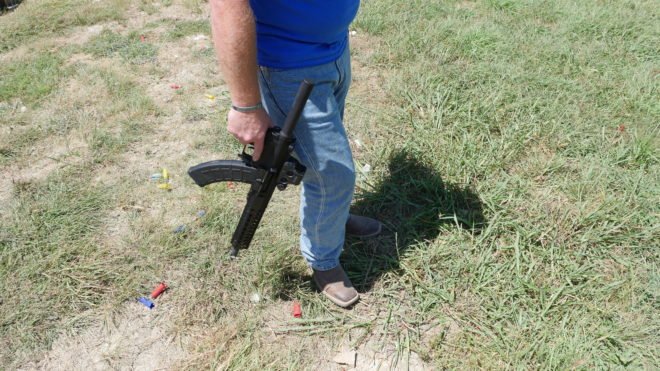 I loaded another mag up and burnt through it pretty quick. You can see that RKM9 rail that the pistol shares with the rifle. Just like the Mutant rifle we tested, we experienced no malfunctions and the pistol seemed to be pretty accurate. So far the Mutant Pistol review was shaping up to be rather positive! We had so much fun blowing through ammo we ran out before we had a chance to do a proper accuracy test but I have no doubt that it is just as accurate with a proper rest as the rifle was. 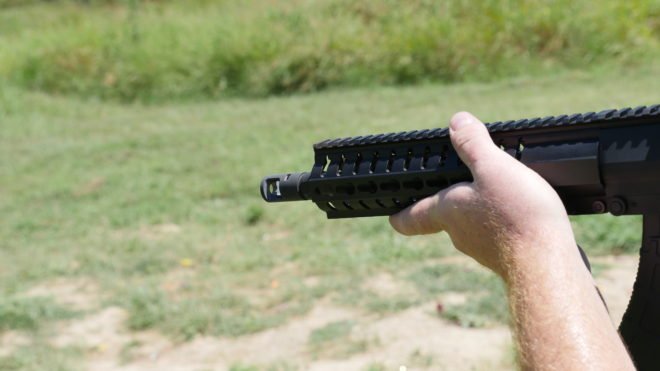 After spending an afternoon with the new CMMG Mutant pistol I really can see myself thinking hard about buying one to SBR. I am not aware of any plans as of now to offer a factory SBR, but I am sure CMMG will. Both Alex and I enjoyed both versions of the Mutant we have been able to get a chance to run through its paces at the range. I honestly can’t say enough good about the gun, it offers all the benefits of the AR series of rifles with the added benefit of ultra-cheap steel case 7.62×39.

CMMG has the pistol priced with an MSRP of $1499.95. Keep your eye out for more information on the CMMG website here.