Like many shooters, I am skeptical when it comes to lower priced, lesser known brands. Too many times have I been burned by the “just as good” crowd, that now I stick to the proven names in the industry. Over the last few years Holosun has been carving out a healthy segment of the optics market for itself. Gradually they’ve been increasing the quality of their products while keeping prices low, winning several big name converts in the process. After seeing people like Aaron Cowan, Steve Fisher, and more endorse their products, I decided to make the jump and try a 507c for myself.

The Holosun 507c is a micro red dot sight (MRDS) designed to be directly mounted on a pistol slide. Traditionally, quality MRDS meant spending around $400 or more on a Trijicon RMR or Leupold DPP. Your other options laid with (sometimes) inexpensive American and Chinesium optics of dubious quality. When the 507c hit the scene, things changed.

Holosun 507c Construction and Use

Featuring the same mounting footprint as the RMR, the 507c started off on the right foot. Two screws pass from the top of the optic through to the slide to secure itself to the gun. Much like with RMR, the 507c has a bottom mounted battery compartment. Unlike, the RMR, where the battery compartment is open, the 507c features a threaded cap. This cap can be a bit of a challenge to manipulate, but removes the need for a sealing plate to ensure a reliable connection.

While bottom mounted batteries are inconvenient for replacement, this is less of a problem here than with other optics. This is due to the solar panel located on top of the housing, which generates enough power to run the optic without batteries. Holosun claims up to 100,000 hours of battery use when combined with solar power—something I have not been able to test. As of now, my 507c has used the same battery since purchasing in June 2019. 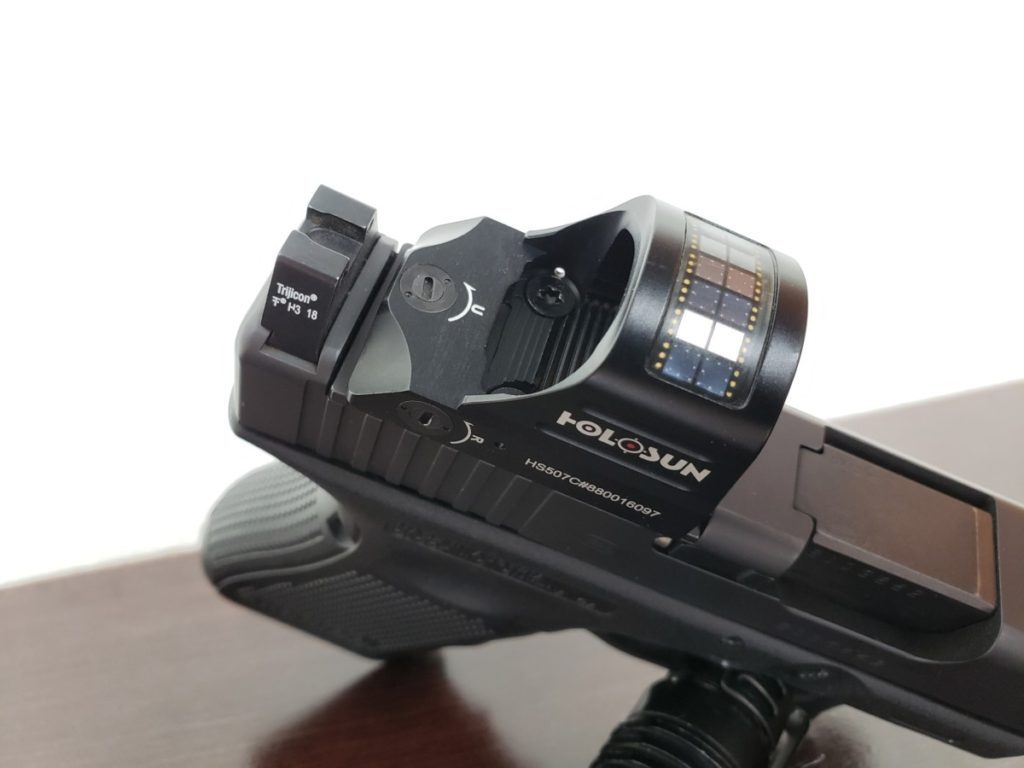 The window on the 507c is slightly larger than on the RMR, while smaller than the Aimpoint ACRO. The increased size is less noticeable than the glass clarity. There is a very minor tint to the glass, so faint that it is barely noticeable. Additionally, there is virtually no magnification to the glass that I can notice. Each of these factors are especially helpful when taking precision shots at small or distant targets.

Brightness is adjusted via buttons located on the left side of the Holosun 507c body. These buttons are very small, and sometimes difficult to press. There is a slight audible and tactile click when pressed, ensuring positive knowledge of your adjustments. Ideally these buttons would be enlarged on later generations, making them friendlier to those with large or gloved hands. When running in solar power only mode, the brightness will adjust automatically. Using this setting, the dot always appeared at an appropriate brightness in various conditions from indoors in the dark, to the illuminated range, and outside in the sun. There are 10 brightness settings on the 507c. I usually keep mine between 5 and 7 depending on lighting conditions.

Adjusting zero on the 507c is a challenge. The adjustments appear to be a simple notch for a screwdriver or case rim, but this has not been the case with my example. Holosun includes a special tool used for adjusting zero, which is the only thing I have used that is able to turn the turrets. Clicks are very slightly noticeable for both audible and tactile indications. You will not be able to accidentally over-adjust your zero. Enough force is required that I initially thought my 507c was broken, or that I would break the optic by applying so much pressure. Luckily the dot has never lost zero. 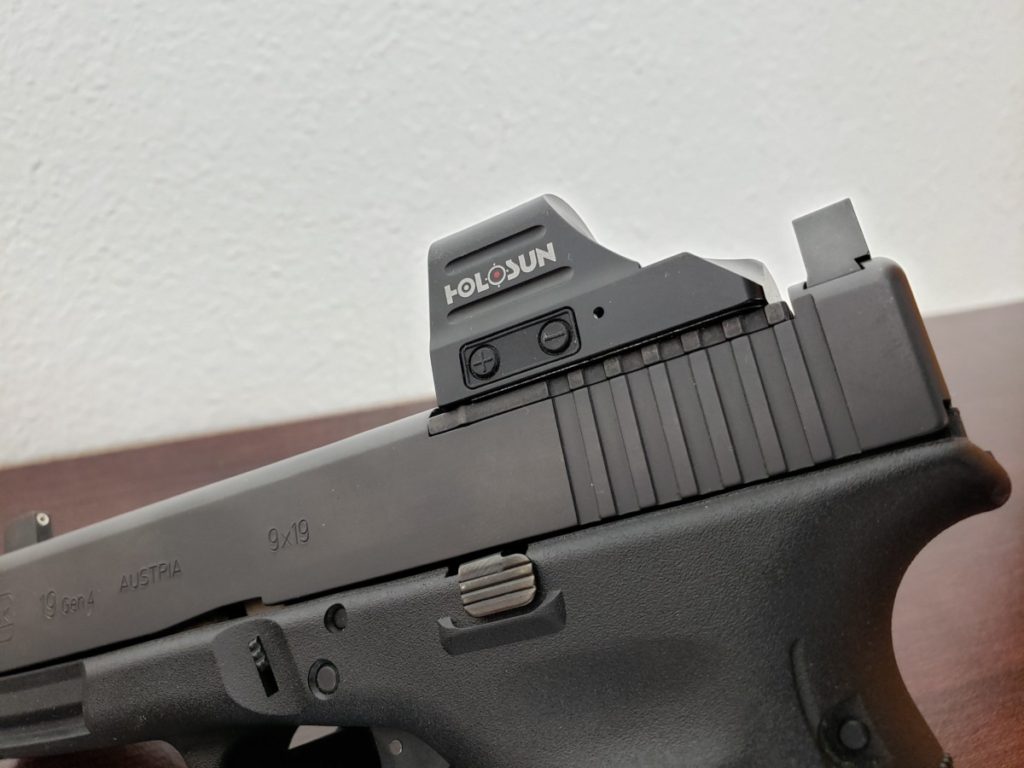 The reticle on the Holosun 507c is a 2MOA dot. This dot is the most crisp that I have seen on MRDS, rivaling even the Aimpoint ACRO. This, paired with the high quality glass makes for an excellent sight picture. These two optics are my favorite regarding glass clarity and reticle quality.

Shooters also have the option of a 32MOA circle, and a 32MOA circle with a center 2MOA dot. I hear good things about the 32MOA circle being used on shotguns for ground and aerial targets. The combination circle and dot is frequently used when training new shooters, allowing for them to potentially pick up the edges of the circle when they lose the center dot.

I primarily use the single dot to stay consistent across various MRDS. My limited time using the circle dot configuration yielded good results for speed, but slightly degraded precision at greater distances. The 32MOA circle is roughly the size of a B8 bullseye 9 ring at ten yards. This allowed me to repeatedly score in the low 90% range when shooting The Test. Situational awareness is also degraded because of the additional window space taken by the circle.

Despite the clarity of the glass, all is not well. Myself, along with several other shooters have noticed distortion in our 507c glass. None of us had seen it when using the single dot, but it was immediately apparent when using the circle or circle dot reticle. The distortion happens all along the edges of the window, causing the circle to compress in whatever direction the reticle is held (tall and narrow along sides, or short and wide along top and bottom). When compressed the dot stays centered and the reticle stays crisp with no distortion aside from the reticle compression.

This is a source of concern for me due to the potential for shifts in point of impact (POI) and point of aim (POA). I fired several magazines while holding the reticle along the edges of the window in all cardinal directions. My target was a B8 bullseye at 10 yards for familiarity's sake. I saw no difference in POA/I when comparing a centered dot versus a compressed dot.

Regarding distortion, I sought advice from those more intelligent than I. Joe Chambers has fired over 13,000 rounds out to 80 yards across a single 507c, with more than 25 different examples passing through his hand and has experienced zero issues. Steve Fisher personally owns eight 507c's, taking shots out to 200 yards with no issues as well. It seems as though my worries were for naught.

The majority of use for my Holosun 507c has been while mounted to a Gen4 Glock 19 MOS. I personally have fired around 550 rounds of Blazer Brass 124gr, and 50 rounds of both Federal HST 124gr and Speer Gold Dot 124gr +P through this configuration. Loaning the gun to a friend, he has fired over 400 rounds of mixed ammunition over the course of a few weeks. The 507c has never lost zero, nor come loose from its mount.

The Holosun 507c ships with a low profile mount for 1913 picatinny rails. Using this, I mounted my optic to my AK on an Ultimak gas tube rail. This setup was used for an advanced rifle course at Mid West Tactical. We spent 10 hours on the range, during which I fired roughly 400 rounds of Tula 7.62x39. At certain points my rifle got hot enough to be uncomfortable through gloves. I experienced no loss of zero, and no loosening of the mounts. A hasty zero the day before, with some brief fine tuning at the start of class led to easy hits all day long. The other two AK shooters, and several AR shooters were unable to make hits at the 300 yard line, but I repeatedly rang steel with no issues.

Final Thoughts on the Holosun 507c

The Holosun 507c has become my go-to recommendation for people looking to get into MRDS. It passes stress tests that are harder than anything I’d ever put my gear through. It is also the only MRDS that I have bought duplicates of. Finding the sweet spot between price and quality, the Holosun 507c is a fantastic choice for those wanting a red dot in their life. Find the Holosun 507c for sale >>HERE<<

Holosun is starting the year strong, releasing three new pistol optics for 2020. I had the opportunity to try each of them at Range Day [...]

Holosun has been killing it lately with the introduction of the HS507C last year, the HS508T earlier this year, and now they have announced the [...]

Today Holosun announced their latest red dot sight, the AEMS. The AEMS, or Advanced Enclosed Micro Sight is their newest addition to the micro rifle [...]