Author's Note: The VRPA40, spare magazines, and 100 rounds of Fiocchi High Velocity birdshot was provided by Armscor for the purposes of review. I purchased this shotgun after the review at a discounted price for further testing and personal use.

Ever since Remington and Mossberg came out with detachable box magazine shotguns, the 870DM and 590M respectively, I’ve been intrigued. How do they perform compared to a standard tube fed gun? My assumption was clunky and unreliable, yet they sell like hotcakes. After months of temptation, Rock Island Armory contacted me about their take on the concept and I jumped at the opportunity.

The VRPA40 is Rock Island Armory’s first pump action gun in the respected VR line. While the gun features a 12 gauge, 3” chamber, magazines will only fit 2-3/4” shells or shorter. The magazine tube is simply there for the pump to ride on, and is non-functional as a magazine.

The VRPA40 comes with multiple chokes, and I used the cylinder bore option for the entirety of the review. Screw in chokes are easy to use while staying securely in place during firing.

The VRPA40 is equipped with a ghost ring rear sight and red fiber optic front sight. The sights were nearly perfectly zeroed for 25 yards upon arrival, with just a click or two needed to get center mass slug hits on an IDPA A-Zone. The sight picture allows for precision shots at distance, without hindering speed up close. The red fiber is bright, and makes for quick target acquisition.

The AR-15 style magazine release is a little stiff, and must be pushed in fairly deep, but functions well and requires less force to activate over time. The action release lever is a little difficult to reach with a firing grip, but is simple to use and was never accidentally activated. I thought I’d hate the action release at first, but I’ve come to like it over time. The safety is a standard crossbolt, nothing notable.

Magazines do not drop free, but are not difficult to remove. Insertion is positive, and the magazine well is slightly flared to aid in loading. The 5 and 9 round magazines handle very well and are easy to load to capacity. The stendo 19 round magazine gets unwieldy, especially once the gun starts rocking side to side—almost like a perpetual motion machine. That being said, nothing gets attention on the range like mag dumping 19 rounds of 00 Buck or 1oz slugs.

An issue plaguing some box magazine shotguns is shell compression. Essentially the pressure of the magazine spring deforms the plastic hull, preventing the rounds from being chambered. To test for this I kept rounds loaded in a 5 round magazine for a month to see if shell compression would affect reliability. The top round is visibly oblong afterwards, but did not cause any issues with feeding or firing.

Working the action feels strange. There is no "clack-clack" like on my other pump action guns. I believe the lack of a shell lifter has something to do with this, as you can feel and hear a difference. Less mechanical actions happening behind the scenes, just a bolt moving within a tube. It’s nothing distracting or bad, just unusual.

Throughout the review process I fired 440 rounds through the gun.

The metal heat shield works excellently. I fired 38 rounds as fast as I could and the heat shield was only warm to the touch, while the barrel itself was burning hot. The recoil pad is soft and does a fantastic job absorbing the abuse of slugs.

The most prominent malfunction I witnessed was a double feed as a result of shooters bobbling the pump. The feed lips on the VRPA40 magazine essentially hold only the brass on the shotgun shell, which allows for shells to be fed from the magazine with very slight forward movement of the action. On multiple occasions shooters will start to close the action, then draw it back slightly, and pump forward again. This causes two shells to be ejected from the magazine into the receiver. Luckily this is easy to clear, simply removing the magazine allows the shells to fall free. Running the action very aggressively and concisely clears up this issue.

Curious how port loading works with this style of gun, I port loaded 25 rounds with an empty magazine in the gun. Each round fed and ejected without fanfare, removing any concern I previously held.

Rock Island Armory explicitly states that the VRPA40 is for use with only 2-3/4 shotgun shells, despite having a 3" chamber. This is due to the dimensions of the magazine, only being long enough to fit a standard shell. But what about shorter shells? In short, I don't recommend them. The Mini Shells will frequently nosedive into the magazine body during feeding, resulting in a stoppage.

About half of the mini shells got stuck on the extractor during ejection. This is usually remedied by running the action forward, causing the next shell to kick the spent hull out of the gun. This stoppage only happened once with full size shells, specifically with S&B 00 Buck. Shooters will need to be extra vigilant when working the pump to keep stoppages to a minimum. I was able to go through 10 Mini Shells with no issue after figuring out why the malfunctions were happening. 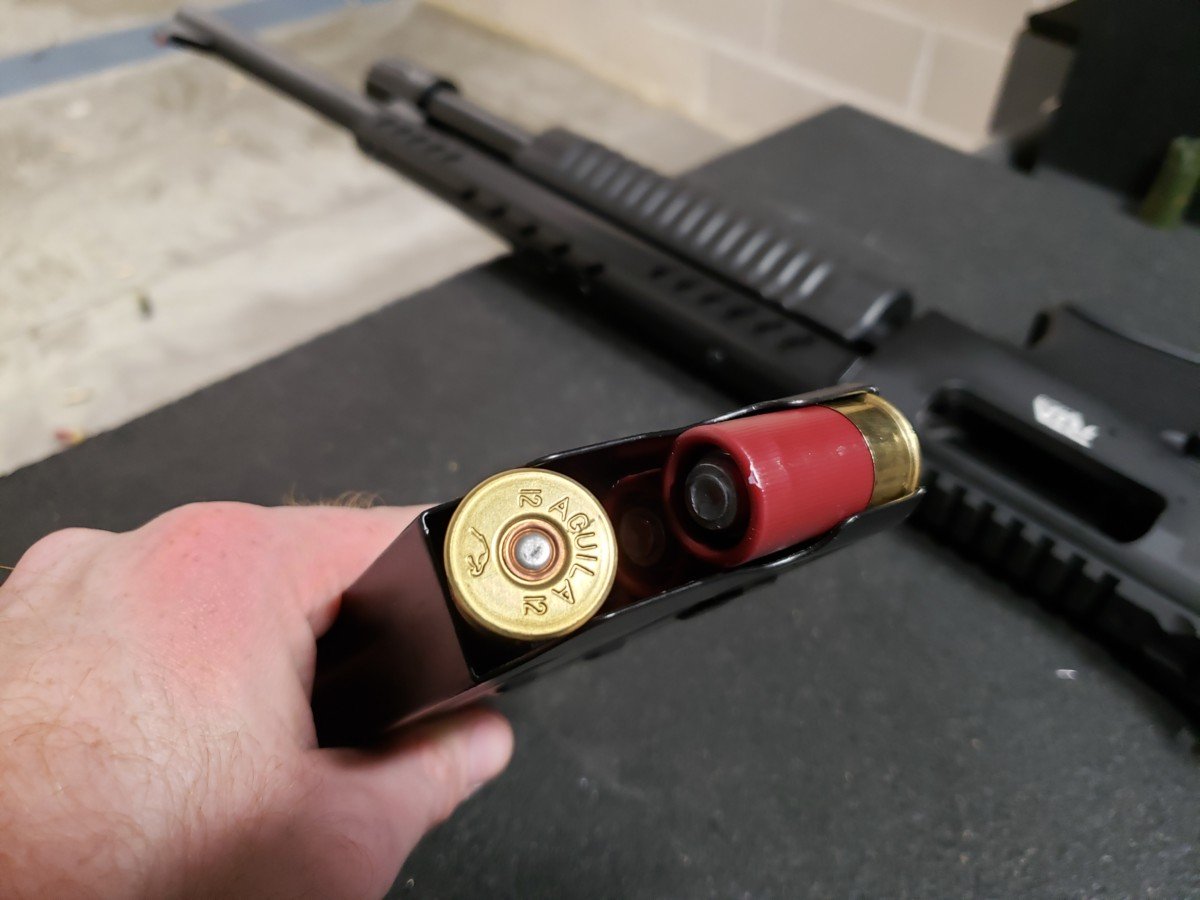 Overall I am very pleased with the Rock Island Armory VRPA40. It is proving to be reliable, if sensitive, soft shooting, and is a big attention grabber. Throughout the review process I put the gun in the hands of no fewer than a dozen shooters and everyone walked away with smiles on their faces. While the VRPA40 is not replacing my Maverick 88 or Benelli M2 for go-to defensive shotguns, I am comfortable defending my home with it. For competition use, it’s a solid option.

The Rock Island Armory VRPA40 will have an MSRP of $399 and is hitting shelves in January 2020. Keep watching for updates in the coming months!

Like Loading...
About Daniel Reedy 281 Articles
Daniel holds instructor certifications from Rangemaster, Agile Training & Consulting, and the NRA. He has received training from Craig Douglas, Tom Givens, and Steve Fisher among others. He also has experience competing in USPSA, CAS, 3 Gun, and Steel Challenge. In his free time Daniel enjoys petting puppies and reading the Constitution. His work is also published by AmmoLand, Recoil Concealment, and Air Force Times. Daniel has also written and edited for The Kommando Blog.

The Rock Island Armory VR80 is a magazine fed 12 gauge semiautomatic shotgun with ergonomics and controls similar to the AR-15. The standard thumbhole stock [...]