BLUF: The CZ Scorpion Evo pistol has a host of issues, most being ergonomic. The gun is far from perfect but maintains its position as a superior performer among the competition.

CZ was on the verge of greatness with the Scorpion Evo, they were this close, yet Scorpion is one of the bigger disappointments that I've had regarding firearms. Or at least it started that way.

The included iron sights are excellent in form and function, with easy adjustments for both elevation and windage. They are attached with a similar method to the handstop, so I am not completely confident in their durability, but so far they have not let me down. Accuracy is fair at "home defense" distances of 5-10 yards; better than what I can achieve with my Glock but not as good the Ruger PCC9, which I attribute to the shorter sight radius of the Scorpion. You'll be able to make the hostage saving headshot, but you won't be winning any medals. 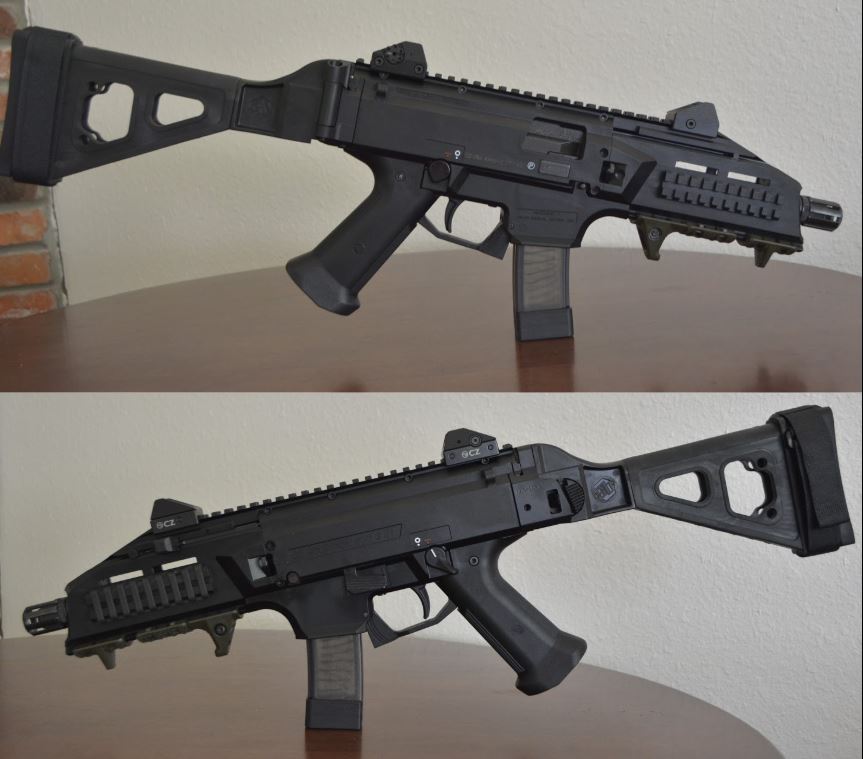 The SB Tactical folding brace for the Scorpion has a decent length of pull for me (I'm 6'1"), allowing for a much more stable shooting position than possible without. The brace does not lock in its folded position, causing it to flop around when moved. The Scorpion can be fired when the brace is folded, however, the ejection port will be blocked.

The Scorpion is fairly lefty-friendly. Safety and magazine release levers are ambidextrous, and the non-reciprocating charging handle is reversible; now even southpaws can get their "HK slap" on. Ejection is right side only, though I had no issues when firing several magazines from my opposite shoulder. The bolt release lever is oversized and only found on the left side, making it the one non-ambi control on the gun.

Sling attachment points are versatile, essentially being open holes in the sides of the gun, but are so small that most slings will need some sort of adapter. HK hooks are too large, and QD mounts are impossible without aftermarket accessories. I found the MASH hooks on my Elite Survival Systems "Shift" sling worked well, but still required a little effort to fit properly, marring the polymer on both attachment points. These points can be either a boon or a bane depending on user preference.

The safety lever is stiff, and jabs into my trigger finger when in the “fire” position. My two options were to modify the factory lever or to buy a replacement piece. I opted for the latter and spent $4 on a plug for the right-side lever. Putting the gun back on "safe" is even more of a challenge, forcing me to completely break my grip to get leverage on the safety.

The trigger is unreasonably heavy, with tons of stacking and creep. It feels almost like an airsoft trigger, but with the pull weight of a DA handgun and none of the smoothness.

The bottom edge of the trigger is sharp like CZ forgot to finish deburring that portion because they didn’t expect anyone to feel it. Luckily these issues are hard to notice under rapid fire but are glaringly obvious when shooting for accuracy. I expect better from a gun in this price range.

Initially, the charging handle was insanely difficult to retract, so much that I briefly thought my Scorpion was broken. This was slightly less of an issue when the gun was off “safe”, but still challenging. After about a hundred reps cycling the action manually the charging handle loosened up into the realm of what I would expect to see from the factory--not as easy as my CETME, but not a challenge either. 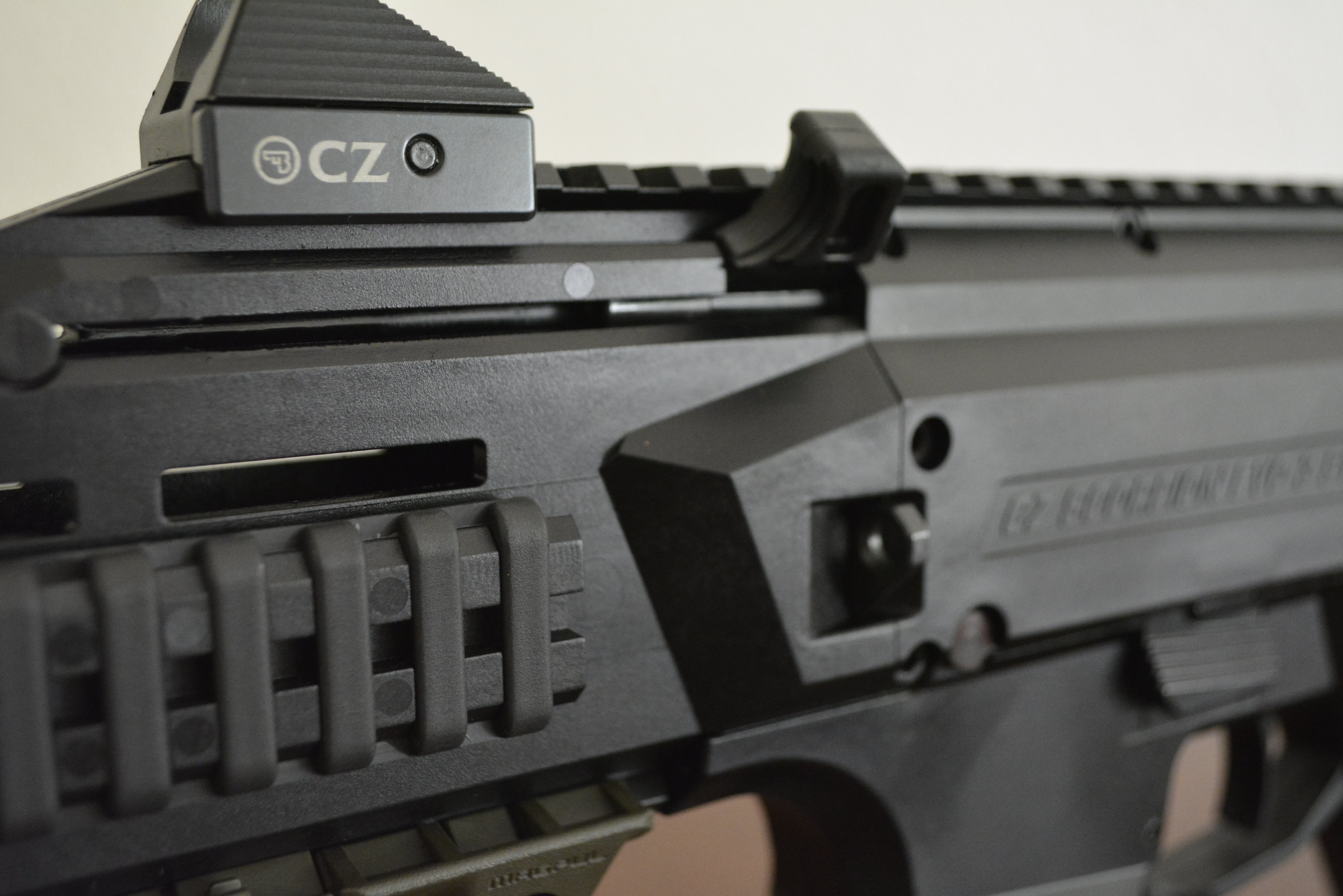 To add injury to insult, there is a small "shelf" in part of the molding that is at the perfect angle to crack my knuckle when drawing back the bolt. This isn't a huge issue, as changing the position of my hand avoids the problem, but the "shelf" shows a lack of forethought with the design.

My two 30 round mags do not drop free and require effort when ripping them from the magwell. Visual inspection reveals no defects compared to the 20 round magazines. After a few hundred rounds the 20 round magazines stopped dropping free, despite them previously ejecting with authority. Almost immediately 30 rounders began dropping the bolt when removed from the gun; this does not occur with 20's.

There is a screw at the top of the trigger guard, used to hold the trigger pack in place.  During shooting, this screw repeatedly fell out, though function was not affected. Some blue Loctite fixed the problem. Luckily I was shooting indoors and could see the screw on the floor, otherwise I may have lost a critical piece of hardware.

The included hand stop suffers from poor construction. Mine arrived with a portion flaring out from uneven pressure against the rail due to the single screw used to secure the piece. A second screw on the forward portion might remedy this. I replaced mine with a Magpul XTM hand stop kit.

The Scorpion has some problems, many are fixable, and none are show-stoppers. The gun is compact, reliable, low recoil, and has a fantastic aftermarket. It may not be the greatest range gun, but it runs and runs and runs. Despite all of its shortcomings, the CZ Scorpion Evo 3 S1 is the way to go if you want a large-format pistol in 9mm for under $1,000. 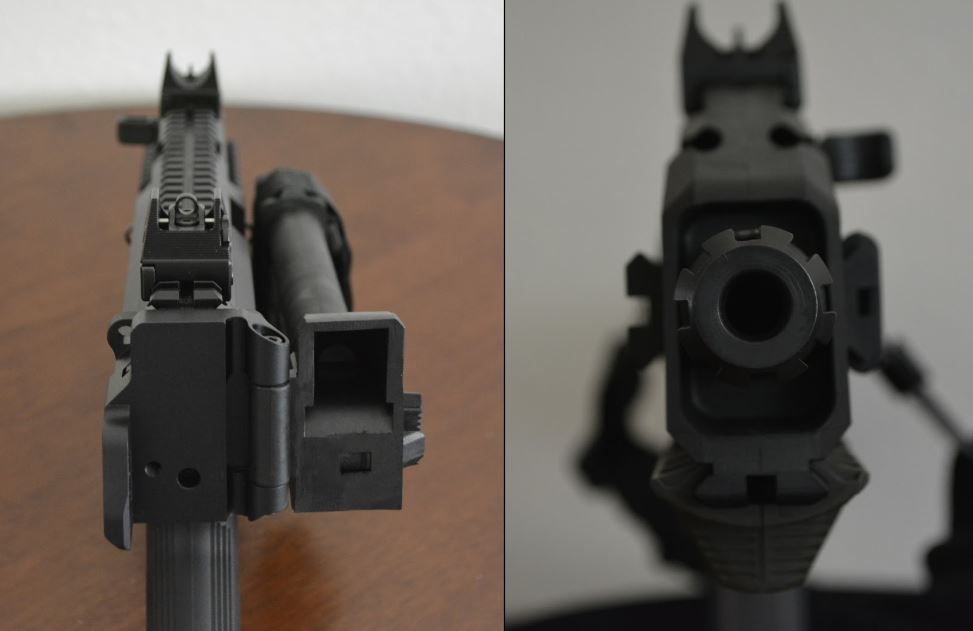