I will be the first to admit that before I started this article, I wasn’t too well versed in aftermarket chassis systems and the benefit of them. I spent a bunch of time reading and learning about the different options out there, what features matter to me and which ones didn’t. Once the AB Arms Mod*X Modular Rifle System showed up at my door, I felt a bit more prepared to put it through its paces.

Let's take a look at the specs of the AB Arms Mod*X chassis.

Another hurdle I had was that the only Remington 700 I had at my disposal was a long action in 300 Win Mag. Thankfully my friend Ed with Midway Firearm Refinishing had one of the AAC versions of the Remington 700 in a Hogue stock. Ed was happy to give me a hand reviewing the Mod*X, he has been looking into purchasing a chassis system and was seriously considering the Mod*X. It took a bit of time to find a dry day here in North Texas with the biblical amount of rain we have been receiving, I want to thank Adam and Jason at AB Arms for being patient with both me and the weather.

I gave Ed a call once we had a day that we wouldn’t have to swim to the firing line (my range had just flooded and the road was washed out badly) and headed over to his Cerakote shop. Once I got there Ed had already taken the rifle out of the Hogue stock and was eagerly awaiting the Mod*X. Here you can see all the components that AB Arms sends you. The stock trigger guard and magazine will not be used when the chassis is installed. Ed also planned on running the rifle suppressed so I left that on the table. 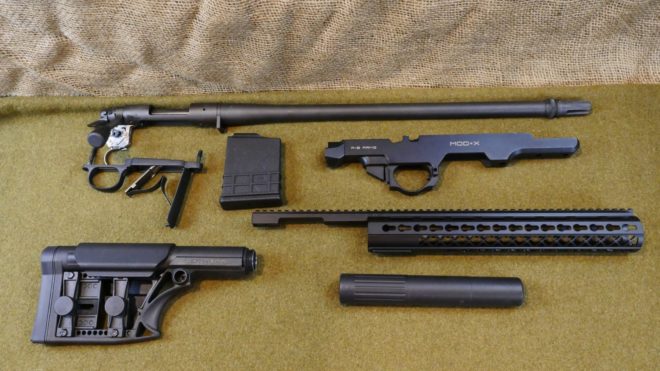 Taking a closer look at the chassis you can see that it is nicely machined. The magazine release just inside the trigger guard making it easy to reach. AB Arms has informed me that on the next generation of the Mod*X chassis they have flared the mag well to ease magazine changes. 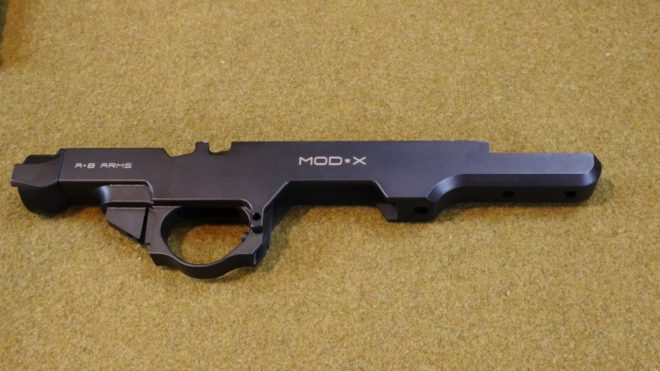 One of the issues Ed and I ran into was a standard Wheeler Fat Wrench was not able to reach down into the hole just behind the trigger guard to properly torque the rear hex head bolt that attaches the action to the chassis. 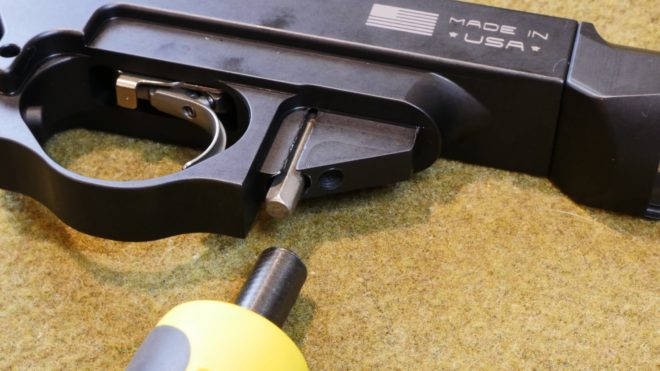 AB Arms also includes a Luth-AR MBA stock with the Mod*X, I found it to be rather light and very adjustable. AB Arms has informed me that they will be releasing a folding stock for their chassis that will be lighter than the Luth-AR stock currently included. I am really looking forward to what they have come up with, providing a stock with as much adaptability as the Luth-AR stock while making it a folder AND lighter is quite a feat. 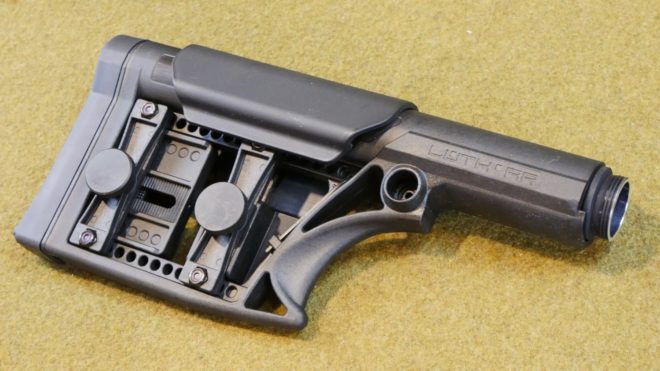 The last of the main components that make up the Mod*X chassis is the handguard. Again it is very nicely machined, I don’t know if the little diamonds on the top of the rail were intentional or just a nice byproduct of the machining. Either way, it was a nice touch. The 13.5″ handguard includes a Mil-Spec m1913 rail to mount your optic to as well as Keymod slots on three sides of the rail. I wish they offered an m1913 railed version, I understand why they didn’t though. Had they put m1913 on the sides that have the Keymod slots it would be noticeably heavier. 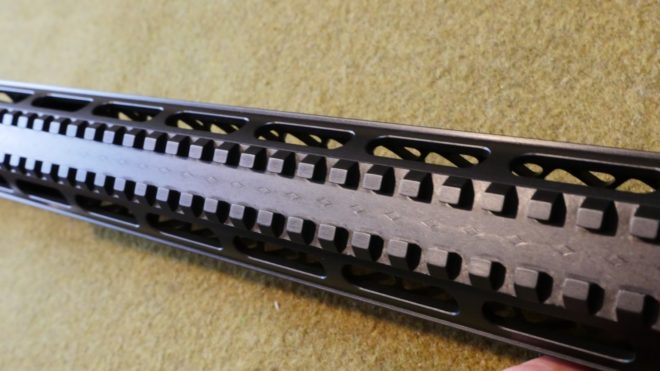 We had both hands full when putting the rifle into the chassis so no photos of that. AB Arms includes an easy to follow and comprehensive installation guide. We had no issues getting the rifle together and ready for the range. We did foolishly forget to function check the rifle … Whoops. I guess we are only human after all. The rifle is pretty handsome after we got everything situated. 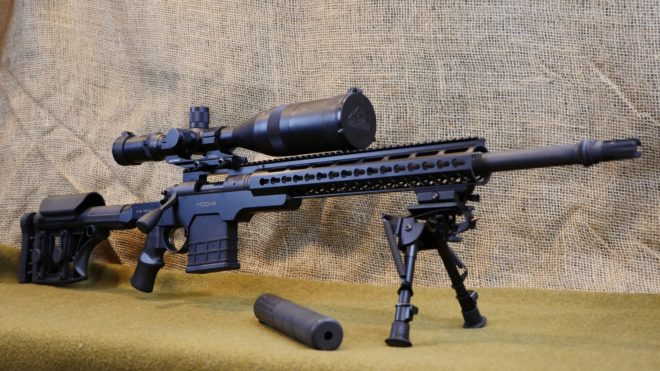 All buttoned up, it is off to the range! 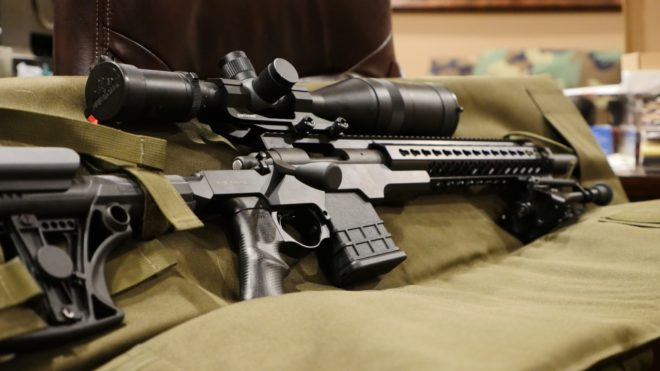 I skipped the photos at the range and elected to shoot a video review while there since Ed didn’t feel comfortable using my camera. He later admitted to me that his wife was the photographer in the family. Your secret is safe with me Ed.

Anyhow, here is our video review on the Mod*X chassis. I will go into detail a bit later about our grievance with the pistol grip. The Magazines being tight when fully loaded isn’t uncommon for polymer mags.

So I said we had a bit of a grievance with the pistol grip, the one included with the Mod*X was far too slender in our opinion. Once we got back to Ed’s shop he promptly replaced it with an Ergo grip. As soon as Ed wrapped his hands around the grip and found it to be a perfect fit he looked at me and said that he didn’t want to take the rifle out of the chassis. I called AB Arms on the spot and told them that it was so enjoyable to shoot that I would be sending a check back instead of the Mod*X. 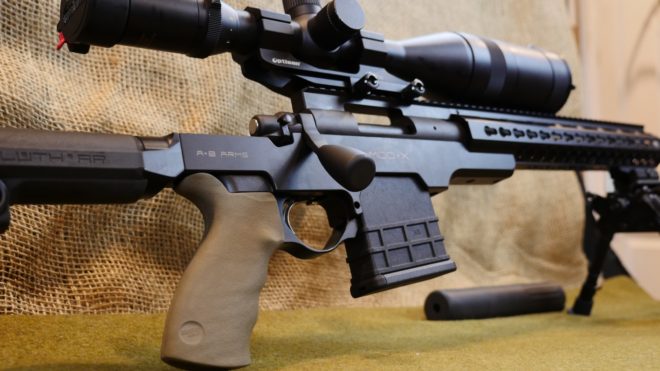 I also mentioned that the magazines are a bit on the stiff side when fully loaded. The mags swell when they are loaded to capacity like many other polymer mags on the market. The TorkMag-50 I just reviewed suffered from the same problem. 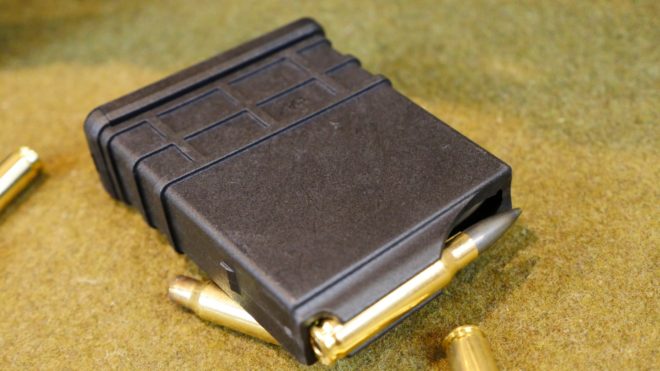 Something that really took me by surprise was how light the rifle was in its new chassis. With the Mod*Xweighing in at only 3 pounds 10 ounces the rifle including suppressor, optic, and mount weighed in at right around 14 pounds. Not half bad considering I have tested AR-15 rifles that weigh just as much if not more. 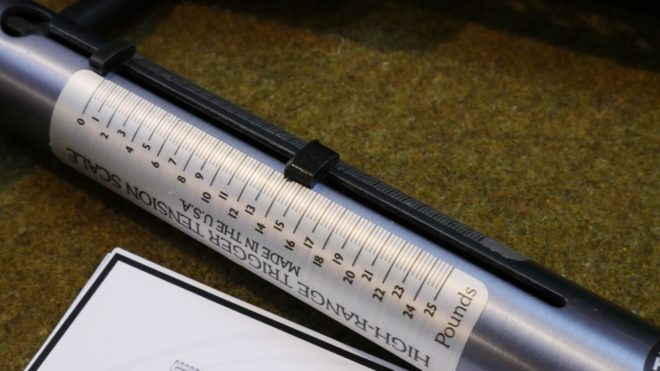 Here you can see the area of the chassis that the rear tang nestles in. AB Arms took a no fluff approach to the Mod*X focusing on ergonomics, weight savings, customizability, and strength. We did have a small issue with the safety pocket in the chassis not clearing the safety on the factory trigger pack, thankfully that was easily fixed on the range with a field expedient mill (screwdriver) removing a couple thousandths of material on the leading edge of the safety pocket. I chalked this up to Ed’s rifle and not the Mod*X. When I called AB Arms about this Jason said that they had opened the trigger and safety well up to allow shooters to use all aftermarket triggers such as the Timney triggers and other similar styles of triggers on the current production pieces making this a non-issue in the future. The chassis I was sent was the first of the production units, the ones rolling off the assembly line currently have the new trigger well. 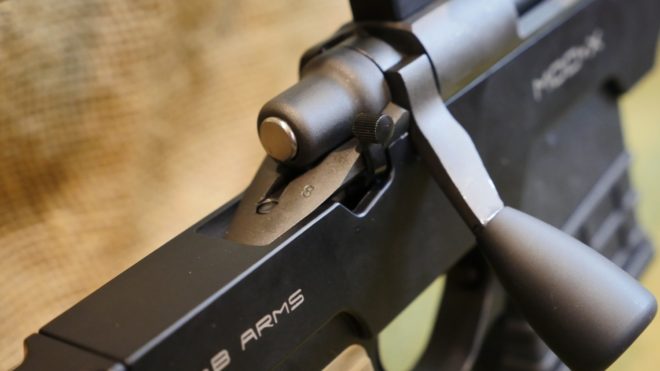 After spending some time at the range with the Mod*X chassis from AB Arms I am nothing short of impressed, so impressed that I will be placing an order for one of the second generation units later this month. The chassis was sent with comprehensive installation instructions and everything you needed for install (minus a torque wrench and bit). The chassis provided a rock solid platform for Ed’s Remington 700. The adjustability in the chassis allows us to set the rifle up exactly how we wanted it. Even though we had a couple small issues with getting the rifle ready to fire, the customer service that I received said a lot about Jason and the team at AB Arms. I have no doubt in my mind that they would do everything they could to make sure a customer was satisfied with their purchase.

As I was writing this review I received a call from Adam at AB Arms letting me know that they will have something very special being released in the next week or so. I can’t say anything yet, but keep an eye out for a press release from AB Arms.

The AB Arms Mod*X chassis has an MSRP of $799 for the black version and $899 for the Cerakote version. You can learn more about the Mod*X chassis at the AB Arms website. I definitely recommend checking them out if you are looking for a stock or chassis system for your Remington 700, not only will you get a very solid rifle chassis system out of the deal, but you will be supporting a veteran-owned business and some really great folks.

This post originally was run on The Firearm Blog - http://www.thefirearmblog.com/blog/2015/07/14/tfbtv-ab-arms-modx-modular-rifle-system-remington-700/