Sometimes You Get What You Pay For

The Ohio based Aim Surplus has been selling firearms, ammo, and accessories for years, and recently, have released their own line of parts for the AR-15. I picked up two sets of their ambidextrous safeties, one set last year, and one earlier this year. The price is low, but does the quality match that, or exceed my expectations?

Installation of the AIM Safety was pretty smooth. The two halves of the safety screw into the "axle". Installation took about 10 minutes, half of which is time spent removing, and putting the pistol grip back on. I've removed the safeties from both of my guns a few times, while swapping triggers, and have not run into issues with stripped screws, or damage to the axle. Blue Loctite was applied to the screw threads during each installation.

Fit and finish is such a ubiquitous phrase, and it means different things depending on who you ask. The finish on the selectors has not worn off, despite lots of use, and they shipped with no rough, poorly machined sharp edges. Sometimes with cheaper accessories, chattering, (loose or dull cutting tool creating warped sections), can be an issue, however, my examples are machined properly. The fit into the lower is tight, but not in a bad way. The selector feels much more positive and tactile than a standard selector, which is a big plus in my book.

The selector can be configured with either a 45-degree throw or a 90-degree throw. I've run with the 90 over the testing period, as it's what I've grown accustomed to. Texturing for the selectors is on point, as it is sharp enough to not slip off of, but won't tear up your thumbs. I've not run into issues of the safety catching on gear, which is another plus in my book. 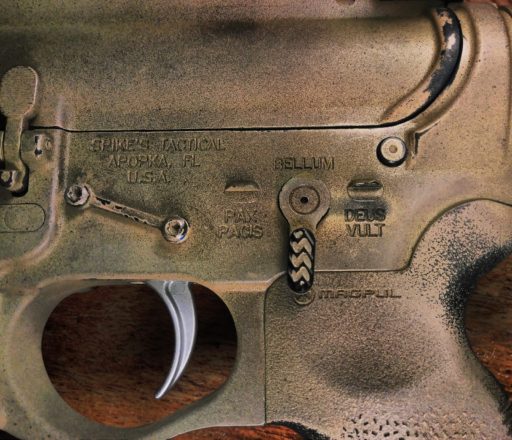 A Year of Manipulations

There's a myriad of theories to safety manipulation on the AR platform, and I follow a specific one. For me, the gun is always on safe, except when it is touching my cheek. If the gun is at low ready, the safety is on. If I'm doing a reload, the safety is on. Whenever I bring the gun to my cheek, the safety comes off. I'm sure that you've gotten the point by now. With my technique, I manipulate the safety a lot. I'm not so anal as to have somehow cataloged how many times, but the safeties on both of my ARs have been manipulated thousands of times, both in dry and live fire settings.

During the testing period, I did not run into any issues with the safety. The safeties have always been positive, moving between selector positions. They have not come loose or sheared any components off. There's not much more to say, these selectors just work. If you're looking for a budget ambidextrous safety for your build, I wouldn't hesitate to give the Aim Surplus selector a try.

The Aim Surplus Ambi Safety Selectors were purchased at the cost of the author.