When I first saw the Beretta ARX-100 in 2014 in a Bossier City, Louisiana gun shop I thought it was one of the most repulsive guns I'd ever seen. A pencil barrel, an overabundance of polymer, no OPERATOR heritage, and a $1,800 price tag turned the ARX into a joke in my mind. Four years later, I came across the ARX-100 once more, this time for less than $800 brand new. Suddenly my disgust turned to intrigue, and I made my way home with a new rifle.

The Beretta ARX-100 is the semiauto version of the select-fire ARX-160 which has been in service with the Italian military since 2008. It is fed from standard AR-15 magazines and is chambered in 5.56 NATO. Unlike the AR-15, the ARX-100 uses a short-stroke piston operating system.

One of the first features you'll notice is the pencil profile barrel. All of my shooting with the ARX-100 was offhand standing, so while I cannot comment on its accuracy potential but I will say that I had similar groupings to what I usually shoot with my Colt and Daniel Defense ARs. The barrel is capped off with an A2 birdcage flash hider and is an average 16 inches in length.

The ARX-100 features a quick-change barrel system, somewhat reminiscent of the takedown of a Glock. Lock the bolt to the rear, press down a tab on each side of the receiver, then the barrel and piston pull right out. This makes cleaning simple, but otherwise is mostly a gimmick for civilians.

The only options available are spare factory barrels and 10" SBR barrels in 5.56x45 that cost just as much as parts kits or a factory ARX-100 short barrel rifle. With any luck, we'll see caliber conversions ten years down the road, like with the ACR, but I won't hold my breath.

A monolithic rail stretches across the top of the ARX-100, indexed by front and rear flip-up iron sights. These are proprietary to the gun and come mounted from the factory. They are adjustable for windage and elevation, with the rear sight featuring a drum for rapid range adjustments. Mine were zeroed well enough from the factory for most action shooting competitions or training events. These sights are unusually tall, requiring nearly a chin-weld to keep a good sight picture when firing.

The greatest travesty of the ARX-100 is the sling mounts. What the hell was Beretta thinking when they designed these? Possibly literally the worst sling mounting hardware I've ever seen on a combat rifle. With mounts on the stock, two on each side of the receiver (fore and aft), and one on the gas block you'd think Beretta hit the jackpot with mounting options. Unfortunately, the mounts are so low on the gun that most slings will not fit, to include the Blue Force Gear Vickers, Magpul slings, and the Elite Survival Systems Shift. 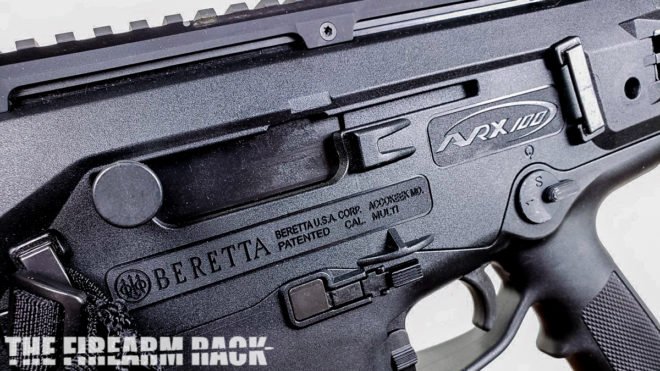 Fortunately, Beretta provides a proprietary sling with the ARX-100, which is very similar in design to the Vickers and others. While easily adjustable, and plenty long for even the girthiest shooters, the material is very thin and somewhat harsh. Wearing the rifle throughout an 8-hour training event, my neck and shoulder were feeling the burn, despite having no direct contact between my skin and the sling. It's serviceable, but not ideal.

Ergonomics Of The Beretta ARX-100

There are three small sections of picatinny rail on the forend of the ARX-100; one at 3, 6, and 9 o'clock. The side rails are made of steel, and stick out significantly from the gun. The bottom rail looks as though it is being covered by a piece of polymer, but make no mistake, that is all the shooter is given. Underneath that handguard is a proprietary mount for the Beretta GLX160 A1 grenade launcher designed to be used with the ARX-100 and its select-fire sibling, the ARX-160. Those willing to shell out roughly $30 can purchase a polymer rail segment to replace the ribbed handguard. A worthy investment in my mind. 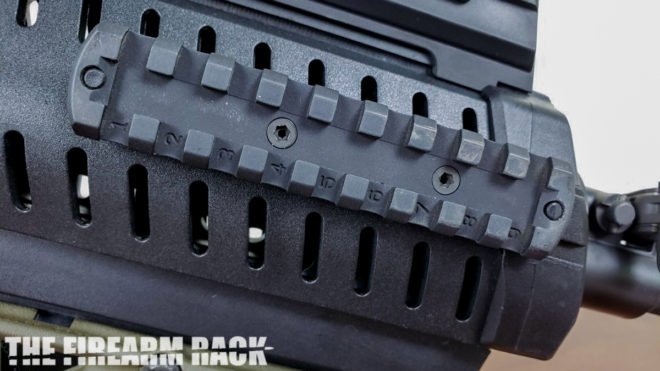 Relative lack of rail space and short handguards prevent modern gear/hand placement. I added a Magpul AFG-2, which puts your hand very low on the gun. Purchase is improved slightly but doesn't come close to the control offered by an AR-15.

The stock on the Beretta ARX-100 is both folding and telescoping, offering three length of pull adjustments. When locked open, the stock is extremely solid, having nearly zero wiggle laterally or vertically. There is a slight amount of play with the LOP adjustments, unfortunately. The stock springs in and out, sproinging slightly while doing so, though not nearly to the degree of an AR-15 buffer tube. This is not something I notice during training, but definitely when slow firing.

The pistol grip is integral to the ARX-100 and cannot be changed. It is similar to an A2 style grip, but not as triangular, a slight improvement. I prefer a BCM Gunfighter or Magpul MOE grip, but this is not a showstopper.

I mounted every accessory I could find, which was two. An underslung 1913 rail, and an enlarged charging handle.

The trigger is polymer and extremely thick, resembling a CETME trigger. When pulling slowly, there is a false break, almost like a two-stage trigger, that also resets when releasing. During my first range trip I was able to reliably hit this first pseudo-stage before breaking the shot, making for great consistency. Subsequent range trips were not as successful, with my pulling the trigger straight through rather than prepping it. It is almost as though parts were wearing in, slowly removing the false break. There is a little takeup, but overall the ARX-100 has a decent military trigger, similar to an AR-15.

If you've seen the manual safety on an AR-15 then you've seen the safety on the Beretta ARX-100. Ambidextrous levers with a 90-degree throw, and distinct snicking between fire and safety. Nothing to write home about, good or bad.

The Beretta ARX-100 suffers from a series of ergonomic shortfalls, many of which would be unacceptable on a rifle in a higher price range. Now that the sale price has dropped to below $1,000 at some retailers I am willing to look past these issues, as most are minor inconveniences at worst.

Left Handed Love For The ARX-100

Be cautious when running the charging handle. Depending on the angle on your hand, it is possible to smash fingertips on the brass deflector. Don't ask me how I know.

The ARX-100 is an excellent choice for southpaws, as nearly everything is reversible. Pressing a bullet tip into a hole resembling a QD socket at the rear of the rifle swaps the ejection pattern. The charging handle can be moved to either side without tools. The bolt lock and release are ambidextrous, as is the safety and magazine release.

The magazine release is in a familiar place for AR-15 fans, although the button on the ARX-100 is a little small and stiff when compared to other guns. The bolt release is located at the front of the trigger guard, with a small tab that needs to be pressed downward to close the action. Pressing upward on this tab will lock the gun open when holding the bolt to the rear. There is a button on the underside of the trigger guard, just behind the magwell that also acts as a bolt lock, though I never use this.

The controls are well laid out, which are some of the best ambidextrous controls I've seen. Ideally, the magazine release would be slightly larger, as I have had to hunt for it on occasion. Having the tabs on the bolt lock/release be slightly larger would improve operation while wearing gloves.

How Does The Beretta ARX-100 Shoot?

I fired 650 rounds through the Beretta ARX-100 across an 8-hour training event and a few range trips.

Beretta includes a single 30 round steel STANAG style magazine with the ARX-100. During shooting, I used several magazines to check for reliability issues, to include Magpul Gen 2 PMAGs, Lancer L5, Troy Battle Mags, Hexmags, aluminum USGI mags (with Magpul followers) and a Torkmag. Each magazine functioned flawlessly, for a total of zero malfunctions despite zero cleaning or lubricating. 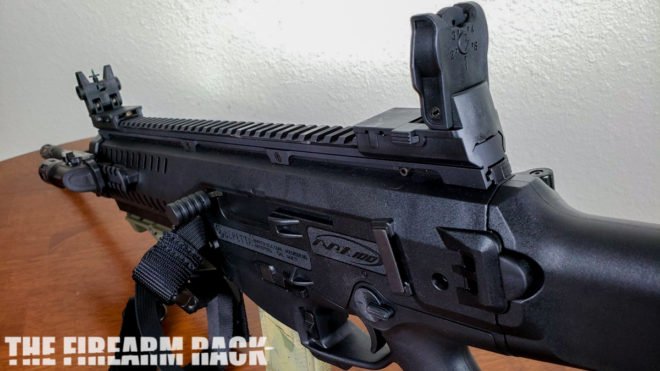 The ARX-100 balances well, with most of the weight being in the center of the rifle. A benefit of the large polymer chassis is heat dissipation. After dumping two magazines I felt no heat in any of the rails or handguards, despite smoke coming out from underneath them. The increased airflow allows for the rifle to cool rapidly--a benefit with such a thin barrel.

Transitioning to the ARX-100 from an AR-15 is relatively easy. Of course, it takes time to get used to a new platform, but I never once reached for a control that wasn't there. 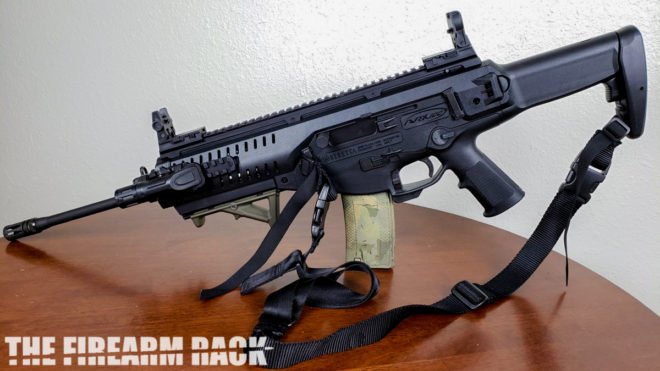 The Beretta ARX-100 is full of features indicative of a "next-generation" rifle designed in the early to mid-2000's similar to competitors like the FN SCAR 16S, Galil, and H&K G36C. While this may be an improvement for what militaries around the world, it comes up short on the commercial market. In no uncertain terms, unless you are wanting something that is NOT an AR-15, you will be better off with an AR-15 of similar price. That being said, due to its price point, the Beretta ARX-100 is probably one of the best values in its category, if you can get over the lack of aftermarket support.

Personally, I am happy with my purchase. Despite some shortcomings, the Beretta ARX-100 is reliable, (mostly) well thought out, and fun to shoot.

You can find more information about the Beretta ARX-100 on the check out the Beretta website. MSRP for the is set at $1950 as of July 2019 but the ARX-100 is available for significantly less if you shop around.

After a brief tease yesterday, Langdon Tactical announced their new optic mount for the Beretta 92 series of pistols. This is an effective first, helping [...]