Author’s note: This After Action Report/review is not all-inclusive. I want to give readers an idea of what to expect from not only Technical Handgun, but also the Citizens Defense Research mindset without spoiling the entire course. Wanting to know what else Technical Handgun has to offer? Go sign up for a class of your own!

Sunny with zero breeze. High of 73 that felt oppressive due to the dramatic temperature increase from the day prior.

7 Students, from the local area. Backgrounds range from former military and law enforcement, to corporate jobs, and more. Ages from mid-20's to late 50's. Guns range from a 1911, SIG P365XL, several Glocks, a Walther PPQ, and more.

I was very unfamiliar with both John Johnston and his course content before class. I'd seen him on a few short videos and listened to an episode of Ballistic Radio (a podcast he hosts), and that was about it. The price, location, and timing were the big draw for me to sign up. After several delays on my end, I finally took the class 10 months later and 600 miles away from home.

We rally in the classroom to start the day. Waivers signed, safety brief given. In addition to the standard safety rules, John has two additional rules that are critical to class: No unauthorized gun handling, and no muzzling other people. Failure to abide by those additional two rules will revoke your access to live weapons for the rest of the day. Violators will not be removed from class, but will be limited to dummy guns for the remainder of the day.

We begin the range portion of class with some empty handed exercises to demonstrate proper form. We test for weight distribution, grip pressure, effective stance, and more. John also shows us techniques for drawing and reholstering for both AIWB and strong side carry. 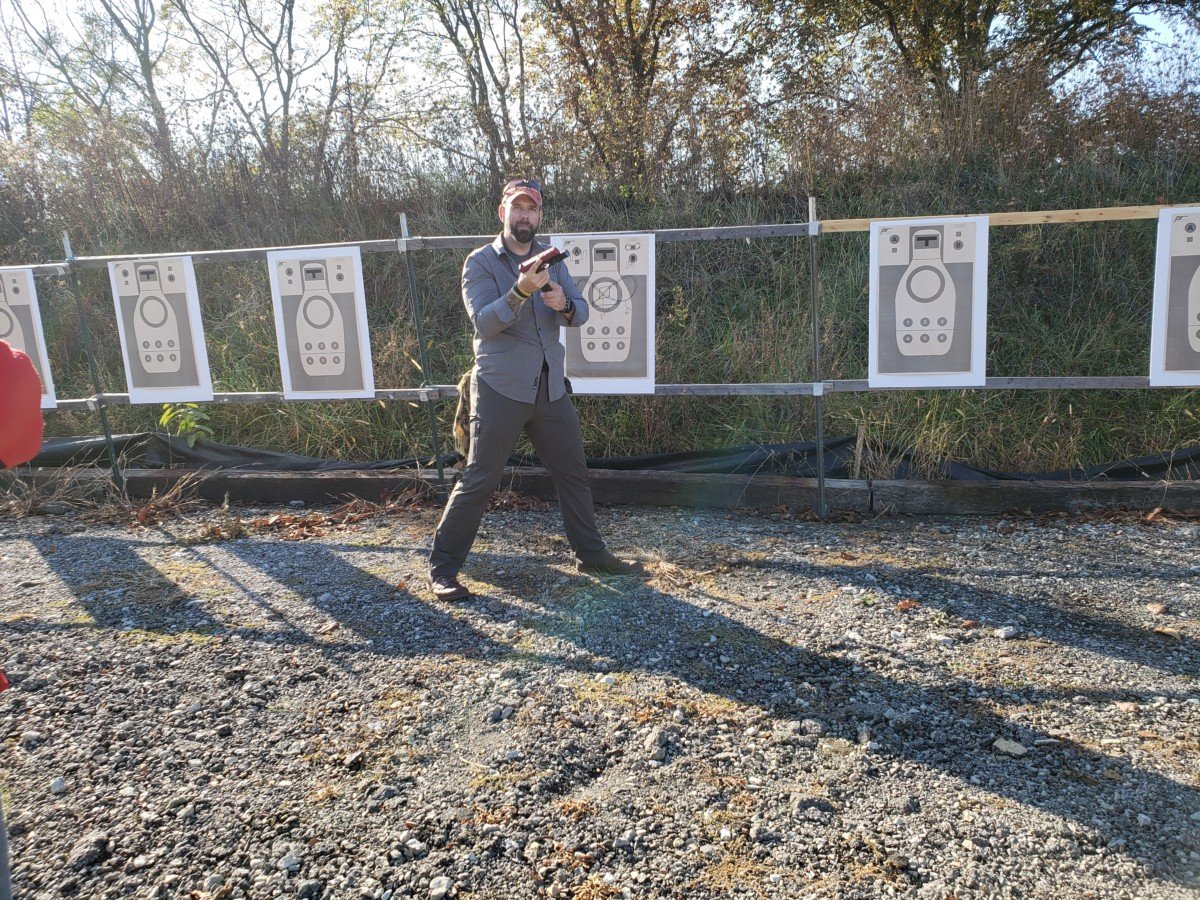 Once the fundamentals are established in dry practice we move onto live fire. To test how well we're applying what we've just learned, John tests our recoil control one by one. Shooters load a full magazine, get into position, then John runs the trigger for us. Firing at faster rates than (likely) anyone in class has ever reached, errors in form quickly show their face.

After this John establishes the pattern with which the remainder of class will be conducted. He demonstrates a technique or drill with everyone watching, explaining piece by piece the things he does and why. Then each shooter performs several repetitions individually, with John close by, watching our every move and providing constant feedback. Once each person has gone through the technique once, everyone forms a line and shoots together in a more traditional training environment. Wash, rinse, repeat this format for the rest of the training day.

A League of Their Own

This style is what sets this class apart from every other course I've taken. Typically, the worst shooters get the most attention, with the better shooters getting a fraction of the individual instruction of everyone else. John gives everyone nearly equal time. I was critiqued on my grip, weight distribution, cant of my shooting hand, and more. Never before have I received such scrutiny from an instructor, and I loved every minute of it. Just think how much further ahead you'd be right now if every class was conducted in such a way. Instead of taking a few nuggets of information from each course, you'd walk away with the whole stack.

There's more than just bragging rights at risk for doing well in class. The Top Shot is awarded two prizes: a Dark Star Gear holster of their choosing, and a flashlight from Surefire. Top Shot is decided based upon shooter's performance in various drills, culminating in The Test with No Name. I had seen this drill before, but never made an attempt. Shooters who pass the drill also receive a serialized challenge coin, which up to that point, none had been earned. I walked away with a light and holster, but the coin evaded my grasp. More importantly, I received some meaningful praise from John and the rest of class. Had I not won anything, the lessons learned were more than worth the price of admission.

This is one of two classes that I plan taking repeatedly, the other being ECQC from Shivworks. The other classes are all valuable, and all have helped me grow as a shooter. They're also closer to a Tactical Fantasy Bandcamp than a class once you arrive on the range. If you want something that will seriously help you as a shooter, sign up for Citizens Defense Research Technical Handgun: Tests and Standards right now. I'll be there in 2020, and you should be too.

If you're in the Dayton, Ohio area and need to find local training, take a look at Mushin SST, the host range for this class.

This is an AAR of my recent experiences with First Person Safety’s Defensive Pistol Skills class.  The thrust of this course is contextualizing the Four [...]

Introduction to Reactive Shooting is described as the functional equivalent of Day 1 of the Rogers Shooting School.  As the former lead instructor for that [...]