BLUF: The EAA Witness Polymer makes for a solid budget option for competitive, training, and defensive use.

Many of those who come to me seeking training or advice are in lower income brackets and find the idea of spending a months’ pay or more on a gun and gear incredibly difficult. Most people end up not becoming gun owners or purchase something along the lines of Hi-Point (review in the works) or another Saturday Night Special. With this in mind, I set out to find gear of high functional quality but doesn’t break the bank. The first purchase of my experiment was the EAA Witness Polymer, a full-size 9mm handgun based off the CZ-75 pattern. It cost me $273.54 from Tombstone Tactical (price as of May 2017) and shipped with one magazine and a plastic case. It has a limited lifetime warranty and has fairly simple disassembly, matching that of a CZ.

I have fired a little more than 500 rounds of various FMJ ball through the Witness with no malfunctions; some brands being:

For defensive ammo I chose:

I was unable to get a single round of the Gold Dot to feed. I used three different magazines, tried mixing ball and the Gold Dot, and still had no luck. However, the HST and Critical Defense cycled flawlessly. If you choose this pistol for defensive purposes, be sure to test out your preferred load before putting it into your carry rotation.

The double action trigger on the Witness Polymer is atrocious, the second worst I have ever used (first place held by the Walther PP). It is incredibly heavy, inconsistent, with no clear indication of an imminent break. Despite the horrendous double action pull, the single action trigger was surprisingly pleasant; the pull feels similar in weight to my Glock 19 or S&W Shield, but with less sponginess. Since this pistol has no decocker, my recommendation would be to carry cocked and locked, much like a 1911. Unfortunately, EAA made no effort to improve the safety of the original CZ-75, and in my case, actually made it worse. The lever is far enough forward that my medium size hands had difficulty getting a solid purchase without adjusting my firing grip, and the force required to deactivate the safety would frequently cause me to either use both thumbs or break my grip to get more leverage. This is a huge problem on a defensive gun, and I would suggest the end-user find some way to modify the safety with an extension, or potentially smoothing out the internals to make deactivation a less intense process. If it weren’t for the lack of a Glock-like dingus on the trigger, I would almost recommend carrying cocked with no safety, but paranoia/reason gets the best of me.

The sights are a typical 3 dot affair, with nothing especially good or bad about them. One thing of note, my example prints several inches low in comparison to my other handguns, roughly three inches at seven yards. This has been consistent across all the ammunition I tested, and no other accuracy issues have appeared. The action is surprisingly smooth, the only polymer guns I’ve fired being smoother are the SIG Sauer P320 and the Steyr L9-A1. This makes racking the slide a breeze for even the feeblest of shooters, especially if the hammer has been pre-staged. The Witness does have limited compatibility with CZ holsters, but aftermarket support is sparse due to the lower popularity of EAA’s polymer line. Magazines are reasonably priced at around $30 a piece and are made by Mec-Gar, ensuring that any issue you may have is probably not magazine related.

Overall, I have been very pleased with the EAA Witness Polymer. The issues cycling certain brands of hollow point ammunition makes slightly cautious me to recommend this as a defensive firearm, but its ability to perform with ball ammo has never faltered, making it excellent for range or match use on a budget. If you need a handgun for around $300, the EAA Witness Polymer is worth a look. 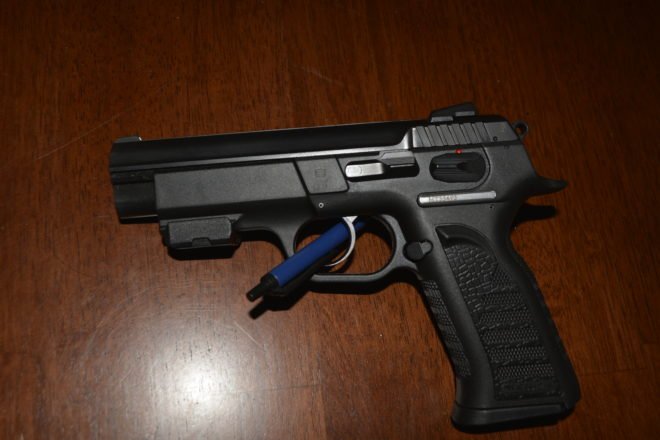