Blackhawk is one of the most well known holster and gear makers in the game. Their Serpa is extremely popular due to it's price and availability, while also extremely controversial due to its retention release method. One of Blackhawk's newer offerings is the Omnivore line of holsters. These seem to be a substantial upgrade over previous models. But how does it perform?

The Blackhawk Omnivore is a polymer outside the waistband holster that uses active retention to secure the pistol. The holster claims compatibility with over 150 models of handguns, and I believe it. A rubberized coating covers portions of the outside of the holster. This coating reduces noise when bumping into things, and protects it from impact. The muzzle end of the Omnivore if partially open to aid in drainage, and prevent the build up of debris. 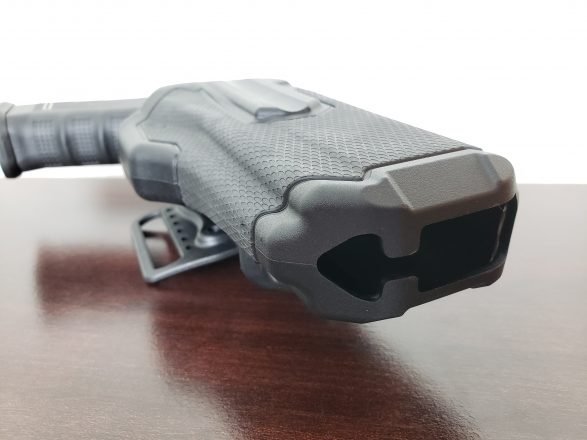 Users will find the holster is essentially a bucket for your gun, which is a result of its multi-fit design. Blackhawk includes plenty of wiggle room in terms of height, width, and barrel length. Everything in my safe with an accessory rail fits, from a 1911 to a Glock 34. Those running exotic long barrel guns may need to open up the bottom of the holster, but most folks will be fine.

This additional room for compatibility is not without downsides however. Due to the massive amounts of space around the gun when holstered, it is be easy for debris or prying fingers to get in the trigger guard. I wear medium size gloves and I am able to get enough finger in the holster to fully pull the trigger on hammer fired, double action guns which have a substantially longer and heavier trigger press than the average striker-fired pistol.

This is something to be well aware of if you're around children or in a situation where a gun-grab is a possibility. Think along the lines of open carry or a duty rig.

The Blackhawk Omnivore comes with two methods of attachment; fixed belt loops, and a large paddle. Typically I keep the paddle attached for the random student who shows up without a holster and belt. This method is quick and simple, but not very secure. The holster is easily pulled upward and to the sides within the pants, relying on a small hook to keep from being removed completely. Even with this hook, taking the holster from someone is nearly effortless.

The belt slide is more secure, having the wearer's belt slide through two fixed loops, similar to a Safariland UBL. This is the attachment I used when testing the strength of the Omnivore's retention. I recommend using the belt slide for it's improved security and consistency. 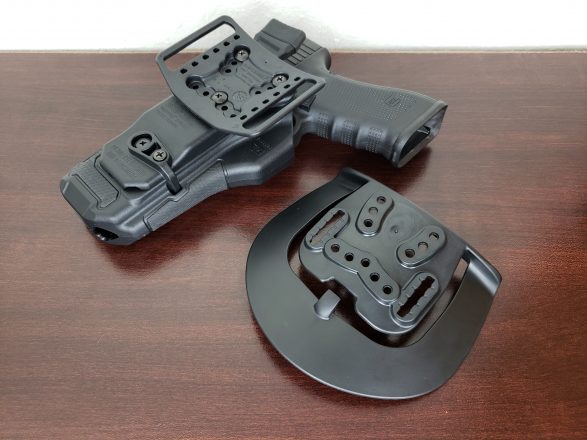 Both attachments feature several adjustments for cant. This allows the wearer to choose a straight up and down draw, or angle the holster to fit their preference. Angles can be both positive and negative, giving a good level of customization. The Omnivore is compatible with all Serpa mounting systems for further personalization.

The Blackhawk Omnivore does not get its retention from the gun itself. Instead the holster locks onto a small piece of polymer which is screwed onto the accessory rail of the pistol. The company calls this their Rail Attachment Device. This is how Blackhawk is able to claim such wide compatibility with a rigid holster. The locking tab is affixed using two small wood screws to provide clamping force against the gun's rail. Once inserted into the holster, the tab locks into place, retaining the gun. Blackhawk labels part of the tab as the front, but I have not seen a practical difference no matter what direction the tab is mounted. Two tabs are included with the holster, with spare sets running roughly $15.00. 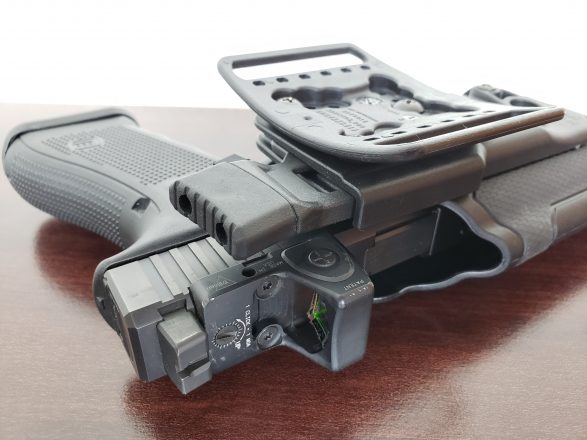 To remove your pistol, press straight down on the thumb release button located on the body side of the holster while drawing. The thumb release only needs to be depressed roughly halfway to remove the pistol, but a full press is recommended to keep from fumbling the draw. Similar to the Serpa, the release button must be pressed before starting to remove your pistol. Failure to do so will lock up the Omnivore, requiring you to press down on the gun while pressing the release, then draw the pistol.

Three different size spacers can be attached to this button to adjust the height for those with shorter or longer fingers. Spacers can be changed out with a phillips head screwdriver. I keep the tallest spacer mounted for ease of use across multiple wearers. Having the tallest spacer allows me to begin pressing the button before acquiring a full grip on the pistol. This ensures the locking mechanism is disengaged before trying to remove the gun.

Range Time with the Blackhawk Omnivore

The Blackhawk Omnivore is primarily a loaner holster for me. The few times I've taken to the range for my personal use has been with guns I don't own dedicated holsters for. It has seen a few hundred draws, in the realm of 300-400 repetitions. No extreme temperatures or hard use during range time.

Drawing is fairly smooth, but not to the degree of a Safariland ALS. There is a slight rubbery feeling hitch during the draw when overcoming the last bit of retention. The release has a distinct plastic feel, with some grit, when pressing downward. 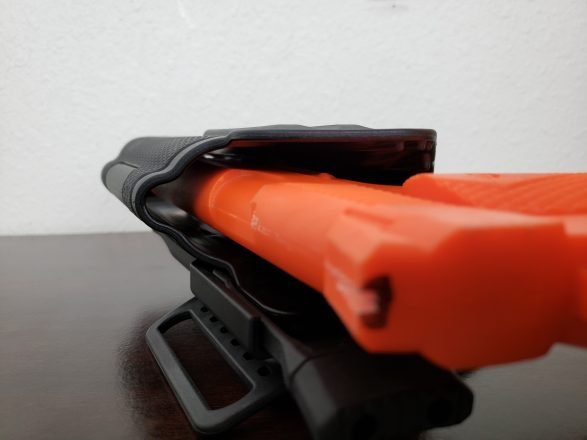 The front of the holster is cut down to near the front of the ejection port on most guns. This allows for compatibility with the majority of slide mounted optics. I've had no issues with the Aimpoint ACRO, Trijicon RMR, or Leupold DPP. Depending on your presentation style, this cut can also allow you to bring the gun on target slightly quicker as well.

Most issues I've seen from users are during drawing and reholstering. Drawing issues are described above, with shooters trying to pull the pistol before fully depressing the release. When reholstering some shooters will press the gun toward the front of the holster, which prevents the locking mechanism from grabbing the tab on the rail. To fix this, simply keep the gun toward the rear of the holster to reliably mate the tab and lock.

I do not have confidence in the Omnivore's ability to retain the gun in a violent entanglement. This is due to how the retention system works. In my own testing I have fully separated the gun from the locking tab on multiple occasions. Primarily by pulling forward on the gun when holstered, prying the two sides of the locking tab apart.

I have also managed to get the locking tab to jump notches in the rail by pulling straight up. This then allows for an easier trigger press, along with enough leverage to direct the gun towards the wearer's hips for a potentially lethal or crippling shot. With polymer frame guns this segment jumping results in some damage to the rail. On guns with a single rail segment, like Glock, the locking tab is completely removed.

I am able to perform both of these techniques with relative ease on myself, even with reduced leverage. Gun grabs on others wearing the Omnivore are even easier due to my increased ability to leverage the gun.

The Blackhawk Omnivore is both a good and terrible holster depending on the role it's placed into. As a range or match holster for cheap, I think it's a good option. As a loaner for students, or for someone who frequently changes pistols, it's a good option.

Used as a holster for open carry or a duty role, it is a terrible option. I wouldn't call it a Safariland killer, as some claim it to be. It is certainly safer than a Serpa or similar style holster, but is still lacking. For serious use, spend a little more on something from Safariland or other well proven holster. Otherwise, this might be a solid buy for you.

MSRP on the Blackhawk Omnivore is $59.95. Blackhawk also has models of Omnivore compatible with the Surefire X300 and Streamlight TLR-1 series of weapon lights at the same price point.

There are a few other considerations to make outside of Tom Givens' big four. While every holster needs to be Comfortable, Concealable, Secure, and Fast, [...]

Sidecar style holsters are an immensely popular option for conceal carry. After trying two of the leading options, in T.Rex Arms and G-Code, I was [...]

I first encountered Crossbreed holsters when one of the reps came into a local gun shop looking to get their products on store shelves in [...]