Sidecar style holsters have taken the conceal carry world by storm over the past few years. Used by highly popular influencers, such as Lucas Botkin, Garandthumb, and John Lovell, it's no surprise that folks are clamoring to get a sidecar for themselves. Coming in a handful of variations, it's easy to find something to fit an individual's preference. Despite their popularity, sidecar style holsters have a few fatal flaws which make them far from ideal when it comes to comfort and concealment.

What is a Sidecar Style Holster

First we have to understand what a sidecar style holster is, and why people carry them. A sidecar holster is an inside-the-waistband (IWB) concealment holster, typically carried in the appendix position (AIWB). They feature a physically attached spare magazine carrier, similar to the sidecar of a motorcycle, hence the name. This allows for a simple package, keeping your gun and spare ammunition together. Typically the spare magazine is canted outward for a more efficient reload, and to improve comfort of the wearer. The vast majority of sidecar holsters are made from kydex or boltaron, though there are leather designs out there.

There are three main variations on the sidecar style holster. These variations are organized on how the magazine carrier is attached to the holster. The most popular is the large solid piece, similar to the T.Rex Arms Sidecar. This specific holster uses a single piece of kydex for the front, and one for the rear of the holster, with the two bolted together. In doing so, we have what is commonly referred to as a "tactical codpiece", with a large, rigid holster sitting AIWB. 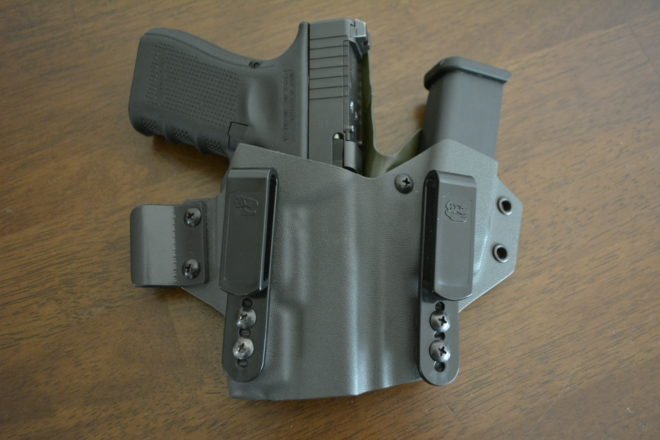 Next we have variants that have a removeable sidecar. Initially this was done using screws, like with the G-Code INCOG or the Tier 1 Concealment Aegis. This allows the user to remove the spare magazine for a lower profile holster, or to swap holsters/carriers. There is a little more flexibility here, as the connection point is frequently smaller, and less rigid than the T.Rex style of sidecar.

The last variant also features a removeable sidecar. The difference here is the attachment method. Instead of using screws or bolts, the two sides are lashed together with either paracord, elastic cordage, or similar material. This allows for substantially more flexibility between the holster and the magazine carrier. Users can vary how much slack is allowed by loosening or tightening the lashing.

Despite being a vocal opponent of sidecar style holsters, I'd be remiss if I didn't mention the advantages of the design.

Sidecar holsters are often very fast when reloading. The rigid designs help keep the spare magazine in a consistent position along the body, improving split times. Donning and doffing your rig is also simplified, with everything being self contained instead of using multiple pieces of gear. This is less of a factor, but can be a nice relief at the end of a long day. It also helps reduce the likelihood of forgetting something when running out the door.

Over the past several years I've carried over 25 different concealment holsters in my search for perfection. This includes three different sidecar designs; the T.Rex Arms Sidecar, G-Code INCOG, and T1C Axis. There are some serious flaws with sidecar style holsters. It is not a stretch to say that they're objectively inferior to a separate holster and magazine configuration. This is from a durability, retention, comfort, and concealment perspective.

A typical AIWB holster features some sort of wing or claw near the trigger guard. The claw/wing acts on the belt, driving the pistol grip into the wearer's body, improving concealment. Many sidecar designs also feature a claw/wing, however they are typically less effective. This is due to the belt also pressing against the magazine carrier that is attached to the holster. In essence, the magazine carrier is also acting as a wing/claw, resulting in opposing forces. These opposing forces end up pulling the gun away from the body, reducing concealment for both your pistol and spare magazine.

Some manufacturers try to remedy this by using a larger wing/claw than average. Essentially overcoming opposing forces by brute force. This can work, but not without side effects.

Imagine you are holding a thin wooden board. Grab opposite ends of this board and begin to push each side together, like folding a piece of paper. Eventually, the board will crack in the middle due to the pressure being exerted by your hands.

This is exactly what is happening with a typical sidecar style holster. As the belt exerts pressure on the wing/claw, and on the magazine carrier, opposite ends are bent towards each other. The tighter the belt, the greater the pressure. Typically the force is concentrated where the manufacturer has pre-bent the holster, trying to contour the holster to the body. Frequently, solid sidecar style holsters, such as the T.Rex Arms Sidecar, will crack and snap at their center point. How long this takes varies depending on use, pressure exerted, and manufacturing techniques, but it is an eventuality.

Sidecar style holsters using paracord, or separate but connected designs, like the INCOG or Axis, are substantially less likely to encounter these issues. The additional flexibility is typically enough to avoid snapping in half, and can often alleviate issues with concealment.

Depending on design, sidecar style holsters can present problems when it comes to retention. This is typically restricted to solid designs, such as the T.Rex Arms Sidecar. When adjusting retention on the pistol or spare magazine, the entire holster is affected. Loosening retention on the magazine will likely loosen the pistol as well, or vice-versa. This can be an issue when required levels of retention are not consistent between the two items. Many times, a well-fit pistol results in an excessively tight spare magazine; a well-fit magazine results in a dangerously loose pistol.

As we see opposing forces interact with overall durability, this can sometimes impact retention as well. Tiny movements of the holster can gradually work retention screws loose. A bit of loctite can solve this problem, keeping you from accidentally losing your gear.

An old trope we hear often in the firearms world is "a gun should be comforting, not comfortable." While this has some truth to it, it is not necessarily completely accurate. If a holster is causing pain or great discomfort, then the shooter is far less likely to regularly carry. Of course strapping steel and plastic to your body isn't the same as satin sheets, but we're not here to bathe in sadomasochism either. The best way I can describe a sidecar style holster is as as tactical codpiece. "Is that sidecar holster in your pocket, or are you just happy to see me?"

A significantly larger amount of material is needed to connect your holster and magazine carrier than is required for separate pieces of equipment. This excess material reduces our personal flexibility, and takes up far more space along our waistline. In any of my three sidecar holsters, I am strictly limited to carrying the holster up front. Bending over to pick things up, climbing, cycling, and even simply sitting are more challenging and far less comfortable with a sidecar design. Fatigue sets in far more quickly, as the extra material in noticeably less comfortable, with mobility restrictions becoming more taxing throughout the day.

With the T.Rex Arms Sidecar and T1C Axis, my ability to access front pockets is restricted as well. Struggling to access pockets can be a key indicator of something hidden on your person.

When carrying a standard holster and mag carrier, I'm also able to keep a SOFTT-W tourniquet in the 12o'clock position, along with my full size handgun and spare magazine. My current EDC consists of a Glock 34 with an Aimpoint ACRO and Surefire X300, along with aforementioned tourniquet, and a 22 round magazine (thanks Arredondo!) in either a Snake Eater Tactical or Bawidamann carrier. All of this, and my mobility and comfort far exceed what I get from any sidecar style holster I've used thus far. Plus I can get into my pockets with no issues.

The gun community is hyper focused on the gun aspect of preparedness. There are hordes of people carrying big guns and spare magazines, plus knives and more. Ask those same people if they carry medical or less lethal options, and that number shrinks like my nether regions on a cold day. Before we take steps to add spare ammunition to our EDC, we need to ensure that our equipment is well rounded. Personally, a tourniquet, then OC spray are must-haves before spare ammunition. If you're prepared to cause bleeding, you better be prepared to stop bleeding. Not to mention the prevalence of accidents in everyday life. A little bit of pepper spray could also stop an aggressor without the need for lethal force.

Once you have your bases covered, then look to a spare mag.

If you haven't noticed by now, I'm not a fan of sidecar style holsters. Choosing one likely won't be the difference between life or death, but it could significantly impact your quality of life in terms of comfort. Don't take my word for it, see what Jon Hauptman of PHLster has to say.

I've also had significant issues with my T.Rex Arms holsters, which I detail in my Sidecar review. If you absolutely must own one of these, my suggestion is the Tier 1 Concealed Axis Elite. It has proven to be the best sidecar style holster I've used to date, but still falls short of traditional designs. 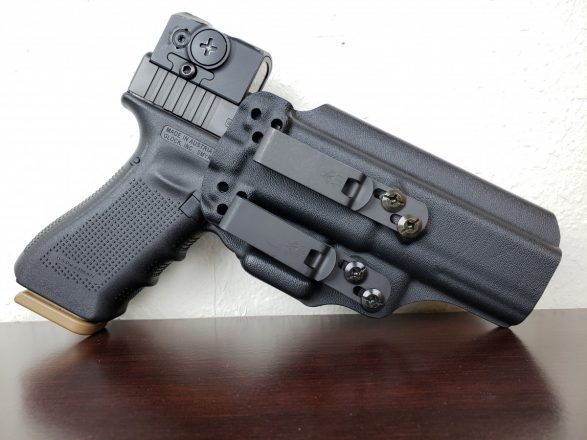 My recommendation is to check out quality options for standard holster and magazine carriers. Tenicor, PHLster, Dark Star Gear, KSG Armory, Bawidamann, have all served me very well. For IWB magazine carriers, Bawidamann, Snake Eater Tactical, and PHLster are solid options. To beat the dead horse, ensure you're covering all of your bases before adding spare ammunition. Medical equipment, handheld lights, and more should be the priority.

Safariland unveiled their latest duty holster, the Vault, during SHOT Show 2023. Check out the details below. Safariland Vault Duty Holster The Vault is the [...]

Sidecar style holsters are an immensely popular option for conceal carry. After trying two of the leading options, in T.Rex Arms and G-Code, I was [...]

There are a few other considerations to make outside of Tom Givens' big four. While every holster needs to be Comfortable, Concealable, Secure, and Fast, [...]