BLUF: The Ruger Security 9 shows promise, and may offer a great option both within in its price range and above.

Shortly after Christmas, was wandering around one of the local gun shops when an unfamiliar pistol caught my eye. It was the new Ruger Security 9, and it had just arrived earlier that day. After telling myself I’d spent too much money already over the holiday season, I walked away, determined to not add another gun to my collection. Unfortunately (or fortunately?) for me, my will is weak and my debit card is strong. With the Security 9 in hand, I immediately headed to the range and fired about 475 rounds through the new gun. 100 Rounds of Fiocchi 115gr ball, 125 rounds of Winchester white box 115gr, 180 rounds of Freedom Munitions American Steel 115gr, 20 rounds of Federal HST 124gr, 20 rounds of Hornady Critical Defense 115gr and approximately 30 rounds of Speer Gold Dot 124gr +P.

During the first range session, I had one case get stuck in the chamber which took several minutes to finally get out with a cleaning rod and one failure to eject. Both were with Freedom Munitions American Steel; a brass coated, steel cased round. Steel casings are known to expand when heated and can cause extraction problems like this; I'm assuming it was an ammo issue and not the gun. Aside from these, the pistol ran well, with no other hiccups.

The Security 9 seems to be just as accurate as anything else, providing similar groupings to my Glock 19 in both slow fire and rapid fire. I'm not a huge fan of the sights, they are nearly identical to stock Glock sights, but I was able to use them without issue.

To remedy this, Ruger currently offers replacement sights, which are identical to the stock but in various colors. The trigger is fairly light and much less spongey than Glock, however, it must be totally released before the trigger will reset which caused me to short-stroke the trigger repeatedly. The accessory rail is a standard 1913 type, and fit my Inforce APL (with the Glock insert) perfectly. The Security 9 wore the APL for roughly half of the first range session.

While I'd never trade my Glock 19 for a Ruger, I think that the price point between Glock and things like SCCY or Hi-Point is pretty open. Something that doesn't have quite as much detail, but is functionally sound, especially in a G19 size gun; The main competitors are Canik’s TP9SF Elite, the SD9VE, and EAA's Witness polymer, as well as the Ruger 9E. Neither EAA or Canik have significant aftermarket support or brand recognition (and the EAA won't feed certain hollow points). The SD9VE is a good gun, but is full sized and has little support even though it's an Smith & Wesson. 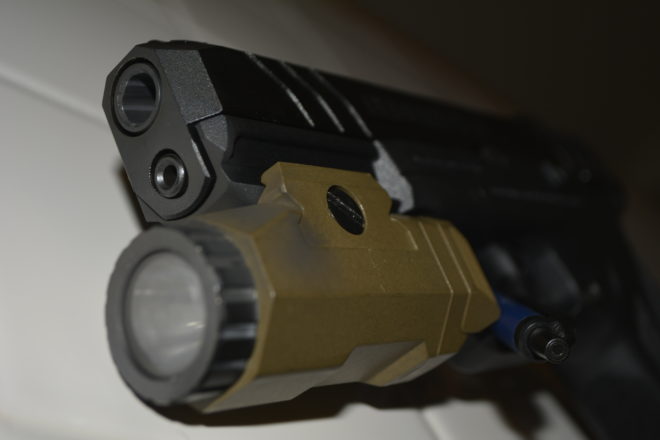 Ruger may have found a solid niche, especially if the Security 9 ends up being a quality product. There were already a few holster options upon release, and I anticipate there being a decent level of aftermarket support due to the large presence of Ruger. With an MSRP of $379 and a street price of just under $300, the Security 9 sits at a price point that is attainable by many of those who want or need a quality firearm but can’t afford to shell out the cash for a Glock or SIG. I’m looking forward to putting some more rounds through this pistol and seeing how it stacks up against the competition, so far I have not been let down.