The Venom Flash Hider is a muzzle device made by California based Strike Industries. It is touted as being one of the best flash hiders on the market, while still offering recoil mitigation. With a quite reasonable price, the Venom seems like a real golden ticket. How does it hold up during my review process?

The SI Venom came packaged with the flash hider and a new crush washer. The thread pitch for the Venom is the standard 1/2"x28, so after removing my A2 Birdcage, and my old crush washer, I threw on the new washer and began to thread the Venom. This is where my first gripe came up; The flats on the Venom are not sized for use with a standard AR armorer's wrench. This was an annoyance more than anything else, but I got a padded adjustable wrench and torqued the Venom down to the proper specifications.

The test bed was my 16" Aero Precision home build gun, and with the Venom on my rifle, I have to admit, it looks great. The Venom's four prong flash hider is machined in a very unique manner, giving off cyber-punk vibes. The angular-ness of it just makes me feel a little tingly. To describe it in one word, it's hot. All of this being said, do the looks equate to performance?

So does the Venom do its job? Well, yes. The muzzle flash reduction is very noticeable, compared to other muzzle devices. The flash signature is barely visible, and the dust kicked up while shooting prone was minimal. There is a drawback though, namely, the sound. With pronged flash hiders, some designs will lead to a ringing noise when the gun is fired. The Venom is no exception, with every round sounding like someone tapping a tuning fork. For me, this is a non-issue, but for some, it could be seen as a negative for some users.

The recoil mitigation element of the Venom is not massive but is noticeable. Compared to something like an A2 Birdcage, the Venom outperforms in keeping the gun on target. However, a purpose made muzzle brake or compensator will do a better job at recoil mitigation. I see the Venom as a flash hider more than a brake, as it excels in concealing muzzle flash.

After the 400 or so rounds fired with the Venom on the rifle, it had not loosened up, which is a big plus in my book. The finish on the Venom is a utilitarian parkerization, which did not wear at all during the review period. 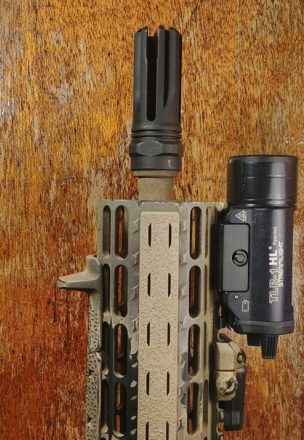 The Strike Industries Venom is a flash hider that does as advertised and does it pretty damn well. For the price that it sells for, it seems like an excellent addition to almost any AR build.