The market is inundated with Glocks and what are essentially Glock clones. This can be exhausting, and sometimes a guy needs something different. Something with a metal frame, hammer and a caliber that starts with a .4. I've covered God's gun and its derivatives many times before, but this one is a little different. This one is the Rock Island Armory Tac Ultra FS HC chambered in .45ACP.

If you know the 1911, then you know the Rock Island Armory Tac Ultra FS HC, at least for the most part. Controls are the same, take down is the same depending on variant. What sets this gun apart is in the frame.

This is Rock Island's take on a double stack 1911, commonly referred to as a 2011, a term originally coined by STI for their guns of the same style. For years this was a realm strictly reserved for those looking to spend roughly $2,000 or more on just the gun, and upwards of $75 on a single magazine. Here is where Rock Island Armory steps in; the Tac Ultra FS HC averages in the mid to high $700 range with its Para Ordnance style magazines coming in at $30 or less.

But how does a gun that is less than half the price perform?

The Rock Island Armory Tac Ultra FS HC features a standard profile 5-inch barrel, supported by a full-length guide rod. Nothing match grade here, but serviceable. Below is a full-length dust cover with a 1913 accessory rail. This adds a bit of heft to the front of the gun, helping to reduce muzzle rise and providing plenty of real estate for all of your tactical needs. 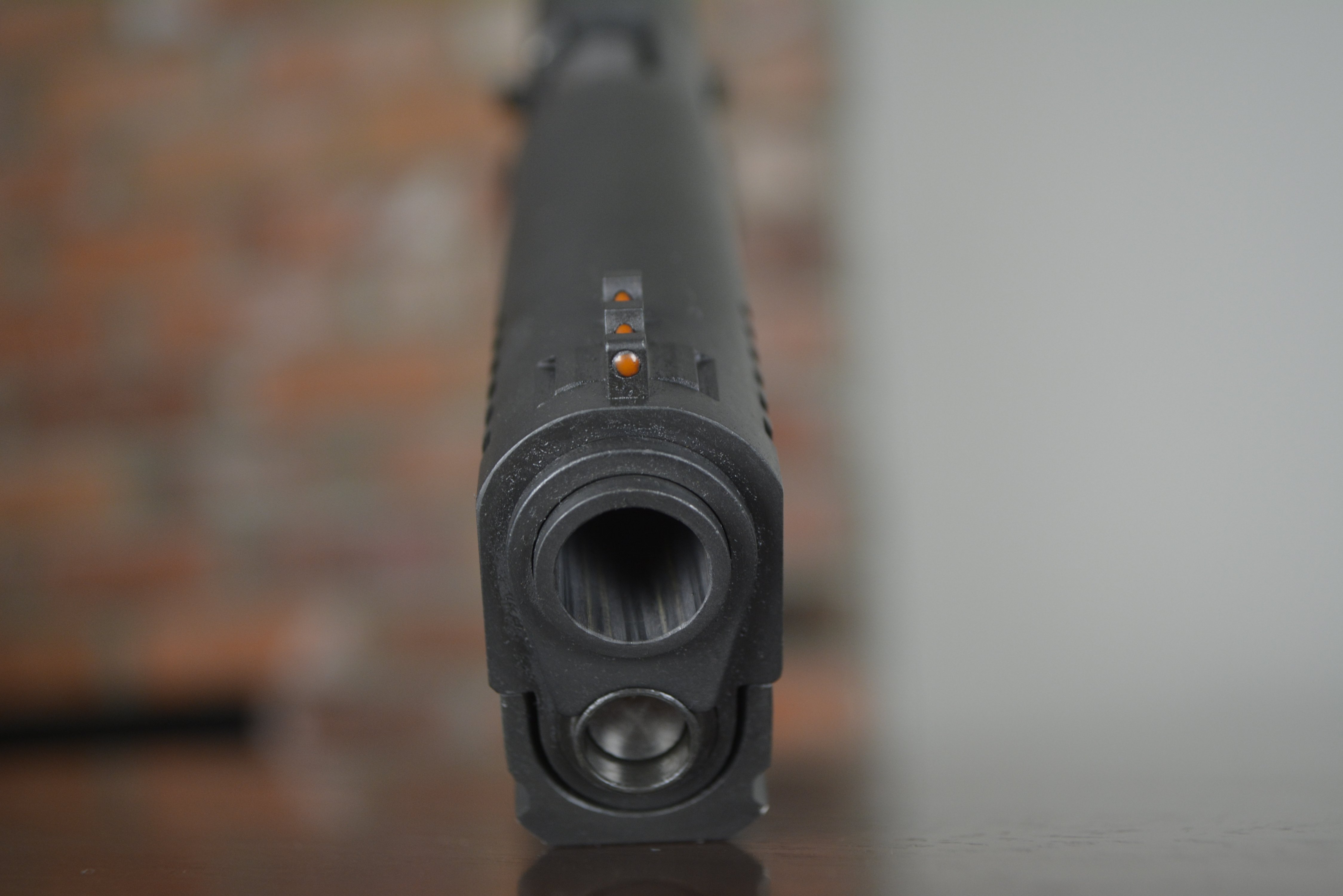 The front sight is a mildly thick red fiber optic. This is quickly tarnished by carbon buildup, turning the already dull tube into essentially a black blade. The rear sight is a standard two dot affair and is adjustable, though mine was spot on from the start and never lost zero. I'd like to see a brighter fiber tube on the front sight, as the current version is easily overshadowed by the white dots on the rear in certain lighting.

The trigger is adjustable for over travel, and Rock Island advertises between a four and six-pound pull. The trigger on the Rock Island Armory Tac Ultra FS HC compares well to the Springfield Armory Operator, with the former having slightly more play in every direction. The Tac Ultra has a completely flat trigger face, while the Operator's has a slight convex curve. Surprisingly, the Tac Ultra FS HC has a shorter and more tactile reset than the Operator, which is a huge plus in a gun that costs $400 less. 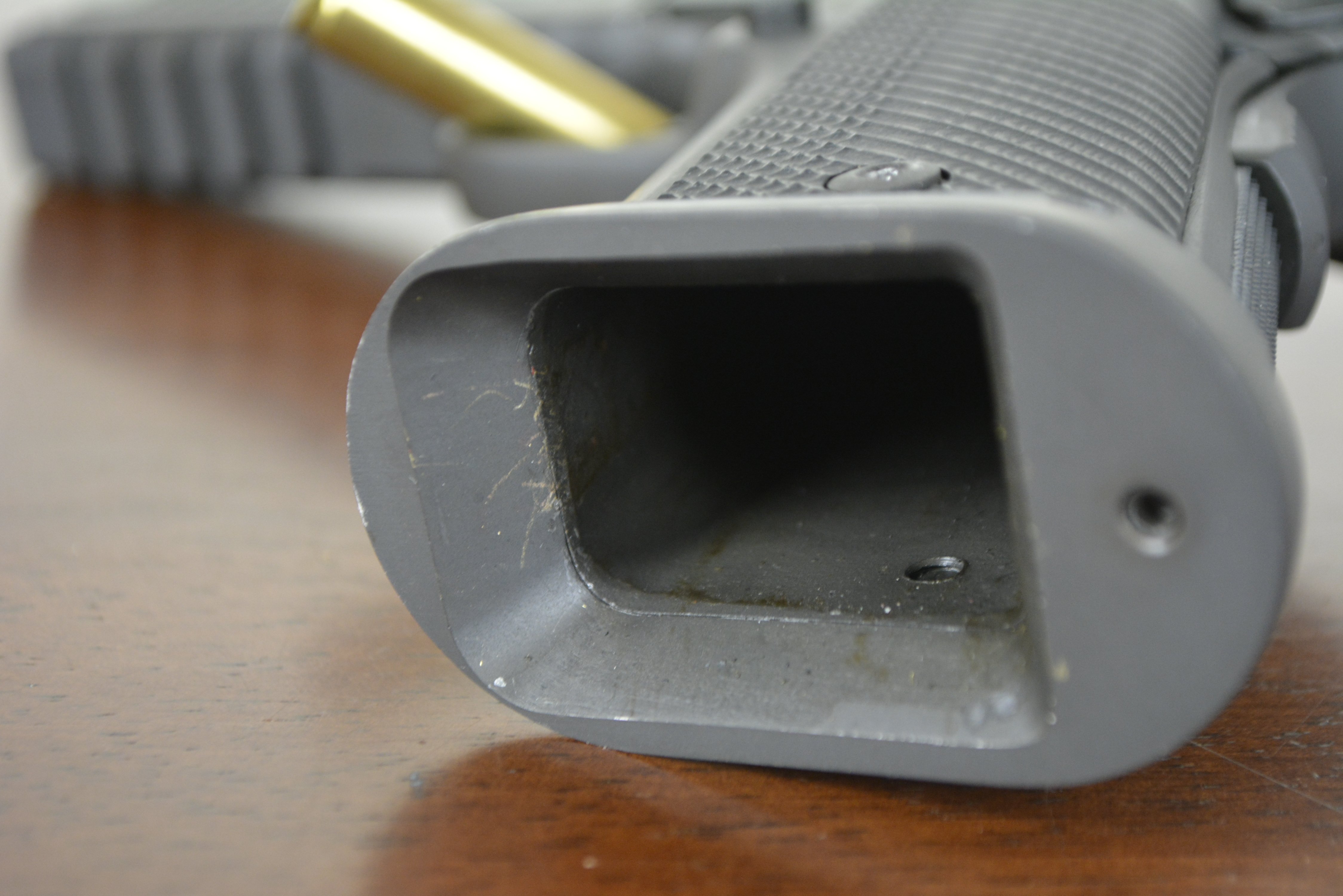 The Rock Island Armory Tac Ultra FS HC is the first pistol I've used with a flared magwell. Previously I scoffed the idea, thinking that I was perfectly capable of seating a magazine under stress. This gun made me reevaluate that thought. The magwell makes reloads possible that would never happen without one. Bringing magazines in at nearly 45-degree angles is no problem from any direction. The additional weight also helps keep the gun on target when firing.

The Tac Ultra FS HC ships with a single Para Ordnance type magazine, though two were provided for testing. RIA advertises the capacity as both 13 and 14 rounds on the product page. I have no issues loading 14 rounds in either magazine and it has not affected reliability. My only complaints are the lack of larger base pads and extended magazines. The base pads that come standard are nearly flush with the magwell, making it virtually impossible to rip a magazine out in an emergency.

The front strap is smooth, except for a channel down the center with mild vertical serrations within. Unfortunately, the channel does nearly nothing to improve purchase for the shooting hand; I'd like to see some checkering here, similar to what is on the mainspring housing (which is excellent). This would help lock the pistol in place during rapid fire. 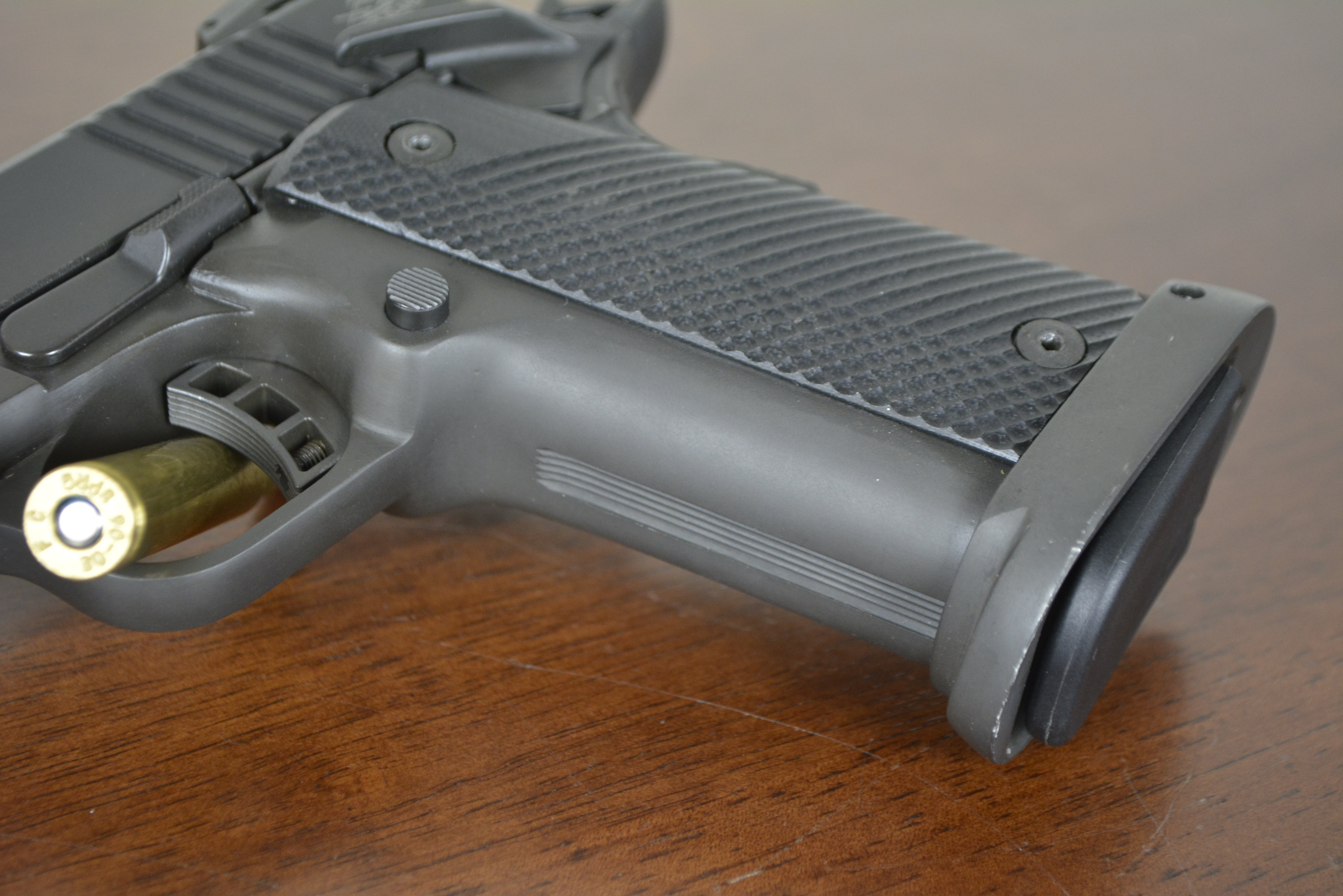 Grips are made from G10, and despite their appearance, are actually fairly gentle on the hand. The rear part of the grips, with the single diagonal lines may contribute to shooters losing their grasp under recoil; the smooth texture is aligned in the exact direction the hand travels as the gun rotates as from muzzle rise. The grip panels work themselves loose after a few rounds despite regular tightening. Not enough to fall off the gun, but enough to feel movement when firing. Some thread locker should fix this issue.

The ambidextrous safety is enlarged compared to a GI style 1911, or even a Delta Elite, but is on the narrow side in comparison to the Springfield Operator. This in combination with the thicker frame makes manipulations a little difficult when maintaining a proper grip, and near impossible with a compromised grip. One more millimeter of width could make all the difference.

The grip safety is somewhere in the middle regarding size: larger than on a GI pistol, but smaller than an Operator and other modern designs. Unfortunately, this is not a Goldilocks situation, as a larger hump is preferable for reliable activation of the safety--especially when situations where you are unable to acquire a proper purchase on the grip.

The area where the grip safety, the manual safety, and the frame all mate up is where the cracks begin to show, literally and figuratively. In higher end guns, each of these pieces is hand-fit, transitioning seamlessly, making for one smooth surface. This is not the case with the Rock Island Armory Tac Ultra FS HC.

There are gaps between parts, with harsh edges making for a somewhat jagged surface for the shooting hand. These pieces make themselves apparent under recoil, as they rub into the thumb riding the manual safety, as well as the web of the hand wrapped around the grip safety and frame. After the first range session, a blister began to form. Putting another 100 rounds down the pipe the very next day, I converted it into a nice callus. Even with thicker skin, my 100+ round range sessions would leave my thumb a bit tender. Not a deal killer, but something to be aware of. 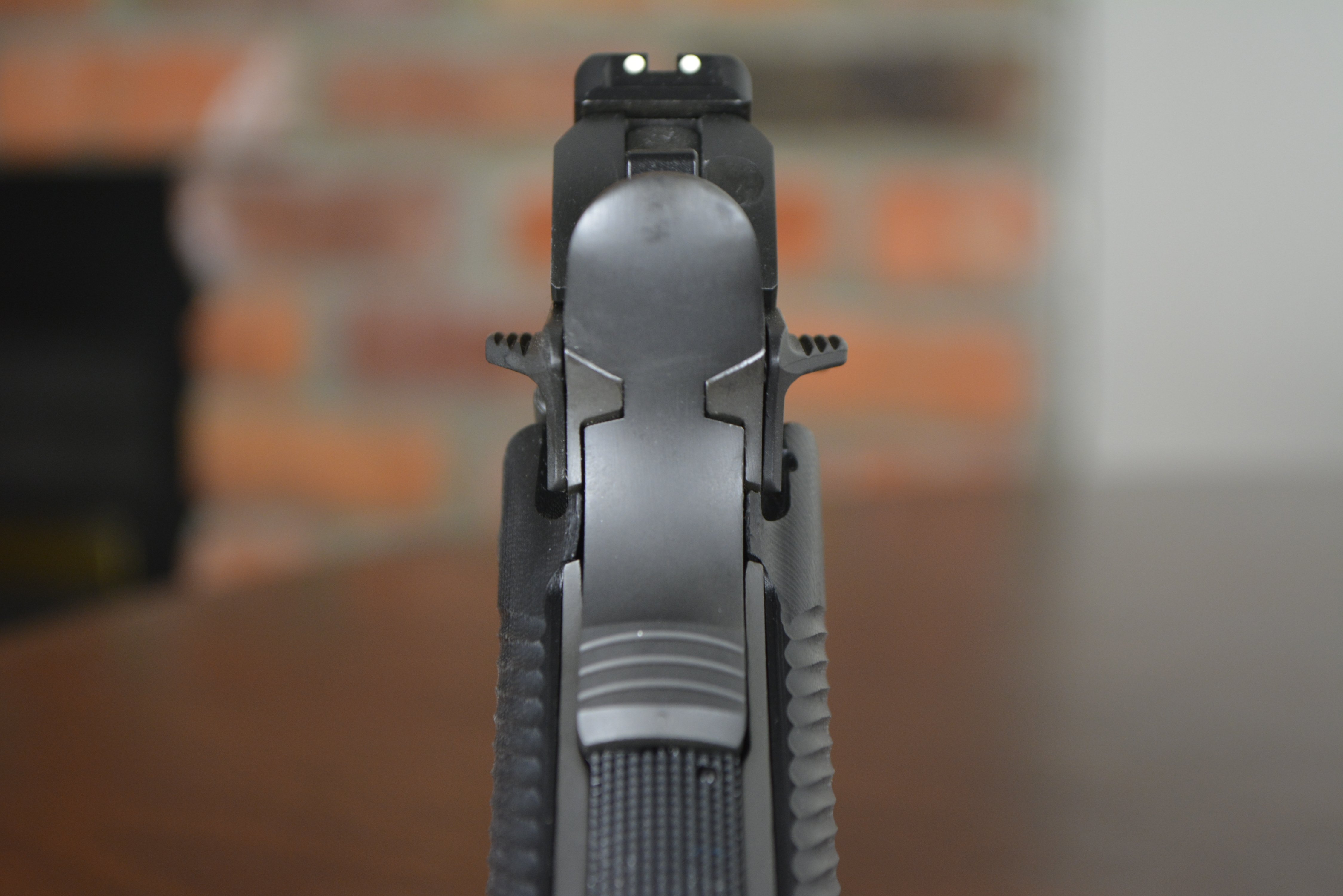 For some shooters, this will be a massive turnoff, as most people are averse to pain. Personally, I see it mostly a non-issue, as toughening up the hands can prevent this from becoming a problem. Some quality time with high grit sandpaper, or a quick trip to the local gunsmith to smooth everything out should solve this easily.

Now for the part that everyone cares about--reliability.

Over the course of two weeks I put 610 rounds of the following .45ACP through the Rock Island Armory Tac Ultra FS HC:

Throughout testing, I lubricated the pistol once after the first 50 rounds, and never cleaned it again. Between range trip,s the gun saw roughly 200 reps of dry fire without any snap cap use. I encountered exactly zero malfunctions, hiccups, or "oh shit" moments. All shooting took place indoors, between 3 and 25 yards.

While the Rock Island Armory Tac Ultra FS HC may lack some of the finer details of higher end 1911's, it functions just as well as guns twice the price. This pistol has been a pleasant surprise and is one I would be happy to add to my collection. If you are in need of a medium capacity, large bore handgun for either competition or defense, the Tac Ultra FS HC could serve you well.

The MSRP is $906.00 but street prices seem to hover in the mid to high $700 range for both .45ACP and 9x19. It was in stock at the first ten online retailers I searched, so buyers should have no trouble finding one to call their own.

Author's Note: The Tac Ultra FS HC was sent to me on loan by Rock Island Armory for evaluation and Armscor also provided 250 rounds of Armscor .45ACP 230gr FMJ ammo for the review.