I'm not one for "special edition," or commemorative versions of guns. If you're into them, more power to you. They just don't float my ballistically aesthetic boat. But SIG SAUER's announcement that they're issuing a new version of their popular P938 compact 9mm pistol engraved with the flag and the word 'STAND' in big block letters on the slide caught my eye.

SIG says they're teaming up with distributor United Sporting Companies on the gun as "an outstanding idea to show support for our country and our flag, and all they stand for,” in support of veterans and first responders. So why engrave 'STAND' on the slide? Who doesn't stand for our country or what it represents?

Well, NFL players come immediately to mind. At least some of them have been conspicuously kneeling during the national anthem this season and it hasn't been good for the league's TV ratings. Or pizza sales. Let alone chicken wing consumption.

So is SIG's new P938 a thinly veiled shot at the Colin Kaepernicks and Michael Bennetts of the world? SIG probably won't want to make the connection (at least not publicly). You, however, are free to draw your own conclusions. Here's SIG's press release . . .

Newington, N.H. (January 11, 2017) – SIG SAUER, Inc. introduces a special edition of its venerable P938 platform designed to honor America and our flag, as well as show support for our nation’s veterans and first responders who protect and defend our freedoms every day.

Made with pride in Newington, NH, the 9mm P938 STAND has a slide engraved in the likeness of the American flag with the word “STAND” boldly displayed on the ejection port side of the gun. It also has custom black grips featuring a medallion embossed with a flag in flight. SIG SAUER teamed up with United Sporting Companies to offer this unique firearm and to donate a portion of the proceeds from the sales to H.A.V.A. (Honored American Veterans Afield), which works with wounded veterans and active-duty military, and C.O.P.S. (Concerns of Police Survivors), which helps support the families of fallen law enforcement officers. 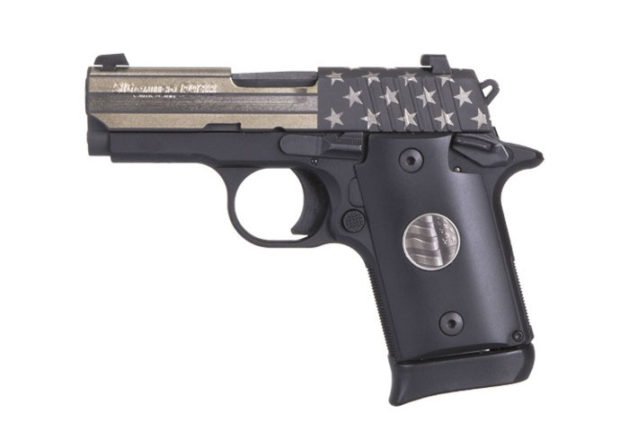 “When United Sporting Companies approached us with the STAND concept, we immediately thought it was an outstanding idea to show support for our country and our flag, and all they stand for,” said Tom Taylor, Chief Marketing Officer and Executive Vice President, Commercial Sales, SIG SAUER. “The concept of supporting veterans and first responders made the idea even more compelling.   It is important to us at SIG SAUER to find ways to work with service organizations like H.A.V.A. and C.O.P.S. in order to support our injured veterans and the families of fallen law enforcement officers. That commitment is at the very core of SIG SAUER’s DNA.”

“We felt that the STAND idea was a great idea to honor our country and those who serve America,” said Brad Johnson, CEO, United Sporting Companies. “Our veterans and first responders are the finest examples of what we as a country have to offer. Their selflessness and commitment to put the needs of others above their own deserves our admiration and eternal gratitude, and we should all do what we can to support those who have given so much.”

You can also look for variants of the STAND product in a SIG SAUER P238 and 1911 in the near future.

SIG SAUER, Inc. is The Complete Systems Provider™, leading the industry in American innovation, ingenuity, and manufacturing. SIG SAUER® brings a dedication to superior quality, ultimate reliability, and unmatched performance that has made it the brand of choice among many of the world’s elite military, government and law enforcement units as well as responsible citizens. SIG SAUER offers a full array of products to meet any mission parameter, including handguns, rifles, ammunition, electro-optics, suppressors, ASP (Advanced Sport Pellet) airguns and training. The largest member of a worldwide business group of firearms manufacturers that includes SIG SAUER GmbH & Co. KG in Germany and Swiss Arms AG in Switzerland, SIG SAUER is an ISO 9001: 2008 certified company with more than 1,600 employees. For more information on SIG SAUER, any of its products, or the SIG SAUER AcademySM, please visit on to sigsauer.com.