It's become increasingly difficult to comprehend the cascade of incompetence and failure by those in positions of authority that led up to and culminated in the Valentines Day massacre at Marjory Stoneman Douglas High School. With each passing news cycle, we get another revelation of bureaucratic bumbling and ineptitude. No novelist could concoct a more surreal or depressing story than that of Nikolas Cruz and the lurching clown show of school administrators and law enforcement agencies who interacted with him -- or didn't -- over recent months and years.

Consider Cruz's proclivity for torturing animals (and posting photos of them on Instagram). Or his penchant for bringing weapons to school. His attempts to predict his future on YouTube. The 39 visits Broward sheriff deputies made to his home (they might as well have opened a substation there).

Let's also not forget Douglas High School administrators who, rather than reporting a kid with a history of violence to police who was caught with knives and ammunition on school grounds (those are felonies), decided to shunt him off to another school within the district to keep their number of reported incidents down.

But wait...this jaw-dropping tale of not-my-problemism manages to get even worse. Because we certainly can't overlook the zero f*cks given by the FBI -- our elite federal investigative agency that was alerted twice -- about the threat posed by a kid who raised more red flags than the Soviet Union on May Day.

And finally, yesterday, as we heard yet again that arming teachers is "colossally stupid" and a "recipe for disaster," we got word of the government agency failure coup de grace:

The school resource officer on Feb. 14 took up a position viewing the western entrance of that building for more than four minutes after the shooting started, but "he never went in," Broward County Sheriff Scott Israel said at a news conference. The shooting lasted about six minutes. 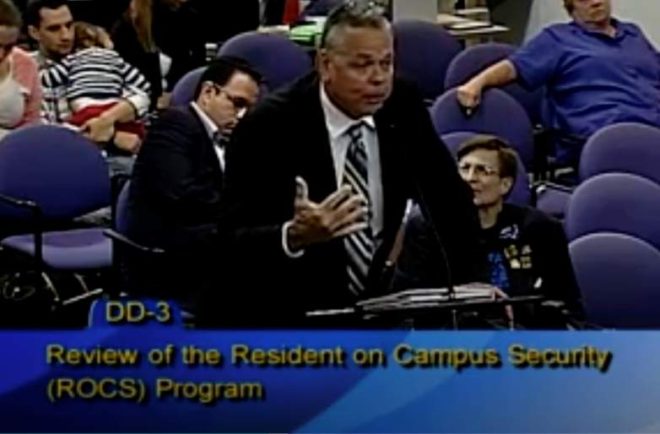 Let's recap, shall we?

Law enforcement's rote mantra since 9/11 has been, 'If you see something, say something.' Lots of people said lots of things to all the right people about Nikolas Cruz over the years and no one in a position of authority did anything. That includes the armed cop who cowered outside the school for at least four minutes while the murderer walked down the school's halls, mowing down teachers and students.

What's happened as a result of these revelations?

Only Peterson, the useless armed "guard," mustered a last shred of remaining decency to quit in apparent shame.

And yet, if you're consuming mainstream media reports or listening to the Broward County Sheriff and politicians pontificate, you'd be forgiven for thinking that the only people to blame for those 17 dead Floridians are the National Rifle Association, the Republican Party and America's 100 million or so law-abiding gun owners. Go figure.