In April, I had the opportunity to attend a lecture from Active Self Protection titled “Lessons Learned from Watching 25,000 Gunfights.” This lecture was a virtual version of the presentation John Correia presents at various training events, such as the Rangemaster Tactical Conference. Up front, I’ll say that offering the lecture virtually in the midst of the COVID shutdowns was a wonderful gesture on his part.
So, let’s get started.

On training, Correia preaches the “Three R’s.”  Training must be (1) recent, (2) relevant, and (3) realistic. There is a relevancy gap between fighting with a platoon of Army Rangers in Afghanistan and fighting by yourself in a gas station on New Year’s Eve. Likewise, while competition has its benefits, firing 2 shots per target on a 19-target USPSA stage probably isn’t a realistic engagement for a civilian defender. Recency, obviously, speaks for itself: qualifying on a pistol in the police academy twelve years ago with no subsequent training doesn’t do you any favors.

Correia distills his observations of what real defensive encounters actually look like in order to guide training. His working theory is to get very good at the skills used 80% of the time.  After that, he says to work on the stuff that’s used only 20% of the time. In other words, practicing a pistol shot on a moving hostage target at 25 yards is less of a training priority than drawing, moving, and firing 5 rounds to a target at 6 yards. 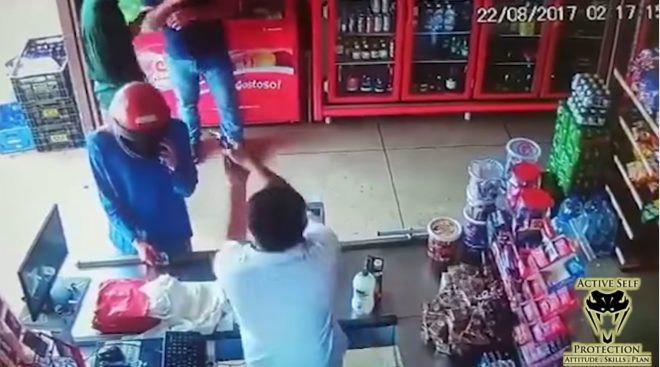 Correia uses video observations to distill what that 80% looks like. While I’m not going to list all – or even most of them – I did want to discuss a few of what, in my opinion, were the more salient points. If you want the whole thing, you need to take the class.

Correia freely admits the limitations of his work: his analysis is not statistically-valid for a variety of reasons. The “data” is more like a detective calling something a trend than a statistical analysis. However, he takes the view that if something were frequently happening in these encounters, he probably would have seen it by now. Likewise, cameras have their own limitations: they don’t work how the human eye works, they can skew perspective, and they’re often not even close to a first-person view.

The Differences Between Self-Defense and Law Enforcement

For a civilian defender, there is a relevancy gap between CCW encounters and law enforcement encounters. In law enforcement, fights go like this: (1) the LEO starts the contact – a call, a traffic stop, etc. (2) the subject does something to make themselves a lethal threat, and (3) the fight ends with the subject in custody (or incapacitated). Conversely, for CCW, the fight goes like this: (1) the attacker starts the contact – a robbery, an assault, etc., (2) the defender produces a weapon, and (3) the fight ends with the defender breaking contact. In other words, while a civilian defender is often taken by surprise, he or she starts the actual fight. 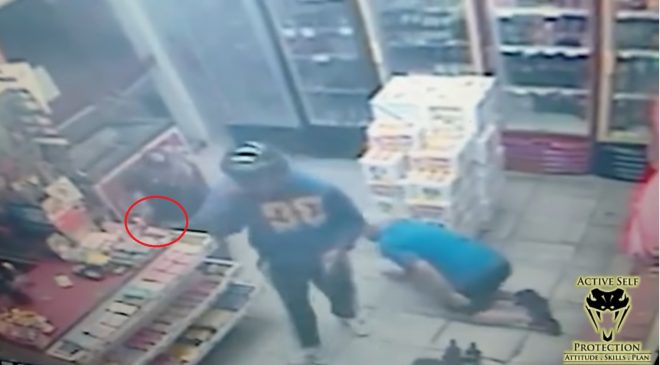 A private citizen drawing a gun on an armed robber who has ordered everybody to the floor.

A winning civilian response to a robbery can involve retreating into a side room, waiting your turn, and initiating the fight itself on your terms. However, winning law enforcement response almost always requires the officer respond to and then close with and capture a suspect.

Skills for the Average Fight

Correia’s work exposes the myth of “3 yards, 3 shots, 3 seconds.” In his observation, the average defensive encounter starts at 3 to 7 yards, often stretches further as the fight progresses, lasts around 7 seconds, and involves anywhere from zero to 20 shots. 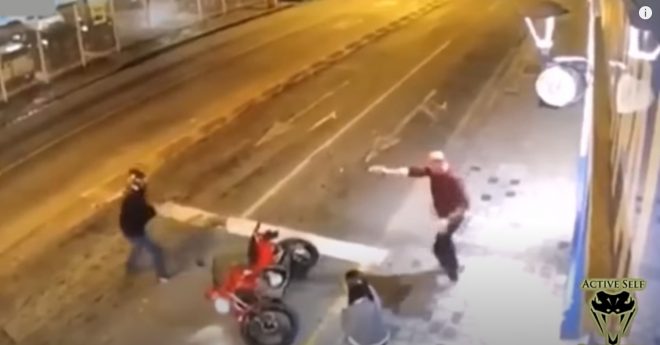 A fight that started at arm's length extending further.

In that fight, “being first is foremost” – the person who scores the first good hit almost always wins. From this, Correia asserts the gun should be carried ready to fire. He states the defender must be able to quickly retrieve it and deliver an anatomically-significant hit. For this, he suggests an 8” circle.

Speaking of that average fight, he estimates that roughly 1/3 of the encounters he watches involve multiple attackers. When asked, he responded that the largest group of attackers he has seen was 10.  He also states that it is extremely rare for a defender to engage more than 2 or 3 out of a group. As Correia says, “kill the first one and word spreads.”

In that fight, people often use cover or concealment. Correia states, “concealment isn’t cover, but 99% of the time it works the same” in CCW contexts. To illustrate this, he shows a video of people in a convenience store refusing to shoot through aisles of candy bars. In defensive encounters, people generally don’t shoot what they can’t see.

Obviously, there was much more discussed than what I wrote about above. Again, you’ll need to take the class to find out everything. Overall, this course is well worth the money. It offers a solid training opportunity during a time when many Americans were under a shelter-in-place order of some sort. Analyzing videos of defensive encounters is definitely the lane Correia has established for himself. I strongly recommend his material.

Primary & Secondary is well known for their podcasts and Facebook groups. For years these have been places where serious shooters gather to discuss all [...]

Author’s note: This After Action Report/review is not all-inclusive. I want to give readers an idea of what to expect from not only the Rangemaster [...]