If you are looking to spice up your AR-15 mags the options are pretty limited. You can paint them, Duracoat them, Cerakote them, or use something like the GunSkins AR-15 Magazine Wraps. GunSkins sent me several of the magazine wraps to give them a try. I will admit, I don’t mind my mags being boring and black, but I am willing to give anything a try. 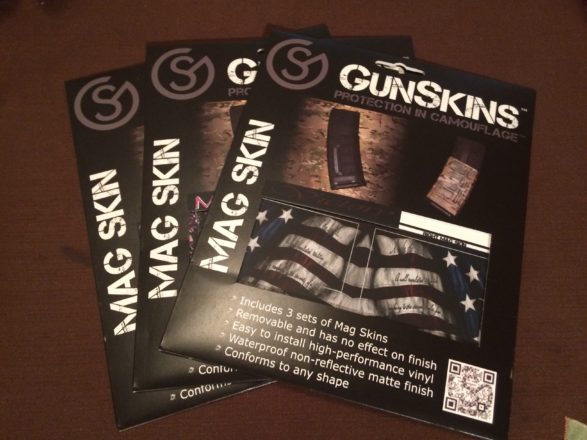 I pulled a few Pmags out of my pile for the test. 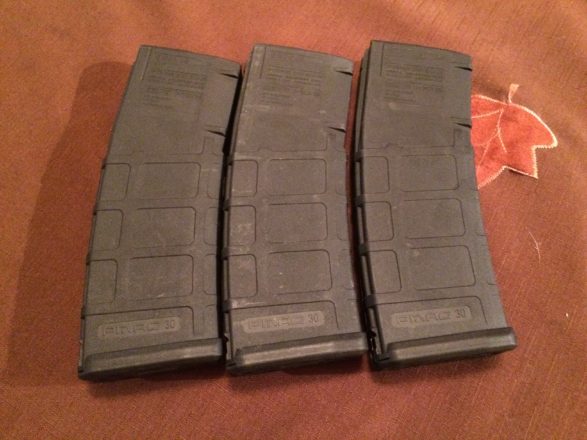 GunSkins sent me three different patterns to try out. I decided to start with their Victory pattern. You can find it on their website here. Pulling it out of the package you see that each pack has enough of the wrap to do three mags. The sides are clearly labeled right and left. 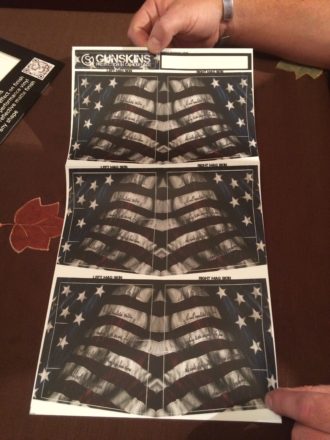 The Mag skins are easy to remove and are nicely cut and didn’t give me any issues when removing die cut panels. 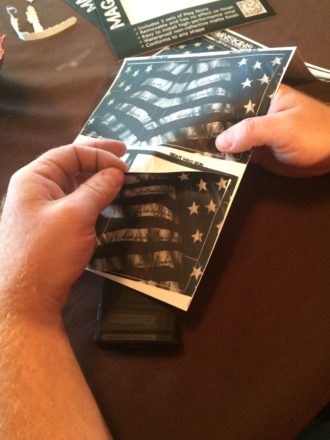 Attaching the panels to the magazine is as simple as laying it on the correct side and applying it like a sticker. You can see the cuts that allow you to wrap the panel around the spines of the mag. 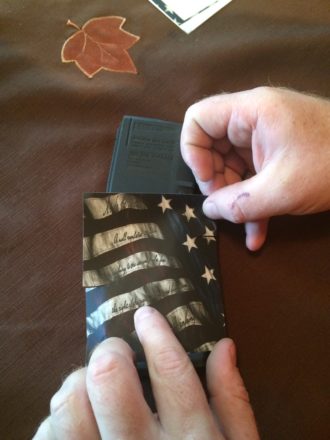 Even before adding heat the mag looks pretty nice! 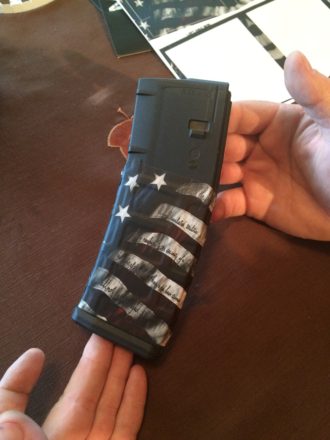 Next, I applied the Muddy Girl wrap. My wife isn’t a shooter, so this one was for you guys. I do have to admit, I was a bit let down by the pattern though, I think that the one on their website is more in line with what the target audience would want, pink. 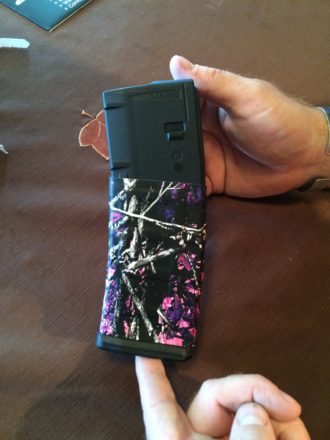 the last design that they sent me was their Skull Tan, again you can see this on their website. You can see I skipped right to the heat gun with this one. 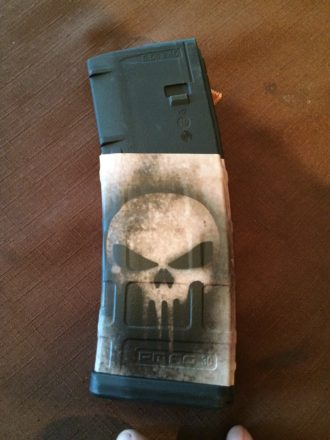 I am sure you can use a hairdryer, but I didn’t have one. I did have a heat gun in the garage. 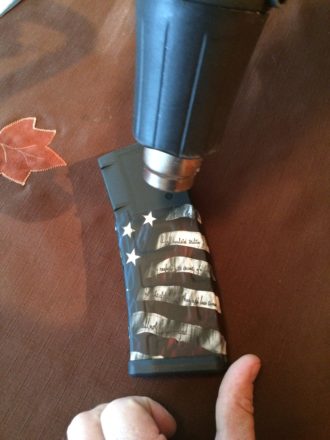 I started applying pressure to the wrap to get the wrap to conform better to the magazine’s surface. The wrap started to look really good. The only downside was the magazine got really warm to the point of being rather uncomfortable to keep working the wrap into place. I had to come up with a solution. 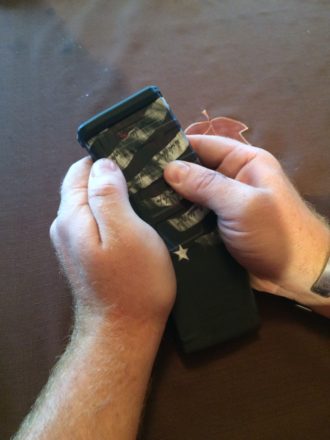 The best solution I could come up with was using a microfiber towel instead of my fingers. It sure did help keep the heat at bay. 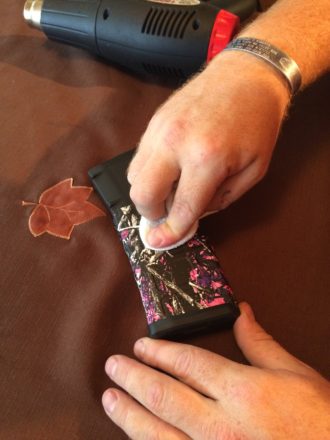 Using the heat gun and towel method I was able to get pretty good results. The GunSkin magazine wraps cling to the sides of the magazine nicely, but the spine proved to be a bit of a tough area. I wasn’t able to get that to conform to the body of the magazine. 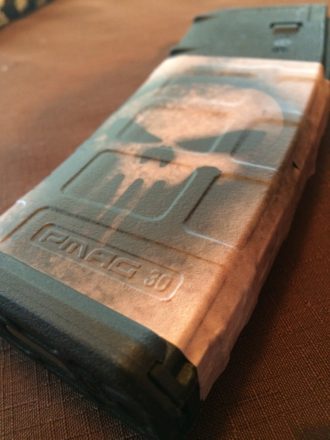 All three looked pretty good after spending some time with the heat gun and towel. 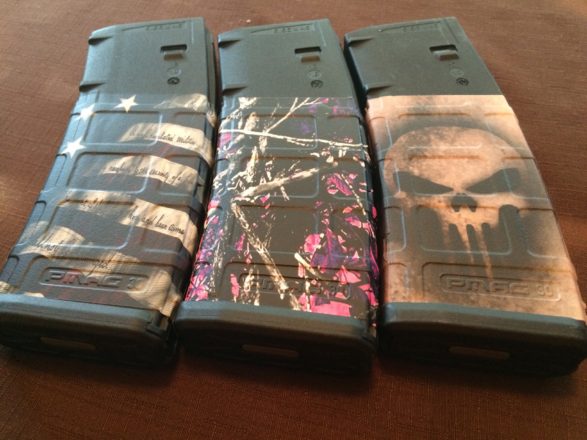 I wanted to see how well the mag wraps held up to water, so I dumped one into a bucket for a couple days. 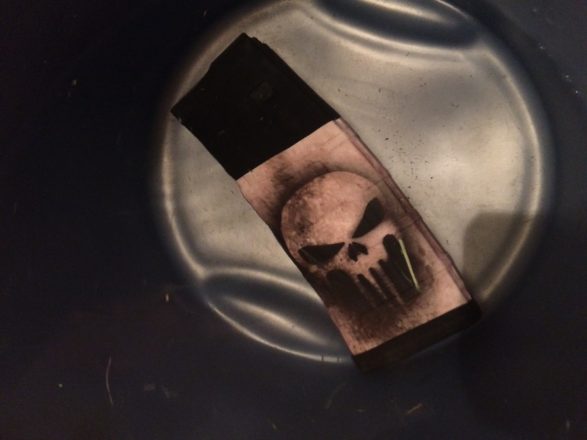 It showed no sign of being underwater for 48 hours when I pulled it out. The waterproof claim is confirmed! 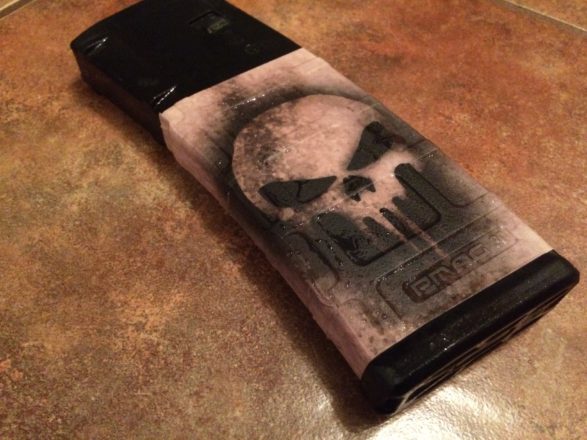 I also wanted to see how the magazine wrap held up to abrasion. What better way than the standard “I’ll just run it over” test? I can’t think of one. 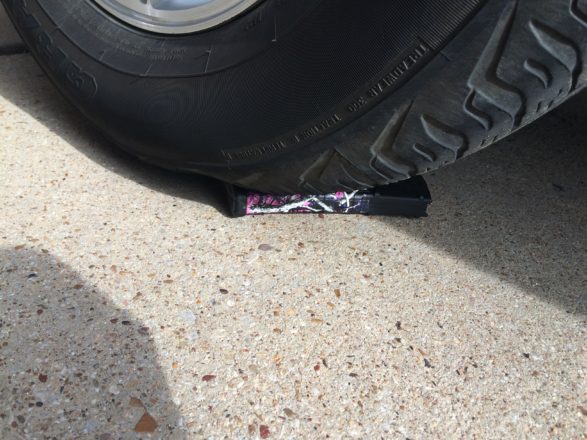 It handled the weight of my Tacoma quite nicely. Only a few dents and scrapes, doesn’t look too bad to be honest. I’ll have to run it over harder. 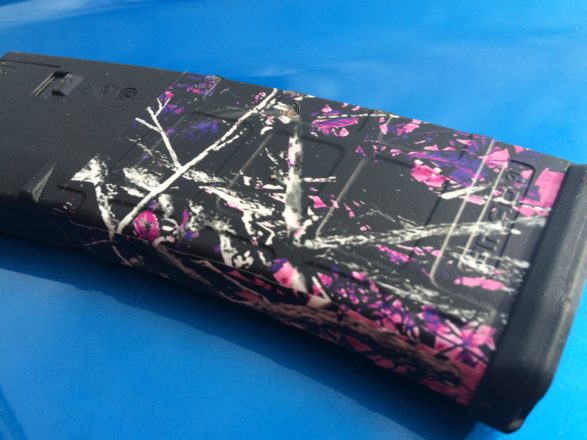 How about spinning the wheels? That should provide enough abrasion right? My wife was not thrilled with this particular part of the test and my neighbor Todd thought the sight of me driving over a magazine a few times as a sure sign that I had lost my damn mind. He might be right.

Success! It took me basically doing a burnout on top of the mag to get any real wear.  I have to admit, the GunSkins magazine wraps are pretty tough. 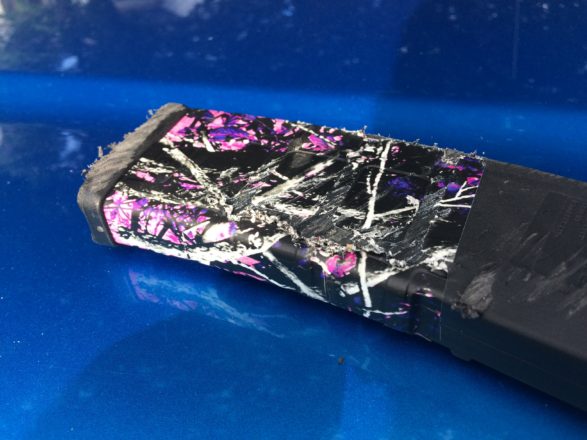 After taking a closer look at the GunSkins magazine wraps, I am a bit more receptive to the idea if they offered a pattern that I found attractive. The packaging had a multicam picture on it … I want that one.

As I said earlier, if you feel that your mags or gun need to be spiced up a bit, take a look at what GunSkins has to offer. While I didn’t see anything that really struck my fancy, they might have something that is right up your alley. Each package of the magazine skins (enough to cover three mags) carries an MSRP of $24.99 and you can find more information about the wraps on their website here.

This post originally was run on The Firearm Blog - http://www.thefirearmblog.com/blog/2015/08/03/review-gunskins-ar-15-magazine-wraps/