The C4V coating also has some other claimed benefits past being good looking that we will get to later. 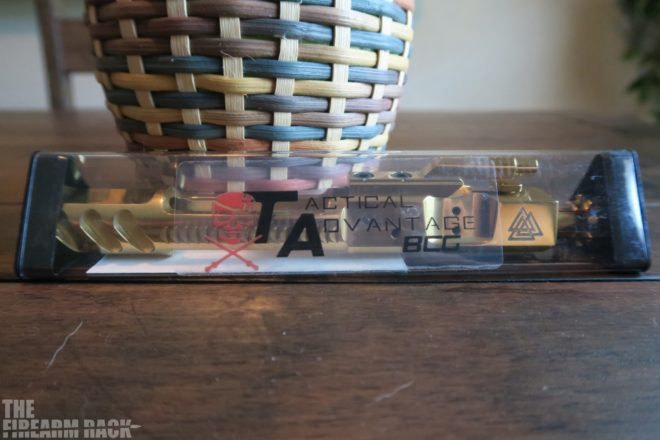 It wasn’t long after the initial email that the Tactical Advantage BCG showed up on my doorstep. After I had opened the package, I found the bolt carrier inside a substantial looking plastic tube. Once I pulled the bolt carrier out of the package I was blown away by how polished it was. I felt as though I was looking into a tiny gold mirror. The real question is if it works like it should on the range. It could look like a million dollars and not be worth squat if it fails. 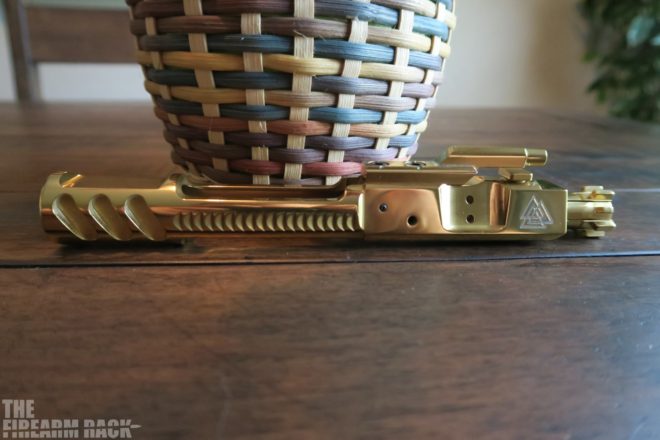 Everything looked great till I got to the gas key staking. Some of you well-versed rifle shooters will have run into issues due to poorly staked gas keys, many times those gas keys look just like the one on the Tactical Advantage. I was a bit concerned about the staking and decided to put an Allen wrench on them to see if there was any movement to be had. I was able to back both screws out without much effort at all. 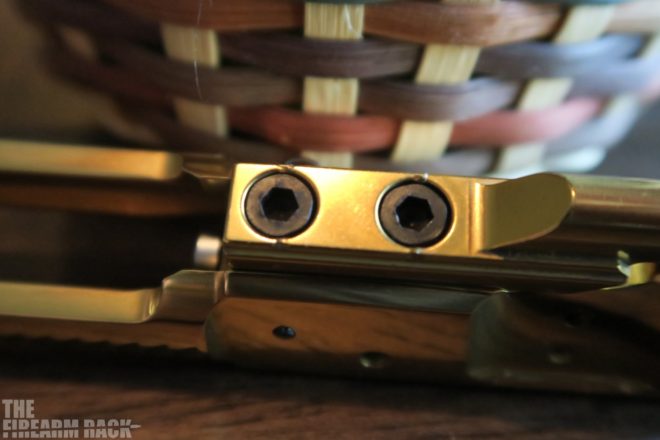 I asked them about the poor staking over the phone the Monday after I had gone to the range to test the bolt carrier and the answer I got was that they didn’t want to mess the finish up because I said I was going to take some nice photos. I just don’t see that as a valid excuse as to why a BCG left their facility with substandard staking. 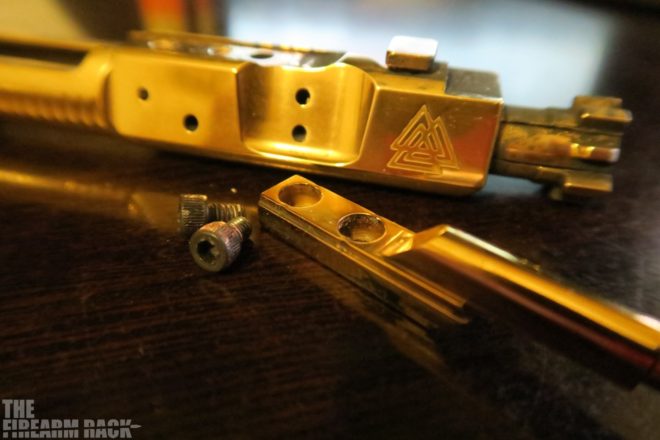 After a critical failure (I will go into the failure in detail later.) with the first bolt carrier group while at the range, I called Iron City Rifle Works and walked them through the issue and they agreed to send a second BCG out for testing. They asked I send the original BCG back so they could determine what was causing my rifle to double at random. They assured me that the second BCG would “have the crap staked out of it.” 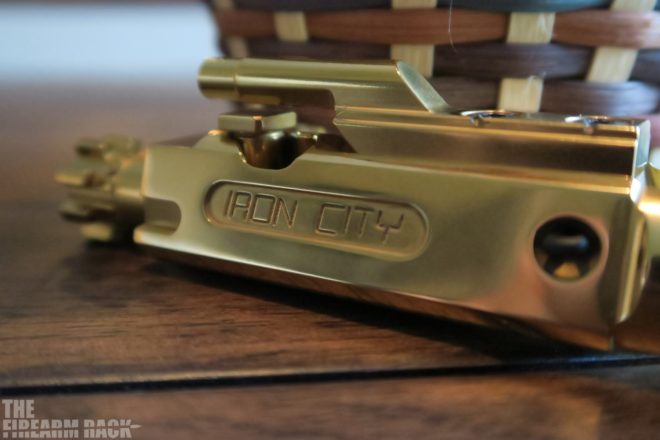 As I sit here writing this review, I pulled the second Iron City Rifle Works bolt carrier group out and took both screws out of the gas key without much effort at all. It appears that the gas key screws are slathered in Loctite, and the staking is a bit deeper than it was on the first BCG, but not by much. 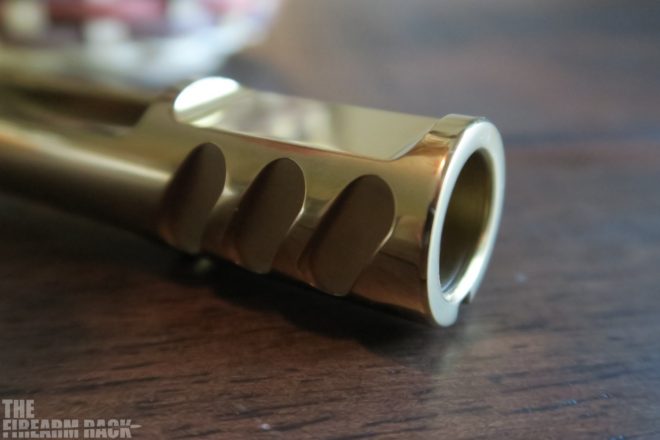 Looking over the rest of the BCG, the machine work is nothing short of breathtaking. Every surface is polished to a mirror and feels glass smooth. With a bit of your favorite lube, the Tactical Advantage glides like it is on ball bearings inside my upper. 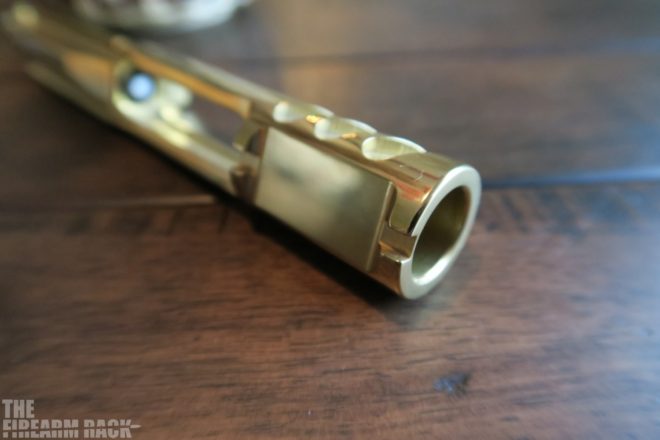 I would have preferred that the Iron City Rifle Works bolt carrier group wasn’t lightened on the tail of the carrier for ease of cleaning. It does look cool, but as a shooter that fits a suppressor onto his rifle 80% of the time, cleaning the insane amount of carbon buildup on my rifle parts is rather important to me. 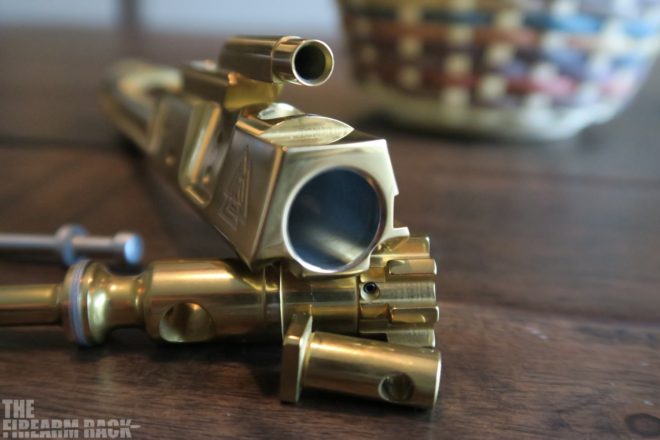 I think the bolt looks fantastic. Constructed of Carpenter 158 then polished. Iron City coats the bolt with the same C4V coating as they apply to the carrier and gas key. Again, the machine work is nothing short of beautiful. Looking the BCG over I wasn’t able to find a single machining mark. 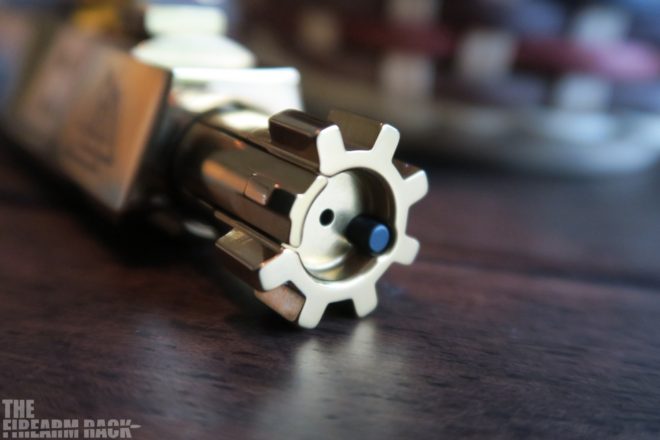 The rest of the bolt appears to be rather run of the mill; Iron City did see fit to include a Crane O-ring on the extractor spring to ensure positive extraction. The O-ring is an upgrade I run on just about all my rifles out of habit; I was quite pleased to see it included with the BCG from the factory. 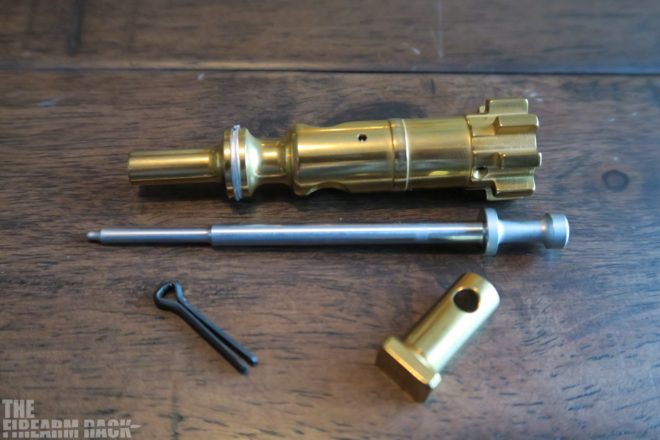 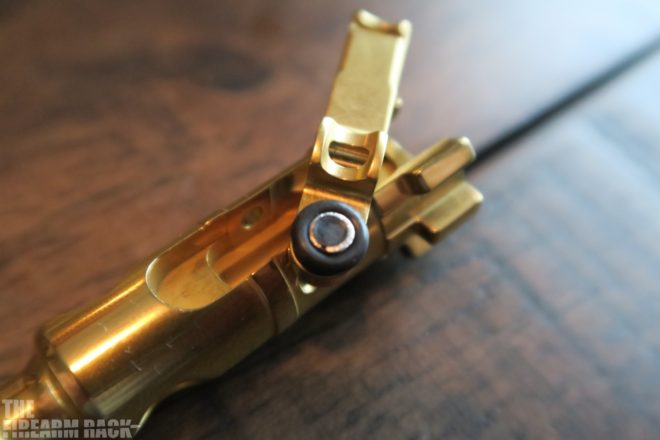 Once the BCG was in my 10.5″ test mule upper with a carbine gas system that I use for every single AR-15 product I test for the blog I had to stop a take a photo. The Iron City Rifle Works bolt carrier group looks amazing peaking through the ejection port, but will it run? 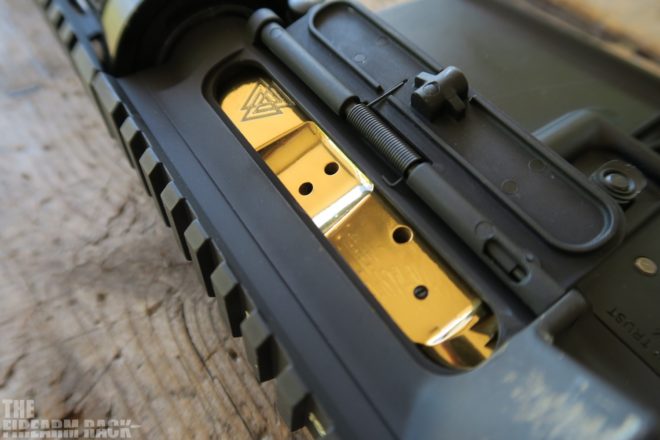 I loaded up four mags to their 30 round capacity and started by fitting my suppressor to see how easy it would be to clean the carbon off the BCG. Given the added gas blowback with my Saker on the end of the 10.5″ upper, I imagine it was about as much fouling that most shooters would see on a heavy range day. 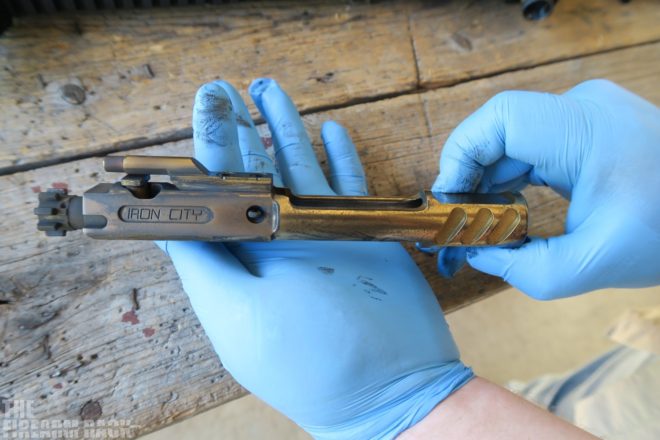 After firing two magazines with no issue under rapid fire, I slid the third one into the magazine well and closed the bolt. After 7-10 shots the upper slam fired twice for seemingly no reason. There was no chance that I had bump fired, the cyclic rate of the slam fired north of 1200 rounds per minute. After experiencing no less than three slam fires, I stopped the test immediately for safety reasons.

Below you can see the carbon buildup on the BCG and how easy it is wiped away from the TiN finish. If I were to spend some time doing a deep clean, I feel like getting it to a like new condition wouldn’t be too hard to accomplish. 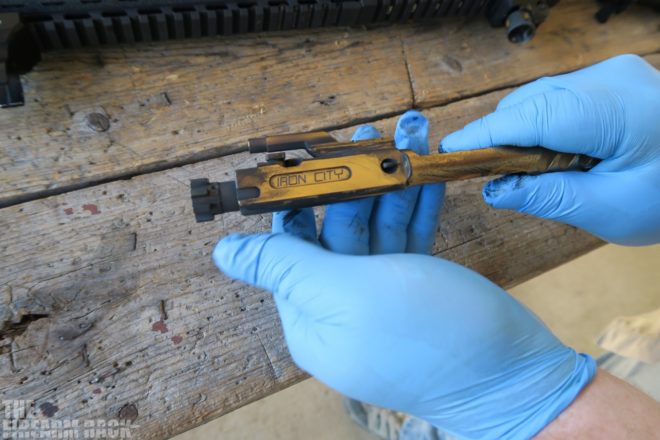 When I took the BCG apart, I noticed that the firing pin was sticking a bit inside the bolt. I was unable to determine why the rifle was slam firing, but an AR-15 armorer believes that there may be a burr or some sort of obstruction that caused the firing pin to stick. 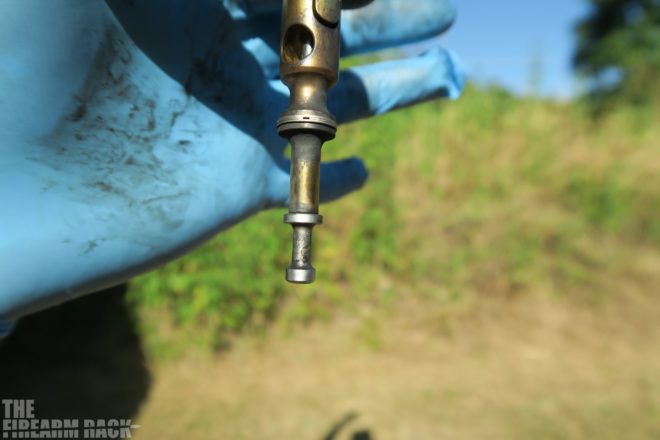 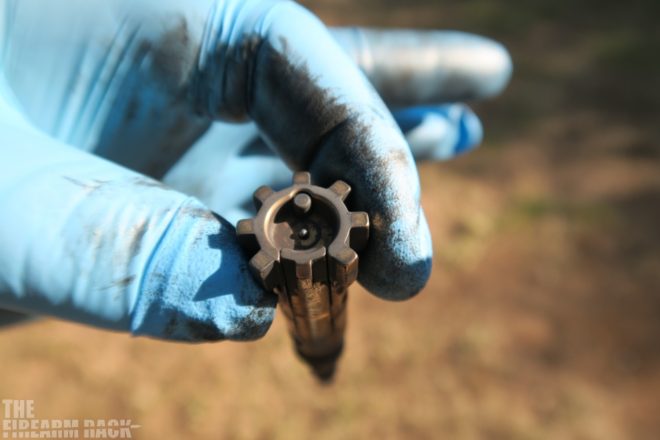 While shooting the replacement BCG that Iron City sent I attempted to recreate the failure before continuing with the evaluation. I was able to get the rifle to slam fire on video, pardon the crappy trigger work. After spending all day at the range testing products, my finger was getting pretty slow around the start of mag number 3.

Directly after this video was shot, I put the el cheapo BCG that normally lives in that upper in and dumped five mags into the berm with no signs of slam fires.

I have halted all testing of the Tactical Advantage BCG at this time and shipped both faulty bolt carrier groups back to Iron City Rifle Works due to safety concerns.

I will never come out and tell any of our readers that they shouldn’t buy something, that is for you to decide. I can only report on my findings and interject some light opinion now and again. As much as I want to break that rule this time, I think that the failures speak volumes.

Once a product fails in a dangerous manner we will halt the test and ask for a replacement. If the replacement fails, in the same manner, I consider that a failed test and stop the evaluation immediately.

If you want to learn more about the Tactical Advantage BCG from Iron City Rifle Works. MSRP, as tested, was $269.99.