As the size of the AR changes, so must its furniture. Magpul's K Grip was made to address this. Aimed towards PDWs and short guns, can the K Grip flex into more roles, or is it a one trick pony?

What Is The Magpul K Grip?

The K Grip is a shorter, smaller AR grip, with a 20-degree canted angle. With its subdued look, the K lacks the beavertail and width of many of Magpul's other offerings. Make no mistake, some amenities were sacrificed in favor of compactness.

A 20-degree grip angle is slated to help facilitate shooting with a shorter stocked AR. The trend towards more aggressively vertical grips has been upon us for a while, and the K was one of the first to market.

The K loses the storage compartment in the body of the grip. Many of the other Magpul grip offerings have this compartment, but it doesn't suit the intent of the K. This is a purpose designed grip, made to be lightweight (2.4 oz), and very thin (1 inch wide).

The beavertail is something that many shooters have grown accustomed to on their ARs, but the original A1/A2 grip didn't have it, and neither does the K.

Much like some of the other Magpul AR furniture, the K Grip is everything you need, and nothing you don't.

Where To Find The Magpul K Grip

The texturing on the K Grip is nearly perfect. The side strap checking is aggressive, but won't shred gear or clothes. The front and back straps are less aggressive, but still, offer a secure hold on the grip. Magpul calls their texture the "Trapezoidal Surface Projections", which makes it sound much cooler than "tiny nubs that grip good". As a long time HK shooter, this texture is very reminiscent of what the VP9 has on its frame. This is a very good thing.

The width of the pistol grip is very similar to a single stack carry 9mm, like a Glock 43 which I think it is a benefit. When we use the AR with an aggressive grip, we drive the gun from the front, not the back. For me, an overly large pistol grip does not enhance my ability to shoot quickly over a smaller grip. Another plus of the small size of the K is the ability to get more finger on the trigger. Although not recommended for doing long range precision shooting, getting more finger on the trigger will allow for faster follow up shots. For the close range nature of PDW's and other CQB oriented guns, this feature rocks.

The grip body's angle is aggressive, a more vertical grip angle. I love it. Whether on a short or long gun, the K feels very comfortable.

Now, the K does lack some of the features that are standard on other Magpul pistol grips, such as the internal compartment, and the beavertail. Do I mind that these are absent? Well, not really. I seldom store spare components in the compartments of my guns, and the beavertail is something that I have never really found an absolute need for. Despite all of that being said, Magpul does produce the K2 pistol grip, which is very similar to the K, but is a little bigger, and features the compartment and beavertail.

Would I Recommend The Magpul K Grip?

The Magpul K Grip has been my go-to pistol grip for a number of years. When not trying out other grips for the testing and evaluation process, my completed guns have K Grips attached. It's a no-frills grip that does what you want it to do, nothing more, nothing less. To draw a comparison, the K is very similar to vanilla ice cream. Both get the job done well, without leaving a bad taste in your mouth. Well, I love vanilla ice cream, and I love the Magpul K Grip.

Whether you have a short gun, or a longer one, I would highly recommend giving it a try.

The Magpul K Grip has an MSRP of $19.95 but can be found a bit cheaper at retailers like Brownells and Palmetto State Armory. 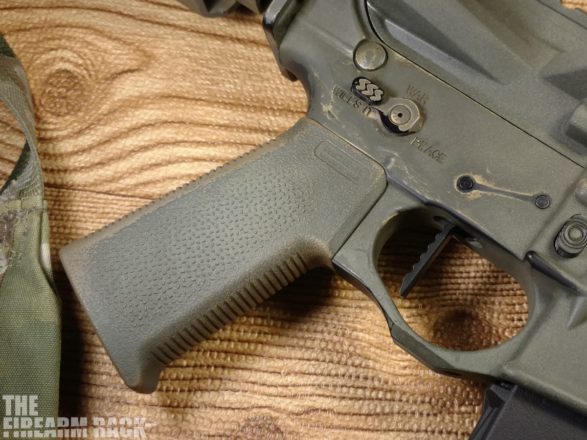 If you are looking for the "right" grip for your AR, maybe we've reviewed it!

The K Grip was purchased at the cost of the author.

Magpul is starting 2021 off with a boom. With over 10 new products released in the last week, there's something available for everyone. Check out [...]

What do white bread, vanilla ice cream, and the Magpul MOE stock all have in common? Well, they are all very, very basic. That's not [...]

There are a lot of options for shotgun furniture on the market. Some try too hard to be practical, and some don't try at all. [...]