I don't really get surprised by things very much. I'm (usually) fairly good at setting expectations for things, and gauging whether or not I'll meet them. Well, I was surprised by the Mossberg MC1sc, as it flew far past my expectations.

The MC1sc was announced earlier this month, but for many, SHOT 2019 was the first time for us to get our hands on the pistol. It is Mossberg's first pistol on the market in a hundred years. Getting into the single stack 9mm carry gun game is a "safe" choice, but this pistol is different. Based on my experience handling and shooting it, I think that it's gonna hit the market hard.

The gun had a lot of thought put into the things that I personally care about. The grip texturing is aggressive, but won't grab clothing, or tear up your hands. The slide serrations are unique looking, but do an excellent job at giving a good purchase on the slide. The forward slide serrations actually work, despite the slide being small. A flat faced trigger is standard on the MC1sc, and it is fantastic for a factory carry gun trigger. The sights, (both standard and tritium), are three dot, use a common SIG dovetail cut, and are metal!

The gun comes with a six round flush fitting magazine, and a seven round pinkie extension magazine. Both magazines are clear, and look a lot like Glock 43 mags. Well, one of the big features of the MC1sc is that Glock 43 mags function in it. That is massively awesome.

There are a few versions of the MC1sc hitting the market, the variations being differences in sights, (standard or tritium), safeties, and laser equipped models. The manual safety model is the weirdest thing about the gun, as it is a crossbolt style safety. 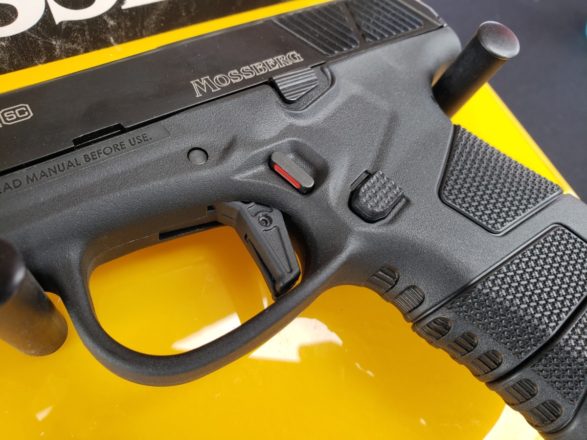 The oddball crossbolt safety on the manual safety MC1sc.

I put two magazines through the MC1sc at Range Day, and I was very surprised. The great sights and crisp trigger made follow up shots fast, and recoil was quite light for a CCW piece.

These are merely my first impressions with the MC1sc, not any sort of review. If Mossberg can make and ship the pistols, I think that they will be a hit, as long as there are no production hiccups. 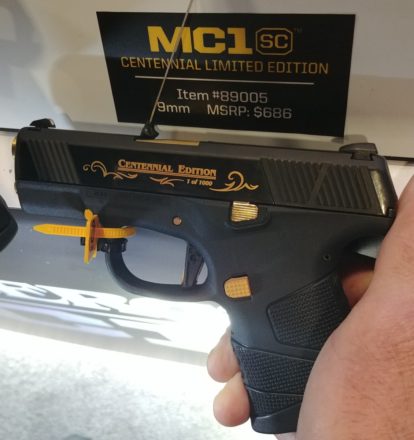