In a rather uncomfortable, salty feeling video, Reid Henrichs bans modified guns in future Valor Ridge courses. The change in policy undoubtedly is a result of Reid witnessing several failures while teaching that have either held up the class or caused a safety issue. I get his frustrations but don't necessarily agree with the approach he has taken.

The comments section on the YouTube is predictably full of people ripping Reid apart for the new standards as well as the typical fanboys defending the decision. Reid does backpedal in the comments a bit by saying that aftermarket rails on rifles are perfectly fine as well as aftermarket sights and stippling on pistols, no mention of swapping stocks on a rifle or adding a larger mag release. Bizarre.

Some Drama In The Comments

Predictably there was some drama in the comments where The Patriot Nurse stepped up to defend her man. Need proof that they have more than a professional interest in each other? First, read the comments that have since been deleted, then take a look at the screenshot from her Facebook page or listen to the comments in an interview with Hank Strange. 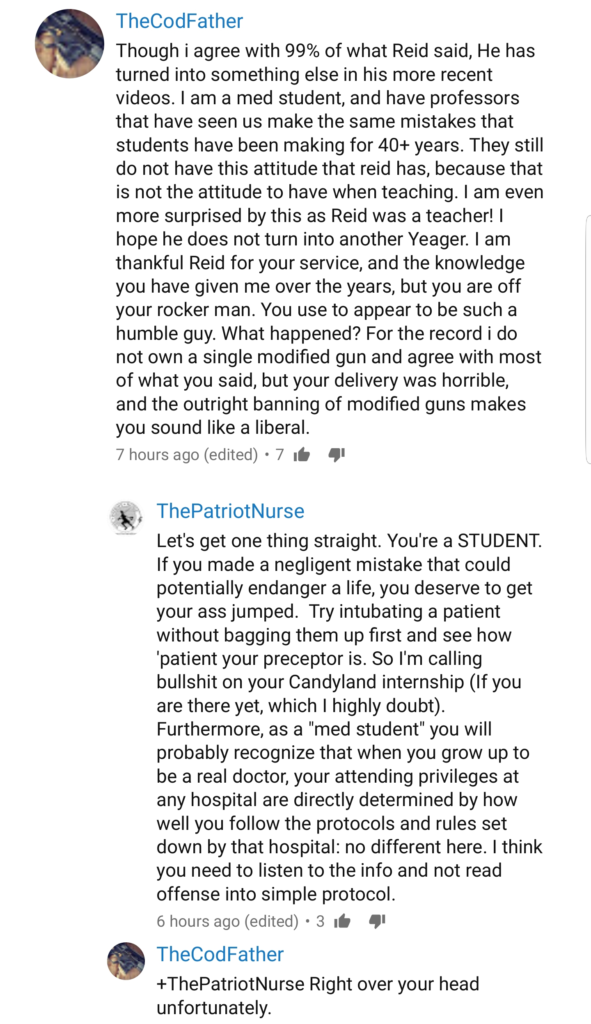 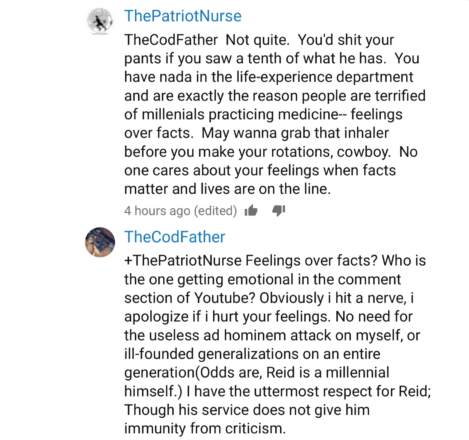 I am in no way chastising them for being together, I personally don't care. What I am saying is that attacking someone that frankly had some coherent points because you have a romantic interest in the guy is a bit unprofessional. I understand why the comments were deleted, but let's be honest, the internet really doesn't forget. 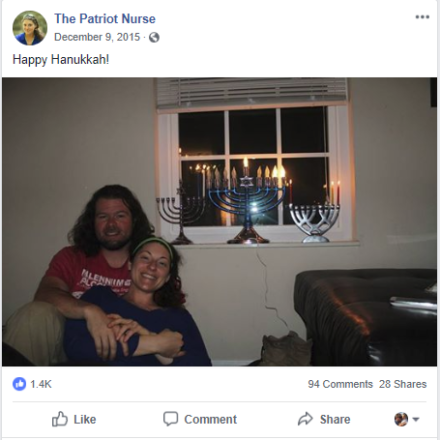 Again, I am pleased that both The Patriot Nurse and Reid are happy, just don't let your love life drive decisions that alter your professional appearance.

What I Agree With

There are some things that I agree with like buying a factory gun if you are attending a class as well we bringing a spare. Things happen, parts break. If you have another gun on hand to switch out for the malfunctioning one, you are going to get more out of your class.

With the current culture of "it's just as good as" that runs rampant with gun owners or the "you are just paying for a name" line you hear far too often, I imagine that Reid and other instructors would love to keep parts bin specials and kit guns off the line. As always, there are exceptions.

I get the no reloads rule, I really do. I am a firm believer that if one is taking a class that you should drop the coin on good, quality factory ammo when you are dropping hundreds on a class.

Another point that I agree with is the electronic hearing protection. Being able to hear commands easily is essential.

Some Of The Things I Don't Agree With

The requirement that firearms are untouched from the factory is something that is a bit heavy handed. There are a ton of well-vetted upgrades out there that make sense depending on a shooter's skill level. I don't see why drop-in triggers like a Geissele, ALG Defense, or other duty ready triggers wouldn't be allowed. What about proven aftermarket pistol slides like Jager Werks, Ed Brown, KE Arms or even the surprisingly good Brownells slides? According to Reid, even a Glock with a TangoDown Vickers slide stop or even the addition of a factory Glock extended slide stop would not be allowed in his classes.

If the parts are fitted by a competent gunsmith, I just don't see what the issue is. Besides, if the student's gun goes down, why not just pull them off the line instead of holding the class up?

Reid's holster requirements are a bit off in my opinion. If he is stating that well-vetted add-ons are verboten, why in the hell are leather holsters allowed? They have been proven to be less optimal than Kydex holsters, why not require a holster made from modern materials?

I am sure leather holsters exist on the market that would perform fine, but why not step into the 21st century and remove a potential failure point when the class will require drawing and reholstering a hot firearm several times? While we are at it, why isn't he forbidding the use of hybrid holsters?

Shouldn't safety be the first concern?

I feel that if Reid had a spare setup on hand like other instructors in the industry it wouldn't be a big deal. Every other instructor out there has to deal with the same issues and near none of them require stock firearms.

The statement that "we will be checking" seems a bit like he is corralling children rather than training armed citizens. When Daniel R wrote up his experience from the Valor Ridge Pistolcraft I class, he mentioned that Reid has a habit of going off on tangents. Maybe a more focused approach to the classroom material might leave time to buddy up and do a once-over of their partner's gear?

Reid is teaching adults that should have the forethought to confirm their equipment is working before stepping foot onto a range where they have paid hundreds of dollars to be there. The responsibility is on the student, but the instructor might do well to have a box stock Glock 17 and a Colt 6920 or even a Bravo Company rifle on hand should a student's gun go down.

What do you think? You can watch Reid's video below and drop your opinion in the comments.