In recent years .22 trainers like the Smith and Wesson M&P 15-22, the Colt M4 .22, or the HK 416 .22 have taken a bit of focus away from the ever popular Ruger 10/22. I have a strong feeling that has a lot to do with the Ruger looking more like a hunting rifle and the AR pattern rifles being more in line with what many newer shooters are familiar with. The Ravenwood RW-AR22 stock puts a bit of that focus back on forgotten rifles by allowing shooters to transform their otherwise normal looking 10/22 into an almost AR like rifle.

When the Ravenwood stock showed u Ravenwood RW-AR2p I pulled a brand new 10/22 with a fancy lasermax from my inventory to dress up. I cleared the dining table off and got to work installing the otherwise unassuming stock 10/22 into the RW-AR22 (A mouthful if I do say so) stock. I decided to lay everything out to really take in what was involved. 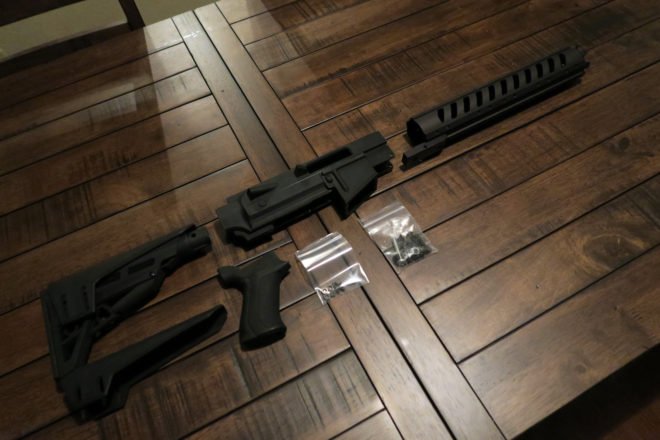 The receiver is a molded part with faux AR-15 controls. I found that out of habit I tried to take the rifle off of safe with the molded safety once as did my father when he picked it up. 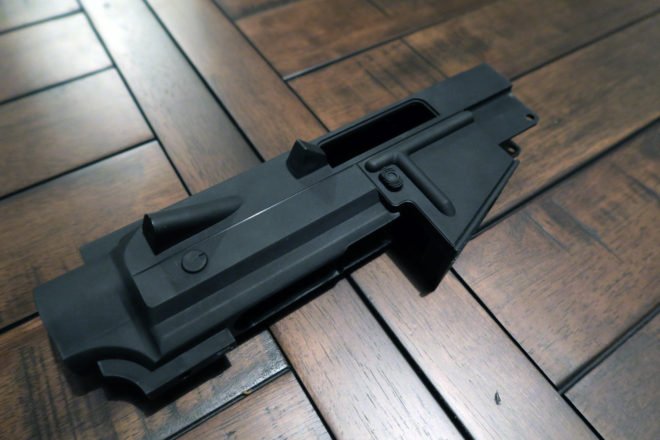 Here you can see where the 10/22’s receiver will lay, the Ravenwood stock relies on a tight fit inside the clamshell to keep everything in line. I was a bit concerned about the rifle retaining zero but was very pleased when we saw no degradation in accuracy after zeroing then jostling the gun around a bit. 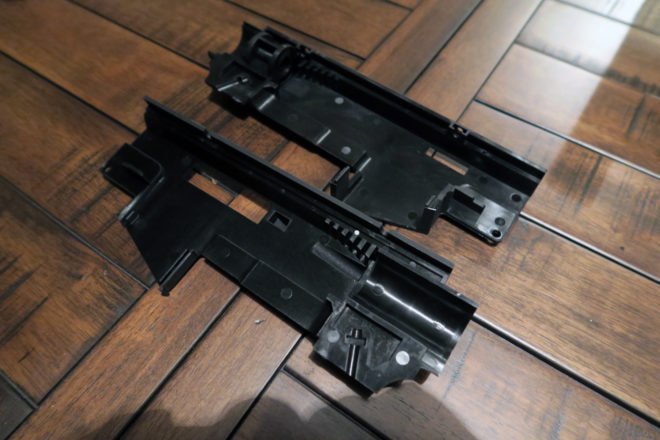 The handguard features an ATI style “nosecone”, after installing the rifle I thought it looked much better with it than without as a result of the rifle’s thin barrel. With a .920″ barrel I am fairly sure that you would need to remove the nosecone. 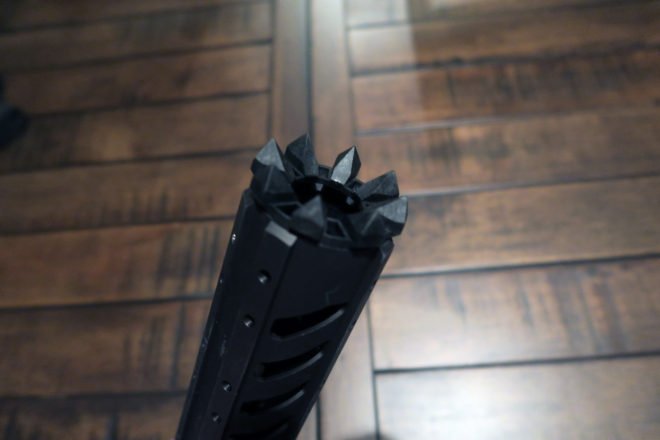 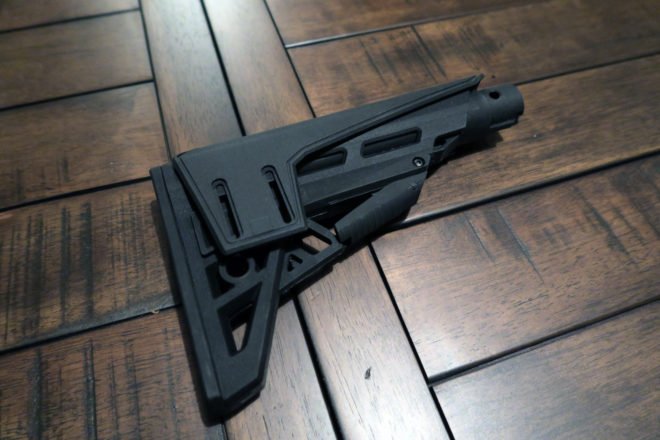 The pistol grip has a recoil reducing style cushion on the back of the grip. Putting the grip on is kind of a pain and I was a bit afraid of breaking something as a result of the amount of pressure I had to put on the plastic clamshell receiver. 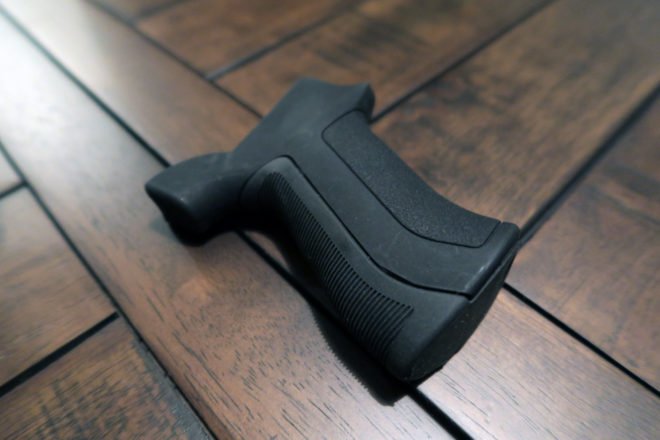 Like I said I decided to pull a brand new 10/22 out to install into the stock. While there is nothing wrong with the stock 10/22 the Ravenwood stock looked as though it could be fun to shoot. 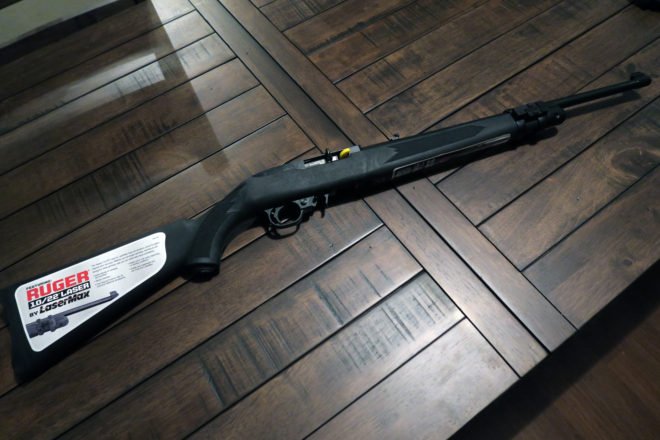 Below is all that is retained from the factory rifle. I started taking photos of the install process but it proved to be a bit difficult with only 2 hands. 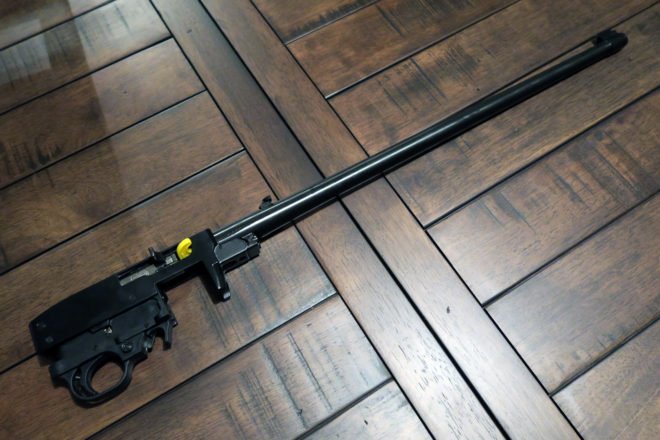 Several steps later I had a complete rifle again. Changing the magazine on the complete rifle reminds me a lot of of the CMMG Mutant rifles that I have had the pleasure to shoot. The cross-bolt safety did throw me for a loop once … or twice. 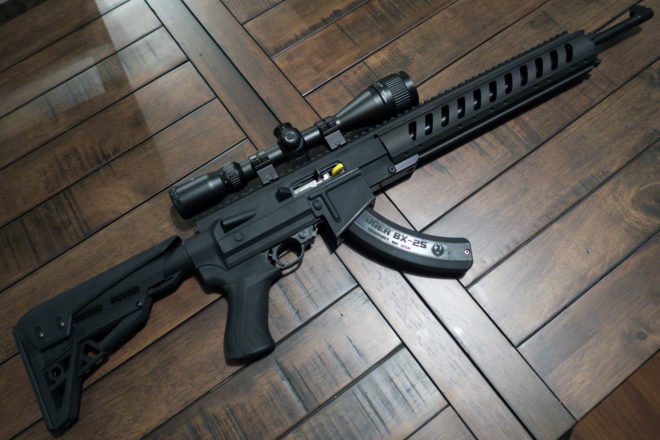 Out at the range, I was able to sight the rifle in rather quickly. It did look a lot tacti-cooler than it did in the factory stock. The full-length rail allows you to mount just about anything you want to it really allowing you a wide range of back up iron sights and optics to be used. 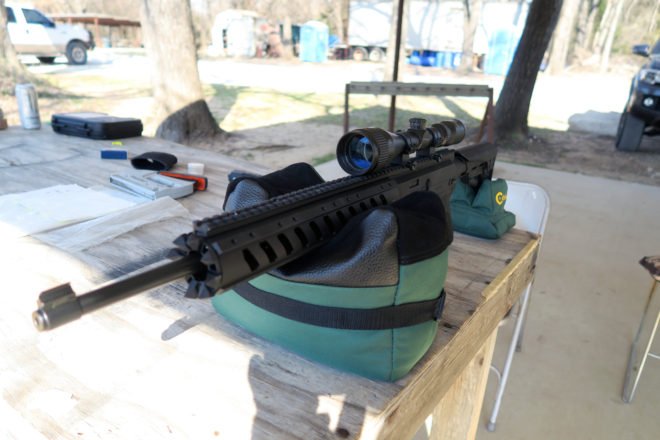 The faux selector was a bit deceiving for someone that normally shoots an AR variant of some type.  The clamshell receiver even has a bolt stop and magazine catch. 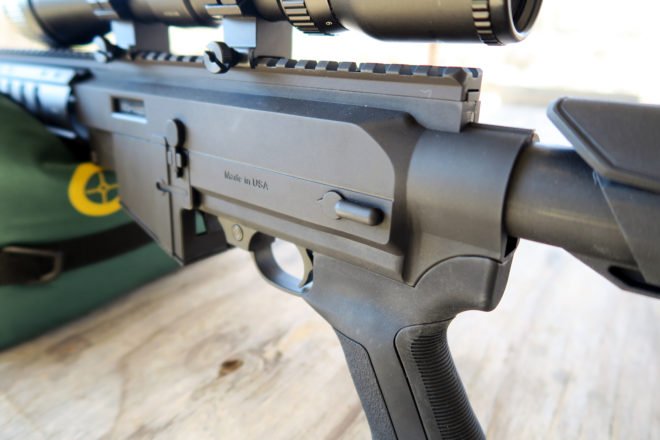 The low profile cheek riser was more than enough for how low I mounted the scope. The kit did come with a taller one if you decide that you need more height. 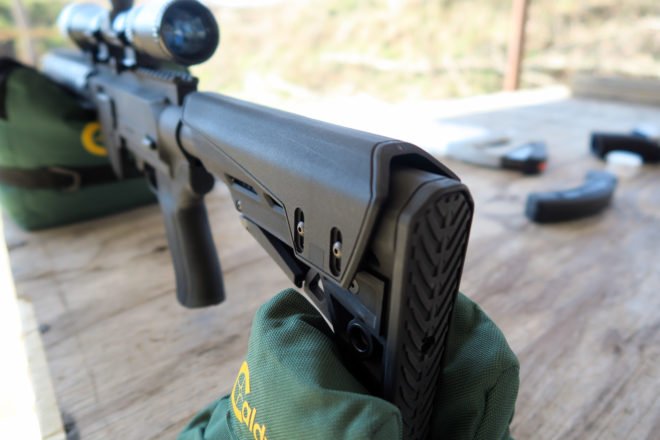 The clamshell even has a molded-in brass deflector and a faux forward assist as well as a faux AR style mag button.  The molded magazine well prevents shooters from using the flush fit style of magazine that the 10/22 ships with. Not that big of a deal since if you are outfitting your 10/22 rifle with this stock you are most likely going to be using a larger magazine. 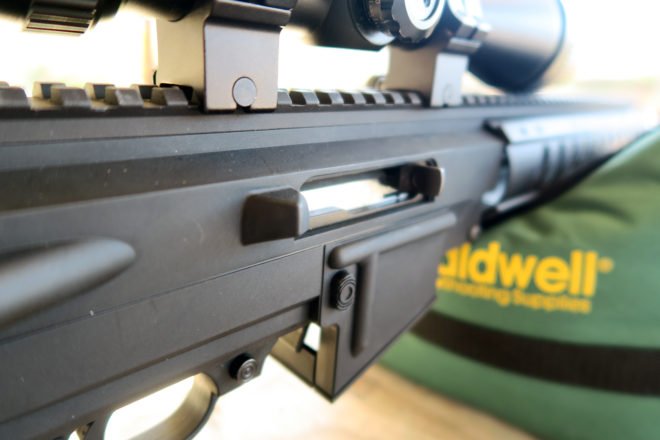 I shot a quick 10 round group at 25 yards and found that the Ravenwood stock did not allow the 10/22 receiver to shift under recoil. I was able to turn out a respectable group for a factory 10/22 barrel and trigger. You can see my two shot zeroing groups on the other 4 visible bulls-eyes. 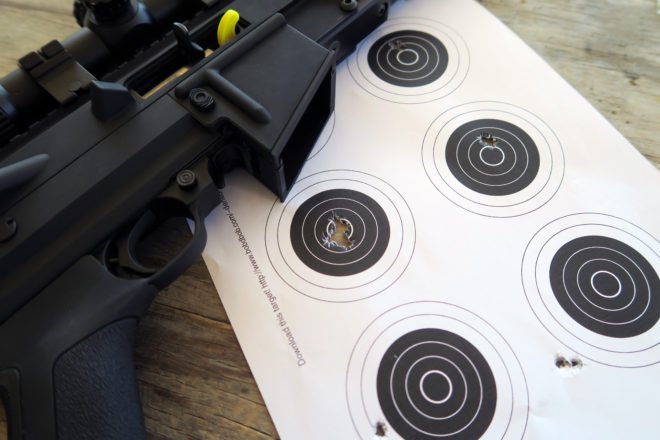 Time to have some fun shooting the steel! I rather enjoyed shooting the Ravenwood stocked 10/22 but was reminded often that it was not a real AR style trainer. The rifle did function flawlessly throughout our range trip. 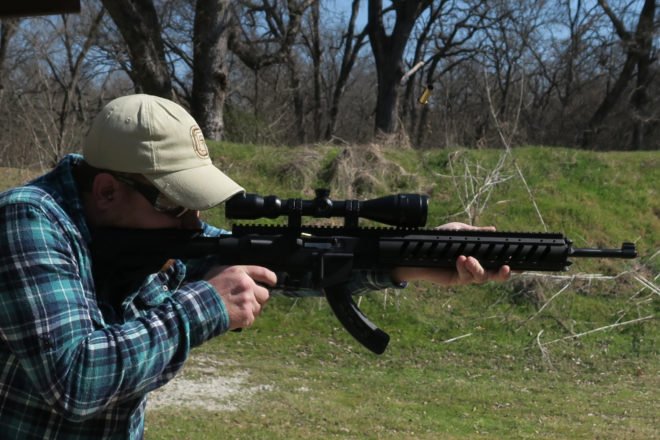 I gave my father the rifle and told him to go nuts on the steel torso. He was drilling the hostage swinger shot after shot and having a blast. I had a rather hard time prying the rifle from him at the end of the day, he was sold on the stock needless to say. 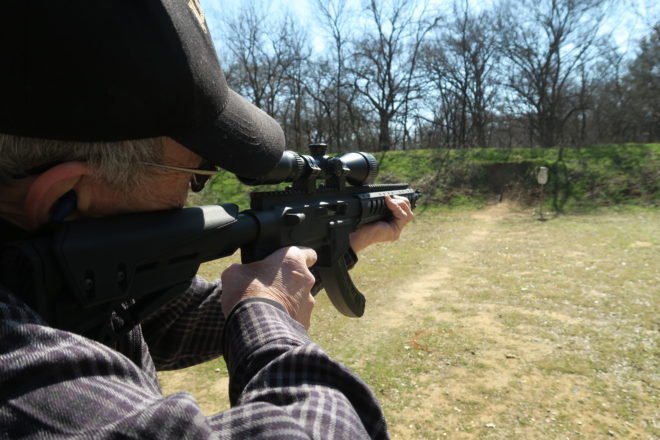 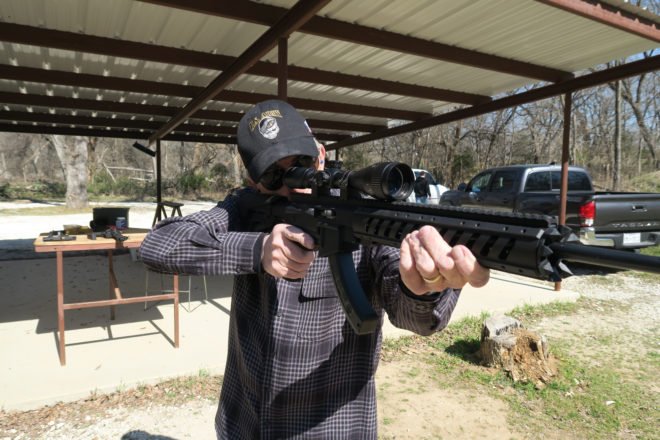 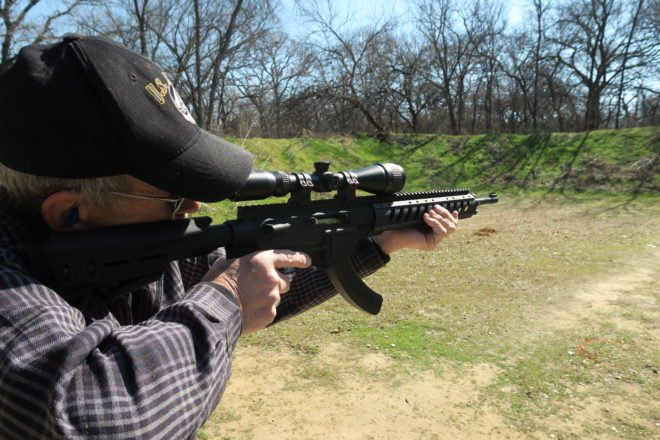 Something of note that I didn’t think about till I got home after the range and was cleaning everything up was that you have to totally disassemble the chassis to clean the rifle. There is no way to get to the trigger pack pins or the inside of the receiver without removing it totally, that means taking the entire thing apart as a result of how the Ravenwood stock is put together. Another thing of note that I mentioned earlier is that the stock will only accept “banana” style magazines because of the plastic clamshell’s magazine well.

If it wasn’t for the cleaning issue I would say that the stock is a home run, but if taking it apart to clean it isn’t a deal breaker for you than the RW-AR22 might be something that you should look into. It is far cheaper than another gun with an MSRP of $179.99. You can learn more about the Ravenwood RW-AR22 stock at Ravenwood International’s website here.