In the book Stalked and Defenseless by Nikki Goeser, we get a glaring example of the dangers gun laws can cause. Nikki’s husband Ben was murdered at a restaurant by a man who had been stalking her. She is a concealed carry permit holder, but laws at the time forbid any guns in places that served alcohol. She shares her experience as a form of advocacy for more gun owner rights.

The book starts out recounting the events leading up to, and including, the day Nikki’s husband was murdered. It’s a frightening tale for anyone, especially women who are more prone to having violent stalkers. It goes on to cover what happened after the murder and how Nikki responds. She recounts stories of the legal battle as well as her extensive advocacy work. The first three and a half chapters are heart wrenching as she tells the tale of her husband’s final few hours. It is a difficult book to read, as you can feel her raw emotions even after all these years.

Things go a little off the rails in the second half of chapter 4. Up until this point the focus has been on Nikki and Ben, and the events surrounding their tragic story. However, almost out of the blue, chapter 4 switches gears and we are overloaded with statistics. I would bet the section was written by someone else and inserted as it doesn’t seem to match the voice of the rest of the book.

The information provided initially is interesting and mostly relevant. But then for some reason the book starts comparing US gun death numbers to Europe’s. In fact, the last 4 pages are just a list of gun incidents in Europe. I confess I read the first couple then skipped to the end of the chapter. Gun control advocates in the US could give a flying f*ck about gun incidents in other countries so I’m not sure of the goal of this section. 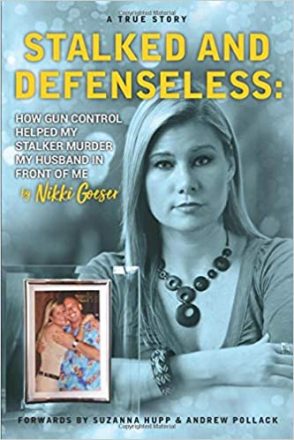 Birth of an Advocate

Often times people become advocates because of some tragedy they experience. Many women specifically become gun owners after being stalked. I don’t want to give away too much, but Nikki talks about her attempts to get laws changed and how the support came from Democrats in the State Legislature more so than Republicans. She states that she realized “this is not a partisan issue”. It’s a strong statement and one all gun rights advocates would do well to keep in mind.

The final chapters of Stalked and Defenseless cover the trial and are hard to read. Not for anything technical, but because the miscarriage of justice is painful. The prosecution clearly had a bias against gun owners and let their personal feelings impact their work. Sadly, this will likely impact Nikki’s safety at a future date.

Despite the promising start to Chapter 5, the book quickly dissolves into the tired “Democrats are evil” and it’s all their fault trope. As 2A advocates we do ourselves a disservice trying to make this a D vs. R issue. If I learned nothing else in my years as an advocate, it is that insulting, denigration, and generalizing any group of people will not bring them to your way of thinking.

A Note on Editing

The editing gets a little sketchy as you move through the book. Simple mistakes go uncorrected in several sections. One place says gin instead of gun (the auto-correct on my phone does that often, very annoying!). There are also extra spaces, words that obviously should have been deleted, and even a few incomplete thoughts.

The formatting of the book is off as well. The text is pushed up against the top of the page leaving large white spaces at the bottom. While not a huge issue, it does distract from reading. Hopefully later printings are corrected. Important advice for authors; if you are going to self-publish, always order a copy yourself before making it public to check for these types of issues.

Final Thoughts on Stalked and Defenseless

While the writing is jerky at times, the overriding story of Stalked and Defenseless is compelling. It’s a quick read at just 135 pages, and I finished it in one evening. The font is large and there are several pictures and charts. I applaud Mrs. Goeser for her passion, but feel once her personal story was told, the book fell into a preachy tone that was a little off-putting. If her goal was to entice 2A fence sitters to the pro side, her story may have better been told as an article instead of a book. It felt like they were reaching to find enough words to fill what is already a short book. Despite that, the book is definitely worth reading. Her story is a strong example of the importance of conceal carry and the first 3 chapters will break your heart.

You can get a copy of Stalked and Defenseless here