Strike Industries is known for their budget friendly parts and accessories for both pistols and carbines. When searching for new magazine extension to test, theirs left me intrigued, both from its construction materials, and its mounting solution. Curious to see how it stacked up against the competition, I picked up one of my own to put it through the wringer.

Mounting the Strike Industries extension is fairly simple, but requires the use of tools. First disassemble your OEM magazine and swap your follower onto the included Strike spring. Reinsert the magazine spring, and slide the extension onto the magazine body. Next, slide the L shaped locking plate into position, with the hook portion of the plate facing the magazine. Once in place, tighten the set screw into the magazine to ensure the security of the locking plate.

Coming in at just 3.4 ounces when mounted to a Glock 17 magazine. This light weight is certainly noticeable on the belt and in the gun, especially when compared to something like a Dawson Precision extension. Due to this light weight the magazine occasionally fails to drop freely if orienting the gun horizontal to a significant degree during reloads. I don't count this against the Strike Industries extension, as that can be easily fixed with a tweak to technique, which should be done in the first place.

Strike Industries claims that this extension will fit an additional 6 rounds of 9mm in a standard Glock magazine. This has not been my experience. Throughout testing I've been able to fit an extra 5 rounds of 9mm before reaching maximum capacity. This keeps the extension on par with virtually every other competitor I've used who makes similar claims.

The Strike Industries magazine extension is visually tame. Made entirely from polymer, the extension features a matte finish and smooth texturing all around, with some slight indentions on the sides. A small, stylized "SI" is pressed into the front of the extension so everyone knows who you're repping. The top edges of the extension feature little to no beveling to aid with magwell compatibility, though the relatively thin polymer likely helps in this capacity.

Before being trusted on my belt all magazine extensions endure a drop test. Parameters are simple. Each magazine is fully loaded, then dropped five times onto concrete from shoulder height. Mags are dropped straight down onto the extension as though falling from a firing pistol. The first drop went off without a hitch. On my second drop, the extension pops off the magazine, and the OEM follower snaps in half. I grab a new follower from a different magazine and reattach the extension. Third, fourth, and fifth drops go on with no problems and no significant damage done to the extension. 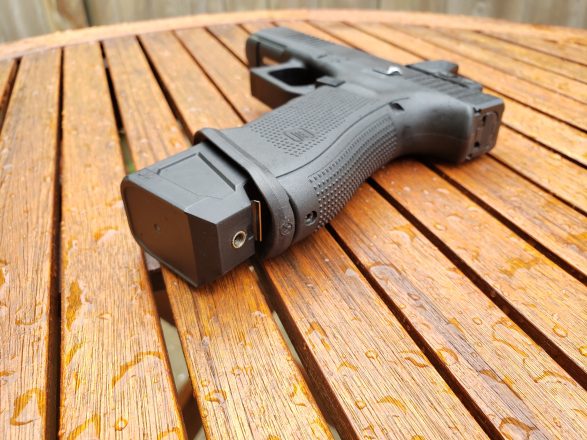 Roughly 1,200 rounds have been cycled through this magazine between classes and regular range time. It has seen rain, blowing dust, and blazing sun. So far I have encountered no problems during shooting that I can directly attribute to this magazine or the extension. However, I do have some administrative complaints. For the past several months I have begun noticing weakness in the magazine spring. This is leading to failures to lift rounds when manually unloading the magazine, as well as incorrect reading of the witness holes when counting ammunition. While there is currently no impact to function during firing, I am concerned that this may change.

Of note, when reattaching the extension, I accidentally put the locking tab in backwards, which should reduce the security of the extension. However, this has proven to not be a problem over the past year of testing. However, the locking plate does rattle slightly in this position, though that wouldn't be a factor for those mounting it correctly.

The Strike Industries magazine extension has completely outperformed my expectations. Initially I expected this to quickly break due to the thin nature of the plastic body. Even more impressive is the extension's continued security despite the incorrectly configured locking plate, which is entirely user error. While I have hesitations regarding the longevity of the magazine spring, this seems to be a solid option for training and competition.

MSRP on the Strike Industries Glock magazine extension is $19.99. You can get yours from Brownells >>HERE<<

It appears that the Sootch00 Glock 43X review was published ahead of the January 2nd date by mistake. While this sucks for Sootch, it does [...]

It shouldn't come as a surprise that the US Secret Service choose Glock 19 & Glock 47 pistols after CBP adopted the same guns back [...]

ZEV Technologies are known for their higher end firearms, parts, and accessories. With a distinct visual flare, ZEV gear is hard to miss on shelves [...]