Introduction to Reactive Shooting is described as the functional equivalent of Day 1 of the Rogers Shooting School.  As the former lead instructor for that famous school, Ronnie Dodd would know.  He has his own training company and his own Rogers Range on his property.  Recently, I was invited to attend a private class with with some others I train with.

Ronnie Dodd is the former lead instructor for the famed Rogers Shooting School.  He has his own company, Dodd Training and Associates.  In addition to being a nationally-ranked competitive shooter, Dodd is a retired career law enforcement officer and held positions from patrol to chief of police.  Through his training business, Dodd trained newly-stood-up police forces in failed states such as Kosovo and Iraq.  He has instructed tens of thousands of shooters over his career and continues to instruct at his home range. 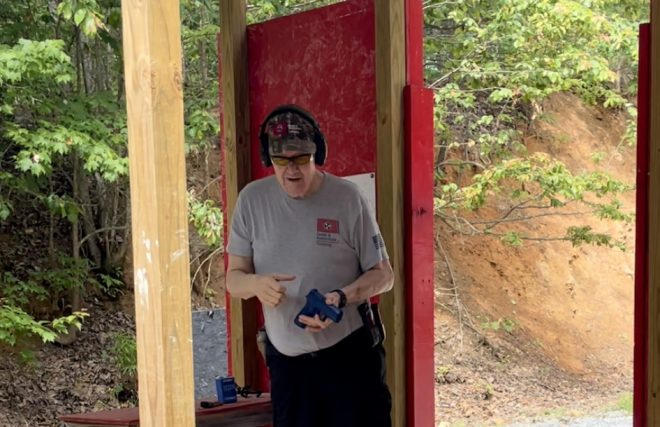 Bill Rogers has a concept he calls reactive shooting.  He has found that humans can react to a stimulus in a quarter of a second.  Seeing a target is one reaction; obtaining a sight picture is another.  This means that, for example, students are given .25 seconds to see a target and move to it.  They are provided with another .25 seconds to react to their sight picture and fire.  In English, this means that in Rogers' world you have a half second to see a target, come up from ready, and fire.

The drills have a bit of math to them.  Students are expected to deliver shots in .25 seconds to the body with a .5 second transition.  So, for example, a failure drill should be done in 1.25 seconds: .5 seconds to come up from low ready, .25 second splits for the body shots, and .5 seconds for the headshot.  This sounds easily attainable, but in practice it's a lot harder.

What is a Rogers Range

A Rogers Range has no paper targets.  It is a series of pneumatically-driven six-inch steel plates.  A computer controls their appearance and disappearance.  The computer has the ability to randomize their exposure.

The Rogers Range forces students to complete the drill in the time they have.  Much like real life, a Rogers target simply disappears when your time is up.  If you didn't transition to it in time, you either no longer have the shot or you send a round somewhere it didn't need to go.  There's no allowance for shots over par.  On a Rogers Range, no target is exposed for longer than .75 seconds, and the vast majority are half second exposures.  That gets difficult quickly once you start dealing with multiple targets.

Real people typically do not walk around with bullseyes on their chest and head.  Mr. Dodd encouraged us to pick a spot on a target and shoot that spot, rather than shooting center of mass.  To help us, the body targets had a 2" red dot in the high chest area.  To translate this concept to real life, he went around the class describing where specifically on each student he would shoot them: the right eyebrow, the neckline of a polo shirt, the letter R on a Black Rifle Coffee Co. shirt, etc.  I had heard this same concept explained by Steve Fisher, though I don't recall if he called it spot shooting.

As Mr. Dodd explained, the reasoning behind this is that students do not fire particularly accurately when they're told to "just shoot the middle."  In particular, multiple shot strings are wildly inconsistent.  When the shooter picks a spot and keeps shooting it, the shots cluster in that area.  This is extremely important with pistols, given that they simply poke holes in things.  Lots of holes between the nipples is a better outcome than lots of holes dispersed all over the torso.

The Rogers Range also forces you to react off a visual stimulus.  Most competitive sports and shooting classes have students work off a timer.  As I learned in John Murphy's Concealed Carry: Street Encounters and Tactics, you're going to be slower when you react off a visual stimulus.  When testing, I learned that I can react to a timer in about .2 seconds; processing a change in color and reacting took about .35-.4 seconds.  Every other student showed a similar lag time.

That experience held true at the Rogers Range.  Shooting a 6" plate at 17 yards is fairly easy.  Reacting to that target it and hitting it when it disappears .5-.75 seconds after exposure is far harder.

Follow through is emphasized heavily: often times, students going full Ricky Bobby miss the plate.  Students often found they had time to follow through and make a second shot if they stuck with it.  Shooters should always be prepared and able to fire a second shot.  In real life, you simply do not know if the shot you just took will be all that is required.  Dodd suggested counting to one-one-thousand to mentally force yourself to follow through.

The class follows a walk-crawl-run approach.  Students start out reacting to a single close plate in half a second to get used to the concept of working within the time you have.  This progresses to multiple shots to the body, delivered with .25 second splits.  Transitions are added: failure drills to start, then transitioning between two targets, then transitioning between targets and performing failure drills on each.  The time standards are rigid, even though there is no timer: the student only has the amount of time the target allows.

As we moved on, we shot stages with multiple targets appearing.  On one, up to four would appear; students were required to shoot them near-to-far, which required additional mental processing.  In another, one known plate would appear followed by an additional random plate.  To succeed here, your shooting must be somewhat subconscious.  You simply don't have the time to think about working the gun because your brain is too busy figuring out what to shoot and when.

We capped the class off with a drill called the Blast Drill.  The description from Mr. Dodd: "a whole s***-pot full of curry."  The drill involved 42 exposures; the targets would appear at random and simultaneously.  One target would appear, and then two more would expose themselves while the first was still up, and then a fourth and then a fifth.  Go too slow and you wouldn't have an opportunity to engage.  A miss meant you could either follow through and take that target or move on to the next; either way, you weren't going to hit one of them.  The target system -- much like real life -- will not stop and wait for you to catch up.

I found the class to be well worth my time.  It's rare that I get to shoot something other than a stationary target, nevermind a random series of targets under time pressure.  While a single day with Ronnie Dodd isn't the same as five days at Rogers, I still saw improvement in my automaticity as the day went on.  Plus, it was a load of fun.  If you get the opportunity to try a Rogers Range, do it.

You can get training with Ronnie Dodd on his website >>HERE<<

In the midst of the COVID-19 pandemic, solid training is hard to come by. Classes are being canceled and rescheduled nearly every day, with no [...]

Author’s note: This After Action Report/review is not all-inclusive. I want to give readers an idea of what to expect from not only Technical Handgun, [...]