Surefire's update to the EB2 Backup light is a fairly recent addition to their lineup, but it brings a lot to the table. It's a lightweight, high output light, with some features that really differentiate it on the market. How does it stand up to months of use, and have I run into any problems with mine?

The EDCL2-T is a handheld, everyday carry flashlight made by Surefire. It runs on two CR123A lithium batteries and has two modes, a high 1200 lumen mode, and a low 5-lumen mode. At high mode, the EDCL2-T is pushing out a massive 24,000 candela, which is pretty impressive, considering the size of the light. Battery life is a little over an hour. The EDCL2-T weighs a measly 4.10 ounces and is about 5 3/4 inches long. The flashlight ships with two Surefire CR123A's, and comes with a pocket clip, (which I promptly removed).

One of the neat things about the EDCL2-T is the tail cap. The tail cap, affectionately known as the "gas pedal" is a push for momentary on, and rotate for constant on tail cap, like many other Surefires. However, a half push of the cap activates the 5-lumen mode, and a full push does the 1200 lumen mode. Personally, I hate having too many buttons on lights, so I dig the tail cap. It is responsive, and there is no noticeable lag moving from the 5 to 1200 lumen modes. 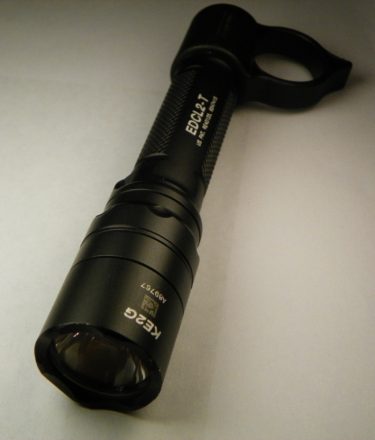 The light is great for carrying. It is thin, barring the larger head. It has never been a bother in the pocket, especially when compared to Surefire's other offerings, like the 6PX series. My biggest gripe with the EDCL2-T is the pocket clip. The clip itself is durable but is mounted in a spot that I did not find comfortable for carry. It carries in either LED up, or LED down orientation, and I prefer to keep the bezel in the pocket, to avoid getting the glass dirty. With this orientation, the light just sat too far out of the pocket.

I've been carrying using a Thyrm Switchback, which adds no clip, but uses the finger hole as a place to sit the light on the edge of a pocket. With a Switchback, the light sits lower in my pants, allowing for more comfort, and less "tactical" looking stuff jutting from my pockets. To briefly cover the Thyrm Switchback, it is a device that attaches to the flashlight's tail cap. It allows for better manipulation of the light when used in conjunction with a handgun. It is the new hotness, and it'll be getting a review in the near future.

Battery life on the EDCL2-T is as advertised, however, it is my second gripe with the light. I keep spare batteries in my EDC bag, so I don't mind swapping them, but the light has a poor way of letting you know when to change them. Other comparable lights will stay in the lowest power mode when the batteries are nearly dead. In contrast, the EDCL2-T stays on for about half a second, then shuts off when the juice is out. I really don't like this, and would prefer that the light would be able to use the moonlight mode when low. This is a minor gripe though, as I always have spare batteries nearby.

The Surefire EDCL2-T is a fantastic handheld light. It is big enough for great handling, but still small enough for pocket carry. The lumen and candela outputs are amazing for a two cell light, and the tail cap used here is impressive for its minimalism. My gripes with the pocket clip location and the battery shutoff are merely drops in the bucket, as I find this light to be the best EDC light on the market. Surefire has been making big gains in the lumen wars, and the EDCL2-T is evidence of that.

If you are looking for a new EDC flashlight, the Surefire EDCL2-T might just be your ticket.

The Surefire EDCL2-T carries an MSRP of $179 but currently is available for $129 on Amazon. You can learn more about the light on the Surefire website.

The Surefire EDCL2-T and accessories were purchased at the expense of the author.