Latest Reviews
The Galco Stow-N-Go is a pseudo-universal leather holster with the budget conceal carrier in mind. It features suede construction with a metal reinforced mouth to help retain its shape, and a single polymer clip for attaching to the wearer's belt. Models are available for virtually every handgun on the market, with mine fitting a standard size Glock.

The Stow-N-Go is a simple design; made from a single piece of thin leather sewn into a general gun shape. These holsters fit multiple makes and models of pistols within the same holster to a degree that is impossible with something that has a stronger mold. Not only do the different sizes of Glocks fit within the same holster, but there are even models with cross-compatibility between guns like the Ruger Security 9, Glock 43, and Beretta Nano. 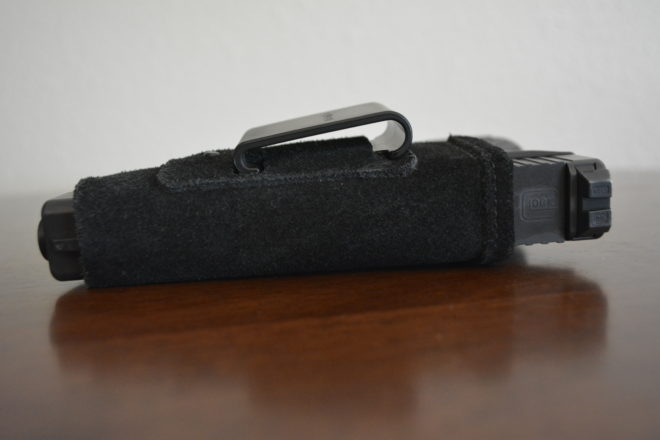 The belt clip fits over the belt, with two small claws to securing it to the underside of the belt. Unfortunately, these claws are very narrow, which can have difficulty staying attached to wider belts. My Magpul Tejas just fits with no issue. My Mission Spec Gibborim proves too thick to reliably retain the claws of the Stow-N-Go. Additionally, there are no provisions to adjust for ride height or angle, though I have no issue acquiring a proper firing grip with this holster.

Those with taller sights, such as the XS F8 or suppressor height need to look elsewhere for their concealment needs. There is no channel in the holster to accommodate these larger irons, which can get caught up during the draw. No provisions are made for slide mounted optics.

The Stow-N-Go uses a small strip of metal wrapped in a layer of leather to reinforce the mouth of the holster. This prevents the holster from collapsing during reholstering, easing the process and increasing safety. Unfortunately, this reinforcing is only present on the slide portion of the Stow-N-Go--leaving the area around the trigger guard noticeably floppy. This is a problem, as the soft leather bends easily. A negligent user could easily press a portion against the trigger, potentially causing an accidental discharge. 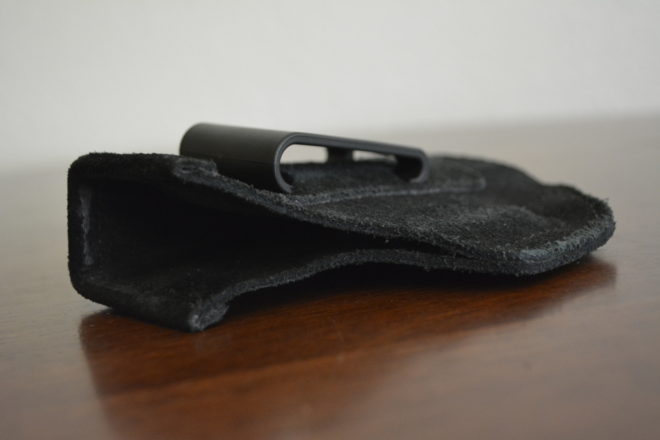 Those wanting deeper concealment will be pleased to find plenty of real estate for both a wedge and a claw. With a Glock 19 and 26, I felt the Stow-N-Go provides adequate concealment, though a bit more certainly never hurts.

Retention is very good. The feeling is more grabby than the distinct "in or out" click you find in kydex offerings. I can definitely feel the suede dragging on the gun during the draw and when holstering. Be sure to keep a thumb pressed against the back of the slide when holstering, as friction pushes the slide slightly out of battery.

Normally I prefer holsters with two belt attachment points to keep the holster in the same orientation during movement. Through a combination of a wide clip, and the grabby suede, the Stow-N-Go has no issues staying where it is placed.

I purchased the Stow-N-Go holster when changing my EDC to a Glock 26, initially carrying it for six weeks. I returned to the Stow-N-Go, this time carrying a Glock 19 for eight weeks, after dumping my T.Rex Arms Sidecar. The Stow-N-Go continually impresses me by how comfortable it is, and with its small footprint compared to kydex offerings. 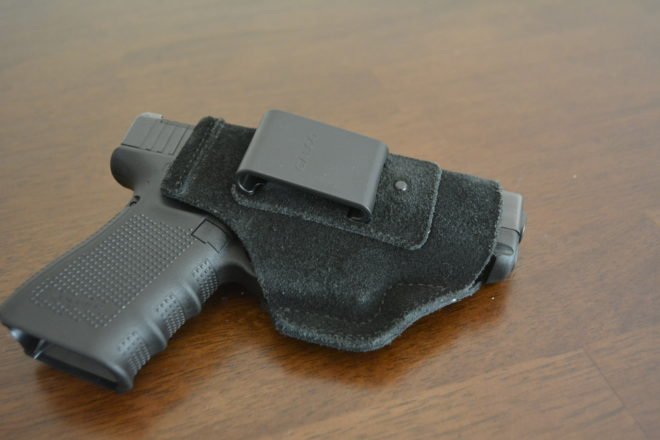 There are some downsides of using leather holsters, aside from living in the past with outdated technology. Residue is left on the slide of the pistol after each draw. The holster also absorbs sweat, which can make things very uncomfortable very quickly. One benefit of the thin leather used here is that it also dries fairly quickly.

Wearing the Stow-N-Go during Shivworks' ECQC I never once had my pistol leave the holster, or my holster leave my belt inadvertently. Despite the downsides of leather, the Stow-N-Go gave me no challenges throughout the three-day course.

The Galco Stow-N-Go is far from perfect, not only for a holster in general but also as a leather holster. That being said, it performs better than most offerings in its price range. I suggest saving your money for a higher quality option such as G-Code or NSR Tactical, but if you need a holster right now and are on a budget, I have no hesitation suggesting the Galco Stow-N-Go.

MSRP for the Stow-N-Go is $36 but you can find it for roughly $28 on Brownells or Amazon.