Since we have revealed what the SAINT is in part 1 of our launch coverage, I can talk about what Springfield Armory had put together for the event. I wanted to let you guys see everything since the whole event was so jam-packed with learning, fun, and plenty of information about the SAINT.

It started with a flight to Las Vegas with little information. Sadly my itinerary was never delivered due to an email problem, so I didn’t even know if there were dinners planned that I should look reasonably decent for. All I knew to be prepared for was outdoor range time, lots of shooting, and a window seat on the plane. 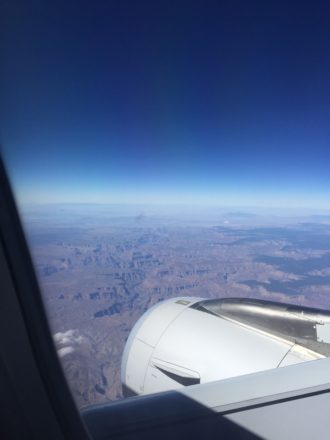 It appears that this is as close to the Grand Canyon I am going to get this year. One day I will make it there.

Once I landed in Vegas, I found that there was a driver and one of the event staff waiting for me at the airport. Once shuttled to the Paris hotel I knew I had a few hours to unpack and work on some pending reviews before dinner at Tom’s Urban about a mile from my hotel in New York, New York. 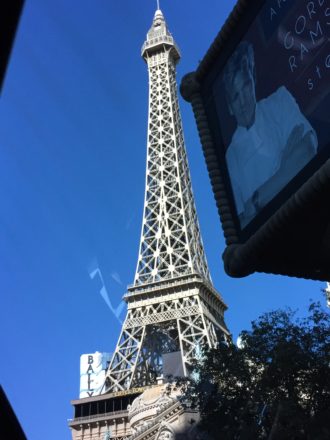 While I was waiting for the rest of the group to arrive, I snuck into the casino and used exactly two dollars of my five dollar gambling budget. In truth, I don’t much enjoy gambling and planned to force myself to try to play some slots while I was there. A short time after I fed the machine a few bills I was left with a forced payout of exactly one cent. Way to go Patrick. Awesome. 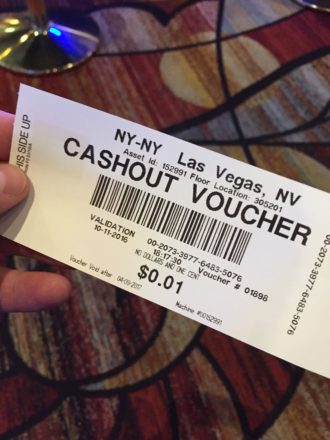 Vegas is a tough mistress.

After dinner, it was back to the room at around 11:30 for a bit of sleep before meeting up with the group again at 7:45 in the morning for breakfast and a quick briefing as to why we were there. There were also forms to sign that included a modeling agreement. Does this mean I am a model now? Sweet!

In reality, this form was needed because the whole event was being filmed for promotional purposes. 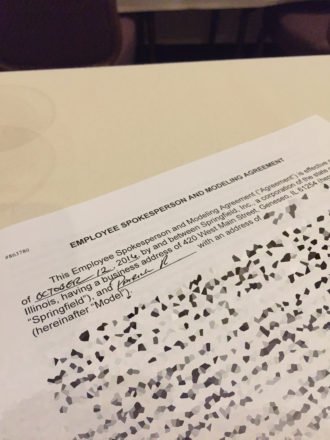 Patrick R. the model. Eat your heart out ladies.

After we were done there it was off to the cars to get the group over to Pro Gun Club Vegas for the first day of shooting. We pulled up at about 9 AM to find none other than Rob Leatham and the crew from APEX Professional Solutions waiting for us. 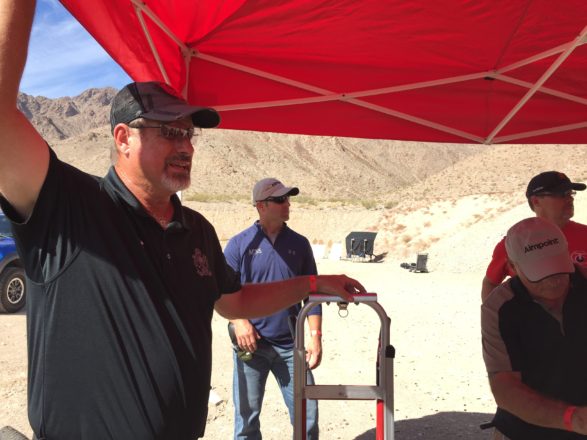 Rob Leatham gave us a safety brief because he would prefer to not be shot. Not being shot is good.

After a short safety brief from Leatham, we put on our provided holsters, loaded some mags up, and were issued the XDm OSP pistol we would be using for the handgun portion of the event.

A quick note about the XDm OSP, there are some things I don’t like, but I don’t have an overall distaste for the guns like I do their older brother the XD. The OSP did shoot reasonably well during the short time I spent on the range with it, I would like to spend some time with a 9mm variant to see if it something I could work into my collection or if the pistol just isn’t for me. 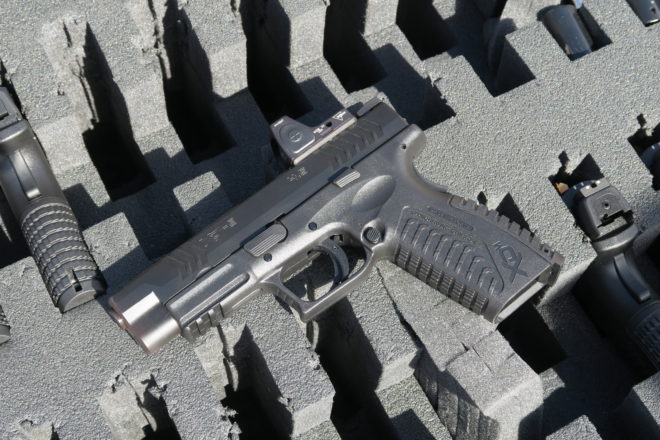 As you might imagine, not being able to shoot a pistol too well and having limited experience with an RDS on a handgun was pretty apparent to Rob. He started working down the line, correcting issues he saw based on several rounds we fired at our own pace. I will talk more about how he worked with each shooter than needed coaching in the last installment of the event coverage. 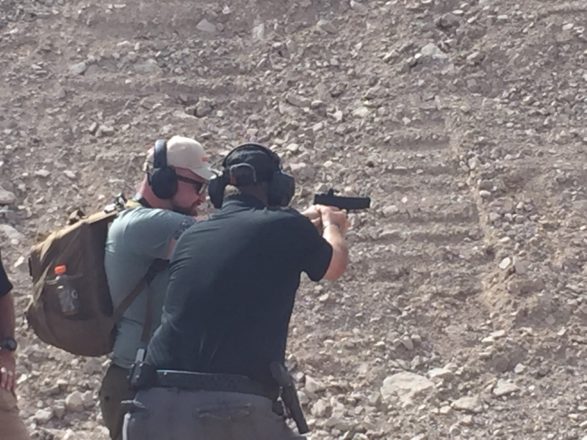 Rob pulling the trigger while the student aims.

Next up was some simple draw from the holster drills on the timer where we would draw, fire, and reholster. Then we moved to draw, fire on one target, transition to another target and fire, then reholster.  After some coaching from Rob, my shooting improved quite a lot.

When Rob walked down the line to check on my process I heard “How’s he doing, is he sucking … Woah my god! Why don’t you just do that, forever?!?” and my friend Bryan with APEX quickly claimed to have shown me how to do that. 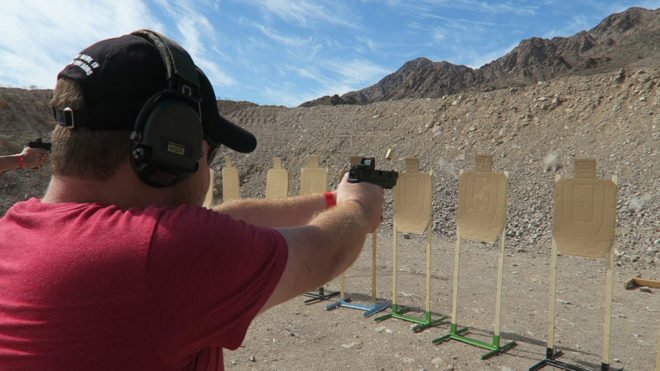 All in the A zone, nice and tight.

Once we had run through the pistol drills, it was a break for a good BBQ lunch at the clubhouse. After we were properly full we headed over to the shoot house to configure our rifles with some quality accessories. 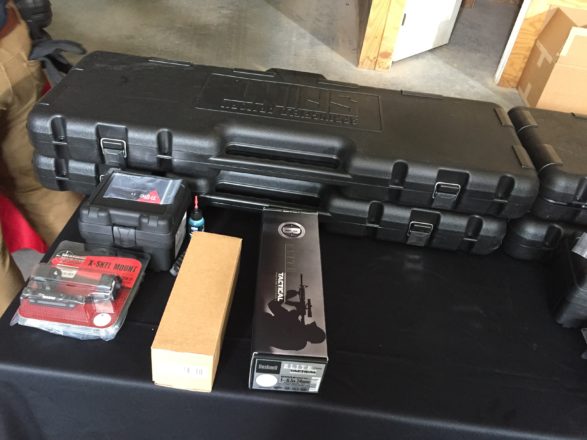 Once we were done there it was back over to the range to zero both of our new rifles. Like I said in part one, the rifle shot tiny little groups with my mediocre semi-supported position. Much better than it should given its sub-thousand dollar MSRP.

It took some of us a while to get our rifles dialed in, some because they were not very good with a rifle, others like myself because someone (Cough Steve Cough) played with the elevation knob before we got over to the range to zero. 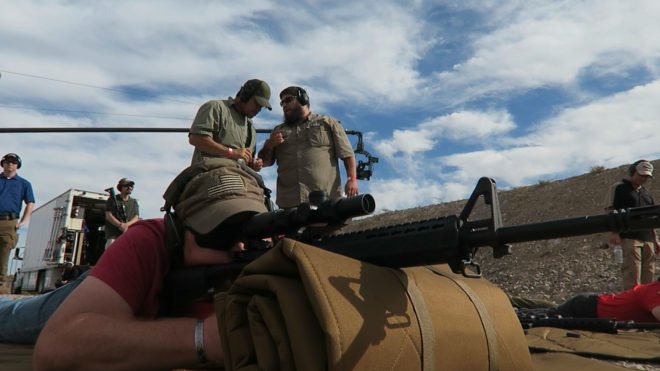 After everyone was hitting where they needed to be, we were told that the next bay held a surprise. We were told to bring gloves and our MRO rifle.

They set something up called “Popper Palooza.” Springfield acquired 100 poppers from Action Targets and set them up in a semi-circle. We were then given 120 rounds in 4 mags to knock them all down while being timed by Rob Leatham. 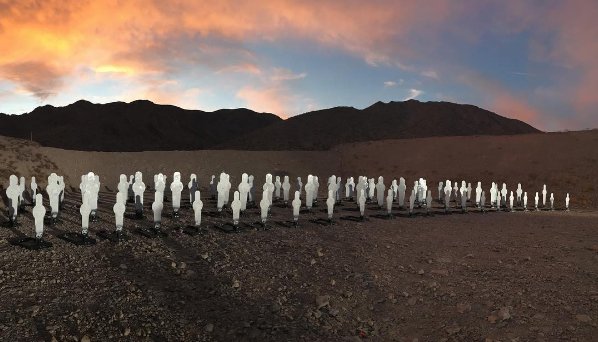 Photo courtesy of Funker Tactical, I was too excited to take one.

Given I have never shot competition or taken an instruction class, I expected to be on the slow side. I volunteered to go first to get past the embarrassment of sucking, I also wanted to shoot while the sun was still high enough to give me good light.

The rules were simple, 120 rounds to knock them all down and a 10-second penalty for any popper left standing.

Much to everyone’s surprise, including my own, I was able to knock all 100 poppers down in 67.47 seconds with 4 rounds remaining. Even more surprisingly I remained in first place all the way to the end. Most other writers were shooting times of 80 seconds plus, some over 100. The very last shooter stepped up to the line and burned out a time of 61.xx seconds and finished with one round remaining.

Damn. Still proud of myself, second isn’t too shabby when you are talking about 16 shooters who literally make a living working with guns.

For reference, here is the Springfield video with most of the writer’s times.

Since the sun had gone down, there was nothing left to do but go back to the hotel and grab a bite at Beer Garden, wind down, prepare for the next day, and try to sleep. I was going to need it, after all, the marketing folks for Springfield warned me that tomorrow held the “holy shit, that is awesome” event.

Check out the Springfield Armory SAINT over at the Defend Your Legacy website HERE.