With day one of the SAINT media event out of the way, we met back up at the Paris hotel’s valet at 8 am and loaded back up in the Springfield vehicles. A short drive later we pulled up at Pro Gun Club Vegas clubhouse for breakfast. Next up was a quick briefing by Rob Pincus about his reality-based training program. Mind you we only got a condensed version, but the take away is to avoid confrontation but be prepared to protect yourself and the ones you love. 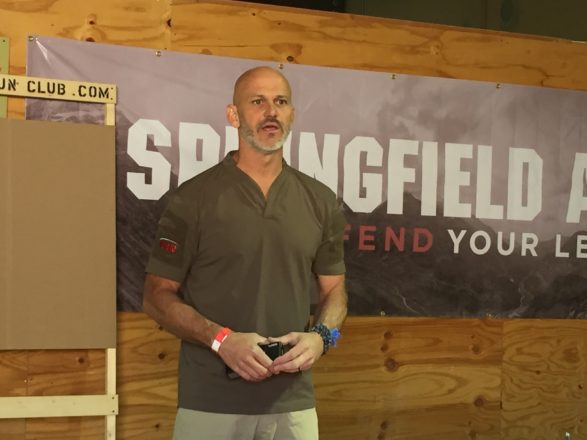 After the presentation, we were broken into two groups for the next segment. I was in the first group and would remain with Pincus at the shoot house; group two went up to the range to work with the APEX crew to learn how best to utilize the SAINT around a vehicle. Before you skip ahead, each group only had time to do one event meaning I missed out on the vehicle training. A damned shame, I got a glimpse of the range setup, and it looked like it would have been very informative. 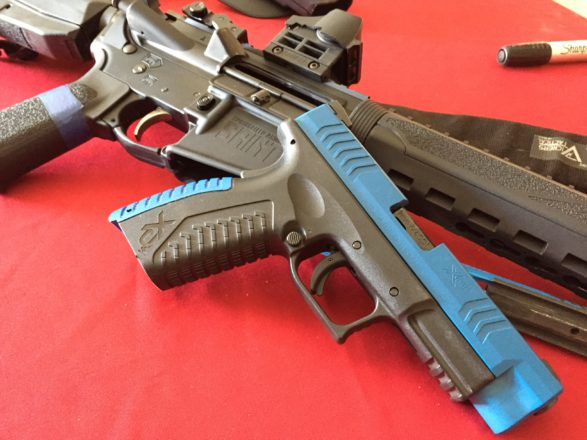 After group two had scurried away to their range, Rob spent more time covering possible scenarios, what he felt was the proper response to those scenarios as well as his guidelines for dealing with a threat.

Evade, barricade, arm yourself, communicate, and respond. Evade, barricade, arm, and respond are pretty self-explanatory, but what did Rob mean by communicate? Broken down into simple terms he said you should communicate with friendlies around you, call 911 and provide key information (location, what is going on, description of yourself, that you are armed, and a description of the threat if you can) and lastly, only if your position is known to the threat, communicate that you will defend yourself. 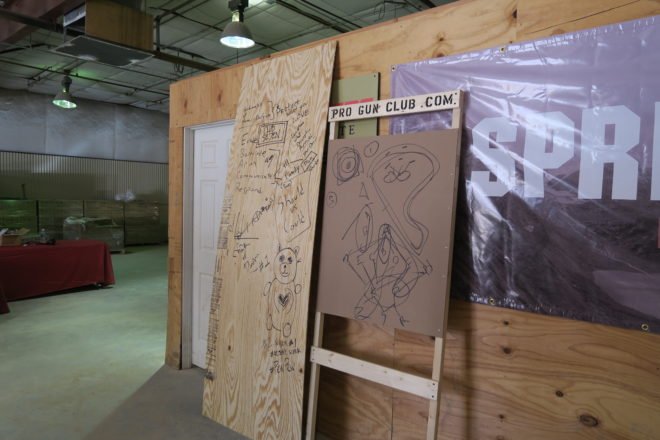 We were patted down twice to ensure that we didn’t possess anything that could be used as a weapon, then given a quick walkthrough of our new “house.” While waiting for everyone to finish being checked, I snapped a photo of my group and walked the “house” to learn the layout. (Not a bad photo even if TTAG tried to ruin it.)

The layout was pretty straightforward; Rob designated a bedroom, living area, front door, and hobby room for the scenario. 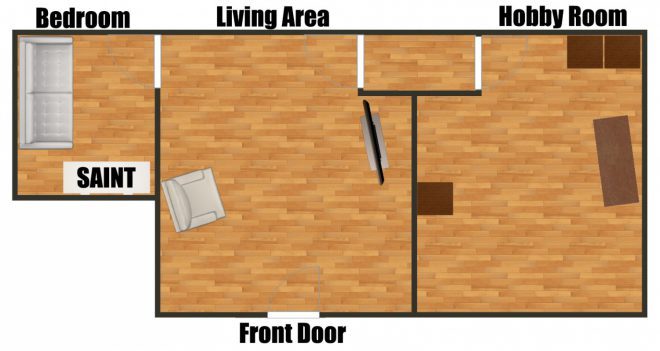 On the first run, we were home alone and watching TV in the chair when someone starts banging on the door. At first, I didn’t hear what was being yelled until I had barricaded myself in the bedroom, threw the couch against the door, and armed myself with the SAINT sims gun. I found that I lost track of the steps on the first run and forgot to call 911. I also didn’t focus on what was being yelled by the man at the door until after the trainer said something. I was so focused on the door in front of me that I lost track of everything else.

A valuable lesson learned. Don’t focus on a singular objective like shooting the bad guy, pay attention to everything going on around you.

After the first scenario, I geared up for the SIMS scenario with headgear, a padded hood, neck protector, gloves, a groin protector, and a long sleeve shirt. Jeremy S. from TTAG (despite being funny looking, turned out to be a pretty cool dude) was kind enough to snap a photo of me getting geared up. I will say, the padding dulled my senses quite a lot making the scenario much more difficult. 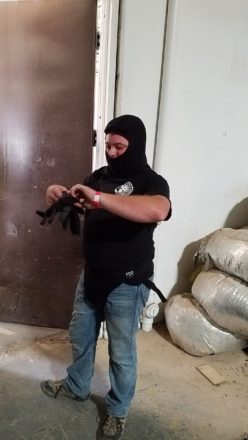 The second scenario was laid out much the same as the first one, but this time my significant other would be in the hobby room doing wife things. As a result of the added person to think about, my plan changed quickly. Once the banging on the door started and I determined it may be a threat, I armed myself and went towards my wife in the hobby room closing doors as I went.

Once I placed my wife in a protected position, I his in a corner with my rifle trained on the only door leading into the room. Again, I forgot to have my wife call 911 until she asked from behind the safety of the filing cabinet. Once the gunman came through the door, I shot him in the side with the Force on Force projectiles until he fell and stopped moving.

My second scenario was much cleaner than the first, and I found it easier to understand what needed to be done and how. I wasn’t able to get my run on video, but RECOIL magazine’s HMIC Iain let me film his time in the shoot house. Even though the gunman got a shot off, Iain put the bad guy down just the same.

Once all the shooters had cycled through the second time in the shoot house, we headed back to the clubhouse for lunch. Iain and I finished eating before the others, so we headed up to the rifle range for the next training block only to be told it was to be canceled because the shoot house had taken far longer than they expected. Damn.

We were informed that we would be heading to Boulder City Rifle Club (the same range that hosts Industry Day at the Range) for the next portion of the event, and frankly the most enjoyable so far. We would be working with Bryan from APEX Professional Solutions to learn how to use the SAINT most effectively at ranges past 100 yards.

Bryan made a career fighting in some tough places with some of the most elite warriors on the planet. Given where the fighting has been over the last decade or so, I think we can call him an authority on using an M4 style rifle on targets at a distance and up close. Above all of that, he was a joy to work with just like the rest of the guys from APEX; Pat, Steve, John, and Chuck. All of the trainers had varying backgrounds with the common theme of being some high speed, special ops type of experience. 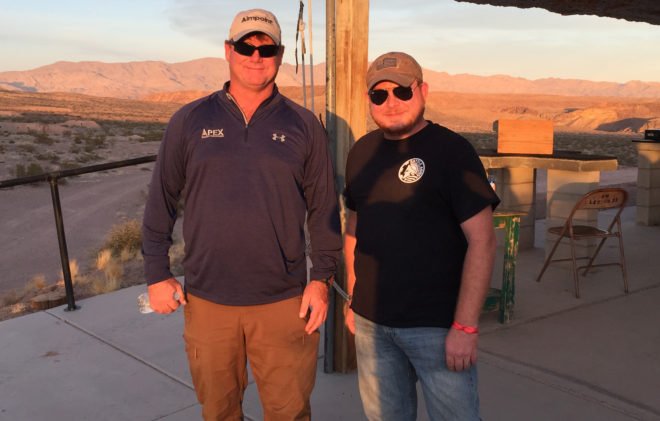 The Springfield team had set 12″ steel plates starting at 50 yards all the way out to 300 yards. We started by verifying we were more or less on target at 100 yards, then were given free reign over any steel target on the range. After shooting at the Springfield placed targets, I found myself a bit bored of landing hit after hit and asked for a spot on the 960-yard gong. Three misses to walk the shots in and I was hitting the gong almost every trigger pull. Given that Rob Leatham said that the rifles were around a minute and a half rifles, I was pleased with being able to hit the plate more than once. 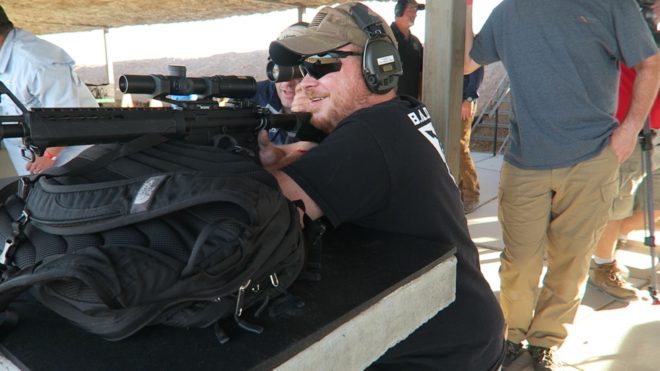 As much as I wanted to sling more lead at ranges the SAINT flat wasn’t designed for; we had dinner reservations back in Vegas that we had to make. We still had the big event to go. What the hell could it be? The sun was setting, and we were all starting to get a bit tired, only something big would get the group fired up again. We only had about half an hour before we were due at the next location, so a hurried dinner and back on the bus it was.

I was ready for a nap when I looked out the window when the bus stopped and saw this sign. 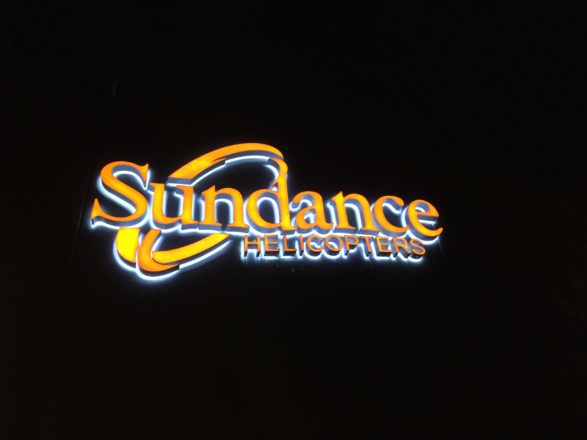 Springfield, you now have my full attention. I was fully awake and ready for anything. We unloaded, checked in, and got a quick brief from the pilot. After loading up in our helicopter we flew up and down the Vegas strip, then straight out to Pro Gun Club Vegas where we landed in the parking lot. 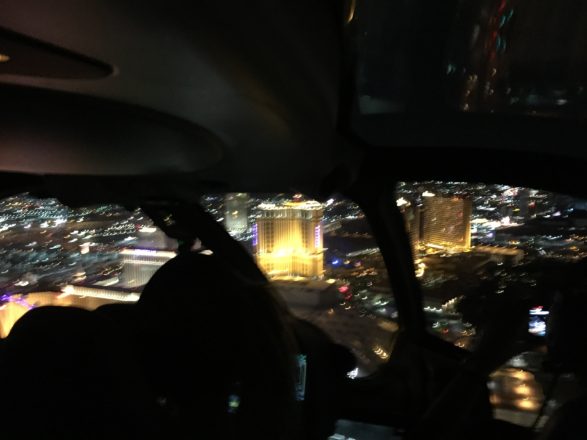 Just when I thought the helicopter ride to the range was the exciting part, we were shuttled up to a rifle range where what we saw was best summed up by my new friend Jeremy “What the eff is going on here?”

I didn’t snap a single photo of the chaos scattered all over the range, once we got out of the trucks we were told that the video would be made available to us so I forwent the photos. What was laid out in front of us was hundreds of zombie gnomes holding a pound of tannerite each. Other target included inflatable lawn decorations, larger tannerite packages, foam silhouettes with tannerite in their head, and two taxi cabs with a bunch of tannerite in each one.

We lined up with our Bushnell equipped rifles then walked through some smoke from a smoke machine with purposeful looks on our faces. Once lined up on the firing line, we loaded up, took aim, and started shooting. With all the explosions and smoke, the only thing I found myself doing was searching for the next target and shooting till the mag was empty, reloading, and looking for the next gnome. 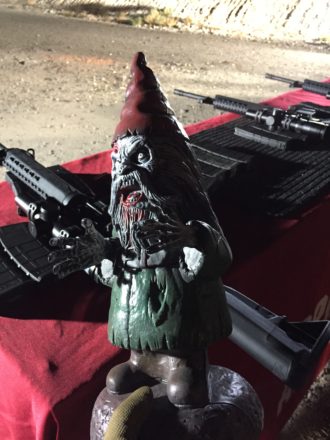 With all the explosions and smoke, the only thing I found myself doing was searching for the next target and shooting till the mag was empty, reloading, and looking for the next gnome. Once we ran out of ammo there were still dozens of targets left, no doubt the event staff had a hell of a time “disposing” of it.

Since was so focused on shooting, I snapped pictures when I thought about it. 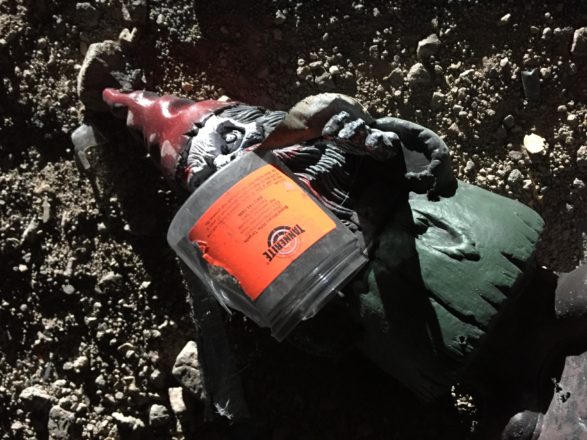 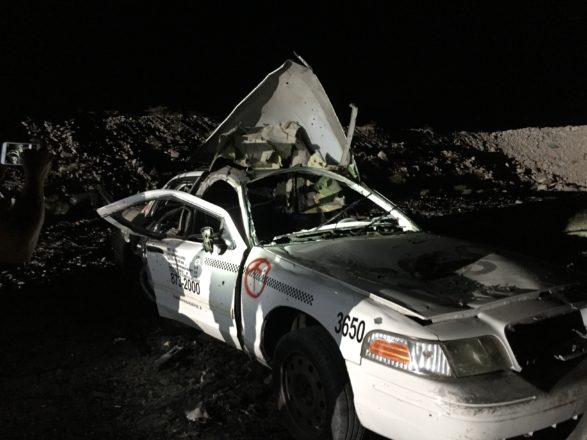 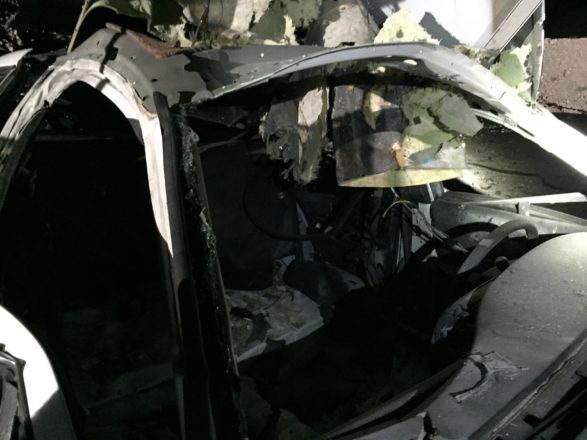 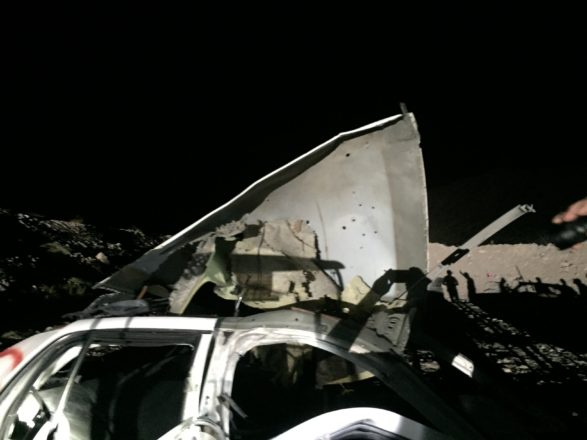 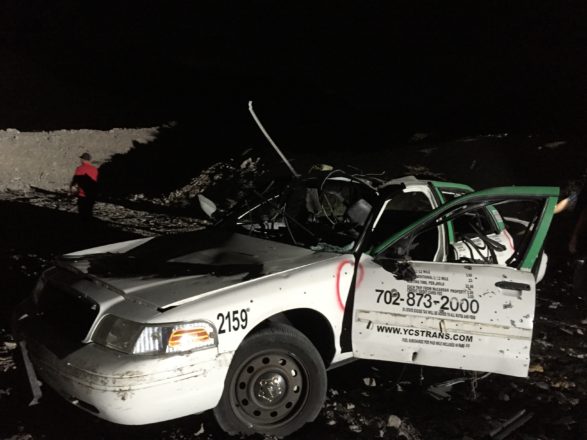 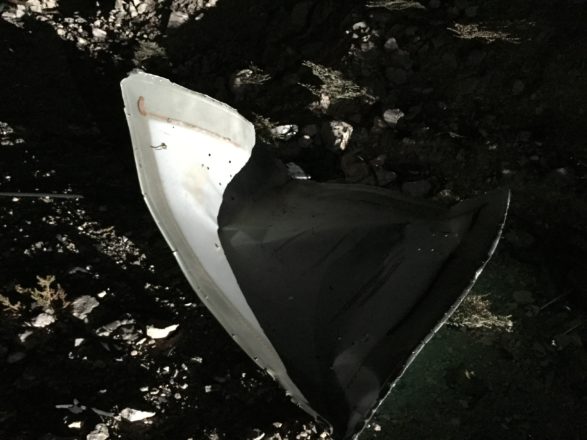 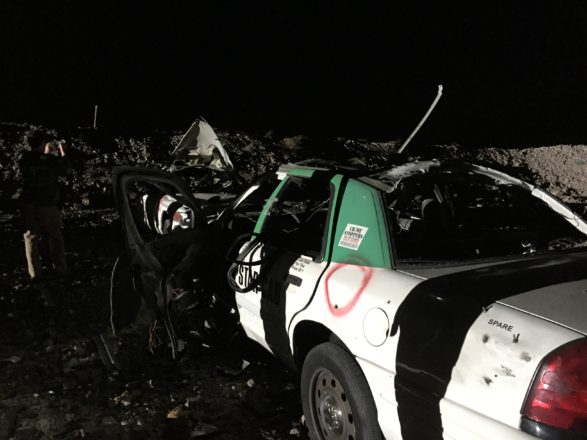 The final event was well worth the wait. Hats off to Chad, Denny, Stefany, Drew, Steve, Bryan, Pat, John, Chuck, Rob Letham, Rob Pincus, Barret Kendrick, Action Targets, Federal Ammunition, anyone I might have forgotten, and the rest of the Springfield Crew. 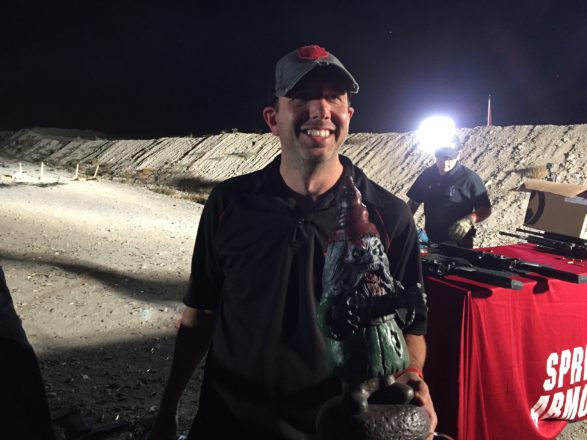 All of us writers had an amazing time and the event was really well put together. Like Chad said, I don’t know how Springfield could top this one, but I would sure love to see them try.

Check out the Springfield Armory SAINT over at the Defend Your Legacy website HERE.

This post originally was run on The Firearm Blog – http://www.thefirearmblog.com/blog/2016/11/01/launch-coverage-springfield-armorys-saint-day-2-part-3-3/