Just a few hours ago Larry Vickers released a teaser video of his new special edition Lipsey’s Glocks that are to be formally announced tomorrow, but it looks like someone might have spilled the beans. There is the possibility that the retailer made an assumption about what the new LAV Glock is going to look like, but the photos lead me to believe that they are accurate.

Before we get into the photos, take a look at Larry’s teaser video below. Larry Vickers will be announcing the new limited edition pistols on Facebook tomorrow at 9 AM CST.

As for the possible leaked photos by Glockmeister? They sent out an email with a page to pre-order the new Glocks directly from them before the planned announcement with Lipsey’s tomorrow. The images appear to be genuine at a glance, but the absence of a Glock 19 photo is a bit of a head-scratcher. I won’t speculate; you can decide if they are genuine.

LAV did come out and say that the leak was not official. He does say that they have the wrong photo, I believe he is talking about the lower right photo that is clearly a standard Gen 3 frame. 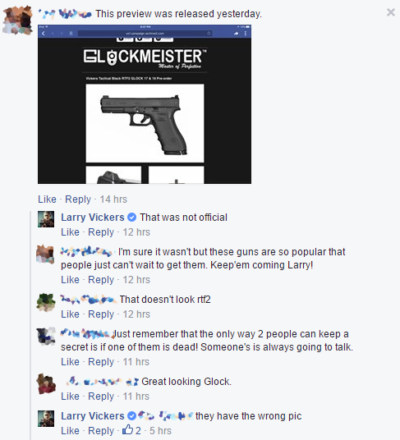 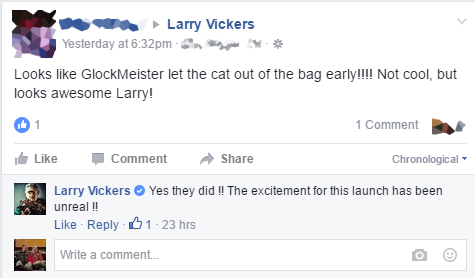 So what should we expect with the limited edition Glocks? The Glockmeister pre-order page lists them as having Vickers Elite Battlesights with a gold bead front, 2 Vickers baseplates, Vickers slide stop, Vickers mag catch, and Vickers butt plug. They go on to say on their web page that the details may vary, and finalized specs will be released tomorrow at 9 AM CST on Larry’s Facebook page. 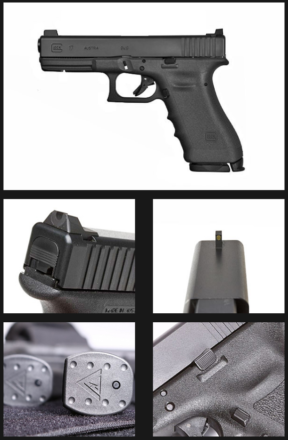 The Roland Special | The Best Duty Glock Ever?

The Roland Special is a concept of pistol that has become popular in some small circles of professional users (primarily among members of Primary & Secondary) that [...]

ZEV Technologies are known for their higher end firearms, parts, and accessories. With a distinct visual flare, ZEV gear is hard to miss on shelves [...]