A few weeks ago we blogged about the Kickstarter that ProSounds is running to launch their new M-Series line of muffs. We liked the features that the M-Series offered and got a chance to put the top of the line M-4 Electronic Hearing Protection through the ringer. The M-Series offers a lot of high-end features in an attractive price bracket, the question remains as to how well the high-end features work together. Only one way to find out.

The muffs that they sent us had the old SportEar branding on it, the new ones shipping from the Kickstarter will feature the ProSounds name. The ProSounds people have assured me that everything else will remain the same. At a glance, the muffs look a lot like other popular electronic muffs, but if you take a closer look you see the little features that set the M-4 muffs apart like 4 microphones, independently adjustable volume, and two 3.5mm input jacks that set it apart from competing ear muffs. 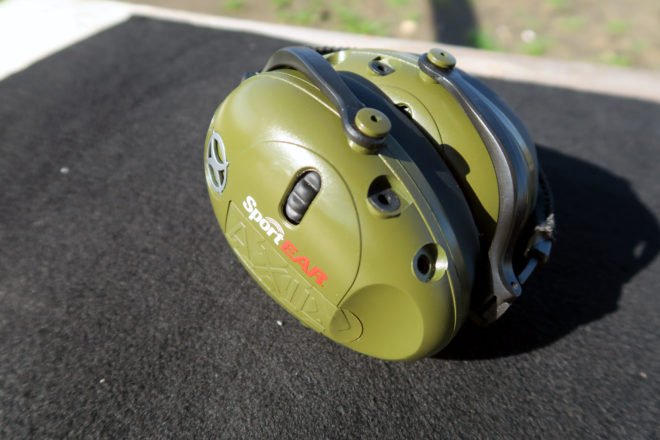 The M-4 muffs fold a bit different than most other muffs on the market. It took a bit of getting used to, but I found I kind of liked the way they fold. 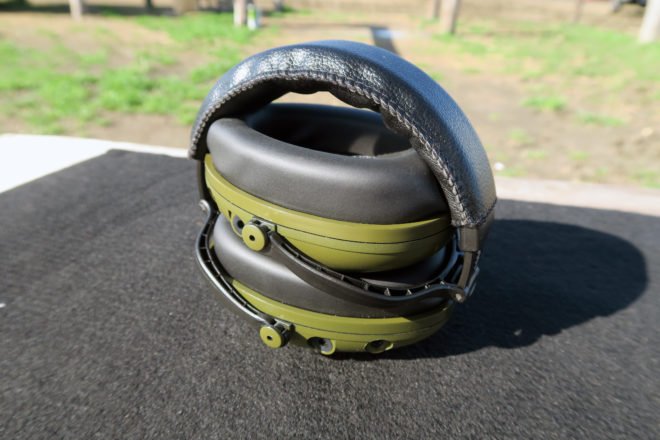 The ProSounds M-4 muffs came with the required 4 AAA batteries, I am not sure that the Kickstarter muffs will come with batteries or not. Each side has its own identical battery compartment as well as a separate volume adjustment. I found it interesting that ProSounds treated each ear cup like a separate entity instead of part of a system. The earmuffs muffle all sounds over 85dB but allows you to boost sounds under that as much as 6 times the normal. 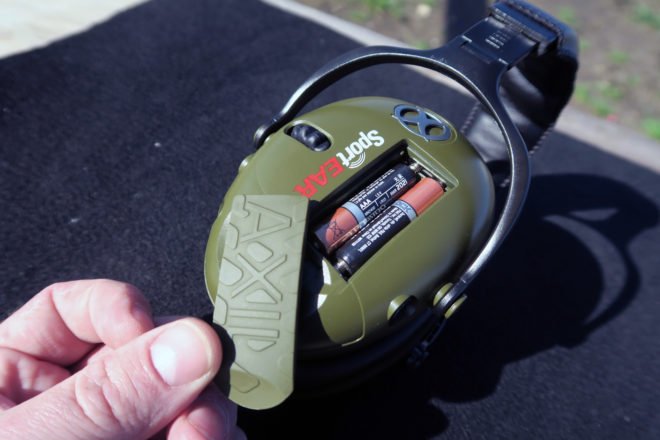 The black circles that you see on the body of the muff happen to be 2 of the 4 microphones on the muffs. You might notice there are no windscreens on the microphones. I did experience some wind noise as a result. The high winds on my range created a repetitive popping sound that I have not experienced on other electronic muffs and found rather distracting. The popping was loud enough that it activated the electronic 85dB cutout making it impossible to hear normal conversation. I did wear the muffs for a long period in my backyard and did not experience any of the popping with little to no wind. In a shooting bay or somewhere where high-speed straight-line winds are not present they wouldn’t have any issue at all. 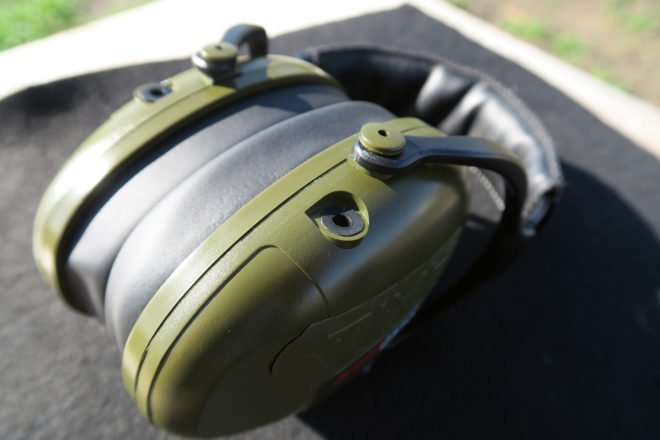 The ear cups house the speakers and the electronics behind the foam. The ProSounds people tell me that the circular part houses the speaker and the other foam section houses the electronics that allows normal conversation under 85dB to pass through but still blocks out harmful noises like gunshots. 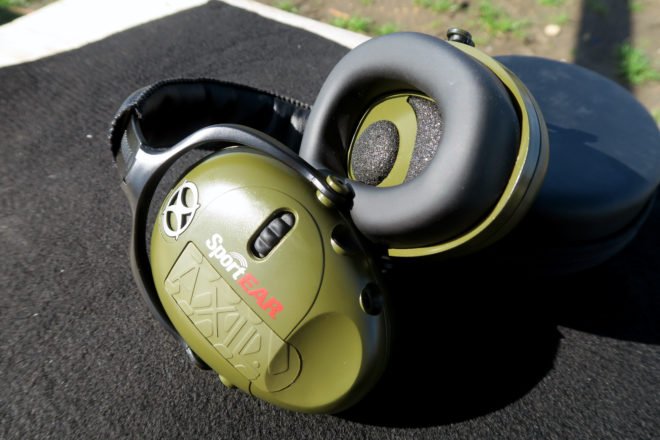 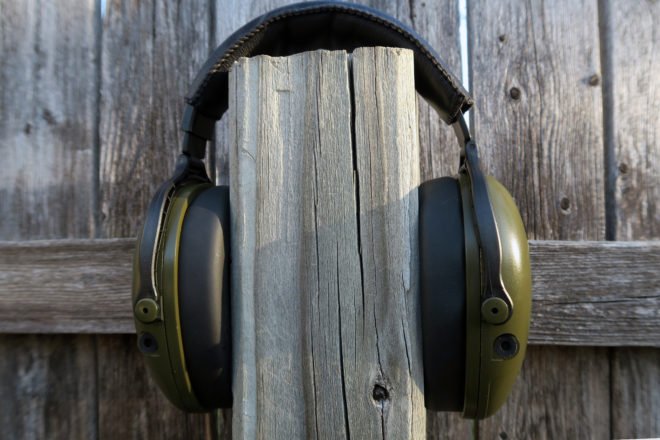 Each ear cup has its own 3.5mm jack so you can pipe whatever you like into your muffs. Plugging something into the 3.5mm jack cuts the mics out on that side and the speaker will play whatever is being fed into the ear cup. The ability to use the muff’s two inputs to run two radios at the same time while protecting your ears is kind of an interesting feature that might be useful to some professionals. 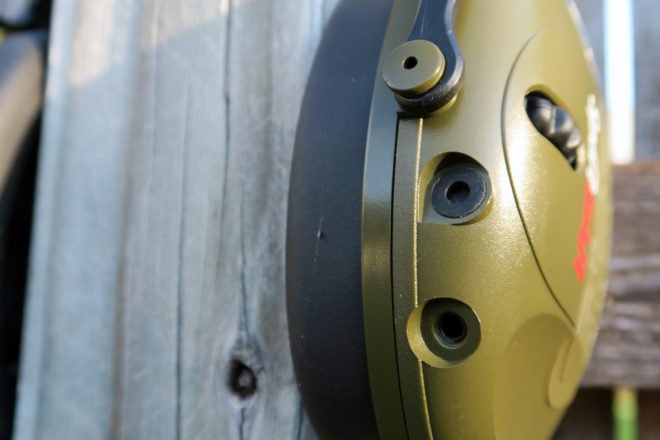 I found the muffs were low profile enough for me to get behind a rifle and really tuck in without the muffs being pushed away from my ears. I wasn’t able to get photos of shooting prone as a result of the epic amount of mud on the ground, but I did try it at home and had no issue tucking in behind a scope. The ear muffs did a wonderful job of blocking out the sharp crack of gunfire when coupled with some earplugs, not that I felt like it was necessary but is a habit of mine. 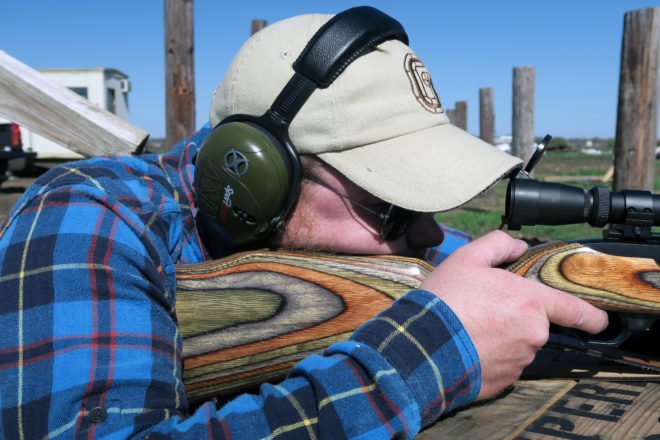 My friend Mike gave them a go and said they fit his melon wonderfully. He was able to nestle right up to his Gunsite Scout without any interference with the stock. The snug fit means they didn’t even move under recoil a bit. 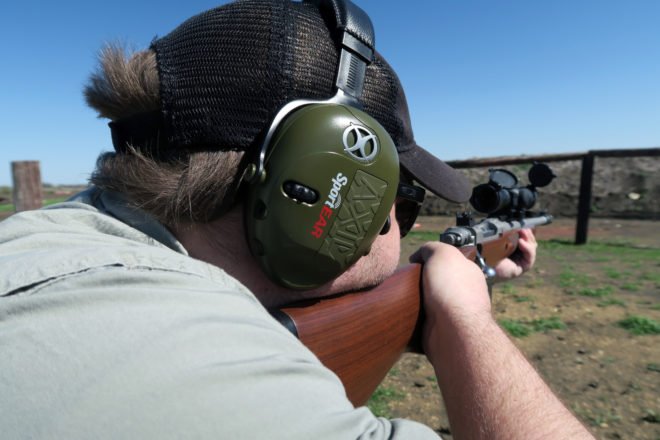 Mike was pleased with his shooting as you can tell by his grin forming. After shooting that Gunsite Scout of his I fully understand the doofy smile, that is a really cool bolt gun that I am going to have to take a closer look at in the future, it may very well be the ultimate truck rifle. 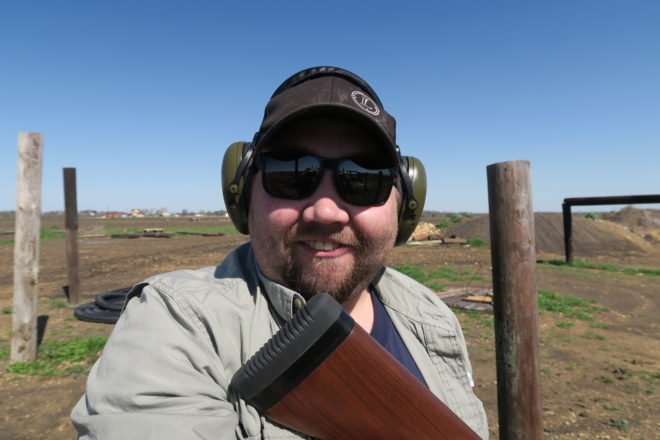 I think that the ProSounds M-Series has great promise if the wind isn’t much of a problem at your shooting range. After playing with them in an area shielded from the wind I was amazed at the level of detail my ears could pick up. I was even able to pinpoint where around me the noise was coming from, something that hunters will love. The electronics are truly impressive and anyone that is lucky enough to pick up a set will be pleased with them.

This post originally was run on The Firearm Blog - http://www.thefirearmblog.com/blog/2016/04/07/review-prosounds-m-4-electronic-hearing-protection/