Bring on the Masks

I work part time at a gun range and the first day I worked after masks became mandatory in our city was really eye opening.  It’s more than a little unsettling having so many people running around in masks. Especially in a gun store. Just a few short months ago coming into the store wearing a mask might get you tackled or even shot. Today it’s a common thing.

Until everyone, including myself, was forced to wear a mask I had never realized how much I depended on my charming smile to disarm agitated clients. I’m not a big chit-chatter. I find a few words and a sympathetic smile go much further than excuses or pandering prose. Losing that ability made me hyper aware of all the other tools masks have taken away.

For starters, masks are distracting. They limit our vision and force us to focus on doing small tasks instead of what’s going on around us. That means we are trying to work around our masks to do simple tasks like dig our credit cards out instead of noticing what is happening in our environment. Masks also make it harder to read other people’s intent. For those reasons it’s critical that we try to pay more attention to other cues.

Facial expressions are an important part of human interactions and conversations. We rely heavily on being able to see people's faces as a part of determining their intent. This lack of face to face contact is why so many phone calls and emails escalate into misunderstanding.

A 1971 study showed that people from different cultures all used similar facial expressions to show 6 distinct emotions: anger, disgust, fear, happiness, sadness, and surprise. Other studies have shown that people blind from birth use the same facial expressions, indicating that they are evolutionary in nature and not learned.

What to Watch Instead

Since mask wearing effectively takes away our ability to observe other’s facial expressions what are some other things we can watch? Perhaps one of the most important things to watch when trying to read someone’s emotions or intent are the hands. Many people have developed the ability to control facial expressions, but our hands seem to have a mind of their own. Are the other person’s hands balled into fists? This is a good indicator of anger or that they intent to hit something or someone. Are their hands in their pockets? This could indicate the presence or a weapon or a relaxed state depending on the presence of other indicators. Open hands with palms facing out is a calming gesture indicating the person isn’t looking for a fight. 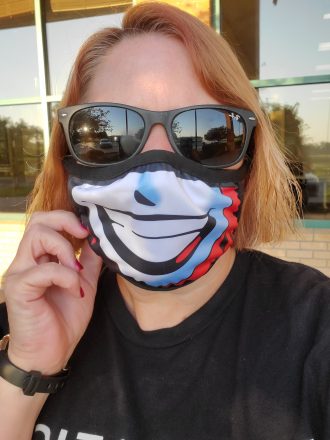 Feet can be another good indicator. Pay attention to what direction the feet are pointing.  Are they standing in a fighting stance? If their feet are turned away from you, they may be planning to flee either to avoid conflict or after attacking. Shoulders are another important thing to pay attention to. Are they relaxed or tense? Is the person trying to flex and make themselves look bigger? Are they squared up for a fight? Also watch for indications that the person is under the influence of drugs or alcohol. Are they shaking or have slurred speech? If the person is looking around excessively, they may be looking to see if there are witnesses present before doing something harmful.

Don’t get so wrapped up in watching people that you miss important environmental cues to potential danger as well. When out in public watch for crowds starting to gather. The larger a group gets the greater the chance for problems. Listen for things like raised voices or tires squealing. Pay attention to the smells. Is something off? Do you smell smoke or chemicals?

One of the most important things to do is watch for the presence of weapons. Armed protests are on the rise and could lead to problems eventually. In a recent post to his Violence of Mind Facebook group, Varg Freeborn discusses this very concern. He points out how comfortable people have become brandishing weapons at the slightest provocation. Varg believes that eventually this could lead to a shooting match between opposing factions. You definitely don’t want to get caught in the middle of that.

Some Other Things to Consider

There are a few other things you might want to consider related to masks. Masks give people a certain level on anonymity. This seems to embolden some people and make them more aggressive. It’s similar to the anonymity we see with comments on the internet. If someone is trying to start trouble with you your best option is to not engage or to disengage if things escalate.

Mindset is very important as well. One of the things Varg Freeborn talks about is know your mission. At the end of the day my goal is always to make it home safely after whatever I have been doing. I don’t need to engage people in things that do not concern me, and I certainly don’t need to end up in the middle of a riot or gun fight.

It’s not enough to simply recognize a potential problem. You also need a plan to act. If you’re with your family do you have a meeting place if you get separated? Are they aware of your capabilities in a fight? Do you know theirs? Does everyone know how to recognize potential danger and take action? Does your list of tools include less lethal methods such as pepper spray? Have you trained in the use of all your tools? Weapons aren’t magic talismans. You must train in their deployment. Most importantly, trust your gut. If something feels off or wrong, leave. It just isn’t worth it.

I see a lot of people claiming they can’t wear masks because of some undisclosed medical issue or anxiety. If I were you, I would use caution when claiming anxiety or other issues to get out of wearing a mask. I get it, I hate them too and only wear one when required. However, consider the fact that someone could use your claim of mental health issues or anxiety against you in red flag situation. You don’t owe anyone an explanation. If you can’t or don’t want to wear a mask go somewhere else. Don’t engage in a war of words that could result in the loss of your Second Amendment rights.