BLUF: If you want to win two World Wars or Operate like a true Operator, then look no further than a Springfield Armory 1911

Like any good American, I’ve always been attracted to the 1911. It has a long and storied history in both military and private use and is one of John Moses Browning’s most prolific designs. I had just wrapped up basic training and tech school, with nine months pay burning a hole in my pocket when I found a brand new Springfield Armory MC Operator at a local gun shop.

It was love at first sight.

The MC Operator comes equipped with an accessory rail, rubber wrap-around Pachmayr grips, and a unique black and green finish. In the case you'll find two flush fitting 7 round magazines, a polymer holster, dual magazine carrier, cleaning brush, and about as much paperwork as my UIF. Standard safety gear, a cable lock and small key for the internal lock, are included for lawyer satisfaction.

The rubber grips offer a solid purchase, but add a significant amount of bulk, I opted to swap mine for a set of Magpul MOE grip panels. Of note, the front strap is completely smooth underneath the Pachmayr grips; some skateboard tape here will add a little extra traction for those slippery moments.

The safety is ambidextrous with the right side being slightly smaller. For you Instagram operators, forward slide serrations allow you to press-check to your heart's content. Sights are Novak style with tritium inserts from Trijicon. Five years later they are beginning to dim but are still plenty bright in low light conditions.

The combination of a match grade stainless barrel and an excellent trigger lend themselves to fantastic accuracy. Despite shooting this gun significantly less than my EDC pistol, a Glock 19, I maintain similar levels of accuracy with the MC Operator and sometimes better. A factor that strongly makes me consider changing up my daily carry loadout.

Some people may complain about the single stack magazines, typically limited to 7 or 8 rounds from the factory, with a few solid options for 10 round magazines. Of course, as we know in the 1911 community, you only need a higher capacity pistol if you can’t hit what you’re aiming at.

Another complaint is the weight, the MC Operator comes in at 43 ounces with an empty magazine. We intellectuals know that the additional weight helps reduce felt recoil and allows the 1911 to act as an excellent bludgeon if you need to crack some Kraut skulls on your way to Berlin. If it's too heavy for you, hit the gym.

One big red flag on this gun is the inclusion of an internal lock. Springfield supplies a small key to lock the pistol from firing, much in the way that Smith & Wesson does with their firearms.

In retrospect, had I known this small detail prior to my purchase, I probably would have gone with another 1911 manufacturer. It has not caused me any problems, but I am one of the few who have had an internal lock activate under recoil with an S&W firearm. The fewer mechanical devices to go awry, the better.

Such a Clean Old Man

Finally, we hit reliability. The undying meme for the 1911 being a jam sandwich. Personally, I’ve never experienced a malfunction with my Operator, but I’ve also never carried it concealed or used it in environments dirtier than your typical range. For practice ammo, I've used Blazer aluminum, Tula steel case, and too many brass rounds to list. For defense rounds, I've had success with 185gr Gold Dot, 230gr HST, and 165gr reduced recoil Hydra Shok.

Much like a supercar, the 1911 is a performance piece of machinery. Treat it right, and it’ll run like a dream and look good doing it; treat it like a Corolla and you'll have an expensive paperweight.

Read an article or watch a video from renowned 1911 experts like Larry Vickers or Ken Hackathorn and they will be the first to tell you that the 1911 will let you down more often than a modern polymer option, especially if you give them the same level of treatment.

Despite some nagging safety "features", the Springfield Armory MC Operator is an excellent handgun when used properly. If you want to join the ranks of the elite, having God and John Moses Browning smiling upon you, then the 1911 is what you need. 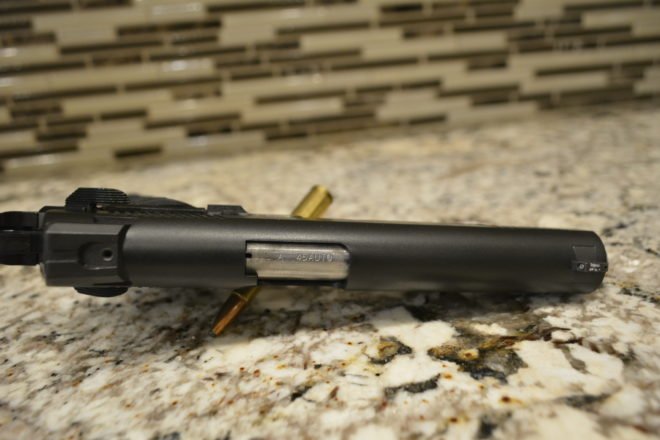 Like Loading...
About Daniel Reedy 290 Articles
Daniel holds instructor certifications from Rangemaster, Agile Training & Consulting, and the NRA. He has received training from Craig Douglas, Tom Givens, and Steve Fisher among others. He also has experience competing in USPSA, CAS, 3 Gun, and Steel Challenge. In his free time Daniel enjoys petting puppies and reading the Constitution. His work is also published by AmmoLand, Recoil Concealment, and Air Force Times. Daniel has also written and edited for The Kommando Blog.